Gil Verrelli, Torri Lynn Ashford, and Rainjana Haynes perform in Combined Insurrection/Resurrection Services in the Pine Forest at Bread and Puppet Theater, Glover on May 30. 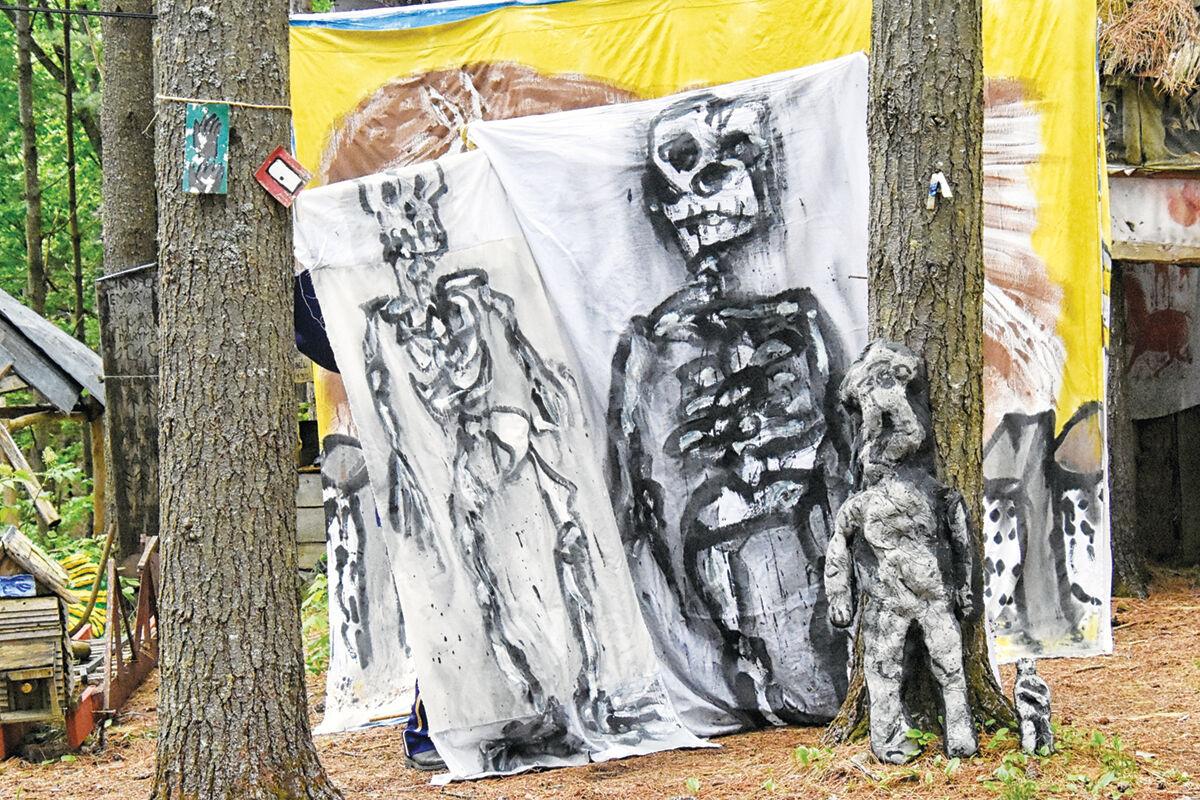 Amelia Castillo and Rainjana Haynes perform as skeletons that rise from the earth at Bread and Puppet Theater. 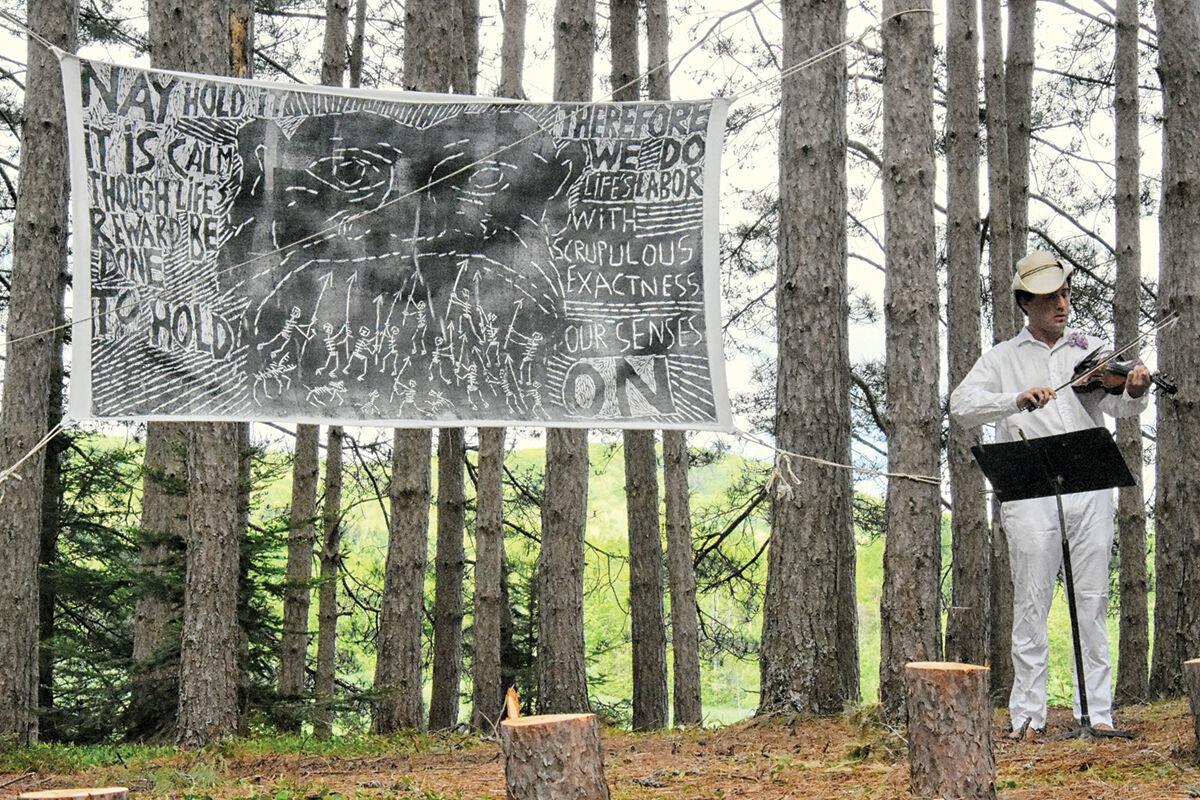 Joshua Krugman performs a “fiddle lecture” calling for insurrection, resurrection, and lamentation for the “thousands of unnecessary deaths caused by both police and virus.”

Gil Verrelli, Torri Lynn Ashford, and Rainjana Haynes perform in Combined Insurrection/Resurrection Services in the Pine Forest at Bread and Puppet Theater, Glover on May 30.

Amelia Castillo and Rainjana Haynes perform as skeletons that rise from the earth at Bread and Puppet Theater.

Joshua Krugman performs a “fiddle lecture” calling for insurrection, resurrection, and lamentation for the “thousands of unnecessary deaths caused by both police and virus.”

Performing arts bring the public together. But when a respiratory infection circles the country – and the globe – gathering can pose a threat.

In Vermont, venues are working to navigate the current challenges while looking to the future.

It was with heavy heart that staff at the Flynn Center made the decision to cancel all in-theater performances for the remainder of 2020.

“It hurt to do it because we’re in the business of getting people together and COVID makes that the enemy,” said Steve MacQueen, the Flynn’s artistic director. “We can’t do it. It’s a public health issue and we can’t guarantee the safety of an audience.”

The show might go on, though. MacQueen couldn’t share specifics without finalized plans, he said, but the Flynn is planning events outside of its theater for the summer and into the fall.

“We’re not done connecting with the community through the arts. We are done for the moment presenting performances in our theater,” MacQueen said.

Without a vaccine for the coronavirus, questions cloud what the future of gatherings and performances will look like. But for now, MacQueen said he doesn’t think it makes sense to be anything other than cautiously optimistic for the future.

“We just don’t know what it brings. To throw in the towel would be fatalistic, and we’re certainly not that way,” he said.

But he hopes that 2021 may bring a vaccine or treatment for COVID-19.

“When that happens, we will be ready to respond. But obviously we don’t want to do that until it’s safe to do it. I’m not going to put people’s lives at risk to come and see a show,” he said. “It’s wrong.”

In the meantime, the theater has felt support from its sponsors and the community. A number of ticket holders opted not to take their refund for cancelled shows but instead told the theater to keep the money as a donation, MacQueen said. The theater also received funds through the Paycheck Protection Program and the Vermont Arts Council.

“We’re all going to get through this in some form or fashion. When we’re all ready to come back, the Flynn will be there,” he said. “In the meantime, we’re going to do everything we can to still be there for people outside the theater finding ways to connect in powerful and meaningful and fun ways.”

Bread and Puppet Theater in Glover is known for its performances centering on social and political issues.

But like many performing arts centers, the theater company had to close at the onset of COVID-19. With the loosening of state guidelines around outdoor gatherings the troupe has begun a performance in its Pine Forest theater called “Resurrection and Insurrection.”

The goal of the piece is to provide a memorial to those who have died in recent months both from the coronavirus and police violence, said Joshua Krugman, one of the theater’s puppeteers.

It hasn’t been easy to make it through these challenging times. Historically, the company has funded itself through sliding scale donations at its performances and by hosting workshops.

The theater has avoided applying for grants because it doesn’t want to be indebted to the institutions it critiques, Krugman said.

The group applied for and received funding from the Paycheck Protection Program and the Vermont Arts Council. That money covered about one month of the theater’s operating costs, Krugman said.

Bread and Puppet is hoping to launch an option for fans to donate in a form akin to VPR’s “Sustaining Members,” Krugman said.

“We want to implement as soon as possible an option for people to be able to support the ongoing operations of Bread and Puppet in a similar way because we don’t think that income from performance is going to allow us to stay afloat during this unknown duration of this crisis,” he said.

As for the future, Krugman said he’s no epidemiologist, but he knows there’s thirst for performance arts, collective gathering and collective action.

“It’s clear that the role that performing arts play in people’s lives is very important in Vermont as it is everywhere,” Krugman said.

From sporting events to weddings, Broadway shows to concerts, it has been a challenging time for performing arts and gatherings.

And there will be more than a few hurdles to jump before these experiences can return.

Higher Ground will have to wait until it’s safe to operate at full capacity – 50% capacity is not sustainable, Crothers said.

But performers will also have to feel safe touring, and venues will need time to book and promote performances –which can take three to six months of lead time at the club level, Crothers said.

Despite those challenges Crothers believes performing arts will return. And he believes that when it’s safe to do so, they will be ready to gather in venues as they did before the pandemic.

“People are hard-wired to want to get together,” he said.

With no immediate solution for the pandemic, Higher Ground is making the best decisions it can for the next days and weeks.

“At the end of the day, this is going to resolve itself, with or without us. It doesn’t matter the amount of plans we make; they’re probably inevitably going to be wrong. Now, we’re better off focusing energy and time on things that we can control today,” Crothers said.

That includes running drive-in concerts at the Champlain Valley Expo and promoting local artists on Higher Ground’s social media pages. This keeps Vermonters connected to public arts, but it isn’t a business model, Crothers said – all proceeds from the drive-in concerts are being donated to the Vermont Arts Council.

There have been conversations at the state and federal-level seeking aid for Vermont’s performing Arts Sector. It’s unlikely that performing arts organizations can survive to the other side of the pandemic without aid, Crothers said.

“This too shall pass,” Crothers said. “I do believe we’re going to get on the other side of this. The world has seen other pandemics and they got through it. We’ll get through this one. We will get through it and performing arts will survive.”