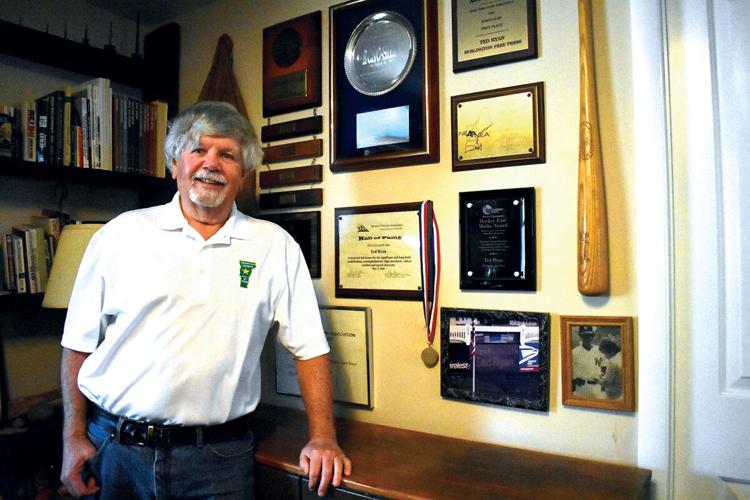 Ted Ryan, a longtime Vermont sportswriter, will be inducted to the Vermont Sports Hall of Fame on April 30. 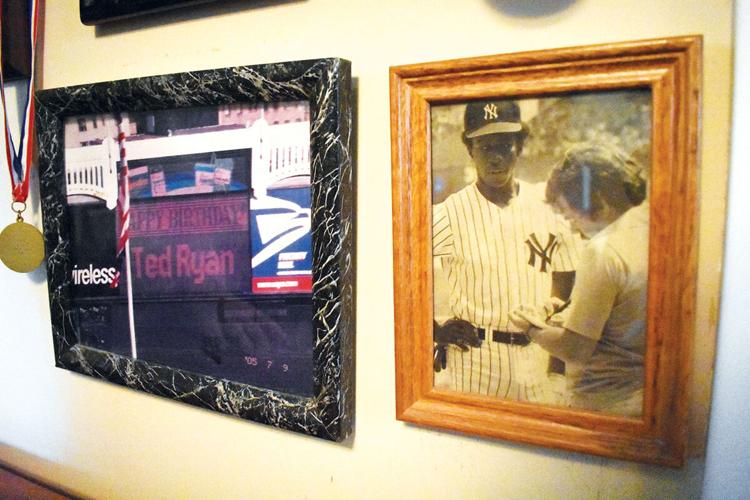 Ted Ryan, a longtime Vermont sportswriter, will be inducted to the Vermont Sports Hall of Fame on April 30.

Ted Ryan’s first byline was relatively short but still a bit of a challenge.

He was a senior in high school in 1964, writing a piece as the newest Rutland High School sports correspondent for the Rutland Herald.

“It took me forever to write that first story, which was probably about six inches long,” he said. “But once I got through that and got into it, it did come fairly easily. I felt comfortable.”

More than 50 years later, the amount of copy Ted Ryan has written for newspapers in Vermont would be difficult to tally.

He’s written thousands of stories as the beat writer for the University of Vermont hockey teams alone, not to mention the heaps of copy he’s written about fishing, auto racing, baseball, softball, soccer, “basketball, obviously,” and, of course, hockey — along with all of the winter sports played and practiced in Vermont.

“I guess I haven’t done a lot of volleyball because it’s so recent as a varsity sport in Vermont,” he said, working hard to think of a sport he hasn’t covered during his tenure in the Green Mountains.

Now, Ryan’s tremendous career, which he retired from in 2019, will be honored as the 2022 David Hakins Inductee into the Vermont Sports Hall of Fame “for exceptional promotion and development of sports and athletics in the Green Mountain State,” the group’s website reads.

He’s grateful, naturally, but says he feels “funny” about the whole thing.

“You’re going to look at that list, and all of the ones before, that are all so talented or athletic, and their accomplishments as coaches,” he said. “And you know, I didn’t do that, all I did was write about their accomplishments. I’m honored, but I’m really humbled to even be put in that class.”

He knew at a young age he was never going to be a great athlete. Instead, Ryan built a decades-long career documenting the development of dozens of sports and their athletes in the state with ease, all underpinned by a love for Vermont.

“I had a great time — 55 years. I used to say, once upon a time, I was going to have to grow up and get a real job. Well, I never did,” he said. “I never had a job because when you love what you do it isn’t work. I loved it for the whole time I was doing it.”

Ryan began his career with the Rutland Herald, where he would work summers, filling in for the full-time writers on vacation.

He kept up the work as he studied mathematics at the University of Vermont. Although by the time he was first enrolled, “having had a taste of sports journalism, I was pretty set that I was going to be pursuing that instead,” he said.

His lifelong love of sports is evident — his home is adorned with photos of him with legendary athletes: Arnold Palmer, Willie Randolph, Mickey Mantle.

Eventually, he became the Herald’s sports editor and remained there until 1975, when the Burlington Free Press recruited him as a beat writer covering the University of Vermont’s hockey team.

His coverage took him throughout New England, driving through “rather hellacious snowstorms getting to Ithaca, N.Y., for Cornell or to Princeton, N.J., or to New Hampshire or Maine or wherever” for UVM hockey games, covering hundreds of athletes as they moved through their careers.

“Editing copy every night, I knew all the names in the northern part of Vermont, that’s for sure,” he said.

He covered John LeClair, the St. Albans native and U.S. Hockey Hall of Fame inductee, while he was in high school and throughout his UVM career, to the night when he became the first Vermonter to suit up for an NHL game, and when he scored his overtime goal in the 1993 Stanley Cup championship series.

He covered Tim Thomas, a fellow inductee this year and another U.S. Hockey Hall of Fame inductee, when he helped win the Stanley Cup in Boston. And, he covered Amanda Pelkey, the Olympic ice hockey forward who, during her time at UVM, accumulated 105 points for the women’s hockey team.

Along the way, he’s seen sports develop as players refined their craft and abilities.

“The quality in almost every sport has picked up over the years,” he said. “It’s impressed upon me again and again throughout the years that there are valuable lessons from sports and not just from winning. A lot of times, it comes from the losing, a lot of times it comes from just giving it everything you have and walking away saying, ‘That may not have been great, but it was everything I could do. It was the best I could do.”

But while the number of games to cover has increased, the pages to put them in, and the reporters to write about them, have been on a steady decline.

He saw the writing on the wall and took a buyout from the Free Press in 2008, but he couldn’t stay away and continues to freelance.

He kept going until 2019, when Gannett, the company that owns the Burlington Free Press began cutting even more coverage, so he decided that would be it. Now he plans on doing a bit of traveling, while waiting for the warmer weather to come so he can gear up for his mens’ softball league.

“My goal throughout my career was really pretty simple. … It was three parts. Be accurate, be honest, be fair,” he said.

The ninth class for the Vermont Sports Hall of Fame is set for a live induction celebration and dinner Saturday, April 30, Delta Marriott Hote…