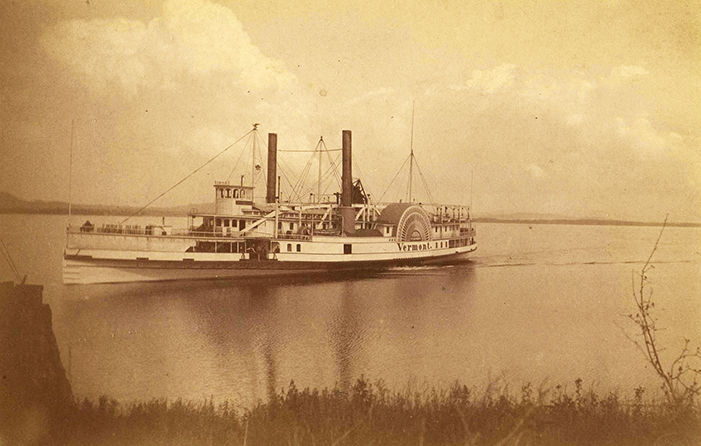 Shelburne Shipyard had a rich history in building steamboats that sailed on Lake Champlain, including the S.B. Phoenix and the Vermont II (pictured). The Vermont II which was one of the most elegant vessels of its time. Photo courtesy Lake Champlain Maritime Museum. 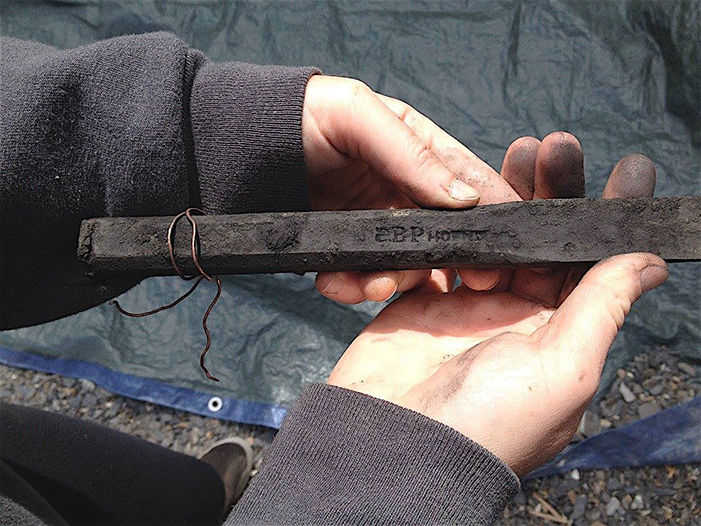 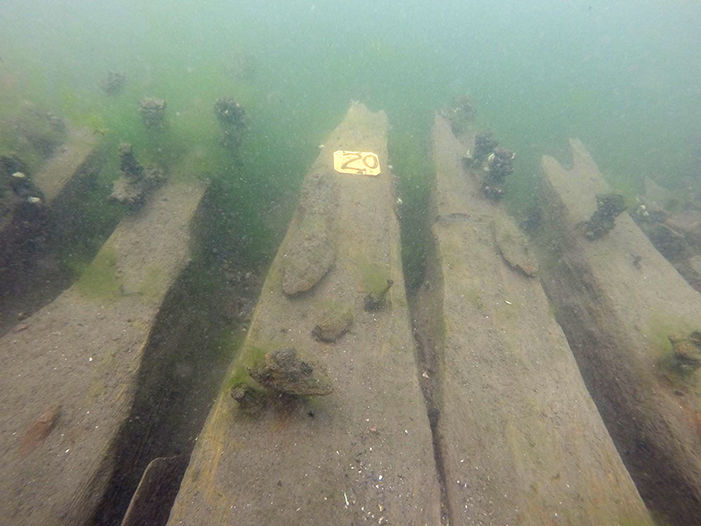 An underwater view of the remains of the S.B. Phoenix taken by divers from the Shelburne Steamboat Project.

Shelburne Shipyard had a rich history in building steamboats that sailed on Lake Champlain, including the S.B. Phoenix and the Vermont II (pictured). The Vermont II which was one of the most elegant vessels of its time. Photo courtesy Lake Champlain Maritime Museum.

An underwater view of the remains of the S.B. Phoenix taken by divers from the Shelburne Steamboat Project.

On a recent June morning on a beach near Shelburne Shipyard, boats bobbed on a sparkling Lake Champlain. A group of people with a shared interest in this shipyard’s vessels assembled at the water’s edge. The tools of their trade were laid here and there: cameras, notepaper, pens, and most importantly, scuba tanks. This team, under the leadership of Texas A&M University nautical archaeologists Carolyn Kennedy and professor Kevin Crisman, was not there to see the shiny vessels on the surface. Tucked in this protected cove, and hardly hidden beneath the water’s surface on this clear day, lay the remains of earlier days in this shipyard, and for three weeks, this team has been carefully uncovering them.

In the sediment on the lake bottom, the almost-skeletal remains of 19th-century steamboats contain the story of a pivotal moment in American history, explained doctoral student Kennedy. The nautical archaeologists are scuba diving at this site to document these vessels.

“In archaeology we don’t have the luxury of having a ton of information at our disposal,” Kennedy noted. “However, here, we do.” The quiet, protected Shelburne Bay has provided an ideal situation for preserving the wrecks in great detail, and the research, including underwater photography, notetaking and collecting artifacts, proceeds with extreme care and attention to detail, since archaeology is “destructive in nature,” said Kennedy, adding that the areas investigated were then backfilled.

Steamboats introduced a level of autonomy and predictability unseen with earlier modes of transportation, Kennedy said. Furthermore, this innovation was welcomed—a novelty in itself.

“Not only is it a new technology that’s going to change how people travel because people now travel on a schedule on time, but it’s also that people accepted that change,” Kennedy said. Starting in 2014, the team has collected data on how the boats were constructed, an evolving process which reflects a society undergoing the changes of the Industrial Revolution, she said.

Working at the site with permission from the Vermont Division for Historic Preservation, the archaeological team identified and studied the remains of four 19th-century steamboats, whose names and dates of service are now known. A historical map, photographs, documents, and the boats’ sizes aided researchers in identifying the boats, though one, the Phoenix II, proved a challenge to identify. It was not on the map the team studied, and its size did not quite match any known wrecks in the area. The mystery was finally solved by a historical document describing the Phoenix II, whose dimensions reasonably matched the mystery steamboat lying on the harbor floor.

When it came to the shipwrecks’ identities, “you can never be 100 percent sure of anything in archaeology,” Kennedy said. That is, until the day archaeologist Daniel Bishop popped up from scuba diving on the wreck, clutching a handful of artifacts from the center of its wooden ribcage. Among the objects he handed to teammates on the dock was a chisel. The letters “B PH” were visible, and a bit of cleaning revealed the full name of the chisel’s former home: “SB PHOENIX.”

Such assurance is extremely rare in archaeology. Finding the chisel was “a big shining moment for us,” Kennedy said. “We never thought that we’d be able to confirm it. Well, guess what. We confirmed it.”

The project produced a few artifacts in addition to the chisel, including wire, a spoon, a drill bit and broken alcohol bottle glass. However, the site is certainly not the treasure trove the word “shipwreck” might evoke. Rather, the hulls represent the nautical equivalent of a trash heap.

They were intentionally sunk here, Kennedy said, once they had outlasted their useful existence, and anything monetarily valuable would have been removed before the boats were scuttled.

“Maybe that chisel wasn’t valuable enough to remove at any point, but at the same time it had a name on it, and that was just too cool,” Kennedy says. The real treasure, though, is the information contained in the construction of the boats themselves.

The steamboats’ construction shows a clear progression through time, said Lake Champlain Maritime Museum Archaeological Director Chris Sabick, who also participated in the fieldwork. The oldest, the Phoenix II, was in service from 1820 to 1837 and provides a glimpse at a moment almost two centuries ago, when shipbuilders were experimenting with steamboat construction. The boat represents a link between the earliest known archaeological examples of steamboats, and later, more standardized designs, Kennedy said. The A. Williams, youngest of the four, traveled between 1870 and 1893.

“These shipwrecks and the comparison of their various features and construction techniques informs us about the way that shipbuilding techniques were changing over time as adaptations to steam technology and the local environment were learned from earlier steamboats and then incorporated into newer vessels,” says Sabick.

Each of the boats, once passenger vessels traversing Lake Champlain, contains a story. The Burlington, active from 1837 to 1854, once carried Charles Dickens. The Whitehall ran then, too, from 1838 to 1853. The Phoenix II transported cholera victim John Larned into the United States, where he died, still aboard the steamboat, at Whitehall, NY in 1832.

Fieldwork on the site is complete, but the project is not over. Kennedy plans to use this research in her PhD dissertation.

The research is also useful for the Lake Champlain Maritime Museum, Sabick said. Research partnerships such as this “allow us to facilitate the preservation of these non-renewable resources through education and public outreach as well as adding to our knowledge about particular vessels and the evolution of shipbuilding technology in general.”

He expects this project’s results to form the foundation of a future exhibit at the museum. Also planned is conservation of the wood and metal artifacts retrieved from the lake bottom, Kennedy said. She also wants to reassemble those alcohol bottles found tucked in the sleeping area of the Phoenix II. They are, she said, a “puzzle with many missing pieces.”

It will not be an easy task, but neither was assembling a story whose pieces have been lying on the bottom of Lake Champlain for over 100 years. “All of archaeology is luck,” Kennedy said.