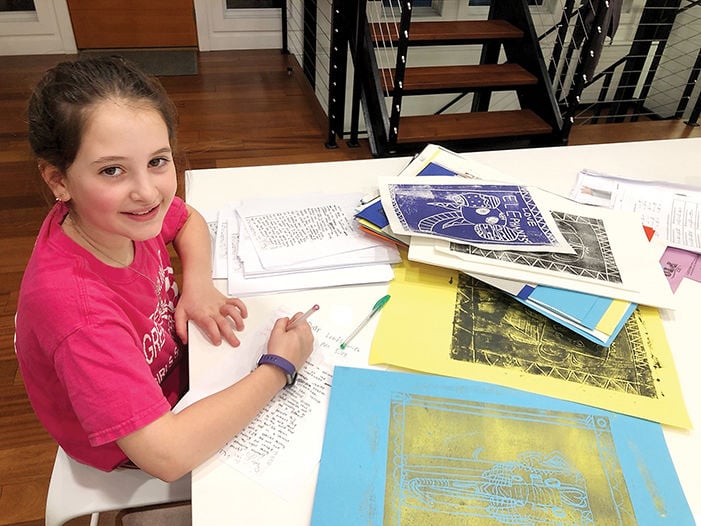 Sara DiGuglielmo signs 180 letters to attach to the animal prints made by Shelburne community School students in preparation to hand deliver to members of the Vermont Legislature. 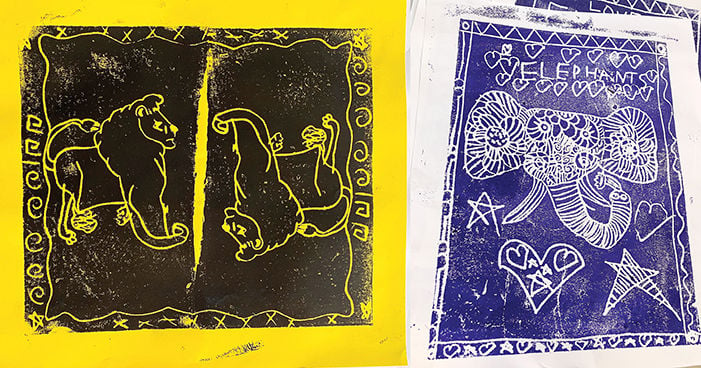 Second graders at Shelburne Community School made prints featuring the animals highlighted in the bill before the state Legislature to ban the sale and trade items involving trafficked wildlife. They made a print for every member of the Vermont House and Senate in support of the bill.

Sara DiGuglielmo signs 180 letters to attach to the animal prints made by Shelburne community School students in preparation to hand deliver to members of the Vermont Legislature.

Second graders at Shelburne Community School made prints featuring the animals highlighted in the bill before the state Legislature to ban the sale and trade items involving trafficked wildlife. They made a print for every member of the Vermont House and Senate in support of the bill.

It started more than a year ago with a third grader’s love for elephants.

Soon, the entire Vermont state Legislature may know about now-Shelburne fourth grader Sara DiGuglielmo’s passion for pachyderms as part of a multi-faceted lobbying campaign headed to the Vermont State House.

Sara and her schoolmates are hoping to capture the attention of lawmakers in Montpelier with their support for a bill banning the trade of endangered wildlife products and parts in Vermont: H.99 in the House and S.29 in the Senate.

Both student and adult animal-rights activists are eager to make their case for Vermont to be the 10th state to strengthen its laws against the worldwide black market that thrives on poaching threatened species.

The student involvement in the issue grew out of Sara’s “Genius Hour” project at Shelburne Community School last year. Students spend an hour a week to pursue a topic that interests them.

Third-grade teacher Joey Adams recalled Sara’s laser-focus on elephants. And, the more she learned, the more her passion for the animals grew.

“They remind me of humans,” Sara said in a recent interview.

Learning how elephants are hunted for their tusks sparked her desire to take action.

“They need someone,” she said.

At the start of fourth grade this school year, Sara returned to Adams’ classroom hoping a new group of third graders would care about the plight of elephants. Soon, the class was collecting their allowances and small contributions.

They contacted the David Sheldrick Wildlife Trust in Kenya and with just shy of $100, the students adopted a young elephant named McKenna, who was orphaned and found starving at just seven weeks of age. McKenna now lives at the Sheldrick reserve and funds raised by the Shelburne students support her care.

“Sara’s become the spokesperson in the school for this,” Adams said.  “She’s inspiring other kids.”

Beyond elephants and ivory

Wanting to learn more, Sara connected with Ashley Prout McAvey, a Shelburne parent and animal rights activist who shares Sara’s love for elephants. McAvey’s volunteer organization Ivory Free Vermont in 2016 pushed for legislation to ban the sale in Vermont of items made from ivory. A bill made it through the House but failed to get a vote in the Senate.

McAvey said her research has found approximately 96 elephants a day are killed for their tusks with the U.S. the second-largest market after China. Federal laws are complex and incomplete, she explained.

“Loopholes in the federal laws allow ivory to seep into the state markets and once there, it can be bought and sold freely and sold to other states that don’t have clear laws on the books,” she said.

McAvey’s organization has evolved into Vermont For Wildlife with a broader focus now beyond elephants and ivory to a larger group of endangered and trafficked animals.

The bill introduced in Montpelier in January calls for a ban on trade in animal parts from: cheetah, giraffe, hippopotamus, jaguar, leopard, lion, pangolin, ray, rhinoceros, sea turtle, shark, tiger, whale. It also specifies the extinct mammoth and mastodon because modern ivory is sometimes labeled as coming from the prehistoric creatures, McAvey said.

The House version of the bill has 34 sponsors, 20 of whom are from Chittenden County including Democratic Reps. Kate Webb and Jessica Brumsted from Shelburne, Mike Yantachka of Charlotte, and John Killacky and Maida Townsend of South Burlington.

Identical drafts are before the House Committee on Natural Resources, Fish and Wildlife and the Senate Committee on Economic Development, Housing and General Affairs.

Sara’s efforts in school caught the attention of art teacher Pete Boardman, an ardent animal-lover himself.

“I asked how could I help?” Boardman said.

His second-grade students were interested in getting involved and art class seemed like a good place to start. The youngsters spent weeks this winter designing prints depicting animals named in the bill. They created dozens of images of tigers, elephants, whales, lions and more.

At a school assembly several weeks ago, Sara updated the whole school about the campaign. “Can you imagine a world without elephants?” she asked the student body.

She encouraged students to write letters to legislators and to tell friends in other parts of Vermont to join in.

Meanwhile, Boardman’s students kept printing until they had nearly 200 colorful original works of art – enough to give one to each member of the Vermont Legislature. On the back of each piece is a letter supporting the bill, signed personally by Sara.

The letter reads in part: “The kids in Vermont want to be sure that we can see animals in the wild and that our children can too? … No item that can be bought and sold in a Vermont store is worth an entire species becoming extinct. We will not stop fighting and raising our voices until Vermont does the right thing to protect these amazing animals that we love so much!”

Reps. Webb and Brumsted have seen the art and wrote to the students to cheer them on: “Your art is exquisite and how wonderful that you know already the power of art in creating powerful and meaningful messages!”

The children’s enthusiasm has been energizing to McAvey who holds cautious optimism for the bill’s chances this year. She’s hopeful given the bill’s broader focus and the fact that it addresses details that held it up on past tries. For example, it contains exceptions for antiques and musical instruments.

John K. Martin, Jr., owner of Martin’s Coins & Jewelry in South Burlington, is a supporter. “Particularly when you understand the severity of the poaching crisis right now in Africa … you realize the obligation we have to shut down the trade of ivory and rhino horn at the state level,” he said in a press release. “And, given the irrefutable links between the blood ivory trade and terrorist groups, there is no question that we here in Vermont need this law on the books in 2019.”

The first hurdle is getting lawmakers to discuss the bill, especially with the legislative session past its halfway mark.

As of press time, some movement was in the works. Senate Economic Development Committee Chair Michael Sirotkin, D-Chittenden, on Wednesday morning told the Shelburne News that he was working to schedule a hearing for S.29, possibly as early as Friday. He said he hoped the schedule could work for the youngsters to visit and testify.

“My committee is greatly looking forward to hearing about the Shelburne school kids’ project,” he said.

This year was all about the issues: With some large projects resolved and locals making a difference for the issues they cared about.