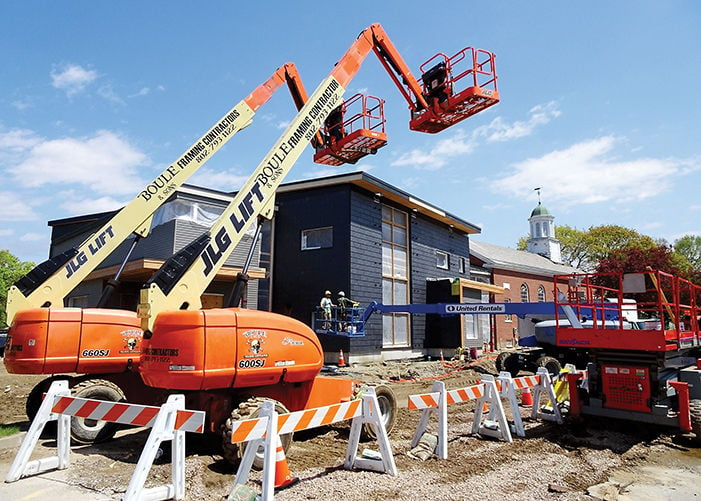 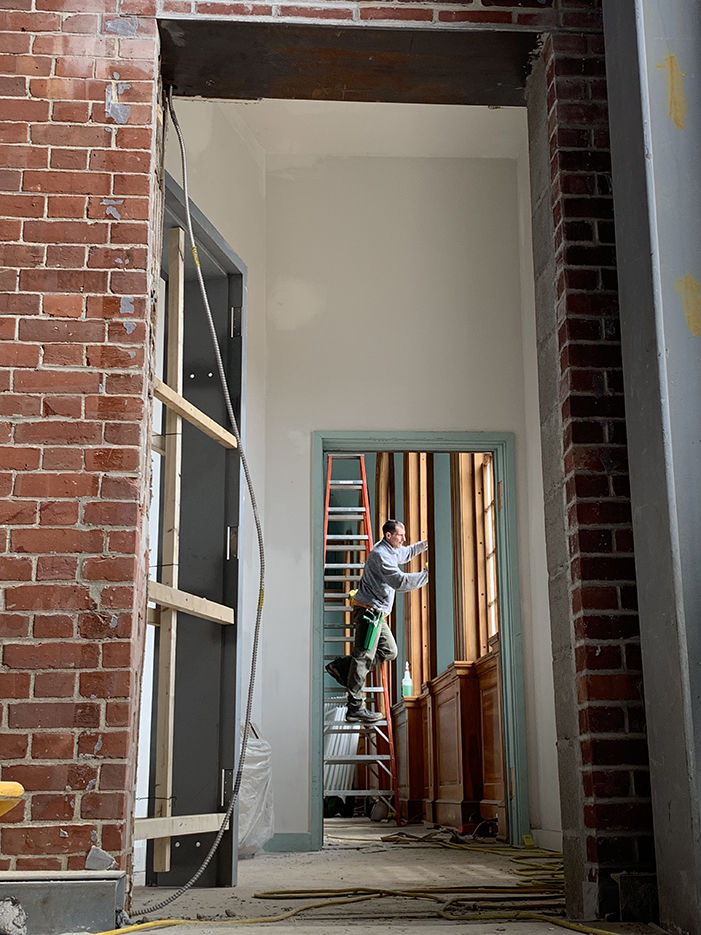 A worker puts finishing touches on windows in the historic Town Hall which has undergone renovations. Town Hall will be accessible through the common entry in the connector with the library space. 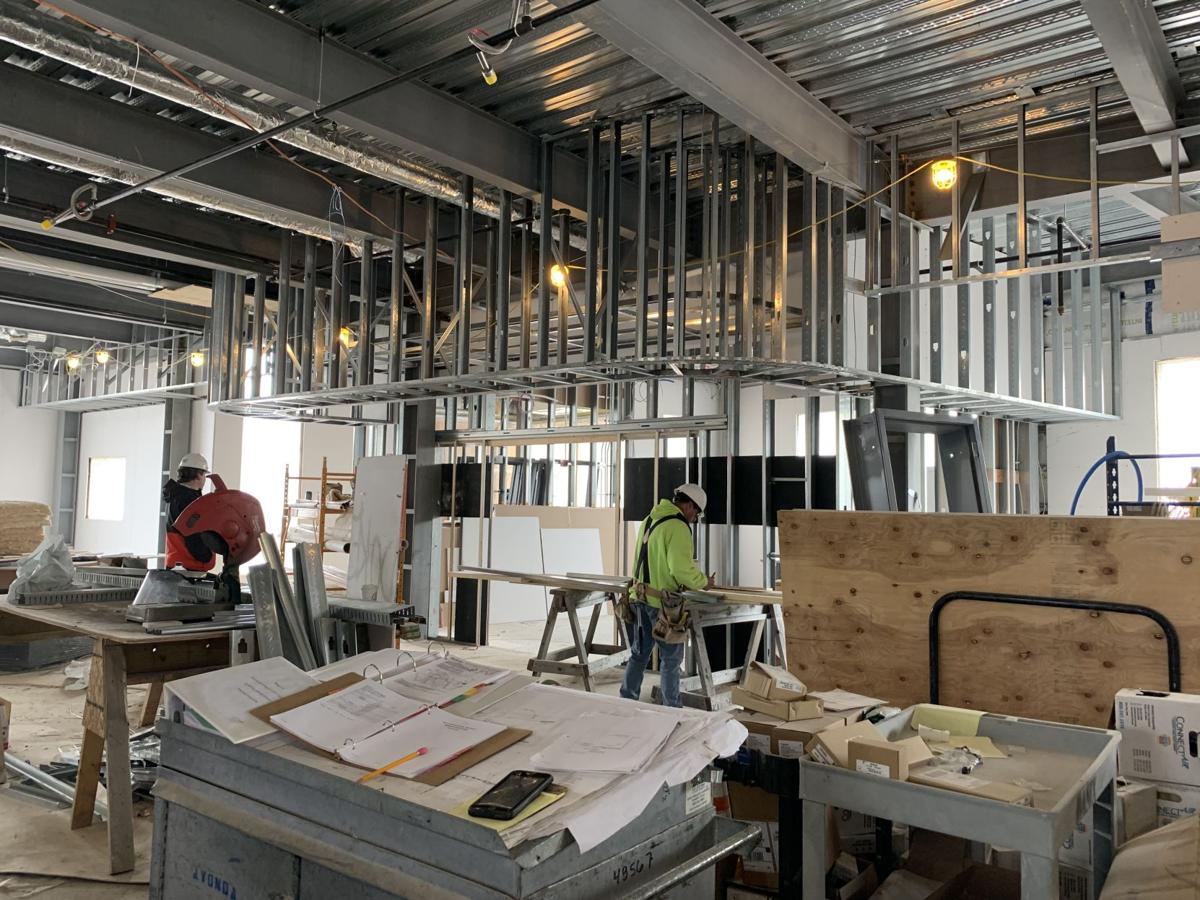 The circulation desk takes shape inside the first floor of the new Pierson Library last week. Staff work space will be situated behind the counter area. The desk is near the main entry and anchors the ground-floor children’s section.

A worker puts finishing touches on windows in the historic Town Hall which has undergone renovations. Town Hall will be accessible through the common entry in the connector with the library space.

The circulation desk takes shape inside the first floor of the new Pierson Library last week. Staff work space will be situated behind the counter area. The desk is near the main entry and anchors the ground-floor children’s section.

With each passing week, the new Pierson Library inches closer to completion and project planners are beginning to look ahead to a grand opening by late summer.

Throughout this past winter, builders created the steel-framed two-story 12,900-square-foot addition behind Shelburne’s historic Town Hall that will be the Pierson Library’s 21st-century home. Along the way, the 19th-century Town Hall has been renovated and, in between, a new space was built that designers have dubbed the “community living room.”

Last week, the Shelburne News met up with library director Kevin Unrath and trustee Chair Ruth Hagerman for a peek inside. Neagley & Chase Construction Co. from South Burlington is the lead contractor on the project designed by Vermont Integrated Architecture in Middlebury.

Key to the project has been more than $1 million in fundraising which has helped cushion the impact of unexpected costs along the way. Voters approved a bond of up to $6.5 million for the project, but town officials have said only $5.9 million of that will be needed.

Unrath said fundraising recently exceeded the $1 million mark – an anonymous donor supplied $500,000 on the condition it was matched.

“Donations are still coming in,” he said.

Donations have helped offset about $400,000 in unanticipated costs such as testing and cleanup of contaminated soil discovered once excavation began, replacing an underground sewer line found to be in bad shape, and some extra renovation steps at Town Hall that became apparent once work began.

Since the project’s groundbreaking last September, construction crews have worked in the tight space situated alongside the municipal offices, the fire station, train tracks and busy U.S. Route 7. The perimeter of the building is still surrounded by dirt – last week it was mud – given the excavation needed for the project.

Inside, however, the smell of fresh paint filled the air. Renovations inside the 5,700-square-foot Town Hall space are nearly complete. Last week workers on that side were putting finishing touches on masonry and interior entryways.

Unrath and Hagerman entered through the south doorway where visitors can turn right into Town Hall or left into Pierson Library. An elevator towers alongside space for a staircase, both leading to the upstairs level.

The corridor ahead features glass windows into the library, wall space intended to showcase hanging art, an alcove where patrons could grab a cup of coffee or water, and something new on the far end. That’s where the space opens up with to a two-story-high ceiling, a fireplace, and windows with a view of the new patio outside. This 400-square-foot “community living room” will be a space to read, work or talk, and at times be filled with seats for gatherings of up to a few dozen people.

Unrath described the space as “elegant” and “sophisticated.”

“It will be lovely to read in,” he said.

Inside the library, the circulation desk is the dominant feature so far, anchoring the west side of the room. Much of the floor will be devoted to children’s and young adult books, materials and work and play space. Stations for computers are being built not far from an alcove where tots can play as well as a separate glass-enclosed room where middle schoolers or teenagers could work together on homework or projects.

Holding out his hands about waist-high, Unrath gestured to show how book shelves will be kid-height and modular for easy rearrangement; built-in birch benches will offer plenty of spots for parents and children to sit and stretch out.

The main entry to the library on the west side of the building will be a spot to showcase new books and materials as well as a permanent book-sale area stocked by volunteers, Hagerman noted.

Upstairs so far is wide open. Ceiling beams were still exposed last week. Unrath said many bookshelves from the former library will be reused with new birch endcaps fashioned to blend in with the décor. Floors will have carpet and new furniture will include a variety of soft chairs arranged to invite people to spend time. Those needing to work will find a long counter with stools and outlets to plug in laptops and other devices.

Unrath noted that there will be space for 11 public computers in the completed library, an increase from five previously. Each floor also has a meeting room that will be available for small groups to use, Unrath said.

Throughout the space, windows let in natural light – something deliberate according to project architect Andrea Murray. Natural light helps reduce the need for electric light and today it’s welcome unlike in older 19th century libraries that were intentionally dark to protect books from damage from sunlight, she said.

New construction also presents an opportunity to be energy efficient. The library roof will have solar panels to generate almost as much power as the building will use, Murray said. Working with Efficiency Vermont, project designers have incorporated many other energy-saving features such as LED lights, triple-paned windows, extensive insulation, and heat-exchanger technology to regulate heating and cooling.

Slate installed on the library’s exterior walls may seem unique – many Vermont buildings have slate roofs – but the material will help insulate the building while also requiring very little maintenance, Murray said.

“We know municipalities are notorious for not addressing building maintenance,” she said. So a choice was made to invest in a natural material that will last a long time. She said the cost fell between a clapboard siding and brick.

The stainless-steel cladding system used to install the 10-by-22-inch slate pieces also allows for a small space along the building exterior.

“It’s important so the building can breathe,” Murray said.

The slate was imported from France, she noted, saying it was “the one main thing on the project that we weren’t able to source locally.”

A sure sign of work winding down this summer will be when exterior site work comes to life. Murray describes how plantings and pathways will direct people through the site, including a path to connect the library with nearby Shelburne Community School.

“We wanted to separate pedestrians from regular vehicle traffic,” she said.

The pathways are designed to keep people away from Shelburne Road traffic and parking lot activity at the municipal offices and fire station.

“It is truly the community center,” she said.

Project officials have not set a grand opening date yet. Unrath and Hagerman say “late summer” is the target which would put the opening just around the one-year mark from last year’s groundbreaking.