You are the owner of this article.
Edit Article Add New Article
You have permission to edit this article.
Edit
Home
News
Sports
Opinion
Community
Calendar
Special Publications
Marketplace
Classifieds
Contact Us
1 of 7 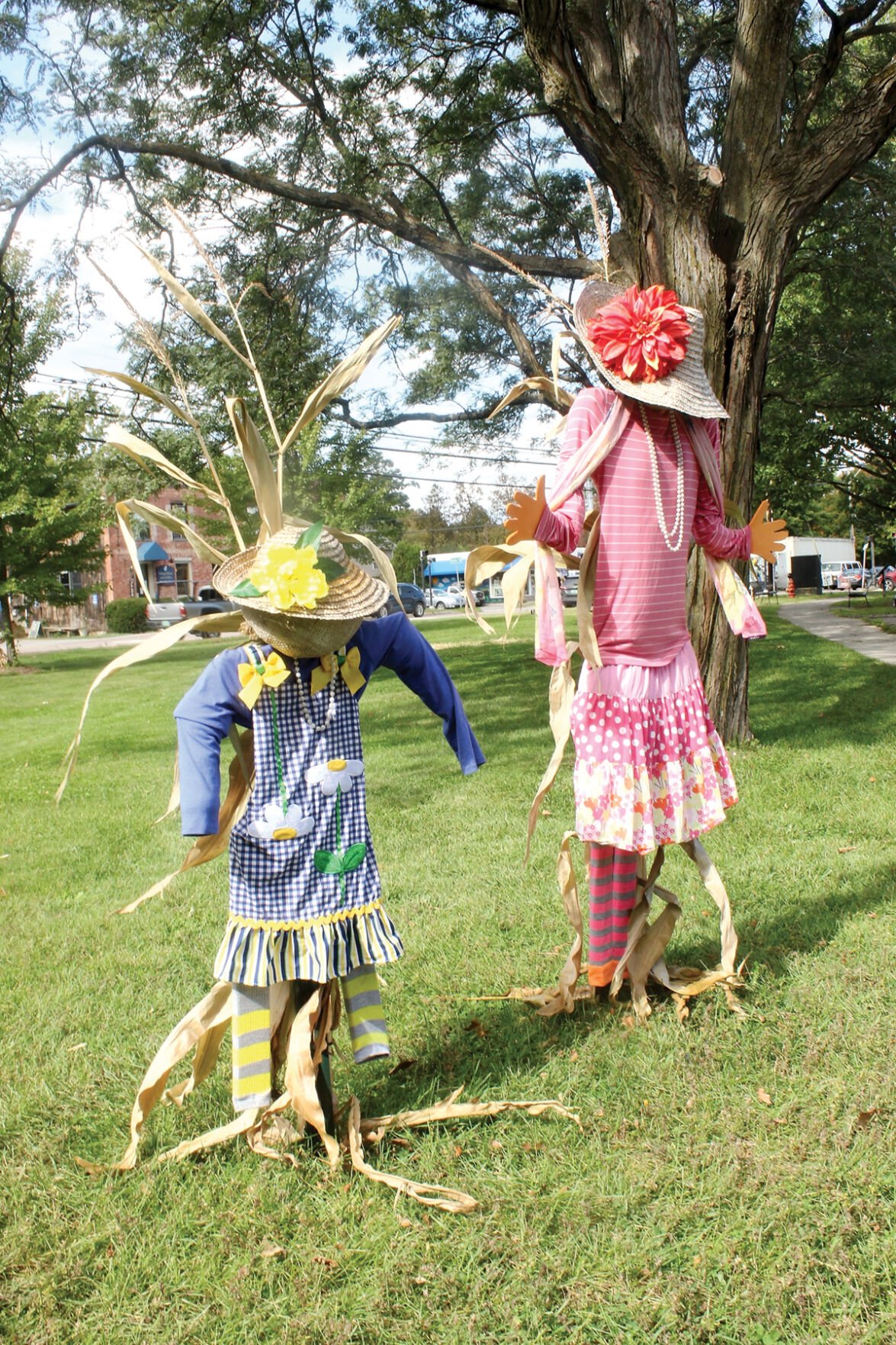 The leaf people are back in Shelburne, thanks to Gracie Pinney, leaf people wrangler for the last dozen or so years. 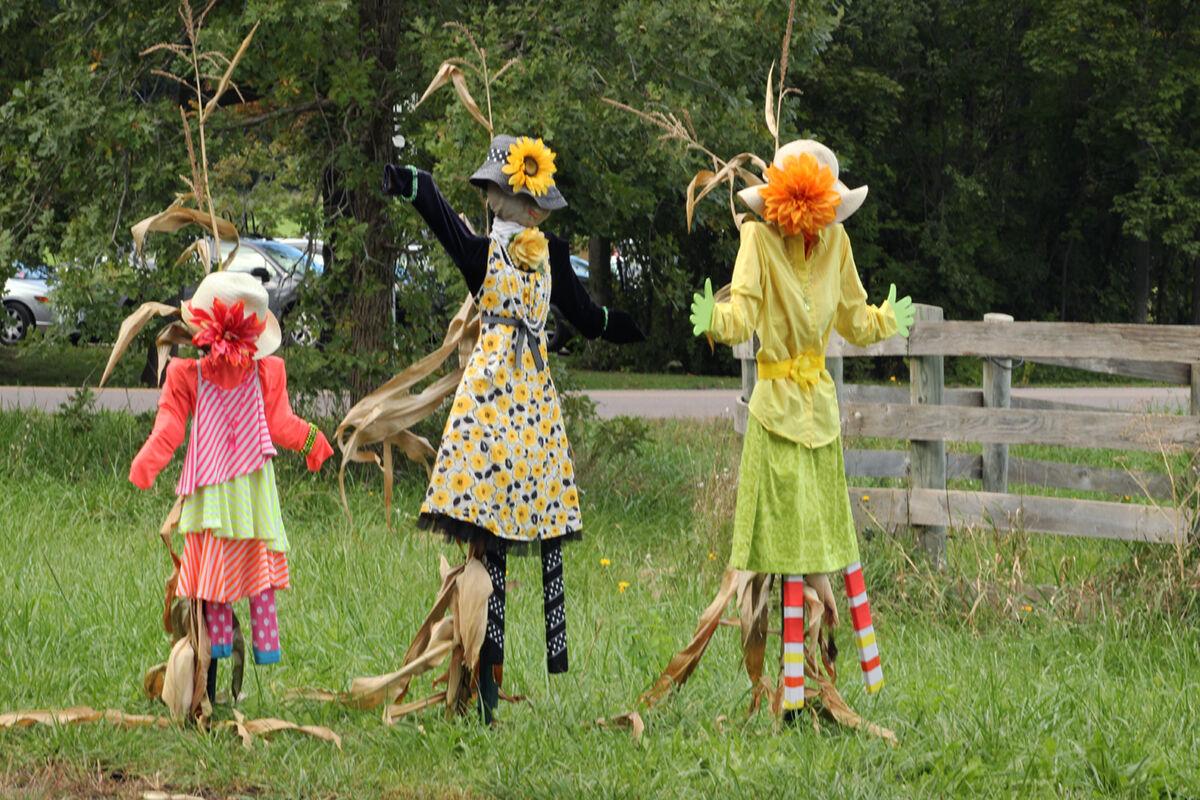 At the gate to Shelburne Farms, two women and a girl are clothed in summery dresses appropriate for a stroll on the grounds. 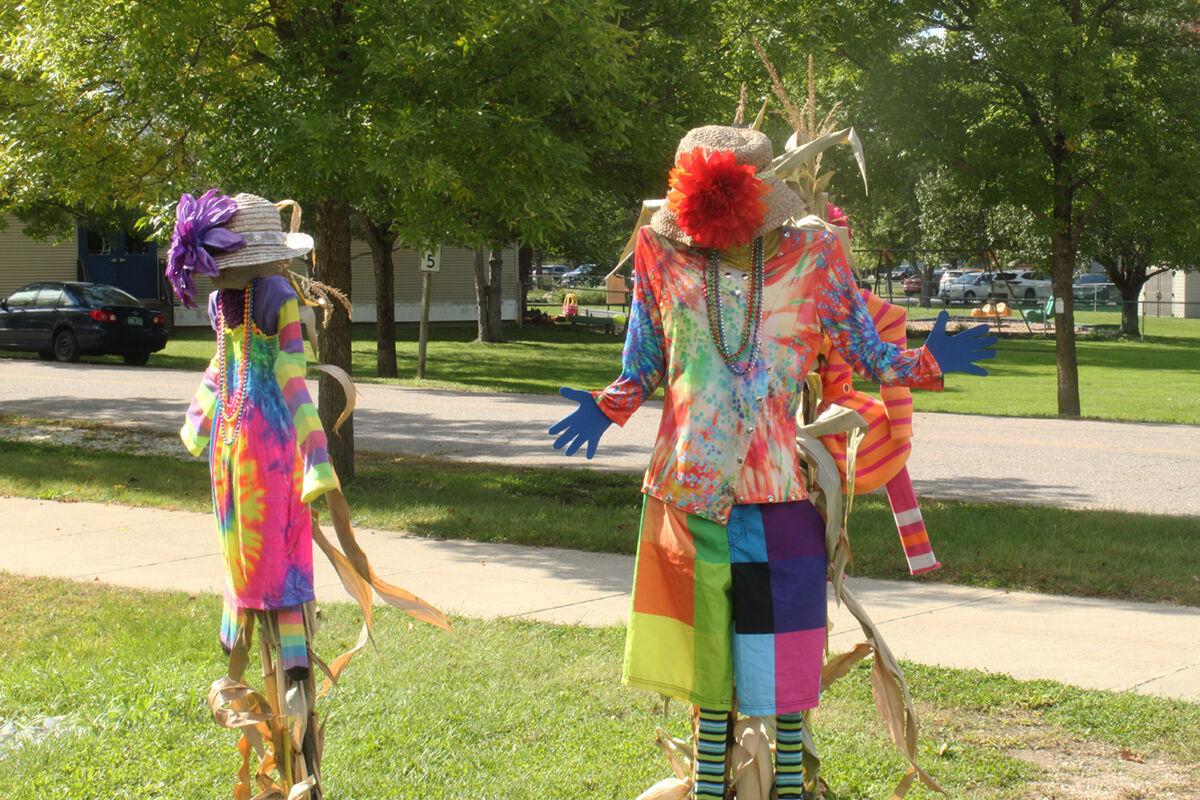 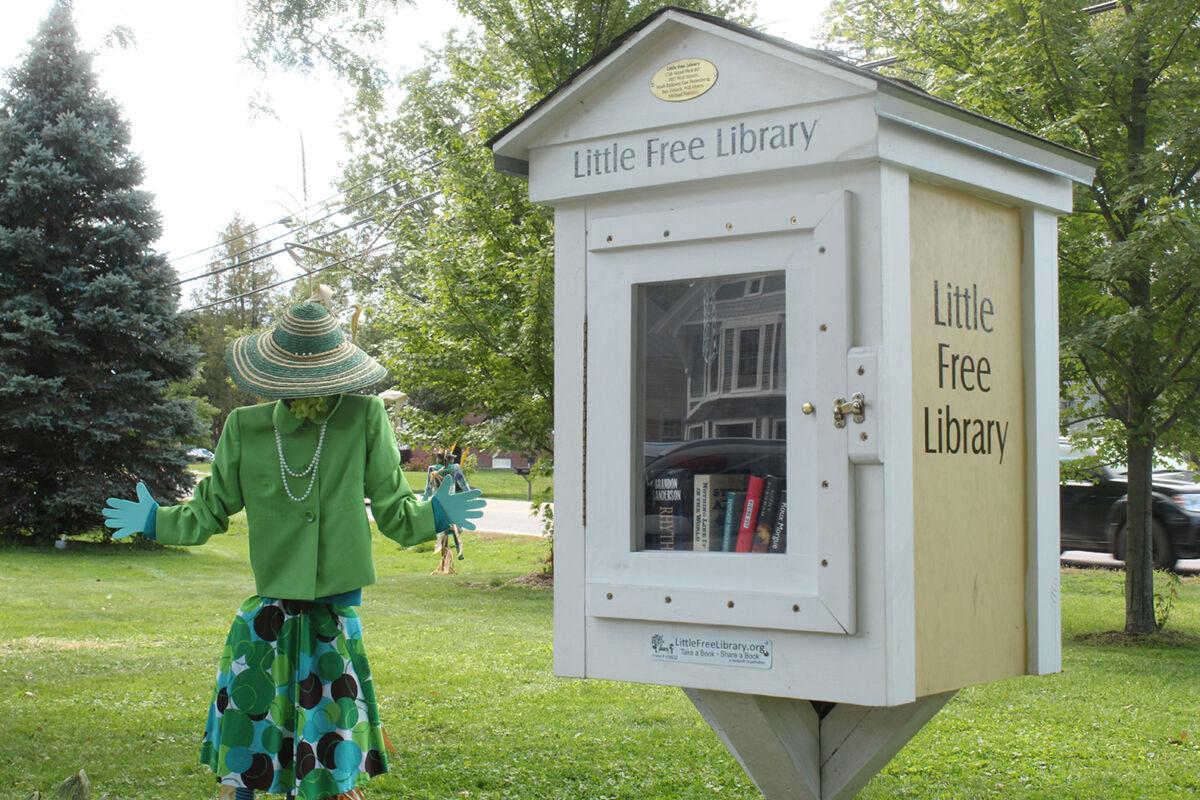 A woman comes to the Shelburne Little Free Library in the town green to leaf through a book. 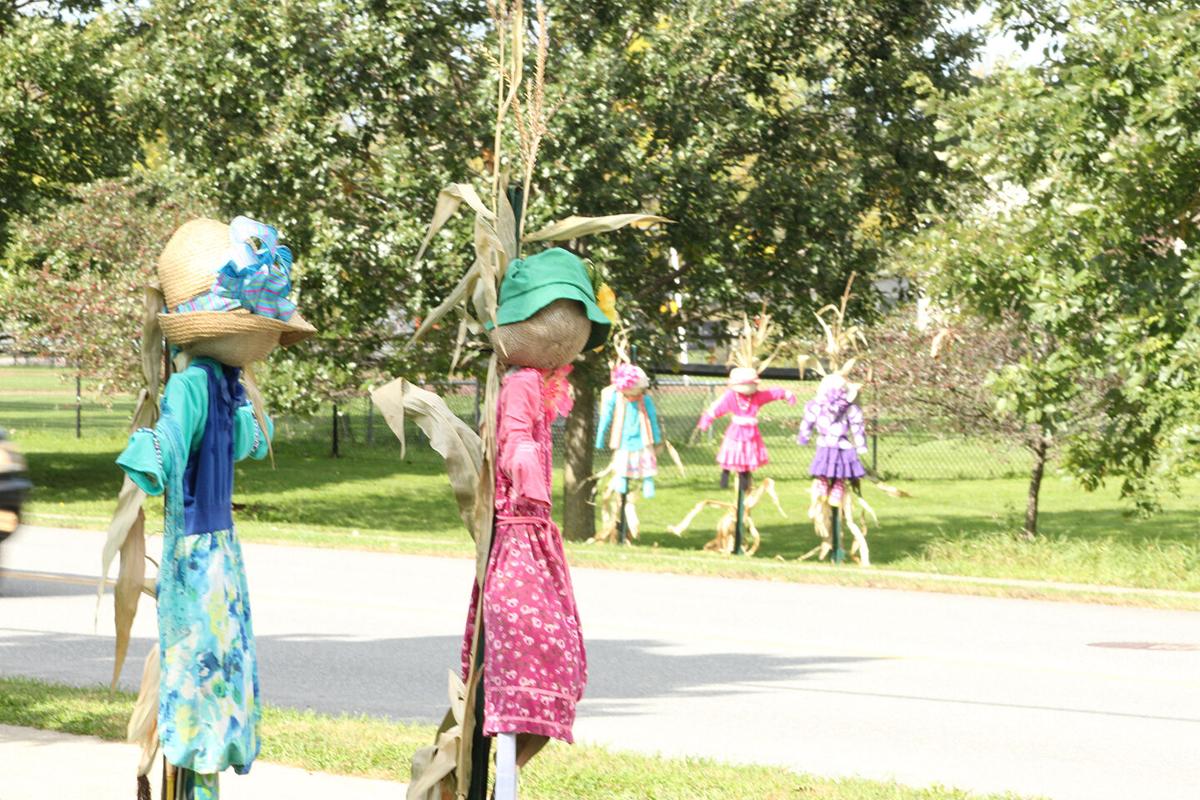 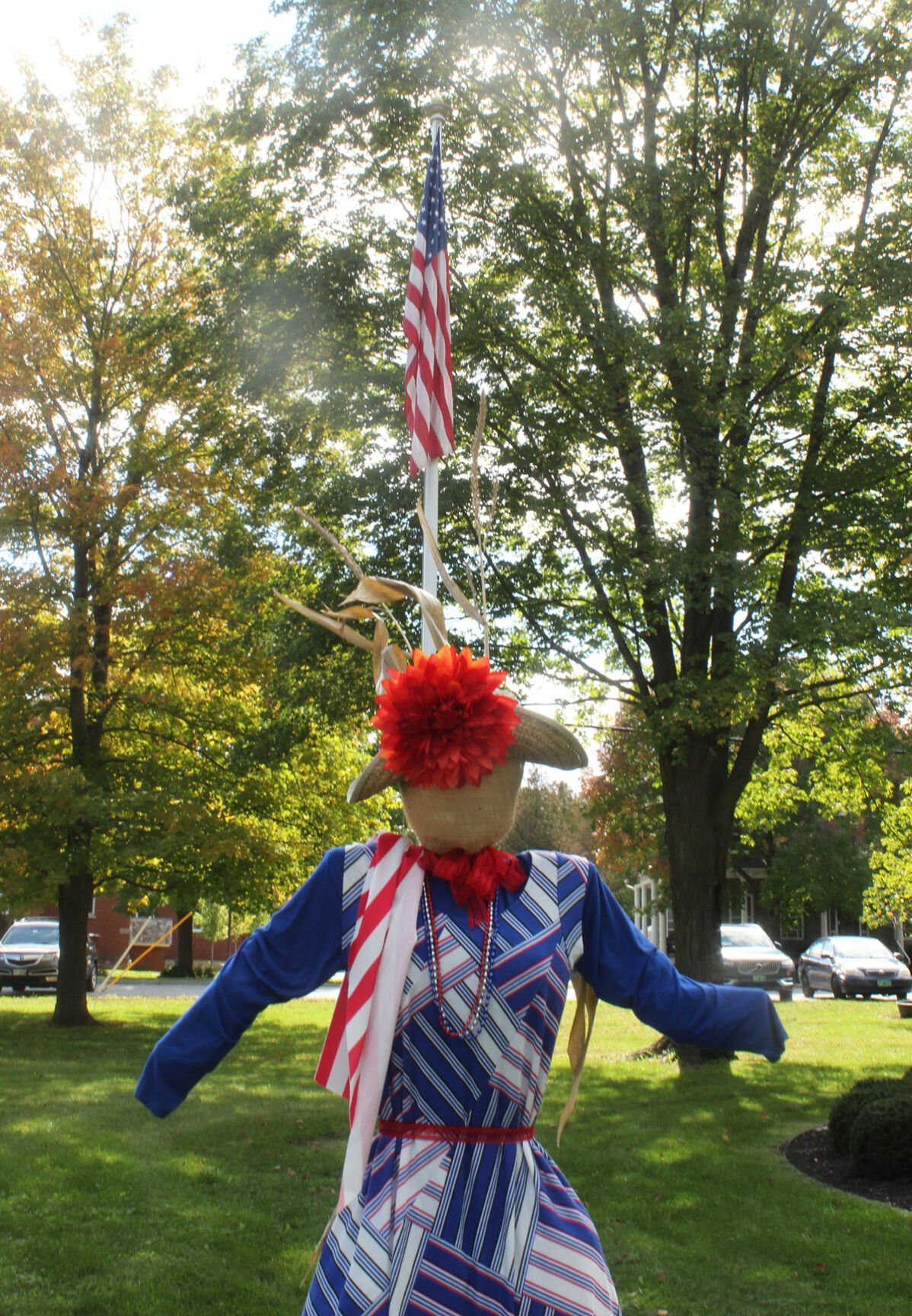 A leaf woman dressed in red, white and blue stripes matches the flag behind her at the Shelburne Veterans Memorial. 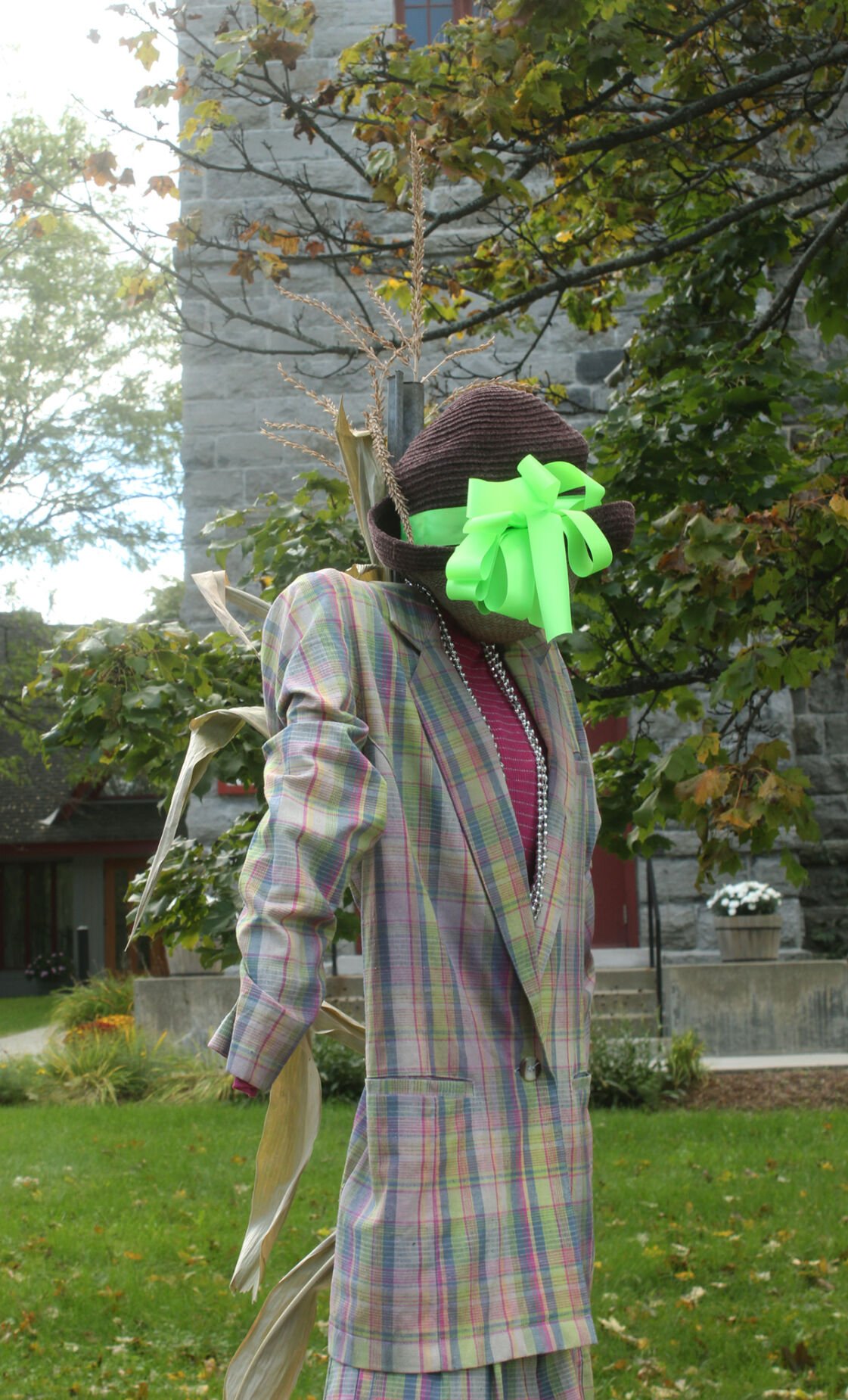 A leaf lady stands in front of the Shelburne United Methodist Church dressed in formal attire in hues that mirror the church's stone blocks.

The leaf people are back in Shelburne, thanks to Gracie Pinney, leaf people wrangler for the last dozen or so years.

At the gate to Shelburne Farms, two women and a girl are clothed in summery dresses appropriate for a stroll on the grounds.

A woman comes to the Shelburne Little Free Library in the town green to leaf through a book.

A leaf woman dressed in red, white and blue stripes matches the flag behind her at the Shelburne Veterans Memorial.

A leaf lady stands in front of the Shelburne United Methodist Church dressed in formal attire in hues that mirror the church's stone blocks.

Materializing around Labor Day and vanishing just before Halloween, if not for a couple of years’ lull, this would be the 25th year that Shelburne has practiced its own brand of autumnal whimsy — the leaf people.

The town’s foliage folk incarnate and dissipate almost without anyone knowing.

“They just appear like magic,” said Gracie Pinney, who has been the leaf people wrangler for 14 or so years.

Pinney is not sure exactly when she became responsible for the leaf people’s wardrobe, dressing them every year in new costumes, mapping out where each will hold vigil during leaf-people season, taking them down and housing them for the 11 months until they apparate again.

In 1997, Cooley was captivated by the leaf people she saw driving through Brandon. When she got back to town, she told the local business association about the wonderful leaf people she had seen there.

“They thought it was terrific,” Cooley said.

She got in touch with the Brandon Chamber of Commerce, found out how it was done and got the town’s blessing.

Shelburne had about 30 leaf people that year.

Cooley grew up in Waterbury and really likes its painted train on the trestle over Route 2/100 near the roundabout on the north end of town, each of the train’s cars painted to look like a different iconic town building.

Cooley is impressed with what Pinney has done with the leaf people during her tenure as leaf people herder.

“She took everything that we started back in the late 1990s to a whole new level of creativity and imagination,” Cooley said. “I hope she can continue doing this for years because she’s wonderful.”

Cooley said one year Pinney had to move the leaf people back away from a bus stop because the buses were stopping to pick them up.

Bernie Carr is executive director of the chamber of commerce in Brandon where the leaf people have been an autumnal tradition for about 30 years.

The inspiration there came from that town’s Wood’s Market Garden, which had put leaf people on tractors, near signs or with hay bales, Carr said.

The town kind of expanded the market’s idea to about 50 leaf people.

Over the years “hundreds and probably thousands of pictures were taken with these leaf people by tourists,” he said. “They were really popular.”

Lots of towns have called to find out how they make their leaf people.

The past few years the population of leaf people in Brandon has diminished. The downtown has undergone an $30 million reconstruction for almost four years, Carr said.

Brandon has “kind of laid back off” the leaf people a little bit to let the new improved and beautified downtown streetscape shine and not let it be overtaken by the glitz and glamor of the leaf people.

This year 65 foliage figures dot the Shelburne landscape with their skeletons made of wooden frames and a corn stalk running up their back and out their collar.

Unlike the most famous scarecrow, which foolishly followed a yellow road looking for wisdom, these leaf people have brains. For example, check out the frond female standing next to the free little library in the village, clearly interested in finding the right book to leaf through.

The leaf people in Shelburne had been on hiatus for a couple of years after Cooley stepped down, until one fateful night when Pinney queried her husband about what had happened to Shelburne’s fall vegetative visitors.

Later, he ran into Colleen Haag, who was town clerk at the time, and said, “Gracie’s going to bring the people back.”

Haag directed the couple to a barn at Shelburne Farms where the leaf people had been vegetating for two years.

Looking at the mess, Pinney thought, “Oh dear! What have I gotten myself into?”

Pinney had to strip them down and make new frames, but her first year she had 75 leaf people.

Most years they lose about 10, some to breakage, some to theft. Cooley suspects the ones that disappear magically reappear in a college fraternity somewhere.

Pinney works on them in her barn when she can grab a few minutes between her work at a wholesale florist. She admitted, as she works, she talks to the leaf people.

She did not admit whether any ever replied.

People from Automaster bring a van and help Pinney put up the leaf people. Their corn stalk backbones were donated by Mack’s Farm in Charlotte.

“Anybody can make a scarecrow, but it’s how you dress them,” Pinney said.

During the year she scours Goodwill for the next fall’s finery.

However, what Pinney brings to autumn in Shelburne is more than how she dresses them. As you drive around town, you will notice how well the leaf people complement or match their surroundings.

The leaf person who stands in solemn sentinel near the war memorial in the village green wears a scarf and dress with red, white and blue stripes. A leaf lady stands in front of the Shelburne United Methodist Church in formal attire in hues that echo the church’s stone blocks.

At the gate to Shelburne Farms two women and a girl are perpetually clothed in summery dresses appropriate for a stroll on the grounds.

One year, Pinney costumed a pregnant leaf person. She would go out at 5:30 a.m. before going to work and add stuffing to the belly.

By the end of the season, there was a leaf mother holding a baby, er, leaflet?