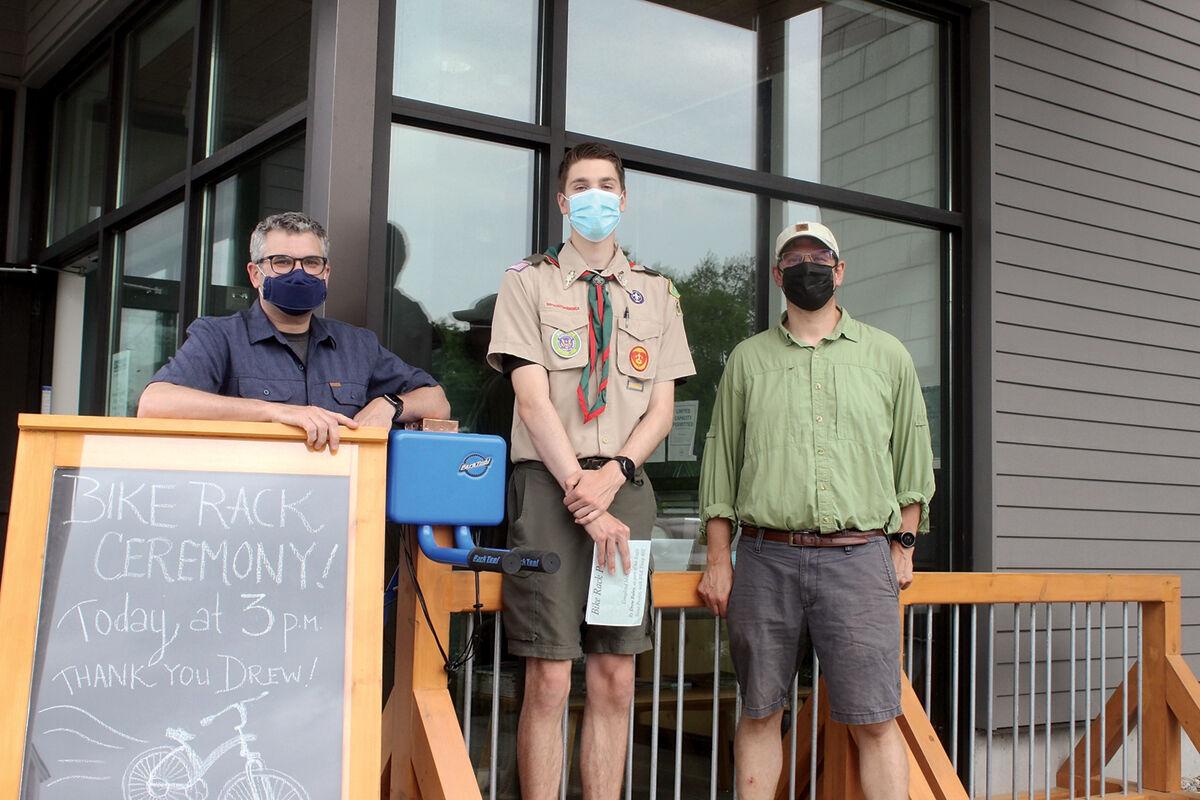 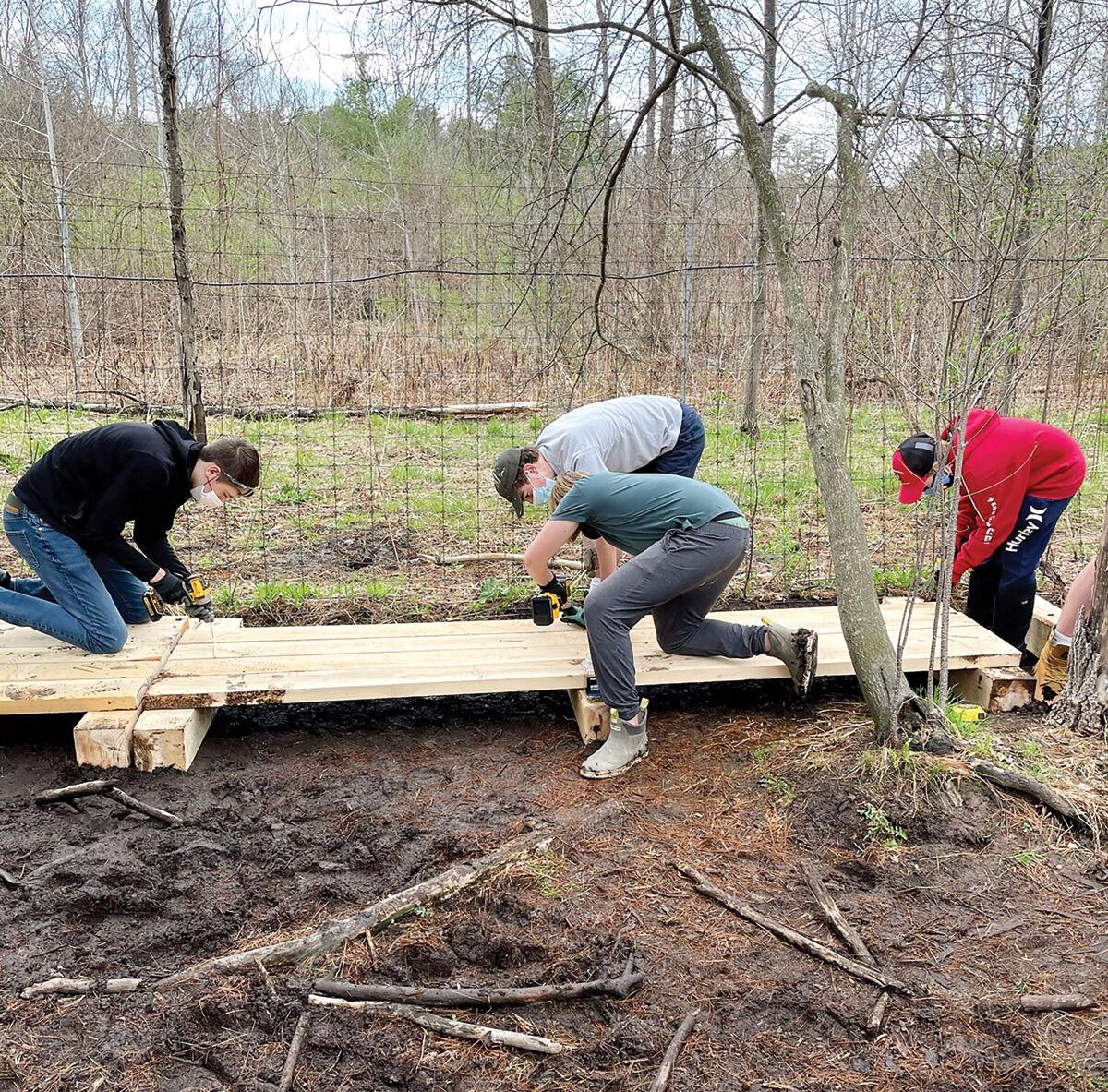 Scouts from Troop 602 work on a boardwalk across a muddy area at the Shelburne Dog Park, helping John Curley with his Eagle Scout project.

Scouts from Troop 602 work on a boardwalk across a muddy area at the Shelburne Dog Park, helping John Curley with his Eagle Scout project.

Drew Buley said it took a village to build the bike racks and sandwich sign at the Pierson Library.

Although the junior at Champlain Valley High School put in many hours on the project, its successful completion was made possible by help and contributions from a number of Shelburne individuals and businesses, he said.

Buley is one of three members of Shelburne’s Troop 602 on the verge of earning the rank of Eagle Scout.

Three is a big number for a troop the size of Shelburne’s, which averages 15-18 members, Scout master Brian Irwin said.

“Four percent of all the kids that start out in Scouting will end up going all the way through to Eagle,” Irwin said. “All the requirements have to get done before their 18th birthday.”

Irwin attributes the vitality of the Shelburne Troop to community and family involvement.

“It’s not just the Scouts, but the families are really involved. We have siblings joining us on trips sometimes and lots of parent involvement,” he said.

In addition to Buley, John Curley and Matt Ireland, both seniors, are well on their way to earning Eagle Scout rank.

After an Eagle candidate finishes his project, a lot of work remains.

The Scout has to submit a portfolio to the state organization, including letters of recommendation, a personal statement, the concept behind the project, its implementation and results, Irwin said.

Then, a regional board reviews the portfolio, sitting with the Scout for an hour assessing the value of the project, reviewing the candidate’s merit badges, asking questions about the candidate’s experience in the Boy Scouts and deciding if the body of work fulfills the requirements of the Eagle Scout rank, Irwin said.

For his project, Curley built a boardwalk and planted grass to naturalize a muddy area at the front of the Shelburne Dog Park on Harbor Road.

Ireland built a display case for the Shelburne Historical Society.

All three have been working on their projects for at least a year and a half. Even if the pandemic had not interrupted their efforts, an Eagle Scout project involves a lot of planning and approval from the regional Green Mountain Council of the Boy Scouts, Irwin said.

“In addition, they have a whole series of other requirements over the course of several years to get to the highest rank in scouting,” he said. “It’s a commitment over time.”

Some tasks are physically demanding, some require a lot of time and some require outdoor skills, Irwin said. In general, the requirements are intended to instill leadership skills and a commitment to community service.

Curley said Troop 602 is more active than a lot of other troops because of its connection to Shelburne. “It’s taught me the importance of giving back to one’s community,” he said.

His project has taught him about the importance of planning ahead that he thinks will help him throughout his life.

Because the dog park is partly in a wetlands area, there were applications that needed to be submitted to state officials, Curley said. He had to wait for three months because of pandemic-forced state shutdowns.

“You really can’t wing it in the moment,” he said.

He received donations of lumber from Clifford Lumber in Hinesburg and seed and topsoil from Gardener’s Supply in Williston.

Ireland said he also learned a lot about planning ahead as he worked on his display cases at the historical society.

“There was a lot of designing. We had to do to make it fit the space,” said Ireland, who got lumber donated by Lowe’s. “It was my first major woodworking project.”

As he began to put the pieces together, he enjoyed seeing the progress. “It was very rewarding to finally finish.”

For his bike rack project, Buley said the lumber was locally harvested and donated by Shelburne Farms, and milled by The Tree House Hardwoods and Mill Shop. Aubuchon Hardware donated half the cost of the display case hardware.

The bike rack includes a bike repair station that was paid for by donations from Shelburne residents. Besides the bike rack and repair station, Buley also built a wooden sandwich board for announcing library news and events.

Irwin said Troop 602 has four candidates who look to be in good shape for earning the ultimate Boy Scout rank in 2022.

The Pierson Library will host a completion ceremony Saturday, May 22, 3 p.m., for a recently completed Eagle Scout project.