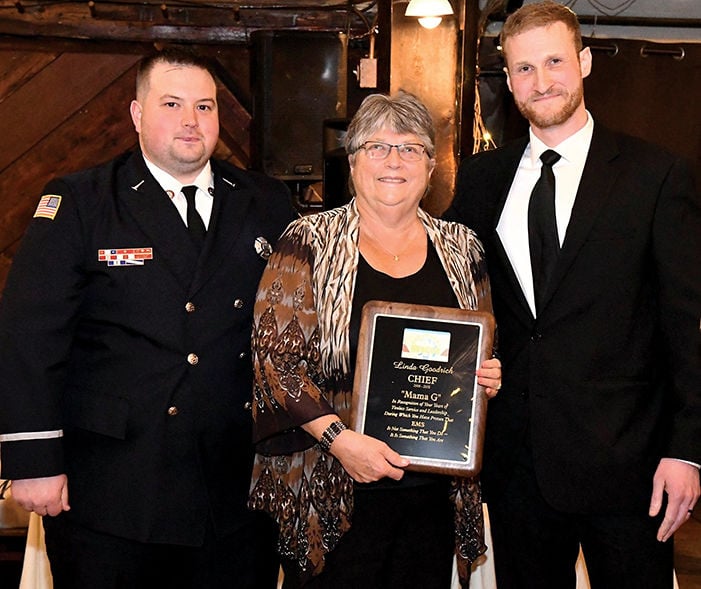 Left, former Shelburne Rescue Chief Linda Goodrich is flanked by Assistant Chief Devin Major, left, and Chief Jacob Leopold, right, at the annual Shelburne Fire and Rescue Awards Dinner on May 5. Goodrich, who retired as chief in 2018 after 12 years in the post, received special recognition and a plaque bearing her name and nickname, “Mama G.” 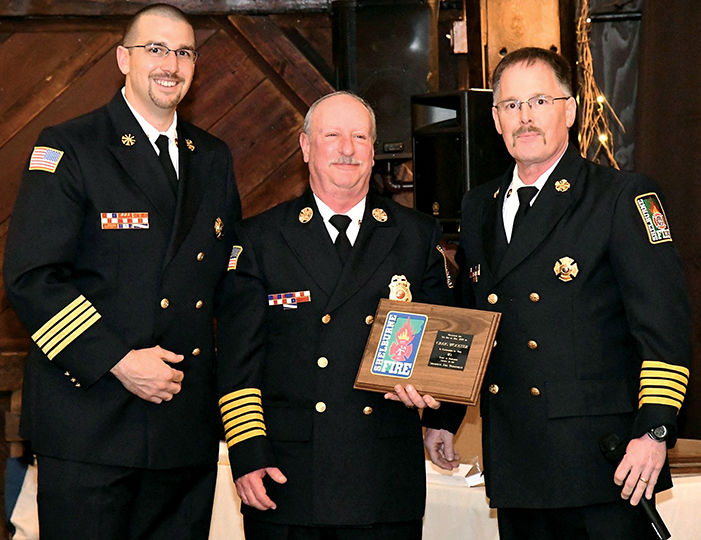 Left, former Shelburne Rescue Chief Linda Goodrich is flanked by Assistant Chief Devin Major, left, and Chief Jacob Leopold, right, at the annual Shelburne Fire and Rescue Awards Dinner on May 5. Goodrich, who retired as chief in 2018 after 12 years in the post, received special recognition and a plaque bearing her name and nickname, “Mama G.”

Shelburne Fire and Rescue departments celebrated last weekend at their annual awards banquet where numerous members were honored for their service as first responders.

The formal banquet was held at the Old Lantern Inn and Barn in Charlotte.

Town Manager Lee Krohn was chosen for the Ron Murdock Firefighter of the Year award. Krohn became town manager in 2018 but has served as a volunteer firefighter with the Shelburne Volunteer Fire Department since June 2014.

“The Murdock award is given to the firefighter who shows commitment to the department as well as dedication to his community,” said Fire Chief Jerry Ouimet.

First Lieutenant Dwight Mazur was named Fire Officer of the Year. Ouimet said that honor is decided by a vote of the department membership. Mazur also marked 10 years with the department.

The fire department’s Rookie of the Year award went to Greg Forsyth.

Shelburne Rescue also handed out awards and honored members marking milestones in their service with the squad.

A beloved member of the Shelburne Rescue family, Linda Goodrich, received special recognition. She retired as chief in 2018 after 12 years in the post. She received a plaque bearing her name and nickname, “Mama G,” that says it honors her “tireless service and leadership” and that she proved “that EMS is not something that you do – it’s something that you are.”

• Tom Candon received the Charlie Phelps Award which Leopold described as “recognition of staying power, dedication to family and the pursuit of knowledge in EMS.”

• The Joan Foster Award went to Megan Cross, in recognition of “excellence in caring for the whole patient and in support of the squad,” Leopold explained.