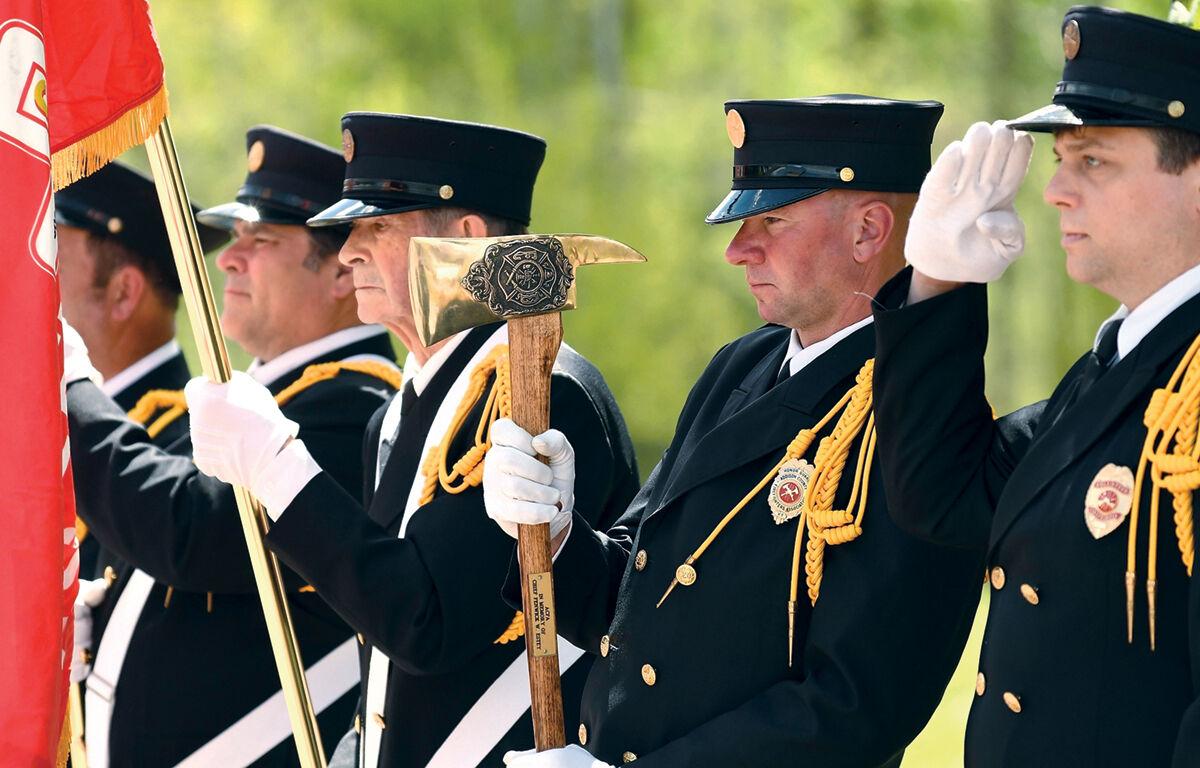 Members at attention. The ax is a traditional element of the Honor Guard, representing a basic tool that’s been used by firefighters for many years. 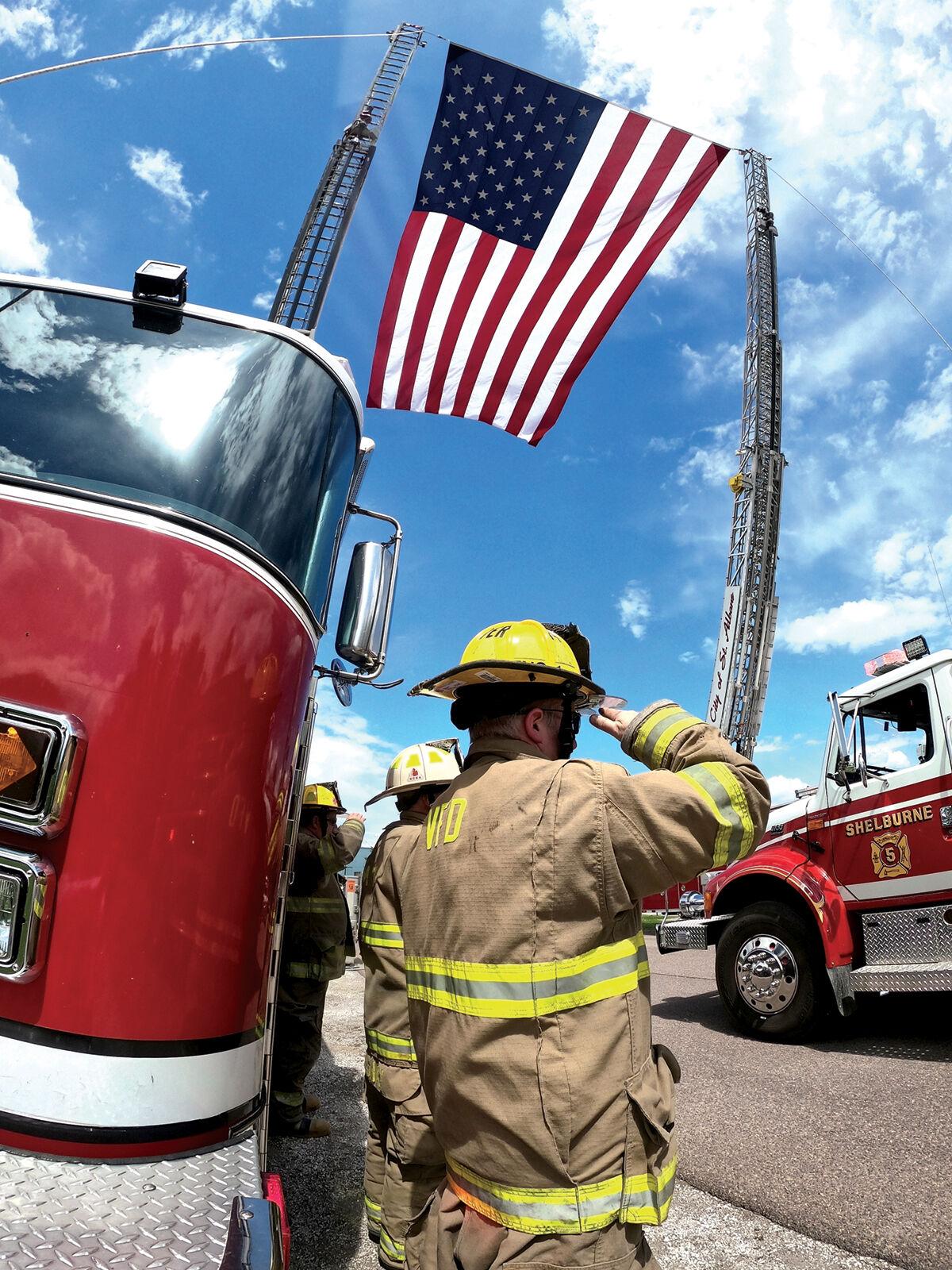 Shelburne rescue and fire personnel and many others pay tribute to Kristy Oxholm May 14, a volunteer firefighter who died in early May. 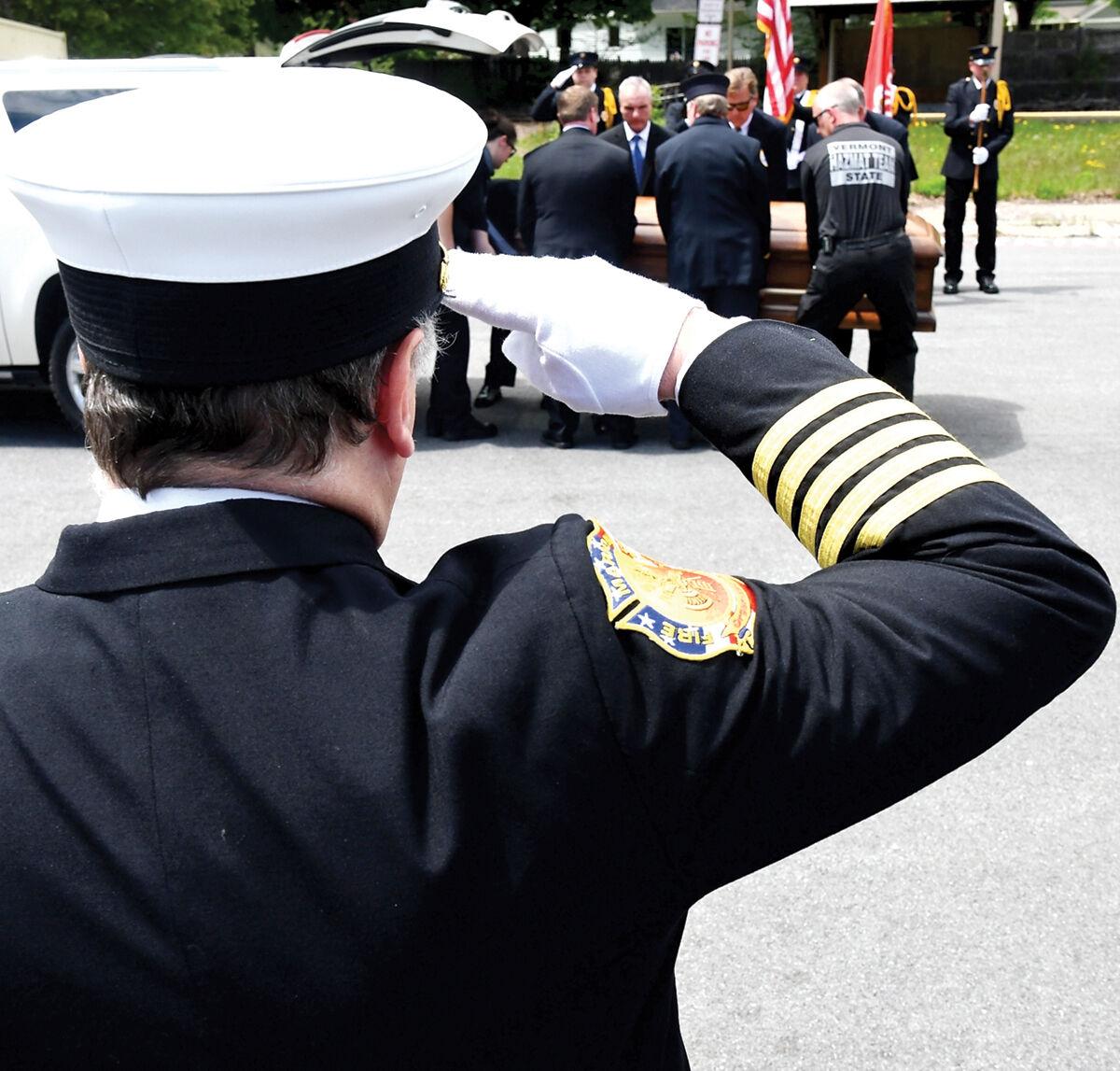 A procession of fire and rescue vehicles from Shelburne and beyond makes its way through the village in a tribute to firefighter Kristy Oxholm. 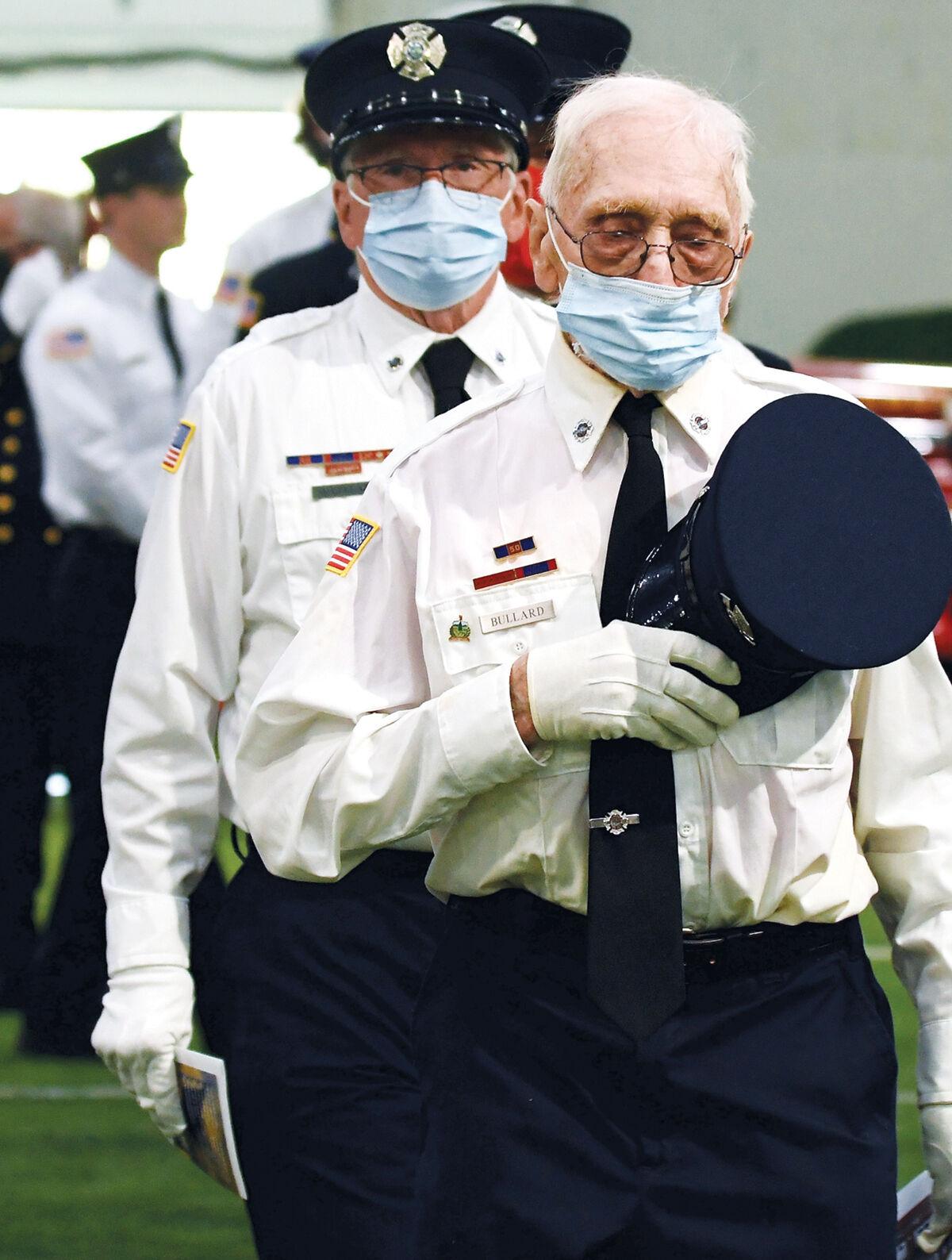 At least 100 firefighters and rescue personnel, including Cullen Bullard, a 50-plus year member of the department, attend the funeral of Kristy Oxholm in Shelburne.

Members at attention. The ax is a traditional element of the Honor Guard, representing a basic tool that’s been used by firefighters for many years.

Shelburne rescue and fire personnel and many others pay tribute to Kristy Oxholm May 14, a volunteer firefighter who died in early May.

A procession of fire and rescue vehicles from Shelburne and beyond makes its way through the village in a tribute to firefighter Kristy Oxholm.

At least 100 firefighters and rescue personnel, including Cullen Bullard, a 50-plus year member of the department, attend the funeral of Kristy Oxholm in Shelburne.

Before noon on Friday, May 14, fire trucks and rescue vehicles — many from out of town — began to gather at Shelburne Museum.

Around 1:15 p.m., the vehicles began a slow procession to Church Street, stopping in front of Shelburne United Methodist Church and St. Catherine of Siena, joined by ranks of uniformed rescue workers from around the region.

The solemn column of mourners marched down Harbor Road to the Shelburne Field House for the funeral of one of their own, firefighter Kristina Mercedes Oxholm, who everyone called Kristy.

Born on March 22, 1961, in Randolph, Oxholm graduated from Vergennes Union High School in 1979, and went on to earn an associate’s degree from Champlain College and a bachelor’s degree from Culver-Stockton College in 1983.

According to Oxholm’s obituary, she dedicated a significant part of her life to public service. As a teenager, she served as a page to the Vermont Legislature and volunteered on the Bolton Valley Ski Patrol.

She served on the Charlotte Rescue Squad as an emergency medical technician; served on the Vermont State Hazardous Materials Response Team; was a dispatcher for multiple police departments; and worked at General Electric, Vermont Gas and Michels Corporation.

“One of the most important parts of Kristy’s life was her dedication to being a firefighter,” Oxholm’s obituary said. “She volunteered at both the Charlotte and Shelburne Fire departments and served as the Vermont State Firefighters’ Association president from 2008-10. She was an instructor for the Vermont State Fire Academy and truly loved working with her students there.”

More than 200 attended Oxholm’s funeral. At least 100 of those gathered to celebrate Oxholm’s life and mark her passing were rescue personnel.

“Now I have to do something I’m both deeply honored to do and also really don’t want to do, which is tell you about my sister,” Scot Oxholm said.

Although his sister was 16 years older, more often than not, she treated her brother as an equal, he said. However, Scot Oxholm admitted, “It’s hard to expect a 23-year-old to treat a 6-year-old as a peer.”

Working in public service was something that came naturally to her, Oxholm said. “She didn’t expect praise or recognition for doing it. She just did it because it needed to be done.”

Tom Estey, who taught Kristy Oxholm for many years at the Vermont Fire Academy, said she was always willing to help.

He lauded her admiration and respect for others during her career as a volunteer firefighter and EMS technician.

“The harmony that motivated her should serve as an inspiration for the present and future generations and remain as a model for tolerance and friendship,” Estey said.

Oxholm became a firefighter when there were few women in the field.

“She was the second state fire instructor in the state of Vermont and the first president of the Vermont State Firefighters Association,” said Estey.

Ted Parsons, Oxholm’s co-worker at Michels Corporation, where she was a health, safety and environment coordinator, said, “Kristy was somebody who could look you in the face and tell you that you were wrong. Then give you a hug.”

“As you can see, she touched a lot of lives and left an impact on everyone she met,” Oxholm’s friend Tiffaney Fisher said.

“She was always all in,” Oxholm’s brother Steve Oxholm said, whether it was theater in college and high school, working at Vermont Gas or Michels Corporation, serving on the rescue squad or the fire department, teaching or spending time with family and friends.

Rev. Elliott Munn, who officiated, said he had been told Oxholm trained at least one firefighter at every fire station across the state.

“She devoted her entire life to caring for a broad network of friends here in Vermont. She gave of her time, her creativity and her strength,” Munn said.

At the end of the service, the funeral procession traveled to the Shelburne Volunteer Fire Department for the last alarm bell and last call ceremonies.

According to the fire department, the firefighter funeral service “is steeped in tradition 200 years old. One such tradition is the sounding of the bell.”

Over the centuries, a bell has rung to summon firefighters to a call, and the bell signaled a fire call’s end.

A bell rang Friday to signal that Kristy Oxholm had reached the end of her duties.

After the bell ringing, Shelburne dispatch placed a last radio call to the fire station. Over the scratchy loudspeakers, those gathered to commemorate the life of Kristy Oxholm heard the dispatcher call for the fallen firefighter:

“Having heard no response from firefighter Oxholm, we know that Kristy has responded to her last call on earth and that the fire department in the hereafter has a new responder. Kristy served the citizens of Shelburne and the fire service throughout Vermont for over 30 years. We appreciate Kristy’s dedication and her family’s sacrifices during the time she was a firefighter.”

“Amazing Grace,” played on the bagpipes, ended the ceremony.

Fire and rescue personnel from around Vermont out in force to honor longtime Shelburne Fire Department member Kristy Oxholm, who died in May. …