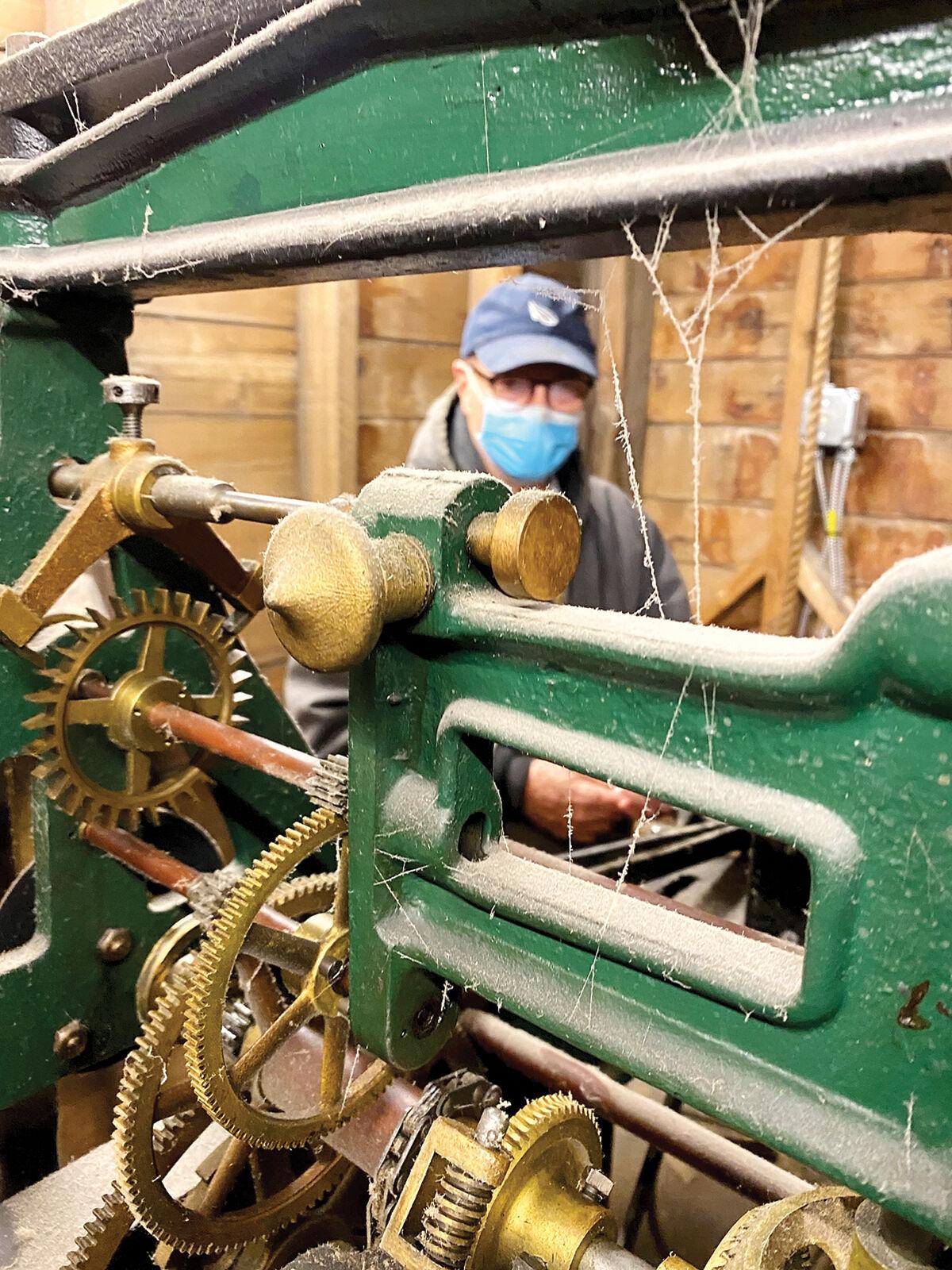 Fritz Horton looks over the clockworks in Shelburne’s clock tower. 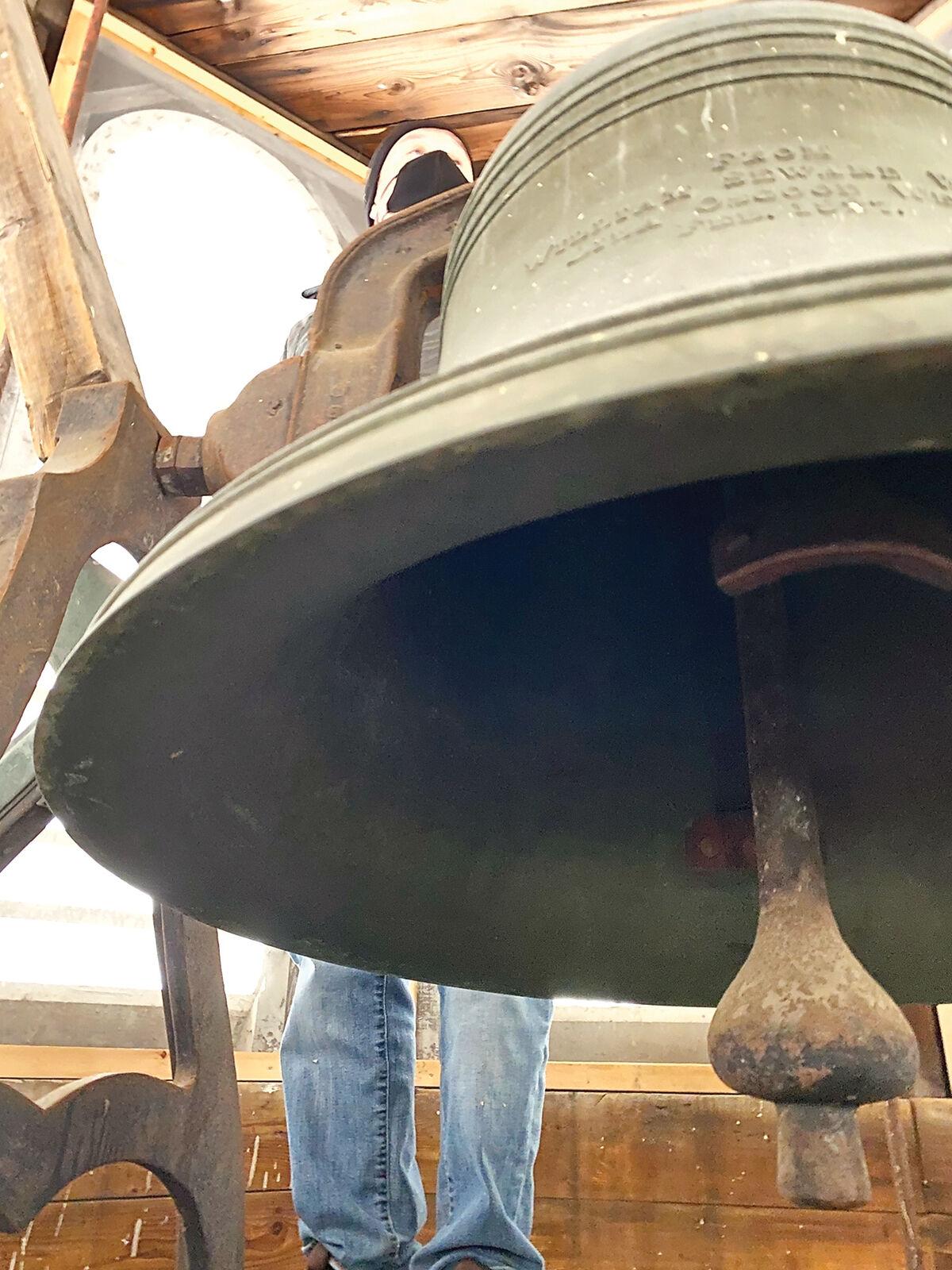 Fritz Horton looks over the clockworks in Shelburne’s clock tower.

After decades of silence from a bell that doesn’t ring, and decades with the clock stuck at 3:05, it’s looking like Shelburne will soon have a clock tower that both chimes and keeps time.

The clock tower on the Shelburne Town Hall has tolled intermittently since the town meeting facility was built in 1927, after a fire destroyed its predecessor a couple years prior.

Dorothea Penar, a member of the town’s historic preservation and design review commission, said the Burlington Free Press from December 1925 describes the fire, which started in a school and spread to town hall.

Electra Havemeyer Webb, the founder of the Shelburne Museum, had the town hall rebuilt in honor of her late father.

Webb provided the building and all the fixings, according to Fritz Horton, chair of the commission, “down to the cutlery and everything in the meeting room — all the furnishings, everything.”

Horton has headed up the efforts to raise money to get the clock and its bell working again.

He’s also been periodically making the treacherous and cramped climb up an 8-foot step ladder, to then shimmy up a tight access hatch in the ceiling of the town hall’s balcony.

It’s not a climb for the faint of heart and thankfully this reporter had just enough grit to climb up to the bell and its workings.

Made from almost 100-year-old timber, with rungs that are barely and inch wide, the ladders are a test of faith. It is also a dusty and strenuous exercise that taxes one’s skills as a contortionist.

On Thursday afternoon, Dec. 10, Horton inspected the bell and Bob Neeld, a structural engineer and one of the founders of Engineering Ventures, inspected the clock tower itself.

Horton was experimenting to see how much force and how long the stroke of the hammer should be to have the bell ringing just right.

Neeld was making sure the ringing of the bell didn’t compromise the structural integrity of the tower.

“Before the 1950s there was an issue about vibrations,” Horton said. That may be one of the reasons the bell stopped ringing.

But Horton believed the vibrations are normal and the tower is in fine shape.

“There is no threat to life by ringing that bell,” he said.

Nonetheless, Neeld is particularly suited to confirming Horton’s convictions. He supervised the renovation and addition to the town of the Pierson Library and is more than familiar with the clock tower.

Neeld, a structural engineer for more than 35 years, has tackled many renovations.

“I deal with a lot of existing building work, so that’s been really my forte,” he said.

The bell had been silent for an unknown amount of time when, in 1959, Webb wrote a letter to the town asking why it wasn’t working.

No one seems to know why it wasn’t, Horton said.

In the 1980s the Shelburne Historical Society took on the project of renovating the clock tower and got it working again, he said, and in 1987, the historical society held a ceremony, rededicating the clock after its restoration.

“And it ran for a while,” Horton said, but he doesn’t know for how long. At some point the clock was turned off.

Again, no one has a definitive answer why.

Horton has talked to people who were alive then, but he has not found anyone who remembers why the electric clock was turned off and the bell was silenced.

“Nobody can figure out why it stopped,” he said. “But I think I know.”

Horton’s theory is that in the 1980s, with the event of digital watches, people had access to inexpensive and pervasive timepieces much more accurate than watches had ever been.

The old clock works were not nearly as accurate, he said.

“This thing can vary three to five minutes over a period of a week or two. And so, my guess is it became an annoyance. At one time folks marked the time by the bells,” Horton said. “When they’re striking three to five minutes late or early, it becomes a little bit disconcerting. It loses credibility. I think they just let it stop.”

During the course of just two weeks in October, the effort to restore the clock tower raised $16,000 from 86 donors, far surpassing the estimated $14,000 project cost.

A matching grant kicked in $7,000. No town public funds have been used, Horton said.

The $23,000 total will go to restoring the clock and its bell, paying for maintenance and hiring a town winder.

A town winder was at one point a common job; a person designated to get directions from the clock makers about a clock’s upkeep.

Standing in the town hall tower, examining the clockworks, Horton said, “This needs oiling periodically and care and resetting the clock and checking things out.”

The town winder will be paid a small stipend for performing these duties in a timely fashion. And given a crest. They may be asked to join town parades.

The town winder position is all over the world, Horton said. “These things have to be watched over — no pun intended.”

He said the clock will be connected to a GPS controller, so the time will be much more accurate. The town winder will need to periodically correct it, but it won’t be anything like three to five minutes off a week.

Horton has a deadline for the completion of the renovation of the clock and its bell. He’s confident it will be finished in time to ring on Town Meeting Day in March.

For whom the bell tolls: Clock could ring again

When Stuart Morrow, of Shelburne, was a child, the historic clock atop Shelburne’s Town Hall still worked. But nothing gold can stay, it seems…