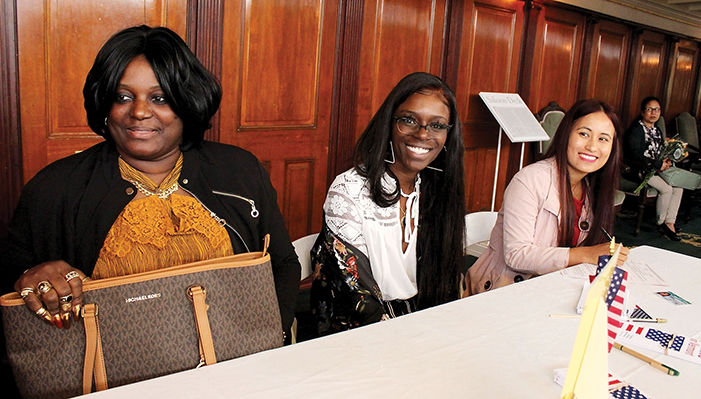 From left, Juline Hazel of Jamaica, Shaneal Wynter of Jamaica and Namgay Dema Sherpa of Bhutan wasted no time in assuming their civic responsibilities by registering to vote right after being sworn in as U.S. citizens on Tuesday at Shelburne Museum. 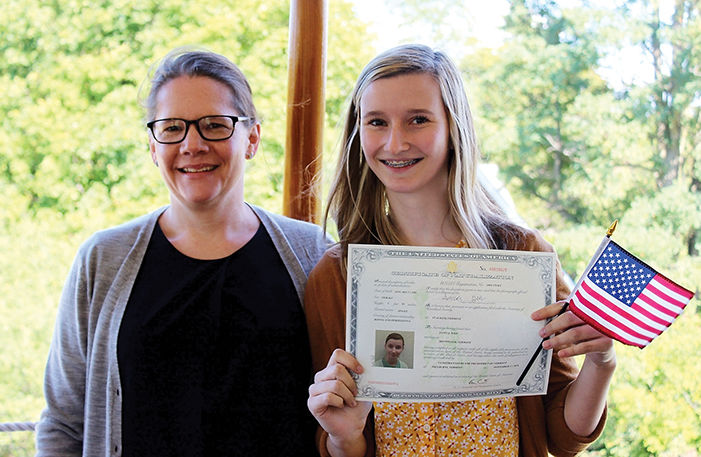 From left, Juline Hazel of Jamaica, Shaneal Wynter of Jamaica and Namgay Dema Sherpa of Bhutan wasted no time in assuming their civic responsibilities by registering to vote right after being sworn in as U.S. citizens on Tuesday at Shelburne Museum.

Fifteen people from 11 different countries celebrated Constitution Day and Citizenship Day on the steamboat Ticonderoga at Shelburne Museum on Tuesday.

By renouncing their citizenship to Bhutan, Jamaica, Nepal, the Philipines, Brazil, Somalia, Ghana, China, Canada, Bosnia-Herzegovina and Myanmar, and taking the Oath of Allegiance,  they are now citizens of the United States.

Patricia Casey, Naturalization Deputy for the Federal Court, greeted people as they arrived on Sept. 17 and administered the oath during the ceremony.

She said that she’s been helping with naturalization ceremonies for over a decade and does so 24 times a year around the state. Asked what her best memory was those ceremonies over the years, Casey said, “They’re all amazing. This is the best part of my job, and I’m sure all the judges agree.”

Mu Rie Chee, originally from Myanmar, said she was very happy that her citizenship day was finally here. “It’s been a long time,” she said.

New American citizen Sanela Bikic from Bosnia-Herzegovina said one of her best memories was “seeing my dad after three years in Burlington.” She said he had come to the United States before Bikic and her mother and it was hard waiting to see him.

Amy Cunningham has been in a mentoring program with Bikic since around the time she was 6 years old, but rather than molding Bikic, Cunningham said, “She’s been a good influence on me.”

Originally, Citizenship Day was called I Am an American Day and was celebrated in May, but in the 1950s, it moved to Sept. 17 and the name was changed. President Harry S. Truman, who believed that not understanding civic responsibility was one of the biggest dangers to free government, was instrumental in making the name change.

Following the swearing-in ceremony, many of the new citizens practiced their civic responsibility by registering to vote at a table staffed by the Vermont League of Women Voters.