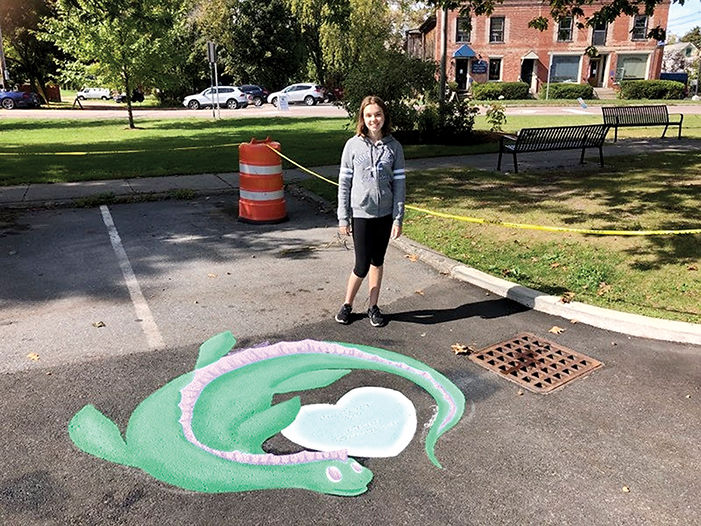 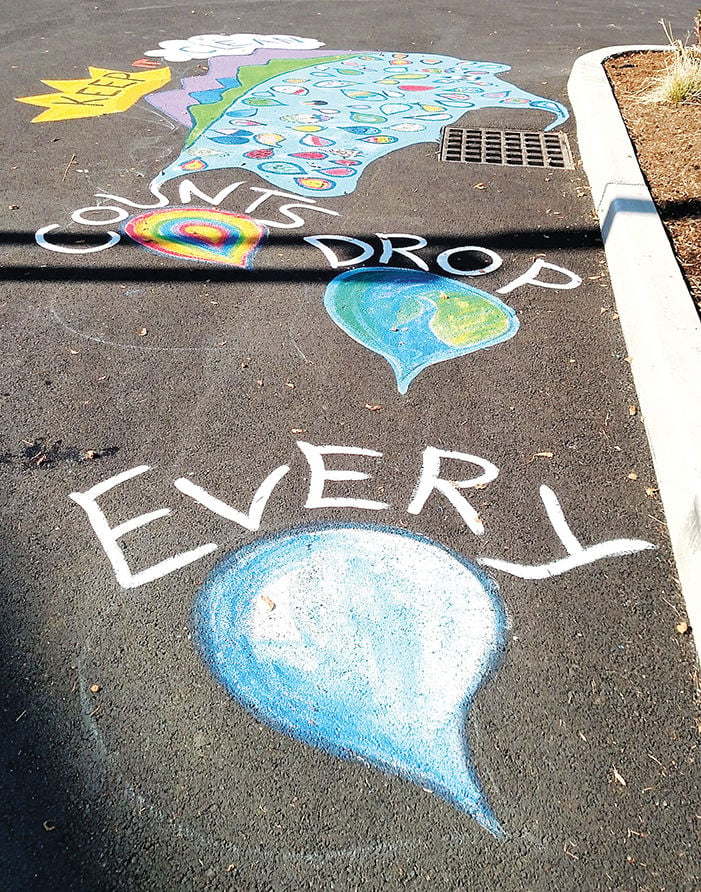 Julie Holmes’ completed storm drain mural, located next to the Pierson Library in Shelburne, displays the message, “Every Drop Counts.”

Julie Holmes’ completed storm drain mural, located next to the Pierson Library in Shelburne, displays the message, “Every Drop Counts.”

The winners of Rethink Runoff’s storm drain mural contest brought paint to pavement in Shelburne village last week. The result: two colorful works of art to let passersby know that stormwater runoff should not be ignored.

Rethink Runoff is a project of the Chittenden Regional Planning Commission devoted to spreading awareness about the dangers stormwater runoff can pose to the environment. It launched its Shelburne storm drain mural contest last month, asking competitors to design a mural — to be painted next to a storm drain — that conveys a message about the hazards of the pollutants in stormwater runoff.

“The hope is that the murals will spread the word that stormwater contamination is a real issue, and one which does not get enough attention,” explained Kristen Balschunat, a conservation specialist and contest organizer.

On Friday, Sept. 27, the winners of the competition, HeatherAnne Lee and Julie Holmes, brought their designs to fruition in Shelburne village.

Lee, a sophomore at Champlain Valley Union High School and Shelburne resident, recruited the help of her friend and classmate Muriel Spell to create her mural next to a storm drain across Falls Road from the Shelburne Country Store. Lee’s design features a creature she imagines as Champ, the legendary lake monster rumored to inhabit Lake Champlain. Whether Champ exists or not, the mural sends the message that creatures in Lake Champlain are being affected by polluted stormwater.

When asked how she chose her design, Lee explained that she wanted to paint “a cute animal that no one would want to see harmed.” The bright green creature on the pavement has an attention-getting smile and the message: “Keep the Water Clear, Remember Champ Lives Here.”

Across Route 7, Charlotte artist Julie Holmes created her mural just outside the brand new Pierson Library. It has a different message: “Every drop counts,” which Holmes said has two meanings.

Holmes had help with her mural from students from Visanthi Meyette’s sixth-grade class at Shelburne Community School. Each student painted one water drop with whatever design they wanted.

Meyette, who watched the artists at work, said the children have been learning about stormwater in an ecosystem unit. The project gives them a chance to spread the word to local residents and visitors.

“Nothing other than water should go in our lake; everyone should understand that,” said sixth- grader Charlie Baird. Working alongside her, classmate Marin Walsh declared that “art is a wonderful thing,” and can be a valuable tool for environmental activism.

Shelburne is the fifth town in Chittenden County where Rethink Runoff has facilitated the creation of storm drain murals. Others can be found in Milton, Winooski, Burlington and Essex Junction, said to Balschunat.

In addition to the murals, the organization has volunteers called the Stream Team, who engage in projects such as stream clean-ups and water quality monitoring. Rethink Runoff emphasizes that there are steps anyone can take such as avoiding harmful lawn fertilizers and picking up dog waste that reduce harmful stormwater runoff.

“Everyone can help, and the problem can’t be solved by one person,” Balschunat said.

More information about Rethink Runoff is online at rethinkrunoff.org.