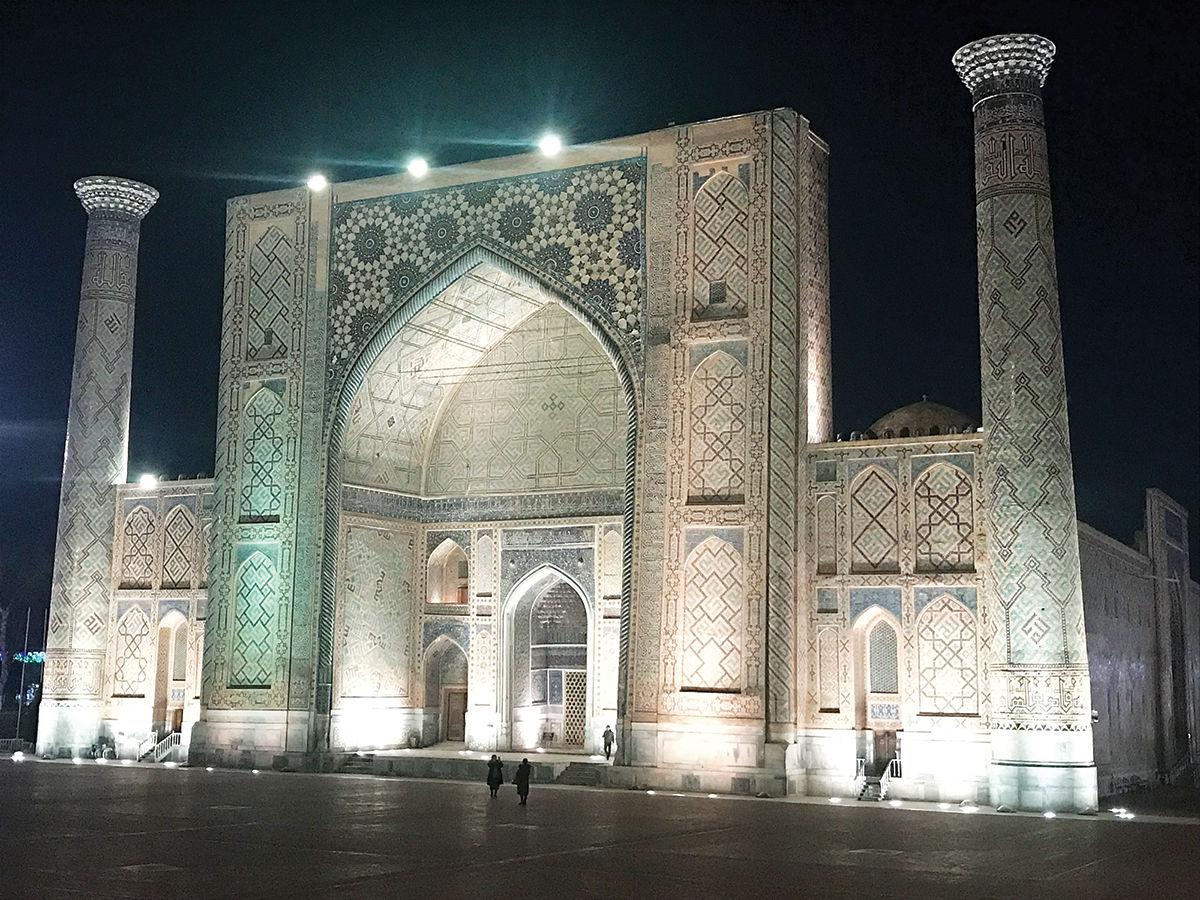 Ulugh Beg Madrasa, built 1417-1420, is one of three madrasas or educational institutions in the Registan in Samarqand, Uzbekistan. During his six weeks teaching STEM to teachers, Charlotte Central School Digital Learning Leader Allan Miller would often run by here, sometimes stopping and reflecting about how long civilization existed at this site. 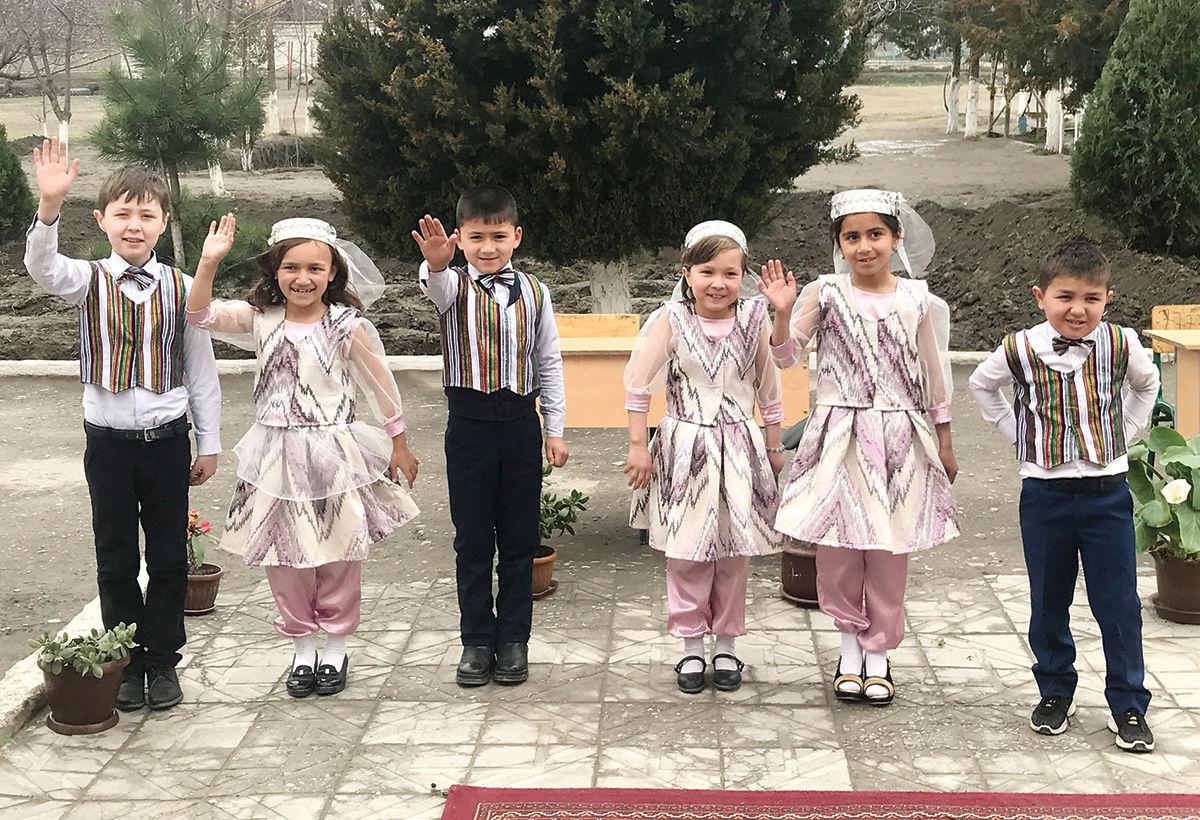 Second grade students greet visitors at their school in Uzbekistan. 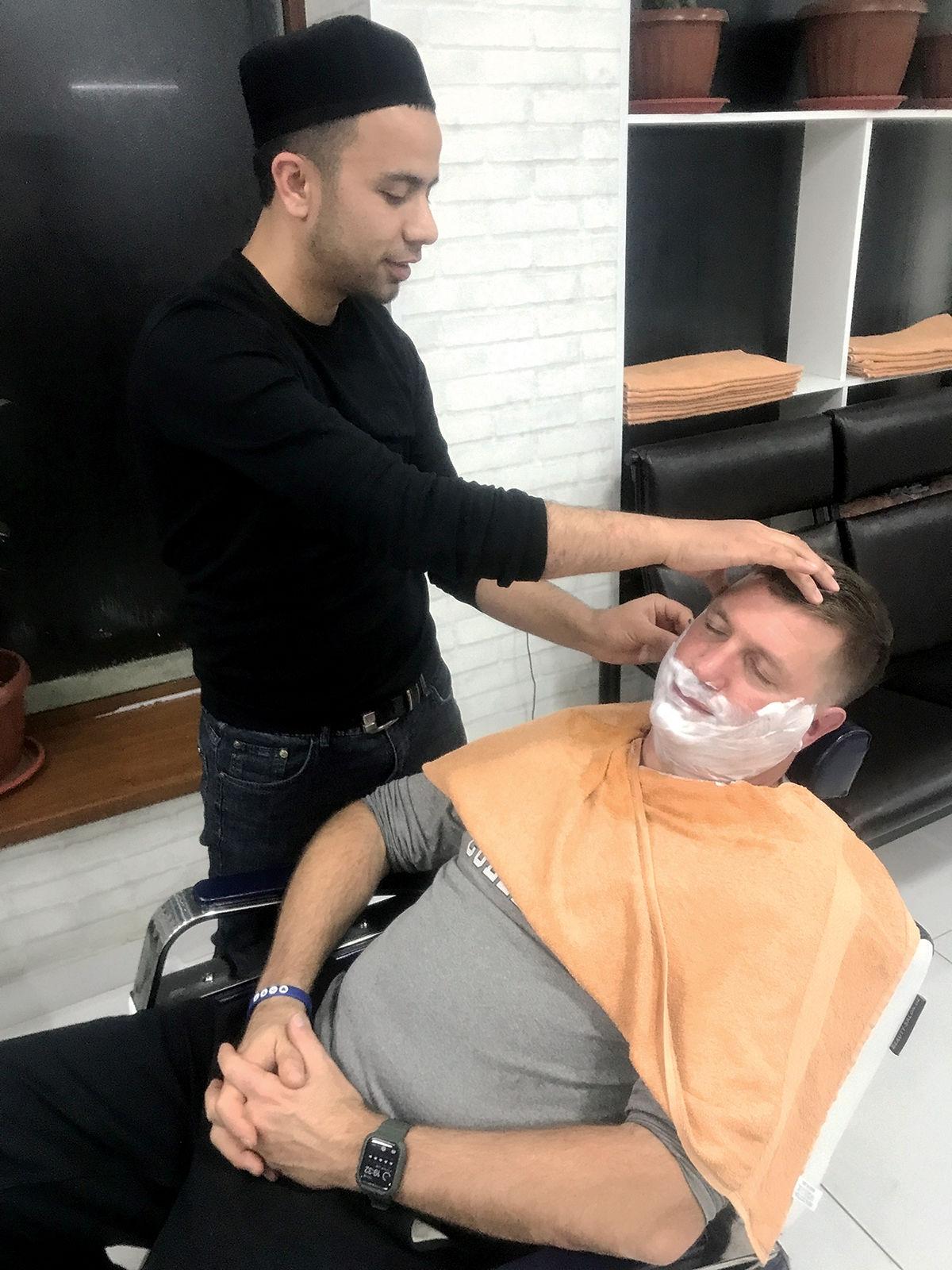 Allan Miller gets a straight razor shave from barber – and new friend – Davlat, while in Uzbekistan.

Ulugh Beg Madrasa, built 1417-1420, is one of three madrasas or educational institutions in the Registan in Samarqand, Uzbekistan. During his six weeks teaching STEM to teachers, Charlotte Central School Digital Learning Leader Allan Miller would often run by here, sometimes stopping and reflecting about how long civilization existed at this site.

Second grade students greet visitors at their school in Uzbekistan.

Allan Miller gets a straight razor shave from barber – and new friend – Davlat, while in Uzbekistan.

Driving across the mostly dry and largely treeless landscape of Bukhara, Uzbekistan, and chatting with a talkative driver, Allan Miller realized the conversation going on in the backseat might be a sign he was making a difference in the Central Asian country.

On the first day of his classes in Samarqand, where he went for six weeks to teach teachers to use many of the techniques practiced in the Champlain Valley School District, Miller had given the Uzbek teachers in class a survey.

One of them, Susannah, had returned hers with the question: “What the hell is STEM and why do we need it in our school?”

This was a pretty important question because STEM (science, technology, engineering and mathematics) was fundamental to why Miller had been sent abroad.

The digital learning leader and performance-based learning coach at Charlotte Central School was sent by a Fullbright program with the U.S. State Department to share ways of teaching proficiency instead of rote memorization.

After 35 years of teaching science with a seven-year hiatus as a principal at Shelburne Community School, to say that Miller is passionate about innovative ways of teaching STEM is an understatement.

When the embassy asked if Miller would make the almost four-hour train trip from Samarqand to Bukhara to teach teachers there about STEM, he had asked if he could take two teachers with him – Yelena ... and Susannah.

They were met at the train station by the driver and a teacher. Susannah and Yelena rode in the backseat with the Bukhara teacher between them. On the drive to the school, they shared their newfound enthusiasm for the educational strategies Miller had been espousing.

Back at CCS, Miller said, “They gave her exactly what I’d been teaching them for three weeks.”

Susannah, he said, “had become a convert.”

“I worked intensely with 25 of them. In four weeks, they’d turned from teachers who didn’t understand STEM,” Miller said.

The week after he left, those same 25 teachers were leading STEM workshops around the country.

Transforming the Uzbek educational system has become very important to the leader of the country.

Mirziyoyev became leader in 2016 after the previous president of 25 years died. Since Mirziyoyev took the reins the country appears, Miller said, to have moved towards more “respect for democracy and religious freedom.”

“A lot of what I was teaching was critical thinking. It’s the core of STEM: How can you understand really complex ideas?” he said.

Uzbekistan is an Islamic country with around 95% of the people holding strong Muslim beliefs, but they also have recently begun to believe in religious freedom.

“That’s a new part of where they are as people,” Miller said.

Uzbek citizens can’t understand why just because they are Muslim that most Americans equate them Muslim terrorists, he said. “They are very confused by the attitude of the U.S. toward Islamic countries.”

During his stay, Miller would run in the mornings or evenings. He was fascinated by how in just over 3 miles he would pass through five centuries of culture.

On his daily runs he would usually travel past the Registan, a huge square with three massive centuries-old madrahs, or Islamic schools, in a city that had been a major trading center on the Silk Road between China and the Mediterranean.

He would often stop to stretch or just sit and reflect.

“Realizing that I was looking at a site that had been a hub of Islamic culture for 600 years was just awe-inspiring,” he said.

Samarqand was an appropriate city for Miller to have been sent to since it has a long history as a seat of scholarly study.

However, the average teacher salary is $200 a month.

Miller became friends with a teacher whose dream is to have indoor plumbing. He told Miller, “In two or three years, I can save enough money to have a shower and a bathroom.”

Part way through his sabbatical, Miller found a barber shop named Alaska. Having lived in Alaska for 25 years, he couldn’t pass up this opportunity.

“When else would I have the chance to visit ‘Alaska’ in Uzbekistan!” he said.

Miller went in and asked a barber named Davlat, “If I was Uzbek what hair cut would you give me?”

The haircut Miller got – short on the sides and longer on top – wasn’t that different than an American haircut.

What was different was the shave he got. “You need a shave,” Davlat said and pulled out a straight razor.

While Davlat worked, he talked. The barber had been living in Moscow but came back to Uzbekistan to get married. He’s got a baby due in September. He had never met an American before.

“What do you think about the fact that I’m Islamic,” Davlat said, “and I’ve got a razor to your jugular?”

“We laughed,” Miller said. “I let him put that razor to my jugular five more times during the next few weeks.”

In the grooming process, the barber and the teacher became friends, swapping Instagram posts: “Both of us are probably telling the story now,” Miller said.

They both hope that Miller will find a way to bring his family to Samarqand to meet Davlat.

And get Uzbek shaves?

After six weeks in Uzbekistan, Allan Miller was shocked flying back into the United States – on March 8 – at how different the response to the…