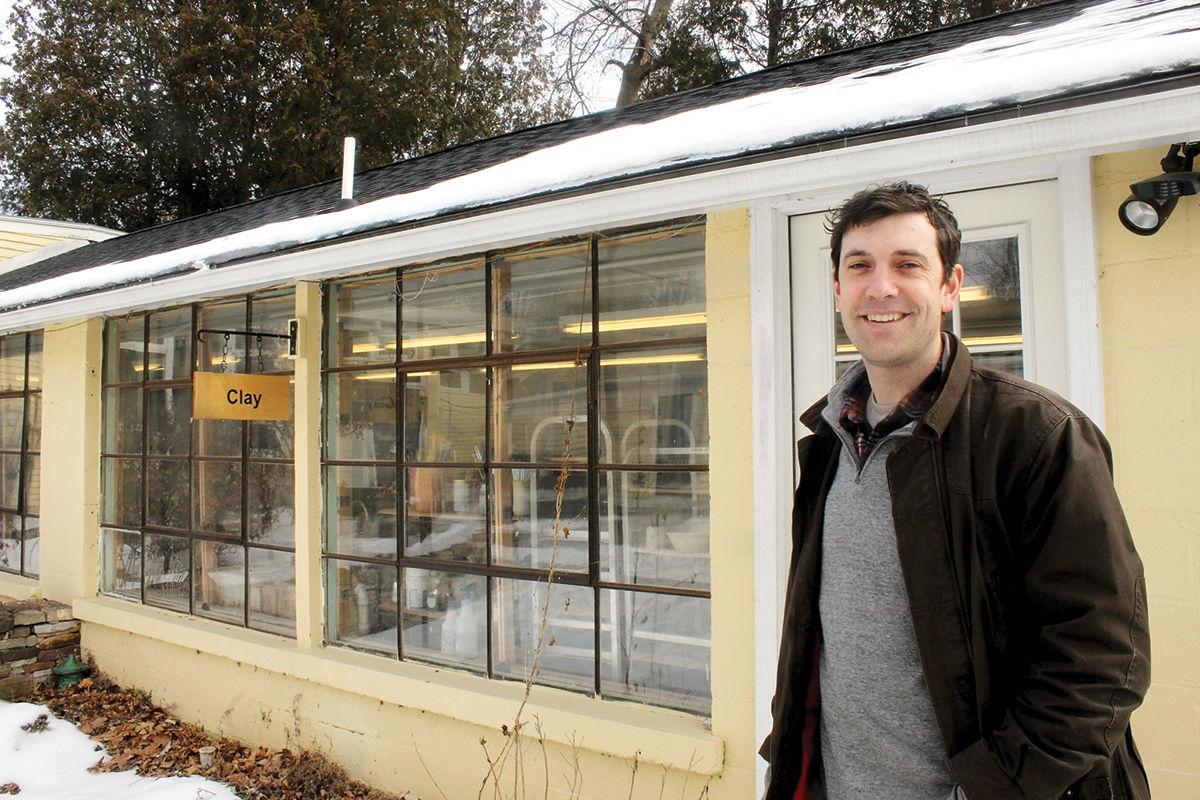 Jeff Beerworth, program director of the Shelburne Craft School, outside the pottery studio. 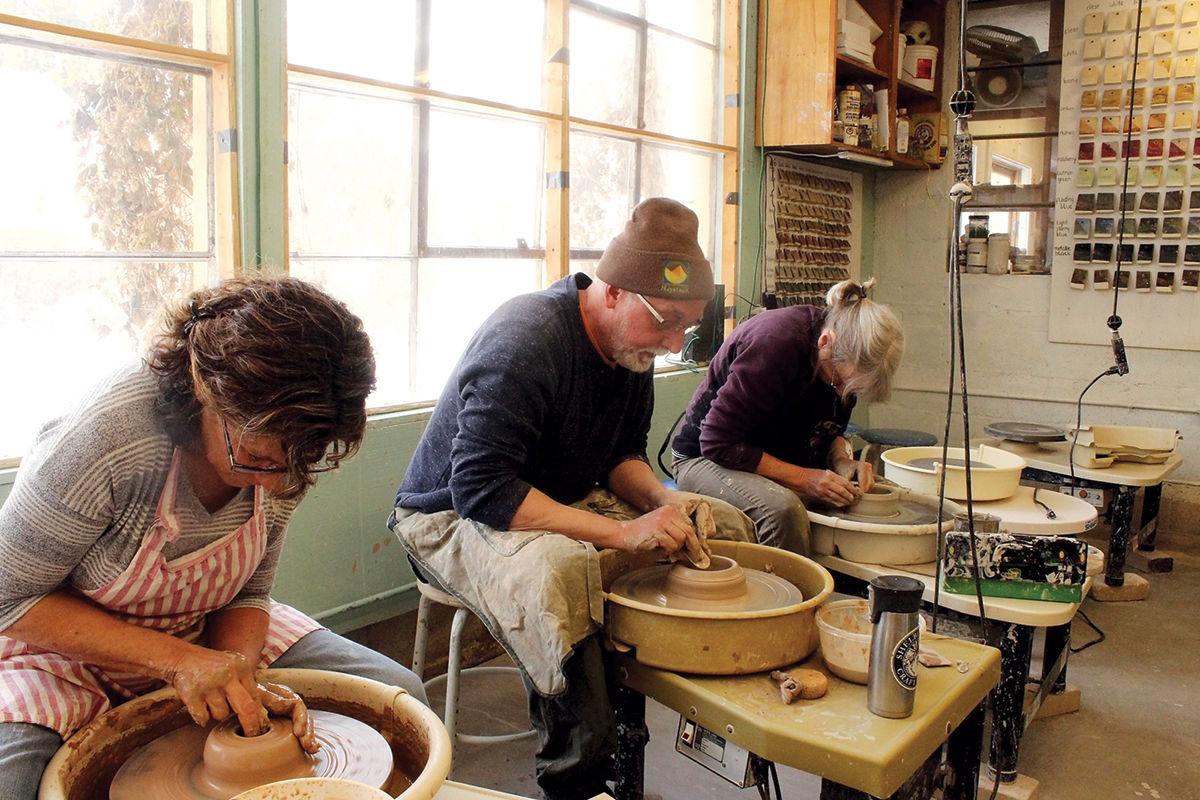 Rik Rolla, center, instructs and demonstrates for students of pottery at the Shelburne Craft School. The crafts school was officially founded in 1939 by Rev. J. Lynwood Smith in a corner of the boys’ locker room at Shelburne Village School with $200 from the state of Vermont. Smith, a local woodworker and the rector of Shelburne’s Trinity Episcopal Church, had started wood working classes the year before in the church basement.

Jeff Beerworth, program director of the Shelburne Craft School, outside the pottery studio.

Rik Rolla, center, instructs and demonstrates for students of pottery at the Shelburne Craft School. The crafts school was officially founded in 1939 by Rev. J. Lynwood Smith in a corner of the boys’ locker room at Shelburne Village School with $200 from the state of Vermont. Smith, a local woodworker and the rector of Shelburne’s Trinity Episcopal Church, had started wood working classes the year before in the church basement.

Jeff Beerworth of Charlotte is a Renaissance man’s Renaissance man. An artist, a police officer, a detective, an author, a singer-songwriter, a maker of bamboo fly rods, now he is the program director of the Shelburne Craft School. Creativity is his oxygen.

Beerworth grew up in North Troy, just few miles to the north is the Canadian border and not far to the west are the slopes of Jay Peak.

His winters were spent skiing and his summers fly fishing.

After graduation from high school, Beerworth attended Montserrat College of Art, north of Boston, where he studied painting, focusing on oil painting and fine arts. In his art, Beerworth focused on the more classical tradition and the painting techniques of the early Renaissance.

From art to law enforcement

With his art degree in hand, the artist returned to Vermont. Beerworth moved to Burlington where he joined the police department. After five years as a patrol officer, he became a detective, working homicides and human trafficking, and was the team leader on the crisis and hostage negotiation unit.

“It was awful stuff,” said Beerworth, “but important work to do.”

While still a detective, he found time to write a history of Burlington law enforcement. His book, “Historic Crimes and Justice in Burlington, Vermont,” was published in 2015, in time for the department’s 150th birthday. It gives a behind the scenes look at the 1865 slaying of Sally Griswold in Williston, the Mad Riot of 1898 and the first Burlington police officer killed in the line of duty, Officer James McGrath, as well as delving into the nature of policing and justice in Vermont’s largest city.

After 11 years with the Burlington Police Department, it was time for him to move on, so Beerworth decided to get out his supplies and refocus on art. Having four children at the time, he recalled needed to literally unpack his paints because they had been stored safely away from inquisitive toddlers’ hands due to their dangerous solvents.

Last October, Beerworth accepted the job as the program director at the Shelburne Craft School.

Although his winding career path may not be the norm, Beerworth doesn’t believe the diverse plethora of his interests and talents is unique - even among police officers:

“I wouldn’t say there’s a lot who follow the exact same track,” remarked Beerworth. “But, just like anywhere you go, people are people. There are interesting people everywhere. And there are hundreds of them on this campus.”

Beerworth also teaches oil painting classes at the school, which will celebrate its 75th anniversary on Oct. 3. They have about 1,500 students a year, he said.

In what might seem, with all of his interests, a limited amount of spare time, Beerworth has recorded several albums under the name Jeff Hahn.

Some of his songs have been used as background music on the Netflix series “The Ranch,” which also used music by his sister Anna Pepin and sister-in-law, Julia Beerworth, who perform as the Beerworth Sisters.

His song “Wine and Whiskey” is in rotation on Kenny Chesney’s Sirius XM radio station.

Although he’s been making, and sometimes selling, bamboo fly fishing rods for at least 11 years, in January, Beerworth launched Alton Bamboo Fly Rods. He said he chose the name Alton both because it’s his grandfather’s name and because the old English word ‘alton’ means source of a river. Beerworth handcrafts bamboo fly fishing rods as an alternative to “the more affordable, mass-production of fiberglass and graphite fishing rods.”

Throughout his various careers and artistic endeavors, one can see that Beerworth lives up to the Renaissance man moniker. When asked about this, the artist admits, in truth, it is indeed what his grandmother has called him.