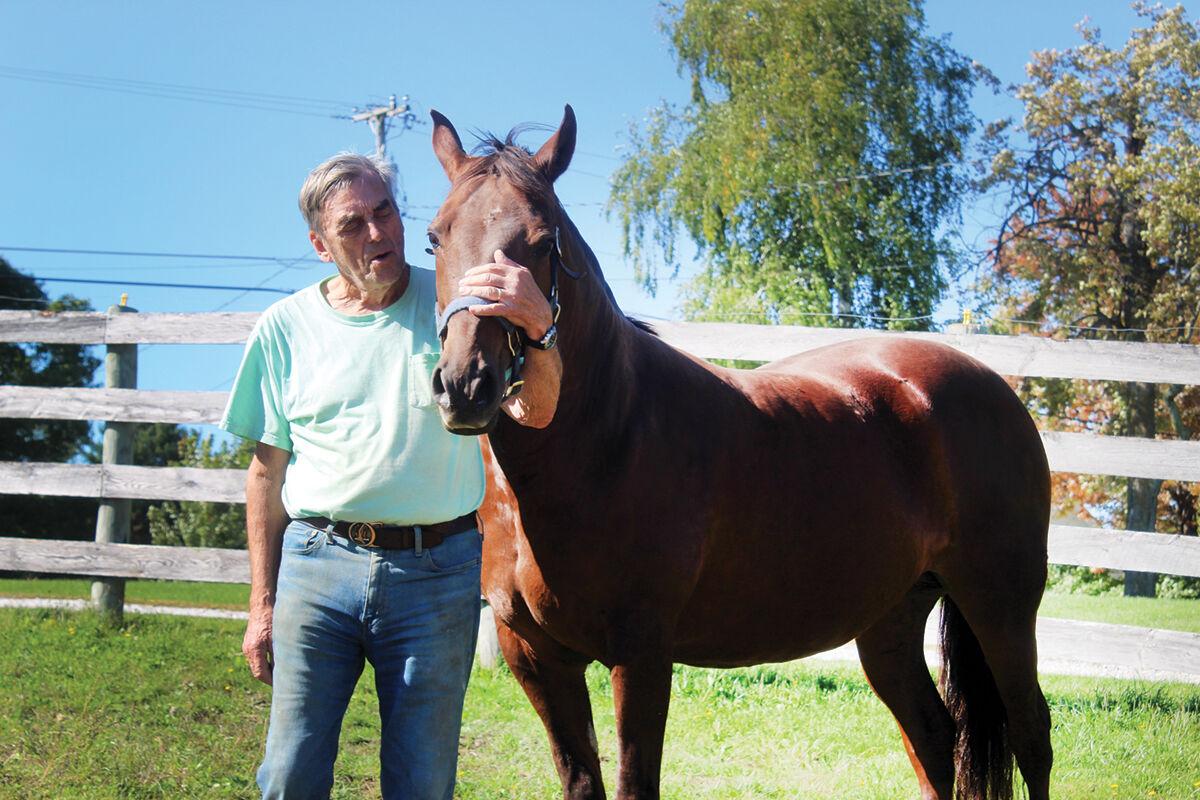 Jerry Nau stands with Cinny, whose registered name is Red Kill Cinnamon Beauty, one of the four horses stabled at Meadowsong Morgans these days. 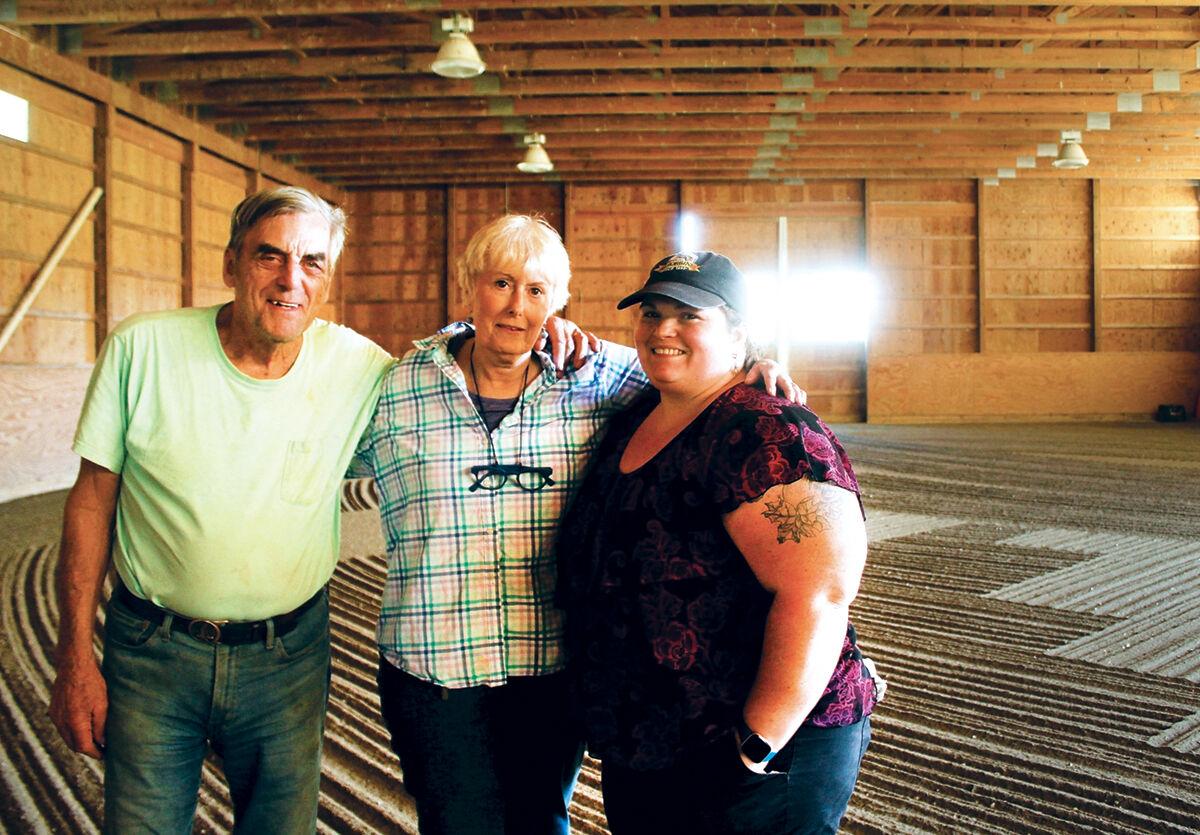 Jerry Nau stands with Cinny, whose registered name is Red Kill Cinnamon Beauty, one of the four horses stabled at Meadowsong Morgans these days.

Jerry Nau has been riding horses since he was 5 years old. He’s 83 now.

And, in that almost 80 years, he’s never been thrown off a horse, he said.

“I think you slithered off once to avoid being thrown,” his wife Mary Jane Nau was quick to say.

Jerry is now retiring from raising and training horses — or retiring as much as he can with four horses at the Nau’s Meadowsong Morgans horse farm on Spear Street in Shelburne next to the golf club.

Born in 1938, Jerry said he grew up during World War II when they had nothing. During those years his family used government scrip to buy food.

“Those were poor, lean years,” Jerry said, sitting in the tack room of his horse barn.

That aphorism proved true at the Naus’ farm. Although their tack room was cluttered, the talk was warm, open and free flowing.

Outside the tack room the barn was just the opposite. The stalls were immaculate and the riding area was raked in precise geometric patterns with as much care as a Zen garden.

Jerry was born in Connecticut and grew up in Brewster, N.Y. Mary Jane grew up in Pelham, N.Y. Both their families owned farms in Vermont where they spent their summers riding and training horses — Jerry in Fairlee and Mary Jane in Waitsfield.

Although it was decades before they would meet — she was 32 and he was 40 and recently divorced with three children — they also shared a very similar and unique philosophy about breaking horses.

Jerry said he broke horses completely differently than the way horses are broken out West. He came to the conclusion growing up that riding a bucking horse to break it was dangerous for both the human and the horse.

“There’s an easier way and you don’t break their spirit,” Jerry said.

A small sampling of some of the awards Jerry and Mary Jane Naus and Meadowsong Morgans have won over the years:

It might take two or three weeks but both he and the horse became so familiar with one another that riding was a smooth transition.

No one taught him this technique. He just figured it out. In the process, he rediscovered an old way to get a horse into a riding frame of mind.

“Other people have done this over the years,” Jerry said.

Mary Jane said she had figured out the same way of breaking ponies her family would rent during their summers in Waitsfield.

When they met, they also found they shared a passion for Morgans.

But, Mary Jane said, their passion for horses wasn’t what ignited their relationship. “I have a funny feeling it was hormonal.”

The Morgan horse may be the Vermont state animal, but it is particularly revered in Shelburne.

The Morgan horse museum was located on Bostwick Road and then moved to Shelburne Commons on Shelburne Road, before it moved to Kentucky, the Naus said.

A move that’s sort of a burr under their saddle.

The Morgan horse has been popular in Shelburne because it was a beautiful town where many people had money, Mary Jane said. “They could afford to buy a pretty horse.”

The Naus lived on a farm in Brewster, N.Y., for many years, but both wanted to move back to the state where they’d summered as kids.

They bought a farm in Randolph, which seemed like a perfect fit for a couple of Morgan horse lovers.

Justin Morgan, who owned Figure, the original Morgan horse, was a teacher, composer, town clerk and horse breeder in Randolph, where he originated the breed in the late 1700s and early 1800s.

Although Figure was a small horse, he was strong and fast. The horses he sired became known for winning races, pulling stumps and a friendly disposition.

The Naus lived in Randolph for six years. They hated it.

“It was six too many,” Mary Jane said. “I think only two people were really friendly there.”

They began to look for a farm to buy in the Shelburne area because of summer memories of northern Vermont and because Bonnie Sogoloff, who trained horses for the Naus, lived nearby on Philo Road in Charlotte at Cedar Spring Farm, the farm the Sogoloffs built in 2006 and sold this year.

A real estate agent who was showing the Naus properties said she had a house they weren’t going to like.

When they got to the house, Mary Jane walked straight to the backyard to check out the view. “I said, ‘There’s Camel’s Hump. End of story.’”

She remembered the view of Camel’s Hump from her childhood summers in Waitsfield.

Meanwhile, Jerry took two steps in the front door and stopped. The real estate agent kept walking until she realized he had stopped. She asked why.

He told the agent it didn’t matter what the selling price was, and he would pay cash. He bought it for $500,000, even though the agent was sure he could get it for less.

At the closing, after he paid for their new home, the owner came up to Jerry and said, “‘You have no idea what you’ve done.’ And I said, ‘I’ve just bought your house.’ ‘No,’ she says, ‘You just saved me. My husband is dying. He’s only got two or three more months to live. We have no money.’”

When Jerry was building the barn in 2008, Shelburne highway superintendent Paul Goodrich asked for some topsoil from the construction site for Shelburne’s gardens. Nau gave him several loads of topsoil, enough for all the town’s flowers and strawberries.

Jerry said he could have sold the topsoil for over $40,000, but he did ask Goodrich for a favor in return — Goodrich loaned him two town earth movers for two days.

Goodrich had the operators widen the shoulder on Spear Street for bike lanes in that area.

The Naus used to have 13 horses at Meadowsong Morgans. They’re down to four and Jerry says he’s really, really retired.

But next year he would like to take his Morgan, Teddy, to some “grandfather shows.”

The official name of these events is centennial shows, where the age of the horse plus its rider must equal 100 or more years. Teddy is 20. They won’t have any trouble qualifying.

And it’s unlikely Jerry will get bucked off.