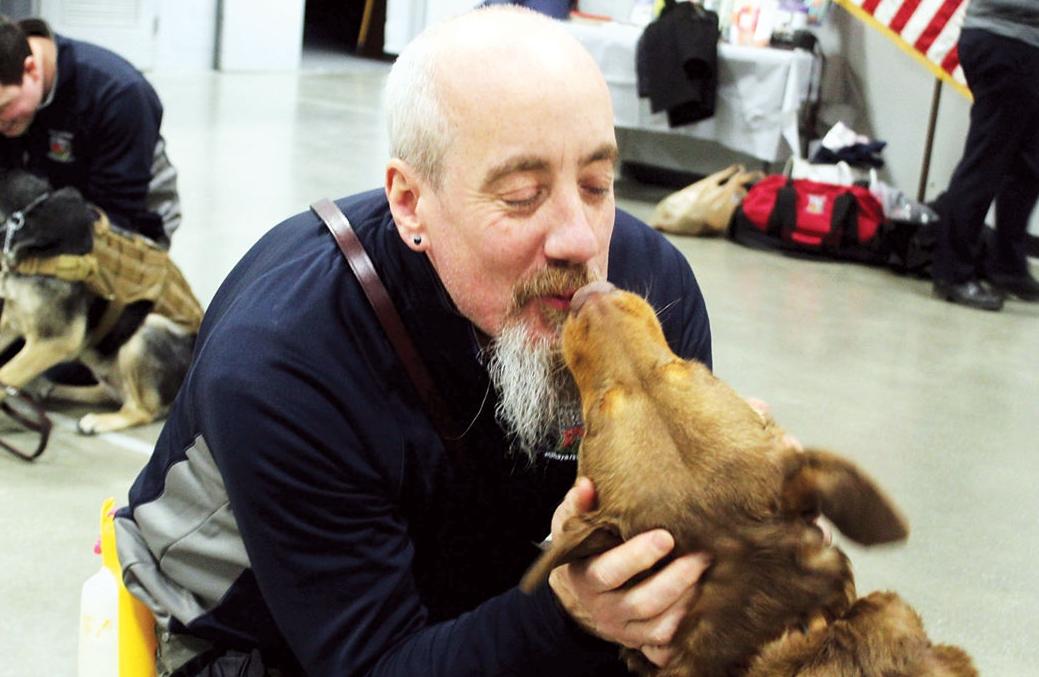 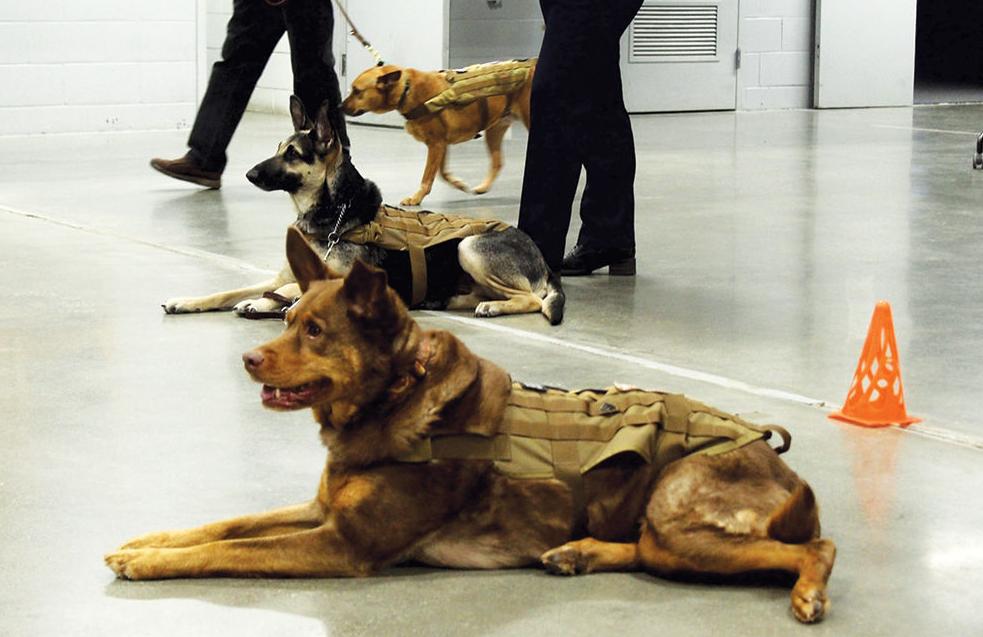 Service dogs at a Vermont Paws & Boots demonstrate staying still in the midst of confusion. 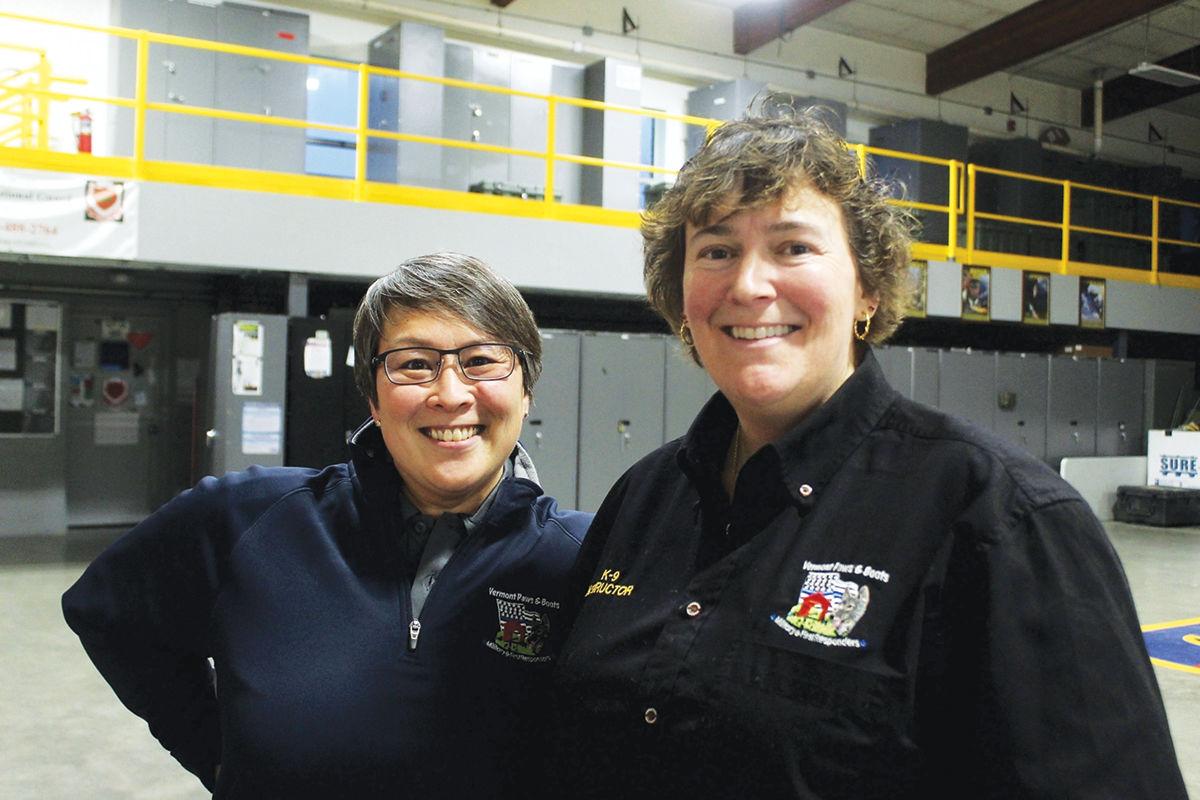 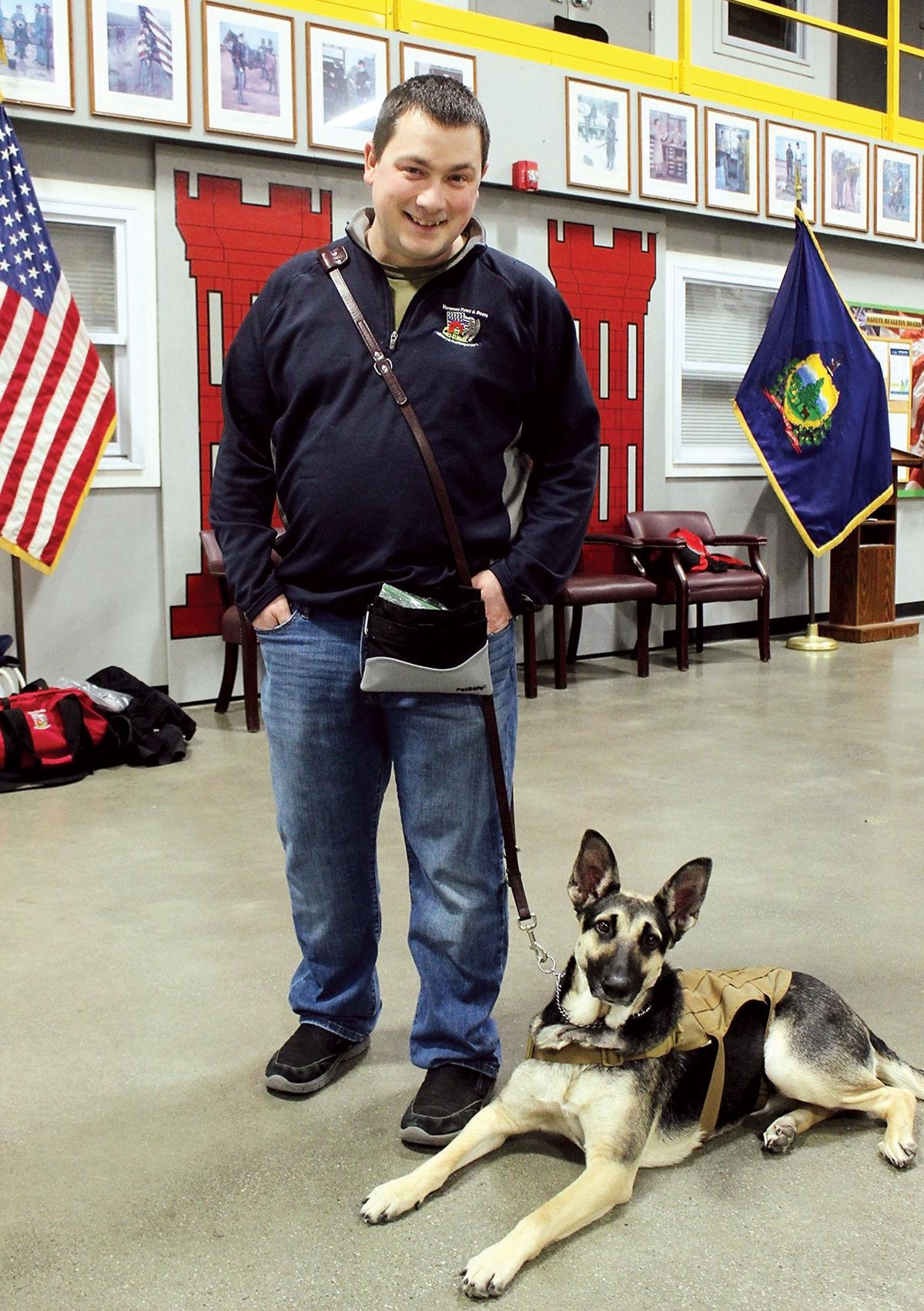 Steve Shine says that Luna helps him physically – getting up and down stairs for instance – and mentally, helping him deal with the effects of post-traumatic stress disorder.

Service dogs at a Vermont Paws & Boots demonstrate staying still in the midst of confusion.

Steve Shine says that Luna helps him physically – getting up and down stairs for instance – and mentally, helping him deal with the effects of post-traumatic stress disorder.

Harley Soulia is working at home when he notices Arthur staring at him. Arthur is a black poodle and Soulia realizes from his dog’s expression that something must be going on.

Soulia walks into the front of his house and there’s someone at the door. He would never have known this.

He is deaf. Arthur is his ears for much of the time.

Soulia has been out of the Navy since 1959 and has wrestled with hearing issues for years since. He’s had two cochlear implants.

“It’s gotten to the point where the VA can’t make a hearing aid for him,” said his wife Muriel by phone from Florida where they’ve gone for the winter.

Arthur and Soulia are students of Vermont Paws & Boots, a nonprofit service dog training program for military and first responders.

Michelle LeBlanc, founder of Vermont Paws & Boots, says it is the only nonprofit service dog training program for military and first responders in Vermont. It’s the only such organization she’s found in the United States, and it’s based in Chittenden County.

LeBlanc served in the Army for five years and retired from the Vermont State Police after 22 years. For 11 of those years she was a canine officer with Casko, a Czechoslovakian shepherd and Belgian Malinois mix.

In 2015, Casko retired after injuring a disk tracking an armed robber. He passed away in 2016.

He and LeBlanc were the longest serving canine law enforcement team in Vermont.

They were also the busiest. LeBlanc said, “We were the most active team in the state of Vermont, too. We had usually over 120-125 calls a year where some teams have 20 calls a year.”

In 2019, Casko and LeBlanc were the very first team inducted into the National K-9 Hall of Fame in Porterdale, Ga.

Scott Williams is a veteran who’s been dealing with trauma since 1989 from his time in the Navy, serving in South and Central America when Nicaragua and El Salvador were embroiled in conflict.

“I had experienced several traumatic situations where people were injured and killed,” Williams said.

This was in the days before post-traumatic stress disorder was a widely known diagnosis, but in 2010 he was diagnosed with PTSD.

He’d had counseling and was doing fine. He went to law school and was working for the state of Vermont as a prosecutor, but in 2015 he was one of the first people on the scene after the shooting death of Lara Sobel, a social worker with the Vermont Department of Children and Families.

According to news reports, Jody Herring shot Sobel in the parking lot of a government building in Barre because she was upset about decisions made in the custody case of her 9-year-old daughter. Later, authorities discovered Herring had already shot and killed three of her family members.

Williams was hit hard by the shooting. He’d worked with Sobel and Herring, he said.

Williams said that his PTSD came back with a vengeance. “I had resigned my position. At that point I couldn’t work at all. I was in intensive therapy and treatment.”

He said that during this time he was “watching TV, reading lots of books and trying not to drink. Alcohol doesn’t help, but it helps, if you know what I mean.”

Williams said: “When I met Michelle, it was a lifeline. She’s a highly emotive person, and she’s a really take-charge person. She knew I didn’t need hugs and kisses.”

“I wasn’t allowed to look at him or pay any attention to him,” said Williams. “He came down and basically tried to climb into my lap.”

Williams said he was overwhelmed, but he didn’t know if he could take care of a dog.

Michelle told him, “I’ll come to your house every day. We’ll do whatever it takes to get over this anxiety.”

Luca was less than a year old when he joined Williams as a service dog. “He was a rock star from the beginning.”

Now, Williams manages a large maple sugaring operation with 10 employees in the middle of 3,500 acres in Marshfield. He grocery shops. He goes to restaurants.

“This PTSD thing – it’s tricky. I can be feeling like things are really good and they’re not,” Williams said. Luca will know, though “and he’ll start signaling.”

He’s a big dog and will stand on his hind legs with his paws on Williams shoulders. “It looks like I’m being hugged by a bear. When that happens, we know I’m in a bad spot.”

Avoidance is one of the things that comes with the PTSD, but Luca won’t quit if he wants Williams to lie down. He keeps “pushing” until Williams withdraws from stressors and begins to practice mindfulness, noticing what his body is doing and focusing on his breathing.

“There are a group of us whose lives have been profoundly changed by Michelle. She’s a force of will and commitment,” said Williams.

“Right now, our mission is to assist veterans and first responders to be able to get back out into the community,” said LeBlanc. “Twenty-two veterans a day commit suicide.”

Steve Shine was at the Williston Armory for LeBlanc’s service dog training with Luna. He spent 12 years in the Vermont National Guard with tours in Iraq and Afghanistan.

Shine said he has sciatic pain in his leg and some days he needs Luna for help getting up and down stairs. Although he initially came for the physical help, he realized he needed Luna to help with the effects of PTSD as well.

He has four children and one of the big breakthroughs, after working with Luna for four months, was: “I feel like I can actually go to my kids’ functions now because that was a huge anxiety for me.”

Earlier in the day before the class, Shine had been at Costco with Luna and he said, “You know, it’s just swamped with people. I felt very comfortable and wasn’t getting frustrated or anything like that.”

LeBlanc said that she shares with the first responders and veterans the memories she’d rather leave behind, the things that experiences forced them to see every day. “You can never unsee what you’ve seen.”

“We can’t control when these memories come in and out of our head. And when it happens, it’s up to the dog to alert on that,” said LeBlanc. She said it may be the smell that triggers the dog’s awareness that their human partner needs help.

LeBlanc’s program is available to veterans from around the state, but the training is rigorous. It’s not just classes for dogs. The handlers have to take tests and write three essays. When LeBlanc texts them, they have to respond right away. Some don’t make it through the program.

She also has plans to buy 10 acres near Bennington and build a kennel facility where veterans and first responders can stay overnight and work with their dogs. “I want it to be peaceful. You know, I want to have a place for the dogs to play in the water. I want to have hiking trails.”

If you would like to get in touch with Vermont Paws & Boots, their email address is VermontPaws257@gmail.com and their website is vermontpawsandboots.org