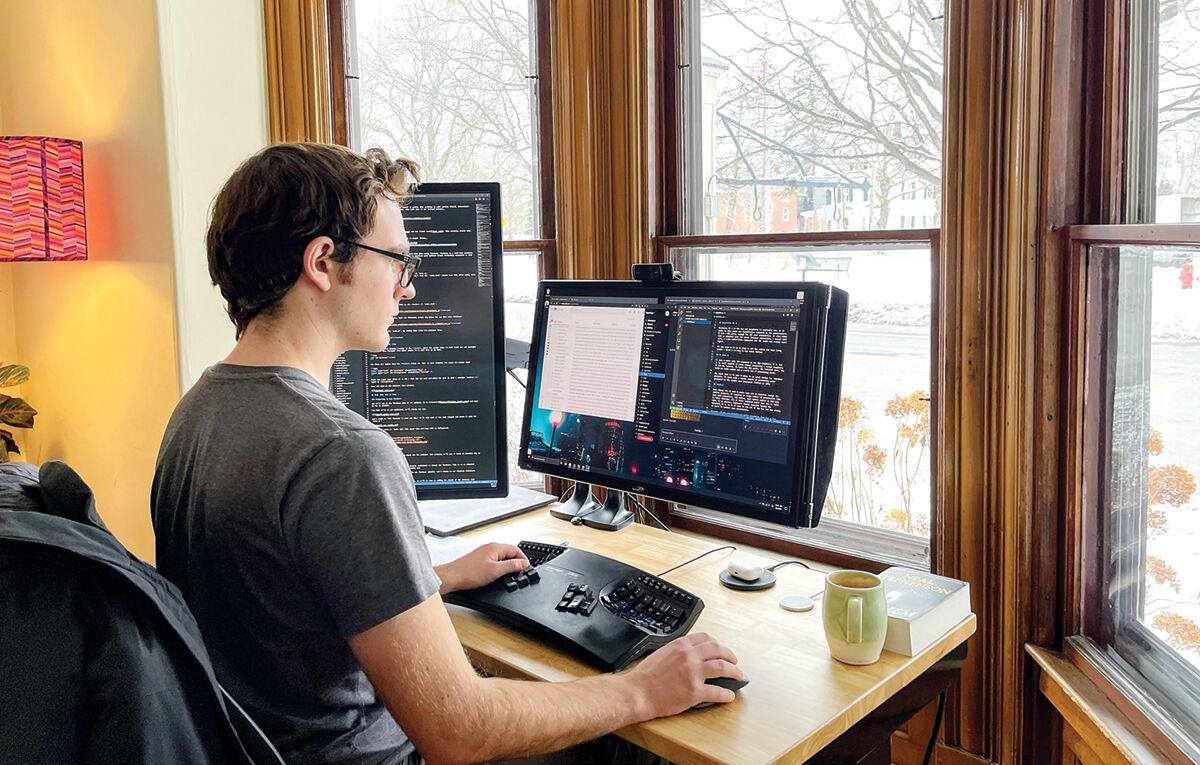 Zach Latta, the founder of Hack Club, at his desk in Hack Club offices in the building that formerly housed The Pump House in Shelburne. 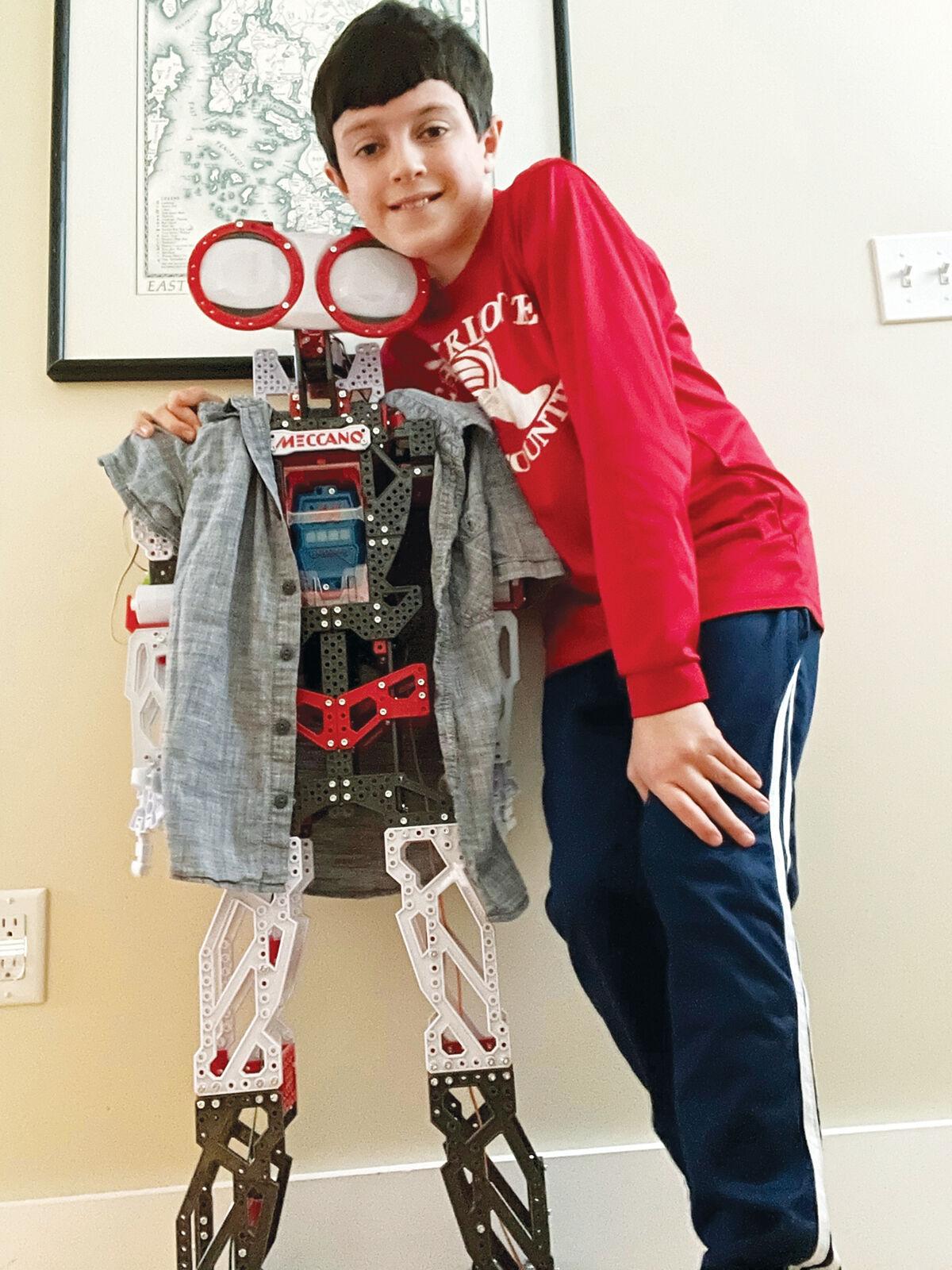 One of Reed Herlihy’s goals is to learn coding so he can program his robot. 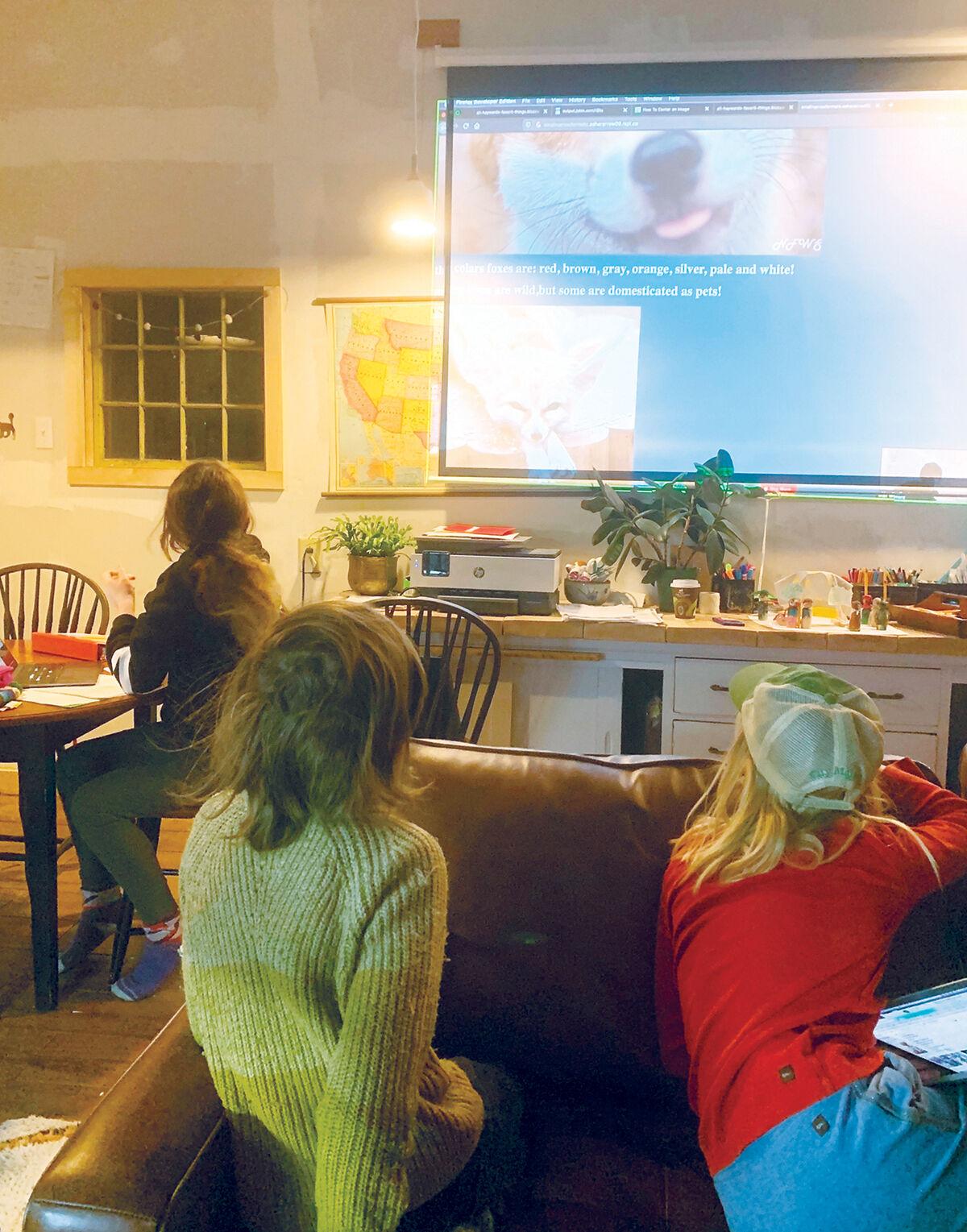 Zach Latta, the founder of Hack Club, at his desk in Hack Club offices in the building that formerly housed The Pump House in Shelburne.

One of Reed Herlihy’s goals is to learn coding so he can program his robot.

At 7, Zach Latta took apart his parents’ computer and put it back together.

At 12, Latta was part of team that developed an online video game with 10,000 users.

At 15, he designed the No. 1 app on the App Store, gaining more than a million downloads.

Nothing special he said.

Also at 15, he tested out of high school, and with his parents’ reluctant blessing moved from his home in Los Angeles to San Francisco — alone — to learn more about computer coding.

Within 24 hours he had a job, with a higher salary than both of his parents together.

Still, he said, it’s nothing special.

Now, he’s on a mission to teach students ages 12-18 coding, how to do the kinds of things he did with computers at their age.

He founded Hack Club in San Francisco in 2014. The nonprofit works to start hacking clubs for young people around the world.

“Learning coding shouldn’t be left to chance. It’s something that every teenager should have the opportunity to do, just like joining the school band or the football team. It should be a commonly accepted thing to do,” Latta said.

In March, he moved Hack Club from San Francisco to Shelburne, planting his own roots in Charlotte.

Hack Club’s chief operating officer is Christina Asquith, of Charlotte. Until its arrival locally she had been working remotely. Latta said when the pandemic hit, the two began to talk about finding a better — and less expensive — home base.

In the Green Mountains, Latta found a place friendly to creative minds: “Vermont is a place that really embraces risk takers and countercultural people.”

Latta said, six years after Hack Club was founded, it now has 10,000 students around the world — in 500 schools, almost all 50 states and 22 countries.

“It’s really starting to take off in Africa and India, in particular in Zambia,” he said.

He listed Singapore, Russia, Europe and rural areas of the United States as examples of the far-flung, diverse places welcoming Hack Clubs.

Like many of the young minds he helps mold today, Latta felt lonely when he was young.

“My high school didn’t teach coding, I didn’t have any friends that shared my interest,” he said.

Upon moving to San Francisco, with $10,000 in savings from a coding competition win, he lived with 12 others in a home and found the group he longed for. He was by far the youngest person, at 15, among the 19- to 27-year-old crew, but he shared in the groups’ passion for coding. That was the equalizer among them, regardless of socioeconomics or birthplace.

“It really felt like the first time I had found my tribe, because for the first time in my life I found other people who shared this love I’d had since I was a kid,” he said.

“It’s something that every teenager should have the opportunity to do, just like joining the school band or the football team.”

The first Hack Club in Vermont, Charlotte’s, formed in the fall. Until quarantine is no longer a factor, its six members meet remotely or at a member’s home.

Reed Herlihy, a fifth grader at Charlotte Central School and club member, has designed roughly 10 websites since he joined. Herlihy said building websites is fun because it’s like putting together a puzzle where you get to make the pieces.

Herlihy has learned how to use at least two coding languages, hypertext markup language, or HTML, and Cascade Styling Sheets, CSS, and is learning a third (Python).

His goal is to be able to program the robot he got for Christmas a couple of years ago and the robotic arm he got this holiday.

After he’s finished working on a website for his friends and programming his robotic arm, Reed said he wants to build a motherboard.

Asquith’s daughter, Amelie Fairweather, a Charlotte Central School sixth grader, decided to capitalize on the skills she’d learned from Hack Club by advertising on Front Porch Forum, saying she would design websites for $100.

One of the websites she designed was for Spruce Peak, sprucepeak.com. Fairweather is planning a website to sell her own art, too.

Hacking can provoke a pejorative reaction in a climate rich with election tampering accusations and cyberattacks, even locally at the University of Vermont Medical Center last year.

Latta, though, uses the word in its original sense.

“A hack is really a non-traditional solution to a problem. That’s all the word means,” Latta said.

He said the word “hack” was originally used by computer enthusiasts at the Massachusetts Institute of Technology in the 1960s. They called themselves hackers and created some of the foundational technology computers use today.

“They were trying to make these massive mainframe machines that were built for business applications do things for human beings that they weren’t designed to do, do things that make art,” Latta said. “We think coding is the closest thing we have today to a superpower.”

Latta said he wants to use Hack Club to teach a generation of young people skills, how to network, and to have the mindset so they can be users, not just consumers, of technology.

“For the next 50 years, we’re going to have to face some of the hardest challenges humanity has ever had to overcome,” he said.

Through Hack Club Latta said he hopes to help create a generation “who not only understand technology but are also thinking about ways to use it in unconventional ways, to become the future leaders of our towns, of our cities, of our states and of our country.”

These are student-led groups; every Hack Club is led by a team of two to three high school students in a mentorship role. Each time they meet, they build something. Everyone leaves their first meeting with their first website built and on the internet.

Over the course of a year, students build thousands of projects, he said. Members help each other with their projects within their own club or from around the world, trading more than 3 million messages each year.

“Most students who join a club have never coded before,” Latta said.

And everything in Hack Club is free — free to students, free to schools and free to parents, he said.

“Hiring a computer science teacher for every school would be very expensive for our state,” Asquith said. She believes Hack Club is a way for Vermont to lead in developing young coders.

During its first two years, Latta kept Hack Club relatively small, with a few clubs in and around San Francisco. In January of 2016, Hack Club opened to the public with 16 clubs. Since then, the nonprofit has grown by leaps and bounds.

Everything is donor-supported, including by big names like Elon Musk, founder of Tesla and SpaceX, the first privately owned company to send a spacecraft to the International Space Station.

Another who gravitated to Latta’s vision was Ryan Caldbeck, founder and executive chair of CircleUp, which he described as an investment company powered by technology.

About a year and half ago, Caldbeck was searching for an educational nonprofit startup with which to connect.

“I was looking for something that would have an impact across the country with large numbers of students with computer science and technical skills that can particularly help students in rural areas,” Caldbeck said. “I came up with Zach and was blown away. He’s built something really special. I became an advisor to Hack Club.”

Latta described Hack Club to him as a Scouts of America for the next generation.

Caldbeck was also impressed that a club could be located in Shelburne. Turns out, he’s from there. “When I grew up in Shelburne there was so much talent around me,” Caldbeck said. But so many of the students he knew in school didn’t have access to higher education or computers.

He appreciated that Hack Club could flourish in communities that were rural or urban, wealthy or not.

It’s the sort of thing that democratizes education, he said.