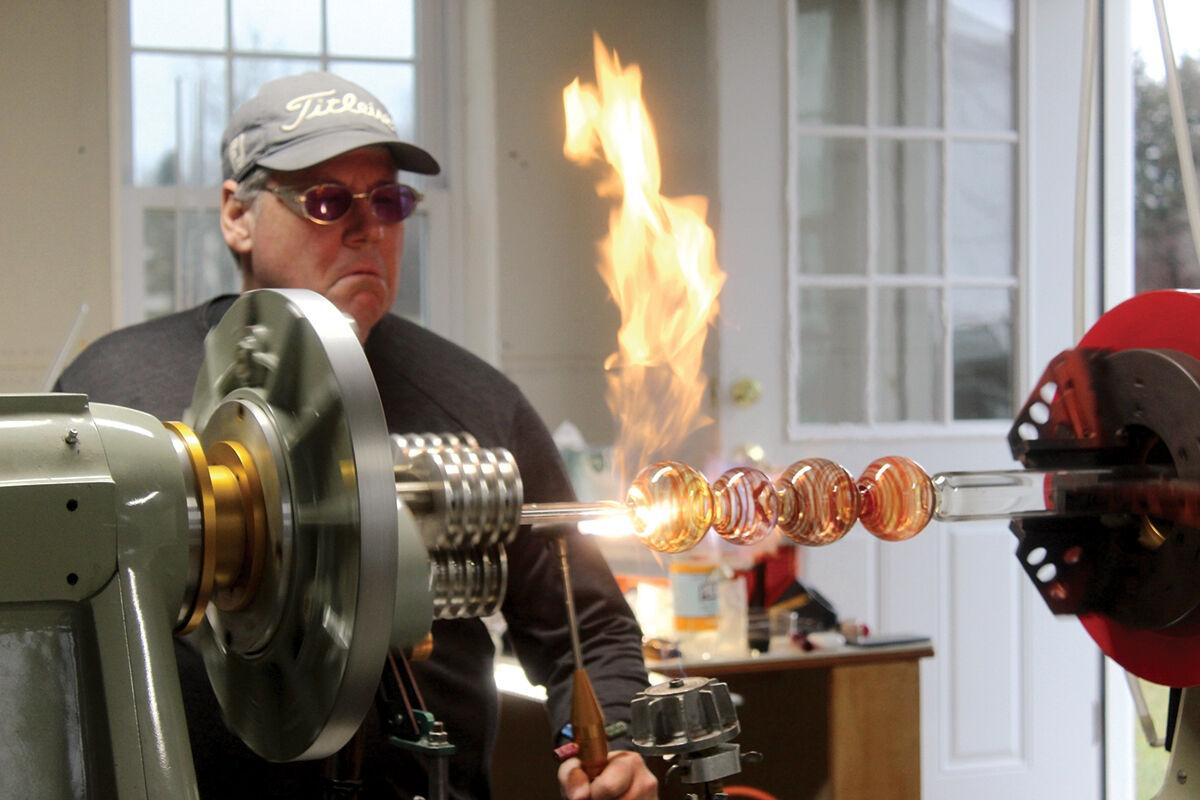 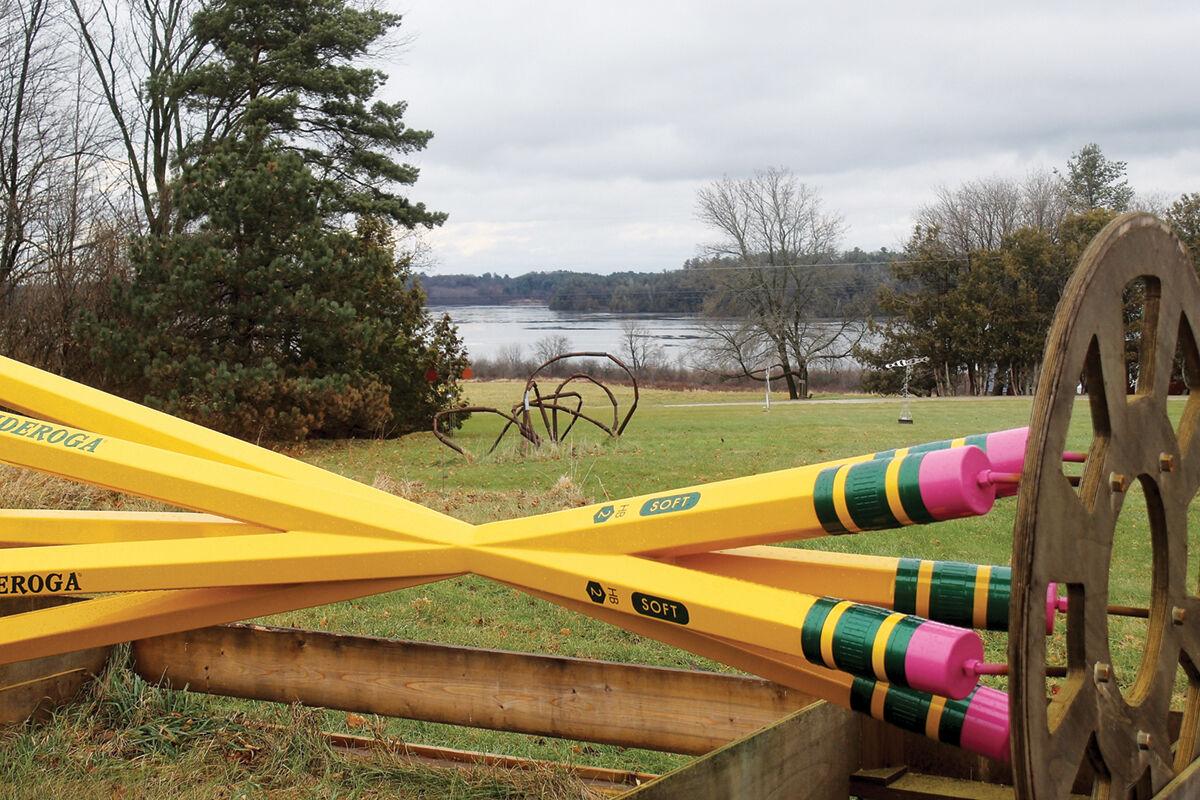 These larger than life-size pencils are the work of Chris Sharp. Another of his creations is the gigantic jack made of red fire hydrants on Shelburne Road across the street from the Shelburne Fire Station. 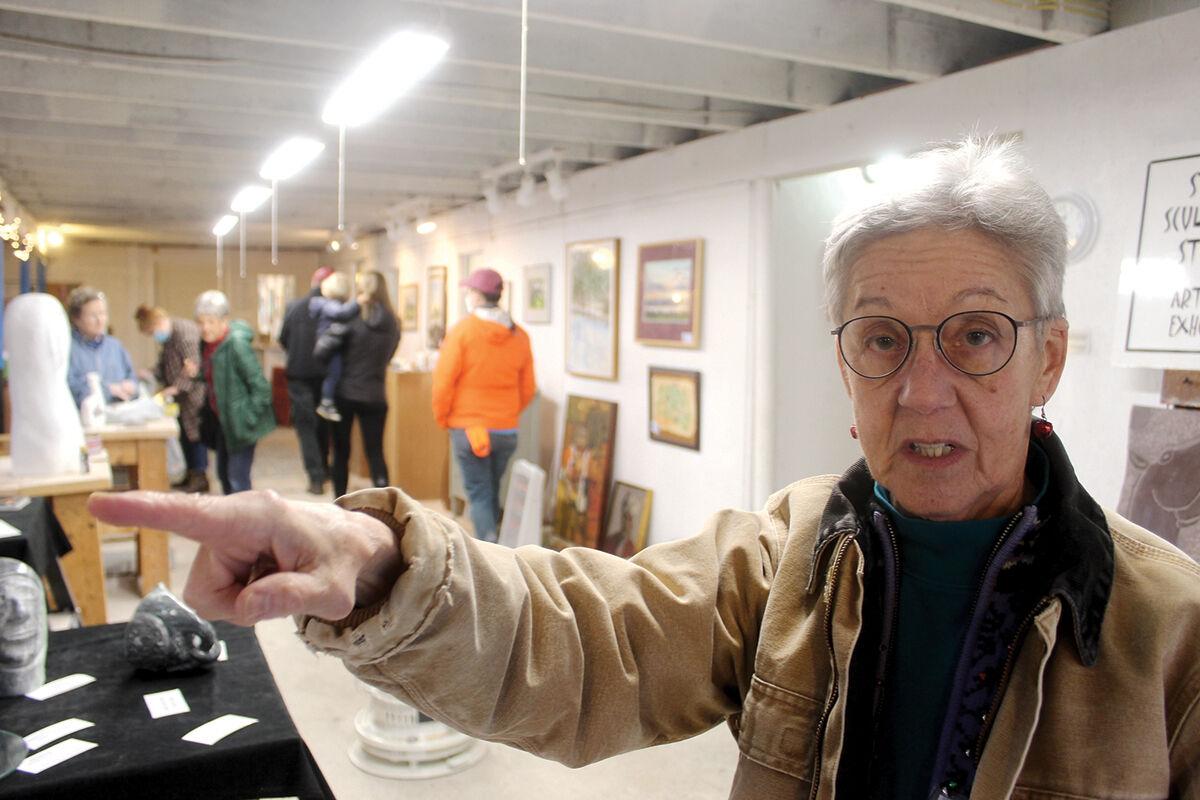 These larger than life-size pencils are the work of Chris Sharp. Another of his creations is the gigantic jack made of red fire hydrants on Shelburne Road across the street from the Shelburne Fire Station.

Katharine Stockman teaches stone carving to people of all ages.

And not just the softer and easier to carve soapstone. She’s taught kids to carve limestone, alabaster and “a neighborhood kid was working in marble last year.”

But stone carving is far from the only art at her Shelburne Pond Studios. There are artists who paint, work with fiber and glass, make furniture, repurpose found objects, make music and video, and write plays.

Stockman and husband Rad Romeyn founded the studios in 2010, converting a former dairy barn into 13 studios with 15 artists currently.

None of the 15 is Romeyn, who said he’s not an artist, just the maintenance man.

Stockman and Romeyn moved to the former farm in 2005. The dairy barn no longer had cows, just “an old tractor and 10,000 bales of hay,” Stockman said. “So, studio by studio, one by one by one, we started finishing them off using mostly recycled materials.”

The easiest way to find Shelburne Pond Studios is to look for the sculptures. On the south side of the road there’s a grassy hill where an assortment of sculptures has replaced the cows but which still nibble at passersby’s aesthetic sensibilities. For the GPS-oriented, the address is 1260 Pond Road.

One of the sculptures of note for Shelburne residents is a large cairn constructed of burned timbers from the Old Dairy Barn at Shelburne Farms, an iconic and treasured barn built in 1891 that burned down five years ago after apparently being struck by lightning.

At the time, Shelburne Farms President Alec Webb, said, “The Old Dairy Barn was an important presence, a quiet partner in our programs. Its loss reminds us of how important our historic barns are to the fabric of this place and the whole community.”

A stack of huge yellow “pencils” close to the studios is also prominently connected to Shelburne. The creation of Chris Sharp, whose giant red jack constructed of fire hydrants stands on the east side of Shelburne Road across the street from the fire station — an appropriate place since the sculpture is a tribute to firefighters and their sacrifices after the 9/11 terrorist attacks.

Several years ago, metal sculptor Bruce Hathaway who works from his studio in Richmond asked if their field could be used for exhibiting outdoor sculpture.

“He said there’s no place in Vermont currently that has year-round outdoor sculpture exhibited. When I bring my sculptures back from an exhibit or a show, they just go into my garage,” Stockman said. “I’d like to be able to have them where people can see them.”

Stockman and Romeyn thought it was a great idea.

She began contacting other sculptors and now they have metal, wood and stone sculptures from a variety of artists in what is essentially their front yard, a number of which they’ve sold for a minimal commission.

The stone Stockman carves comes from around the world including Canada, India and Brazil and most of it comes from her supplier in New York City, who will walk around his inventory and try to find stone that fits her needs.

In one of the miracles of modern technology, he shows her stone on his cell phone and when she gives the OK, it’s shipped out by mail.

One thing that hasn’t changed is someone still has to deliver the raw stone.

After 23 years of stone carving, she is still fascinated with discovering what the stone will reveal.

The studios sit on a knoll with 360-degree views of Shelburne Pond, Mount Mansfield, Camel’s Hump sunrises and Adirondacks sunsets, with the Green Mountains and Hinesburg to the south.

Landcape painter Annette Hansen believes she’s got the best windows in the studio. Although she often works from sketches, she can also just look out her window and paint the landscape she sees standing at her easel.

Stockman keeps the rents low so they can provide emerging artists with a space in a supportive community of other local artists.

The studio is open to the artists 24/7, but people who are interested in the work of an artist would do best to set up an appointment first.

The most popular way to see the artists’ work is to attend one of two open houses each year. The next will likely be around Memorial Day. Stockman tries to schedule them at the best time for the greatest number of Pond Road Studio artists.

“We have a lot of gratitude and appreciation that we’re able to do this and people want to come here,” Stockman said. “It’s just a beautiful place, so we’re pretty blessed by all of this.”