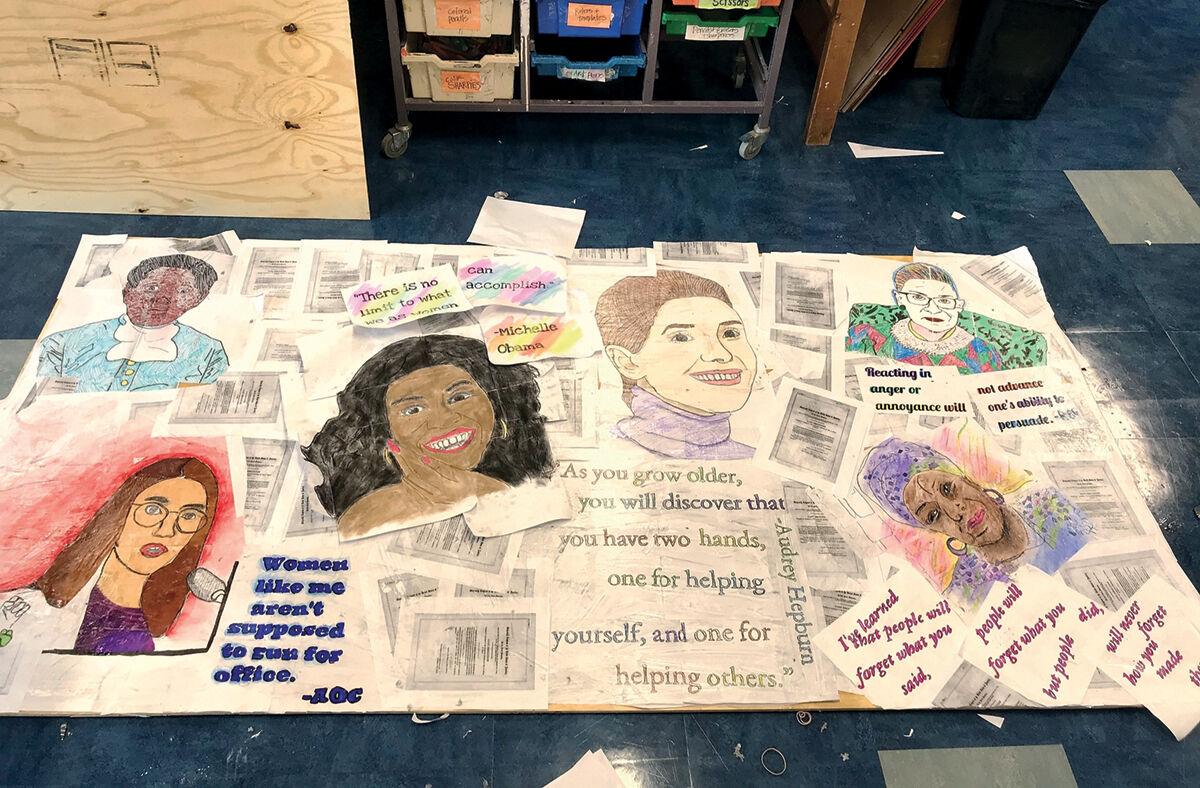 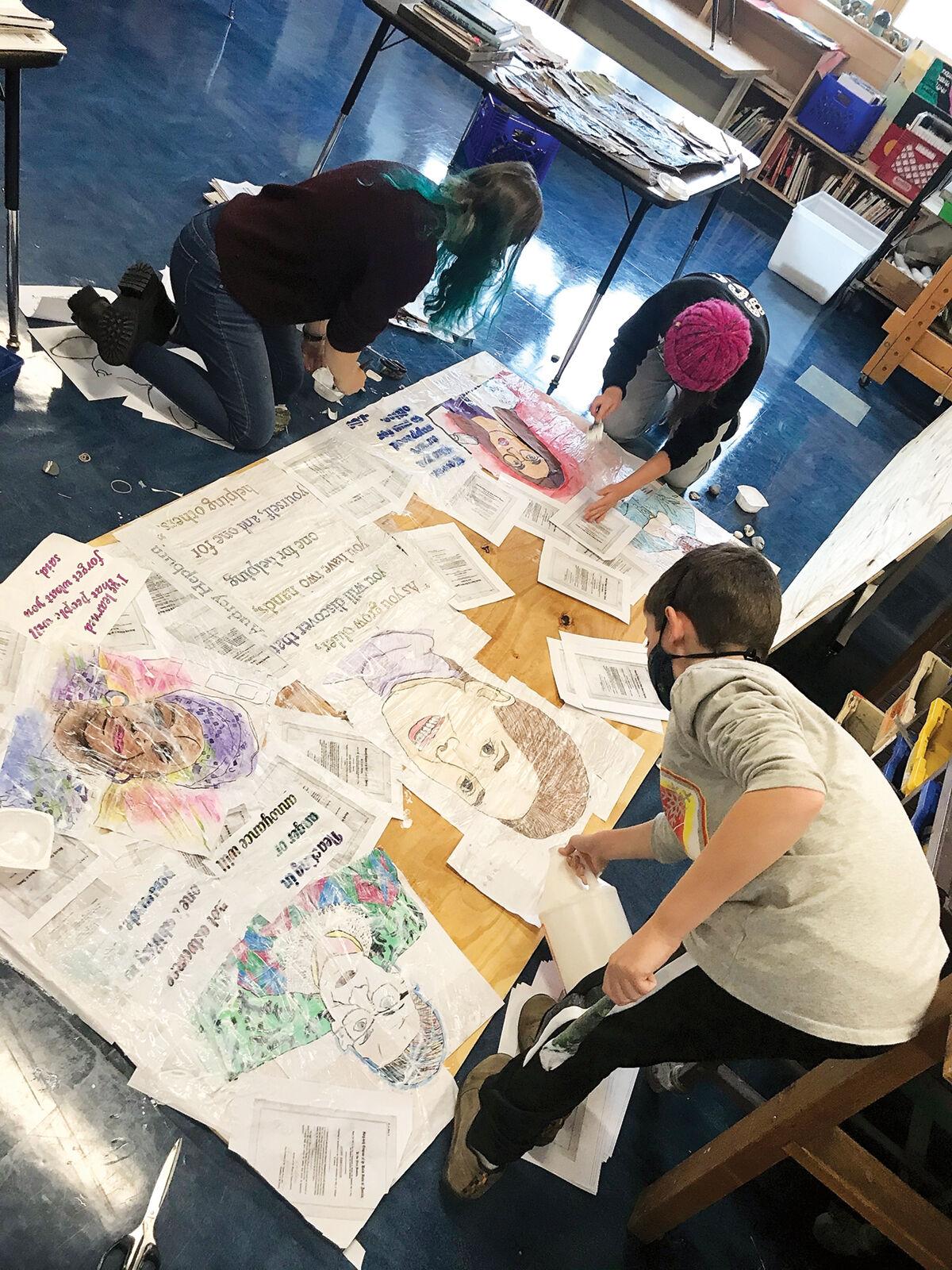 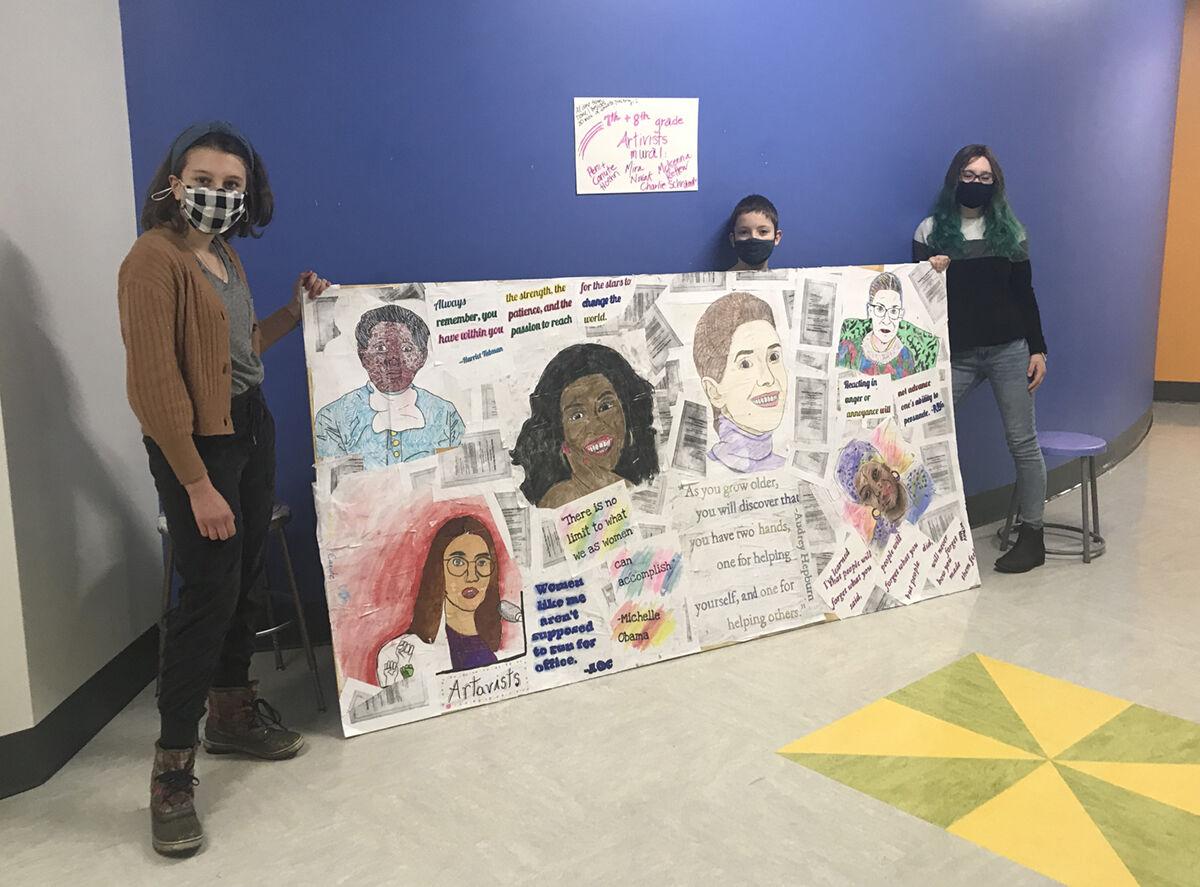 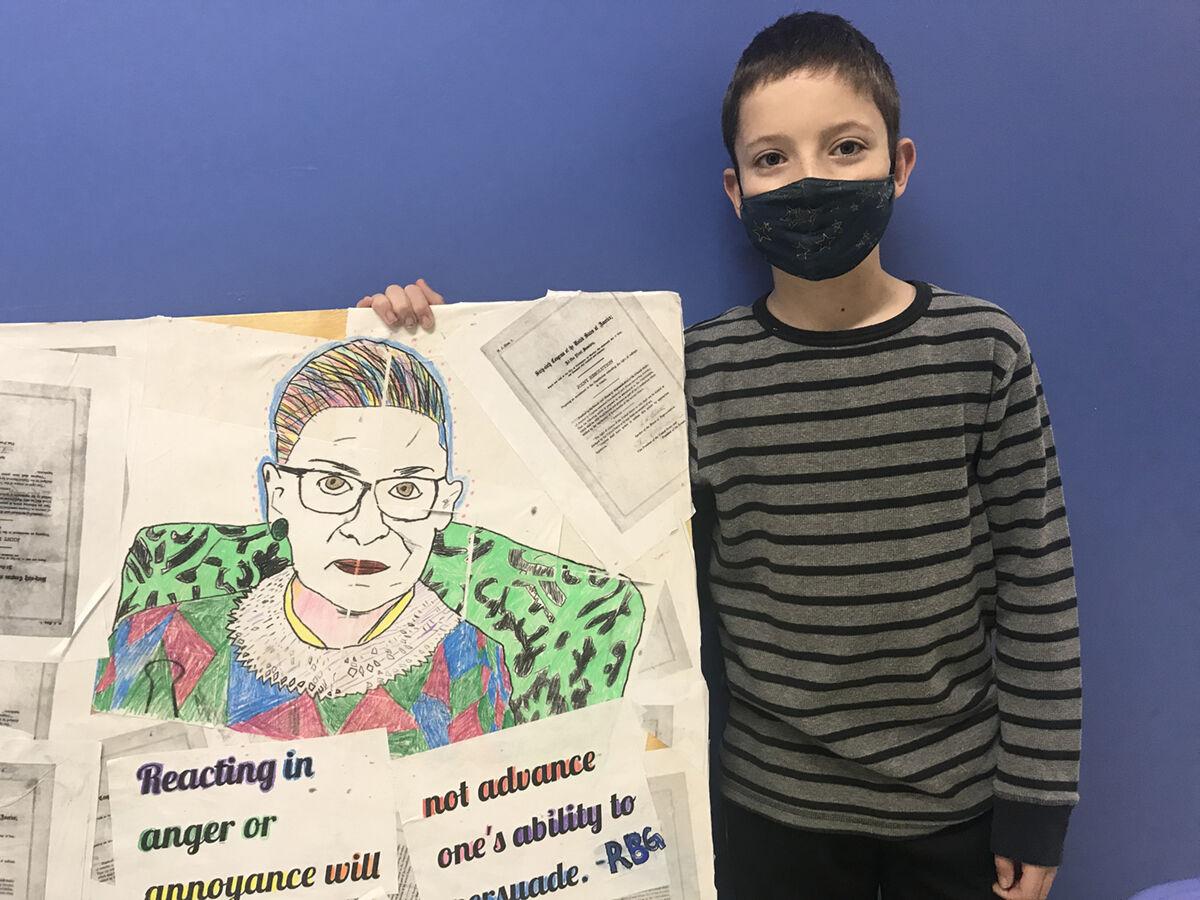 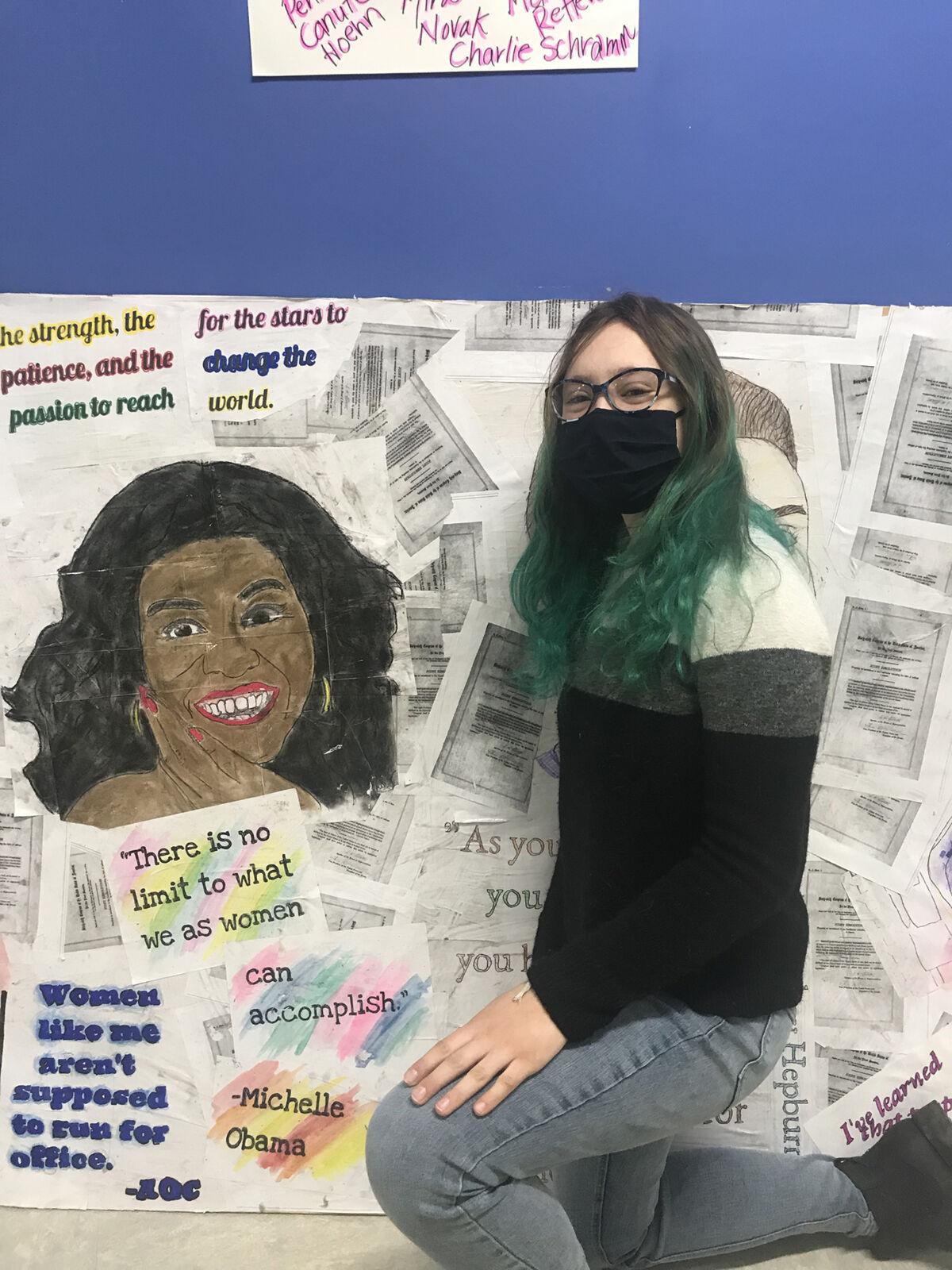 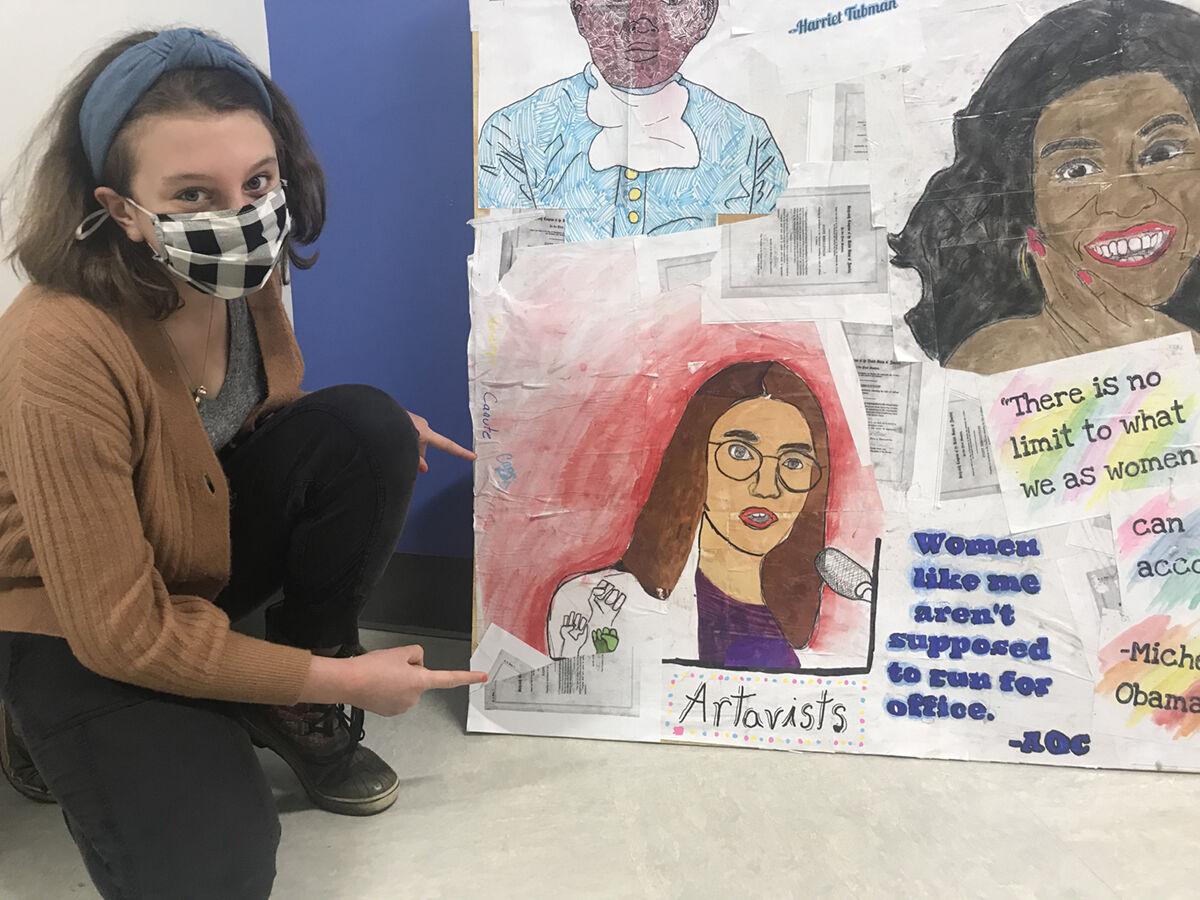 They call themselves “artivists.” They are artists. They are activists.

And they are middle schoolers.

Seventh graders Pen Hoehn, Canute Hoehn, McKenna Rettew and Charlie Schramm, and eighth grader Mira Novak, all students at the Shelburne Community School, didn’t have to be in an elective art class on Wednesdays.

They chose to take the school’s inaugural protest art course, under the guidance of teacher Carin Lilly, because they were interested in it.

As Lilly put it, they could have all been snuggling with their dogs instead. But there was work to do, so snuggling had to wait.

They are now in the final stages of creating their own powerful art piece in hopes of inspiring others to engage with the world around them.

Activism and art have long been friends. From Dadaists to Frida Kahlo, Banksy to the Black Lives Matter movement, visual representation of societal shortcomings have affected change and kept eyes on the issues.

For the group of young artists at Shelburne Community School, it was time to showcase some incredible subjects who helped set the stage for their own successes.

The students created a 4-by-8-foot mural, each depicting a woman who made an impact. Choices for the project spanned from gay rights to climate change before the group decided to focus on women’s rights as its issue du jour.

Pen Hoehn chose to contribute a portrait of Audrey Hepburn. Not the young starlet known for her work in “Breakfast at Tiffany’s” or “Funny Face,” but the more mature version who dedicated herself to humanitarian efforts like UNICEF.

Lilly, who couldn’t let the project go on without jumping in, too, was inspired by “I Know Why the Caged Bird Sings” when she was roughly her students’ age, chose to recreate Maya Angelou, who she said helped springboard her own activism.

For Hoehn, getting the image right proved tougher than some, as the historical figure’s face isn’t one that is easy to Google; he worked from an old photo reference. To bring Tubman to life, he used a highly detailed crosshatching method.

“It didn’t feel like coloring it in was enough,” he said.

Others featured were more contemporary — Alexandria Ocasio-Cortez by Novak and Michelle Obama by Rettew.

Novak said a quote from the New York representative to Congress spoke to her — while campaigning, Ocasio-Cortez said, “Women like me aren’t supposed to run for office.”

Her personal art direction was affected as much by the pandemic as it was by her activist’s passion, Novak said. She felt a deep sense of isolation, but therein came less pressure and looser time constraints, making her overall experience of working remotely a positive one. She found simple colors using illustration markers helped make her vision reality.

The overall piece was inspired by street art and used a wheat paste adhesive — think guerilla poster glue — to make it ready for the outside world.

Connecting the figure drawings and inspirational quotes from the subjects are inserts featuring the 19th Amendment, which gave many women the right to vote.

The group hopes to hang their mural in a place where the public can see it.

“We have walls we like,” Lilly said, including some at the Community School.

However, that’s the easy route, which, for a group of protest artists, doesn’t seem the most fitting.

Novak said the real hope is for the piece to adorn a wall in town where people can pass by, take a look and feel the same inspiration from it the young artists felt as they made it.

There’s no real timeline for hanging the piece, it needs only finishing touches and it will be ready to go.

The group, which had to work in sections to accommodate hybrid-style pandemic learning, said as they near completion they feel a surge of energy.

Pen Hoehn feels more now like an activist, she said, having an art piece that makes a strong statement.

Rettew said she wants to do more of this work: “I can share what I feel with others and inspire them.”

For those who have a wall in need of some incredible art, email Carin Lilly at clilly@cvsdvt.org.