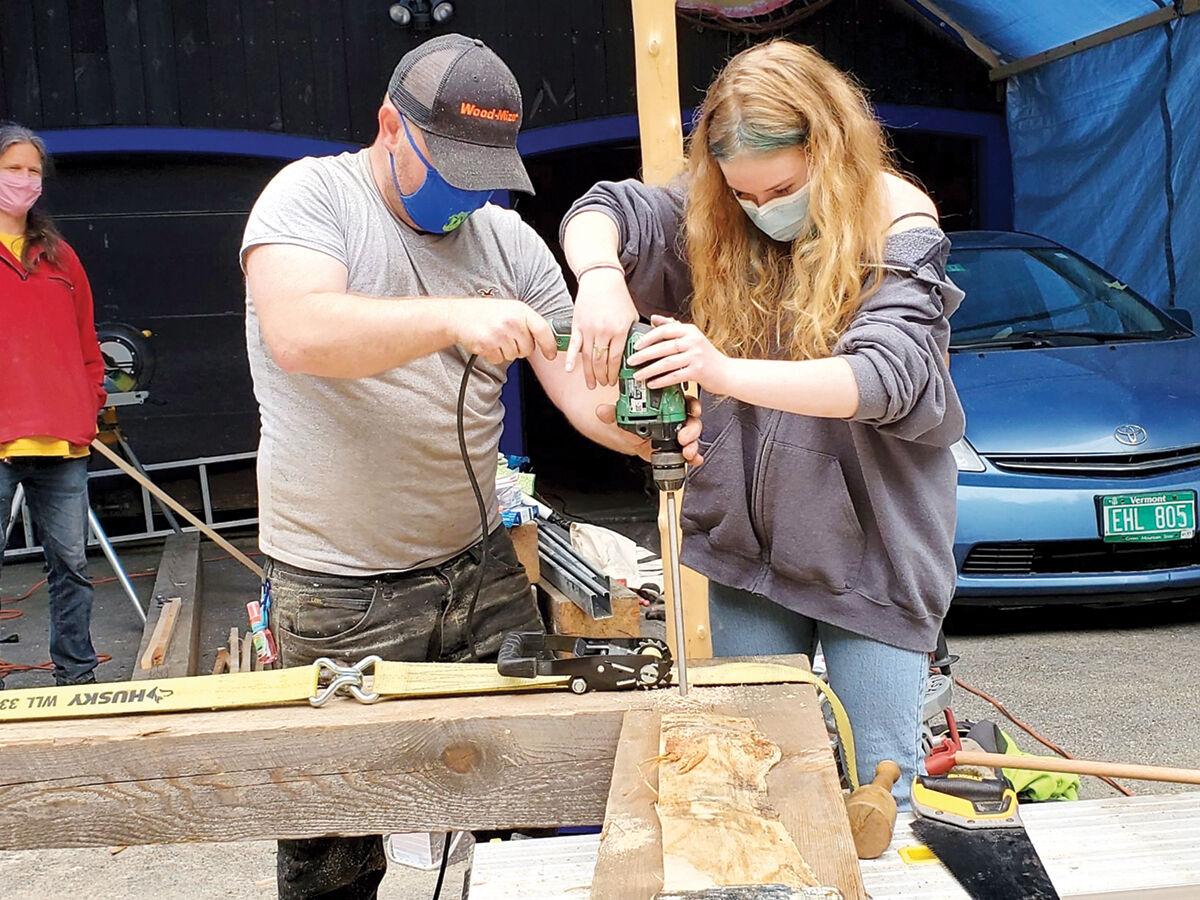 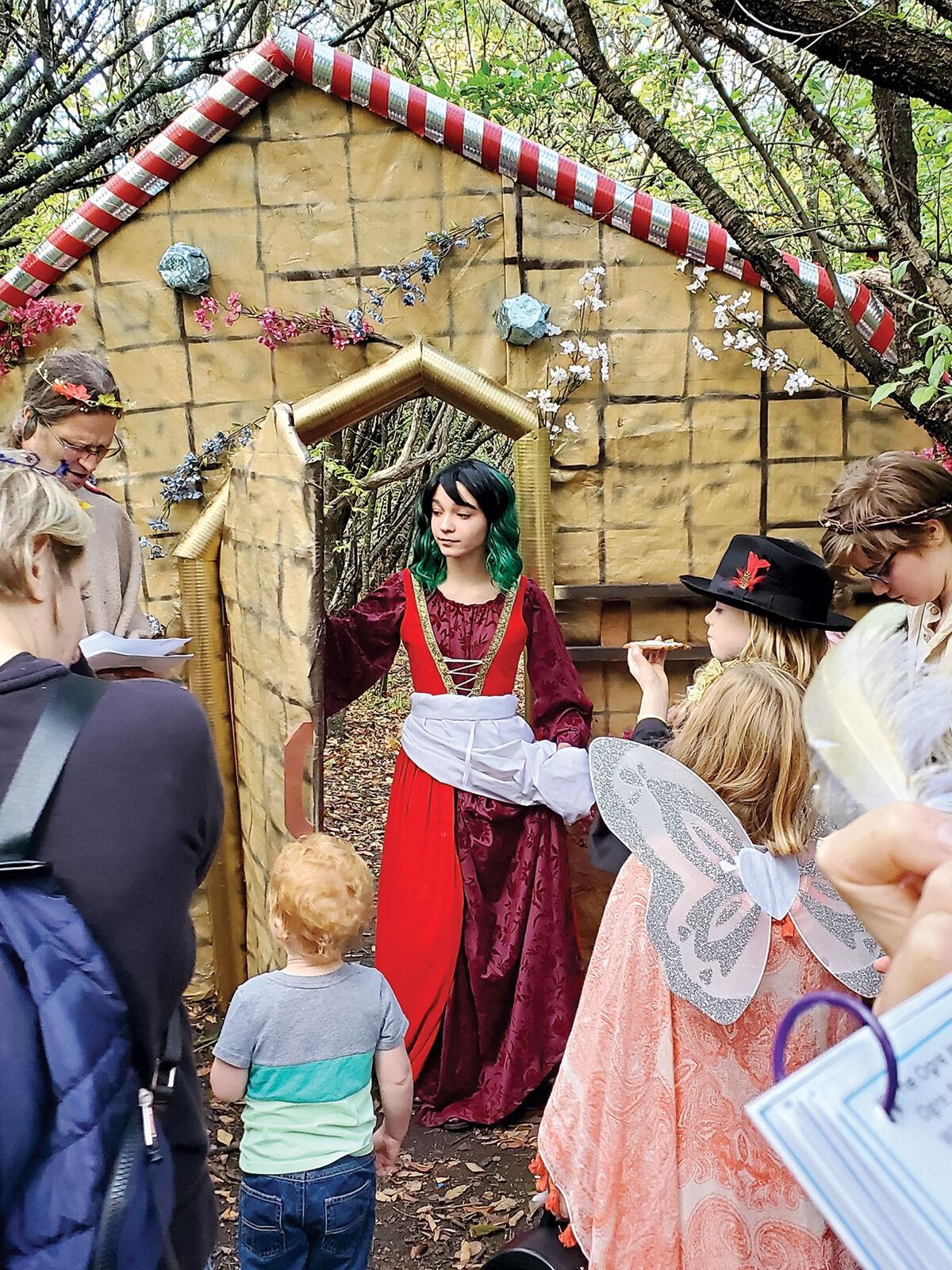 Borderlands, a production of The Way of the Bard at Shelburne Farms, features a walking tour from one performance to the next. 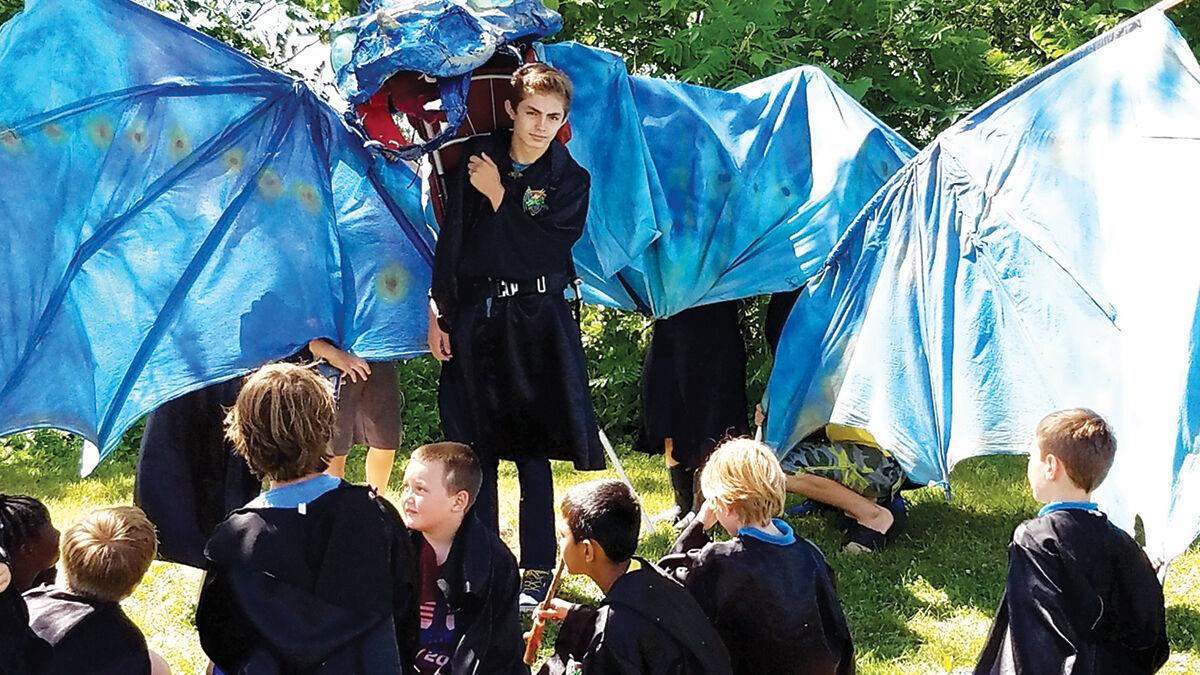 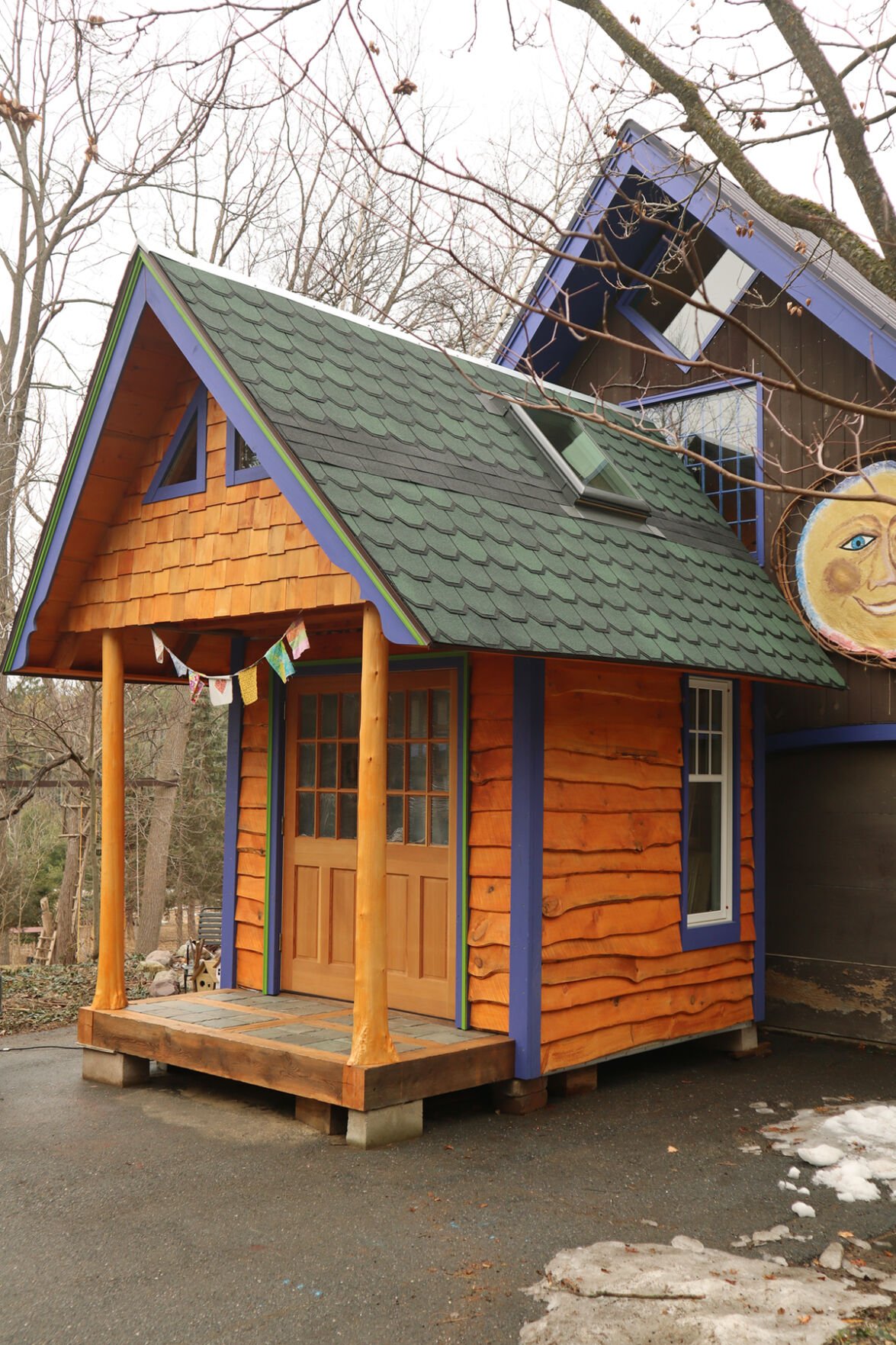 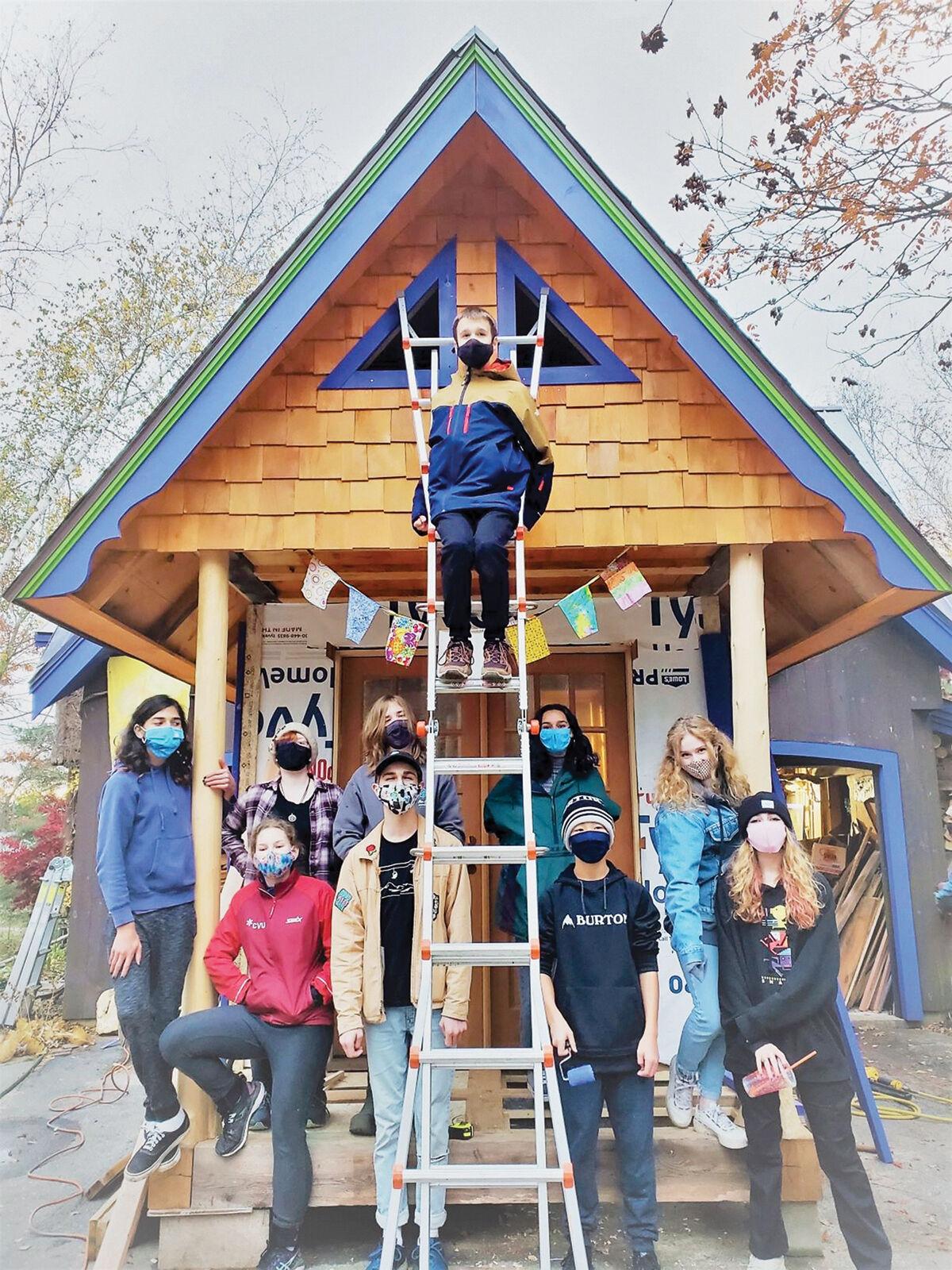 The Way of the Bard members pose in front of their hand-built tiny house.

Borderlands, a production of The Way of the Bard at Shelburne Farms, features a walking tour from one performance to the next.

The Way of the Bard members pose in front of their hand-built tiny house.

Caitlin Waddick is tired of school and most youth fundraisers, but she said she was happy to put in hours of manual labor building a tiny house to raise money for The Way of the Bard.

Waddick appreciated the creative ways the group finds to raise funds and the construction skills she’s acquired, like learning how to screw down slate for the deck of the tiny house’s front porch.

The Way of the Bard is a group of young people who meet in Shelburne to promote social change through their creativity, said Alison James, who founded the group with her husband Joplin Wistar.

Building the tiny house for a raffle to raise funds for The Way of the Bard is different, she said, and it has given her opportunities to work on the tiny house with her daughters.

“When can you say that it’s fun to be part of a fundraiser?” Waddick asked.

Raffle tickets to win the tiny house with blue trim and natural brown lapped siding are being sold for $10 each. The house is a post-and-beam structure. It’s 8 feet square inside, with a 4-foot porch laid with Vermont slate. The loft that extends above the porch and into the main room is also 8-feet square, and the (tiny) living room has a 12-foot cathedral ceiling. The house features Marvin windows and doors, a skylight, live-edge siding and cedar shingles, wide pine floors with walnut plugs, cedar porch posts and railing, a glass tile mosaic backsplash and carved peak decorations, James said.

The drawing will take place in June, with money raised paying for a trip to Wales this summer for 16 high schoolers, she said.

This is the second tiny house The Way of the Bard has built.

In 2016, the couple went to Ireland with a group of students on a similar trip.

The first tiny house was a stick-frame house, just big enough for a cot and a desk but, James said, the raffle raised $30,000.

This time the house is being built with the large timbers required for post-and-beam construction, as requested by the student builders. It is 8-foot by 12-foot with a living area downstairs, a sleeping loft upstairs and a front porch.

The students would have finished building the tiny house by this past fall, but COVID slowed construction down, with fewer able to work at a time and maintain social distancing, Wistar said.

The student members of The Way of the Bard milled the lumber for the siding. Eric James Peikin, a post-and-beam builder from Rhode Island, brought his portable sawmill to Shelburne, taught them how to use the mill and how to build the structure.

James connected with Peikin through a search on social media. Peikin was moved to help because as an adolescent struggling with a difficult home life, he had won a tiny house and he believes it changed his life.

On the trip to Ireland The Way of the Bard students walked from town to town, camped out and told stories, James said.

“We wanted to replicate what the old Bards did, by going the distance on foot and sharing stories, songs, and poems with the people we met along the way,” James said. “The focus of our work is to call attention to equity, social justice and respect for the environment. The way we travel is as gentle on the planet as we can imagine.”

The upcoming trip is to Wales is appropriate because bards originated there, she said, and it is where students will camp out and learn how to cook their own meals.

“We try to show them how they can have a wonderful experience that will cost hundreds of dollars, not thousands of dollars,” James said.

During summers before the pandemic, The Way of the Bard performed outside at Shelburne Farms under the name Borderlands. Audiences took a walking tour from one performance to the next, taking in different episodes of an overarching story told by students through poetry, dance and storytelling.

Wistar was a public-school teacher for three decades before he retired last year. He taught kindergarten and first grade at Shelburne Community School as Joplin James. Last year, he changed his last name to Wistar in honor of Caspar Wistar, an ancestor 13 generations back and a contemporary of Thomas Jefferson and Benjamin Franklin, he said.

Most of the members of The Way of the Bard are students at Champlain Valley Union High School, but members have come from other schools in the Burlington area and Stowe; one even came from Connecticut, James said.

The group meets one weekend a month. The members come to The Way of the Bard through word of mouth or they attended a summer camp for 8-12 year olds James sponsors called Enchantment Camp.

“They were so in love with coming here every summer. It was their one time in the year when they were able to be truly themselves, really be free and really be full of the spirit of the child,” James said. “So, they pushed us, and we ended up starting the first Way of the Bard group.”

One of the group’s first experiences was hiking in the Adirondacks, conquering five of the tallest peaks. Some of those students had never been hiking before.

“I think of my life’s mission as being to empower kids, so they don’t become victims, so that they can really find their passion and strength,” James said.

Elena Spencer, a student at Burlington High School, said she is less shy because of her experiences with The Way of the Bard.

“When I was younger, I felt upset about not being able to interact with people,” Spencer said. “The Way of the Bard has definitely made me feel more open to just allow myself to do the things I want to do instead of just things I feel like I should do.”

At a Way of the Bard party where professional instructors were teaching swing dancing, Spencer recalled, she was participating rather than hanging back in the shadows and worrying about what people thought of her.

Instead, Spencer said, “I was out there, having a good time.”

A theatre adventure along wooded trail

Rusty Zia as an owl and Ian Story as a deer as part of The Way of the Bard’s outdoor performance, Borderlands, that ran three Saturdays this O…