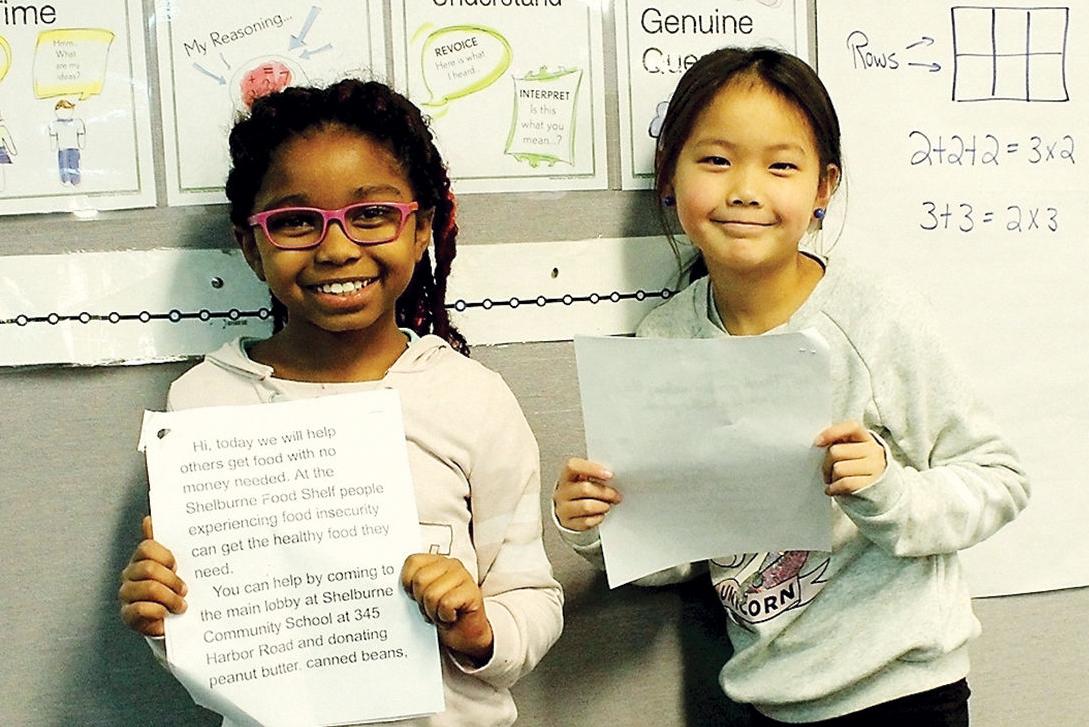 Standing proudly with their script, students in the video group are working to produce a short piece to run in the Shelburne Community School lobby. 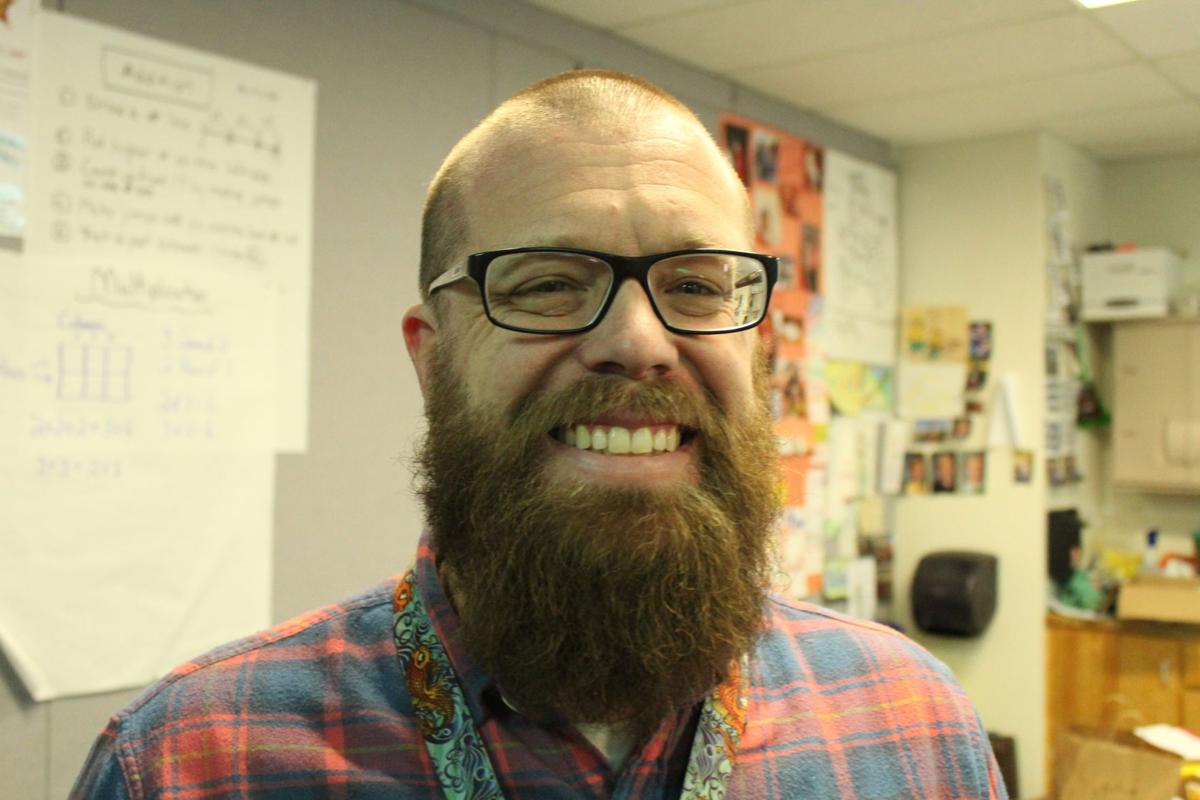 Third grade teacher Adam Giles is working to teach the students of helping and participating in community. 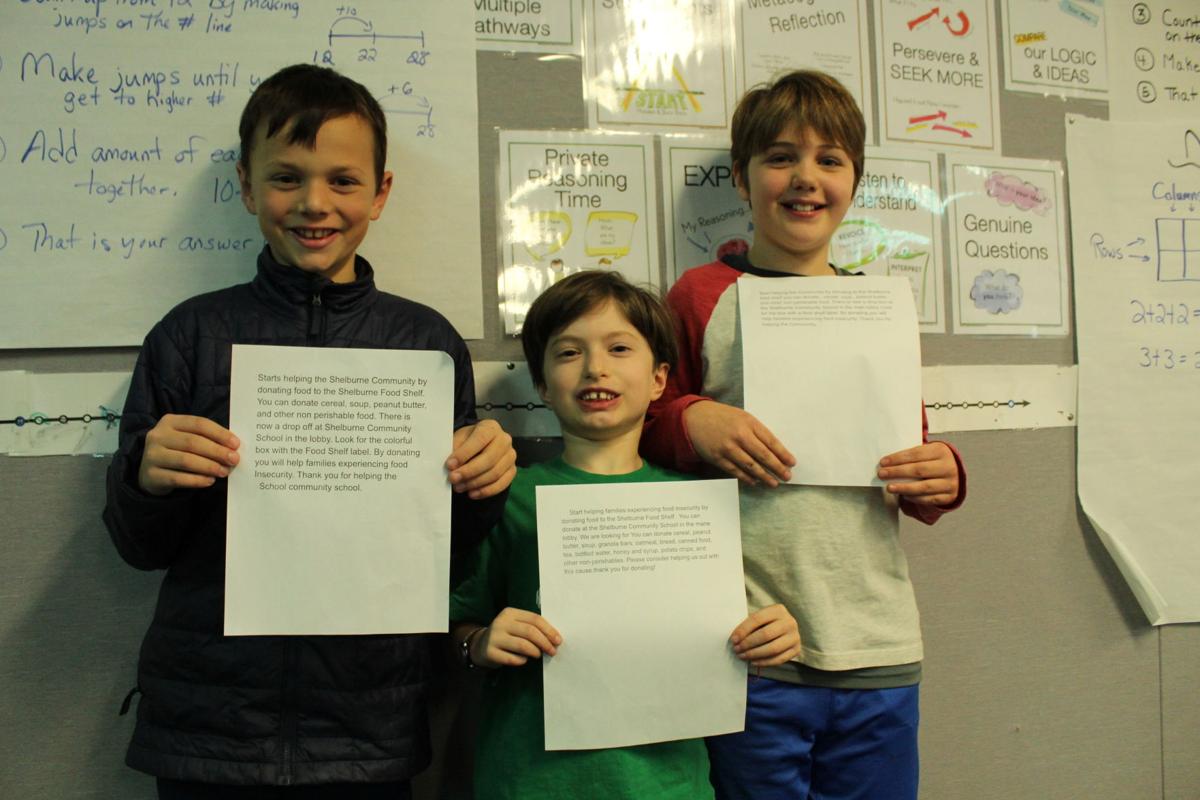 Students at the Shelburne Community School show how they are helping the local food shelf. 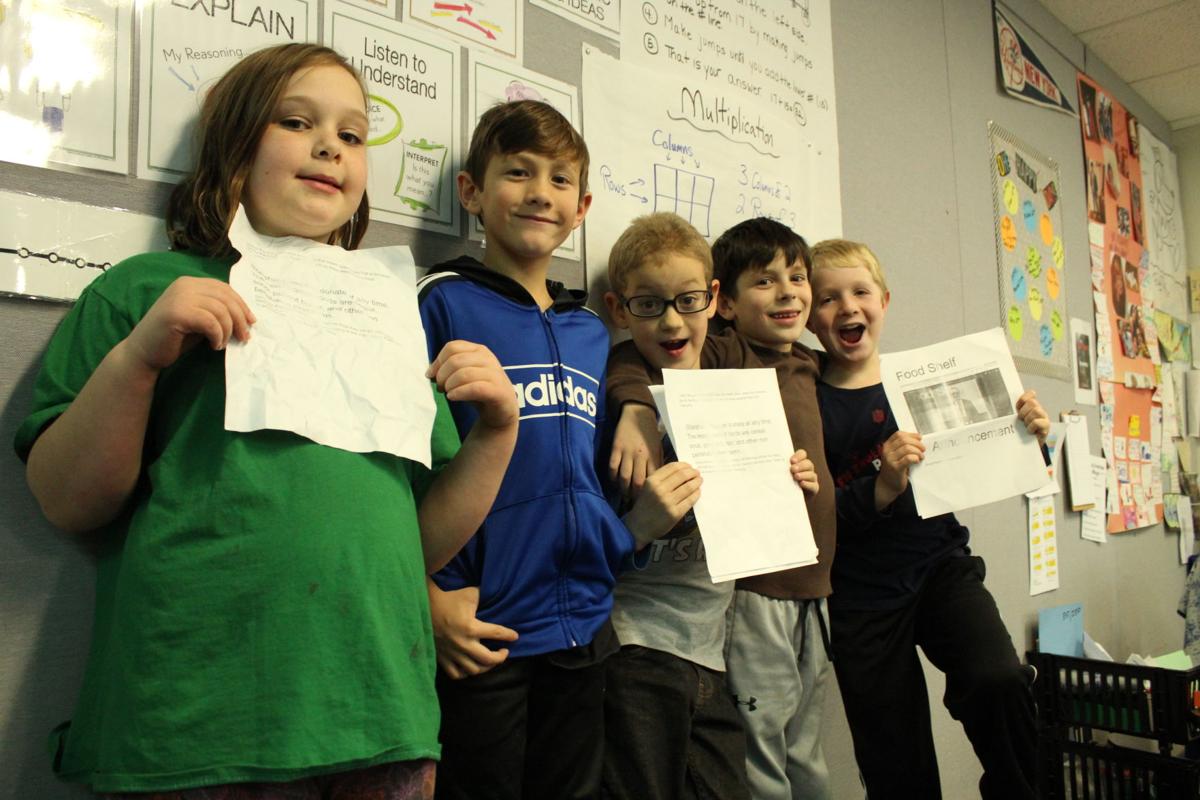 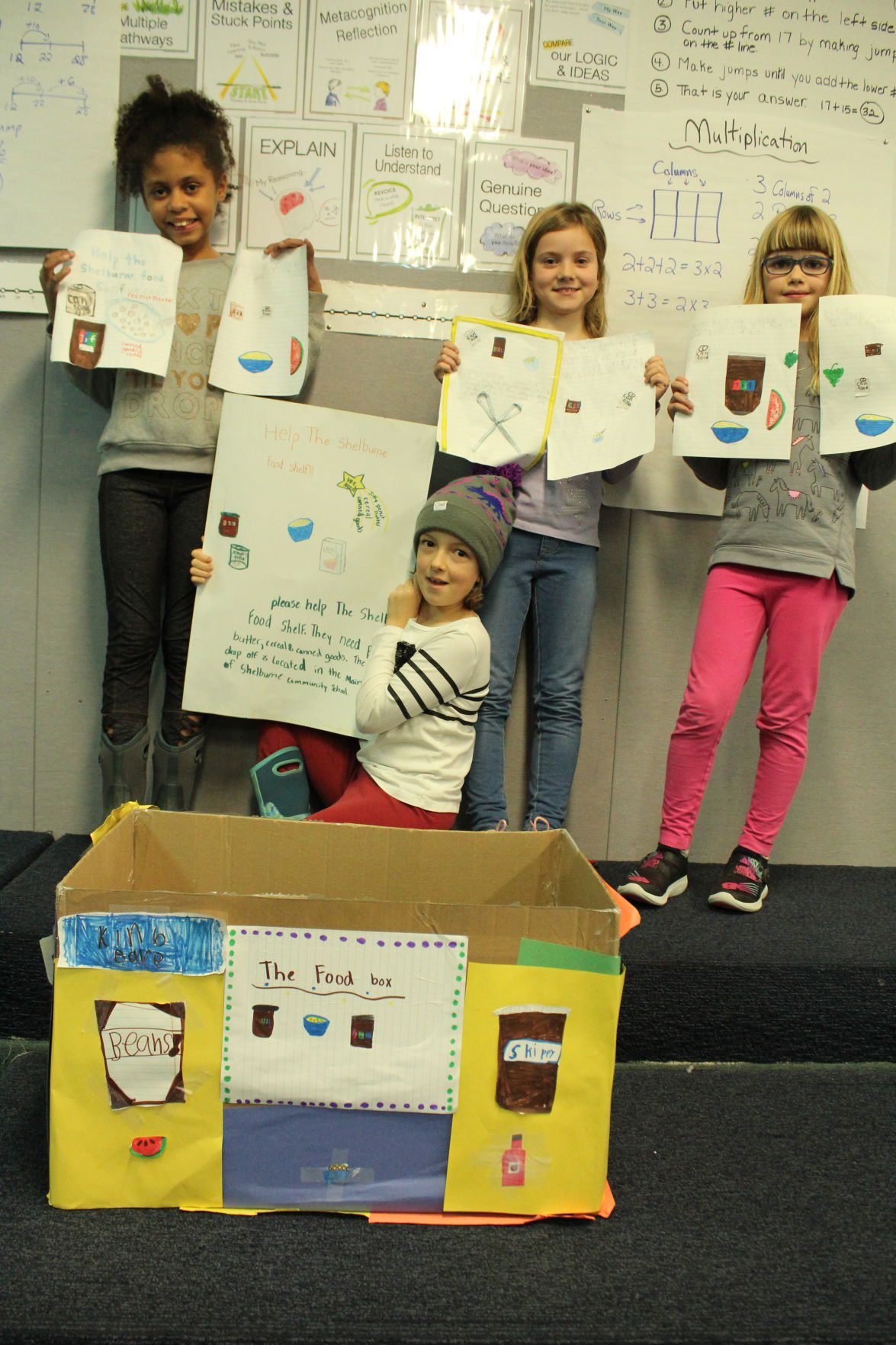 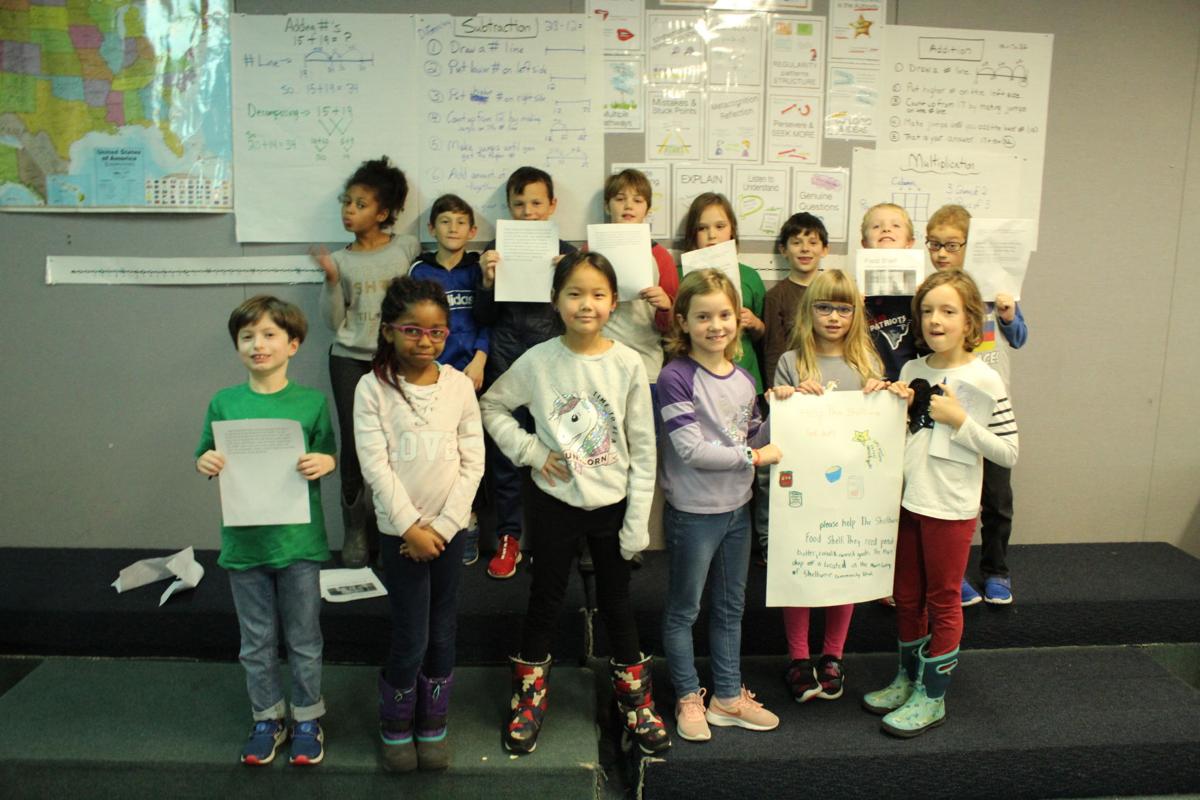 Standing proudly with their script, students in the video group are working to produce a short piece to run in the Shelburne Community School lobby.

Third grade teacher Adam Giles is working to teach the students of helping and participating in community.

Students at the Shelburne Community School show how they are helping the local food shelf.

Listening to third graders in Adam Giles’ class at the Shelburne Community School is a lesson in empathy.

The students speak about social issues with the respect and grace that is at times lacking in those decades older. “Homeless” becomes “experiencing homelessness.” “Hungry” turns into “food insecurity.”

They are the prime example of caring. And they are putting in the work to practice what they speak.

Earlier this year, the class began a unit on community and what it looks like to engage with one on local and global levels. To take their lesson to the next level, the students decided to focus on their hometown food shelf, examining how it benefits the community at large.

Because the town’s food shelf is open for donations infrequently – with hours on the second and fourth Tuesdays and Thursdays of the month – the students wanted to offer another location for drop-offs that could make their way to those in need.

Previously established donation sites include outside the Food Shelf door, at the Shelburne Market, Pierson Library and Paragon Design – look for green bins at each spot.

Adding the school as a location was convenient, according to student Vivienne Gebhardt, because of the high volume of people who visit the campus. Plus, the class realized, school being in session five days per week meant an opportunity for those who couldn’t make it to the food shelf during open hours to give the food they wanted to share.

For its final transport, the students will bring food to the food shelf from their own drop box.

Interestingly, this work was all done before the box was even publicly available – the students and Giles have been putting their energy into behind-the-scenes efforts to publicize this project, by sharing news during morning announcements, creating posters with information, even contacting the Shelburne News to pitch this story. A video project is in the works, too, with a student-written script. It will be displayed in the school’s front lobby to inform guests.

While the food shelf itself accepts perishable donations, the students opted for non-perishable goods, including high-need items like canned beans, peanut butter and cereal. Student Talania Mount-Namson said this was to allow for food storage.

Aside from a fun and fulfilling project, the class learned lessons that they can carry with them throughout their lives.

“I didn’t know much about it,” Mount-Namson said of the food shelf. “If somebody doesn’t have much food, they can get what they need.”

Parker Smith explained, “We can help people who are experiencing food insecurity.”

Giles said with the work came an extra lesson, discussing misconceptions and changing perceptions – people who may experience hardships cannot be identified by their looks, for example.

Parent Ashely Prout McAvey learned about the project from her son Reid, one of the participating students.

“I thought it was wonderful that rather than stopping with a simple field trip to learn about the importance of the food shelf, these kids decided to go the extra step to find their own way to further support the mission of helping others right here in their own community,” Prout McAvey said in an email. “I’m grateful to the teachers at Shelburne Community School for fostering this desire to help others – these life lessons and especially this one, the Golden Rule, are ones that will mean the most to these beautiful kids for the rest of their lives.”

The young humanitarians will build on their work within the community, too. They are already planning a clothing swap for the spring.

Students deck the halls of the Shelburne Police Department

Best of the boards