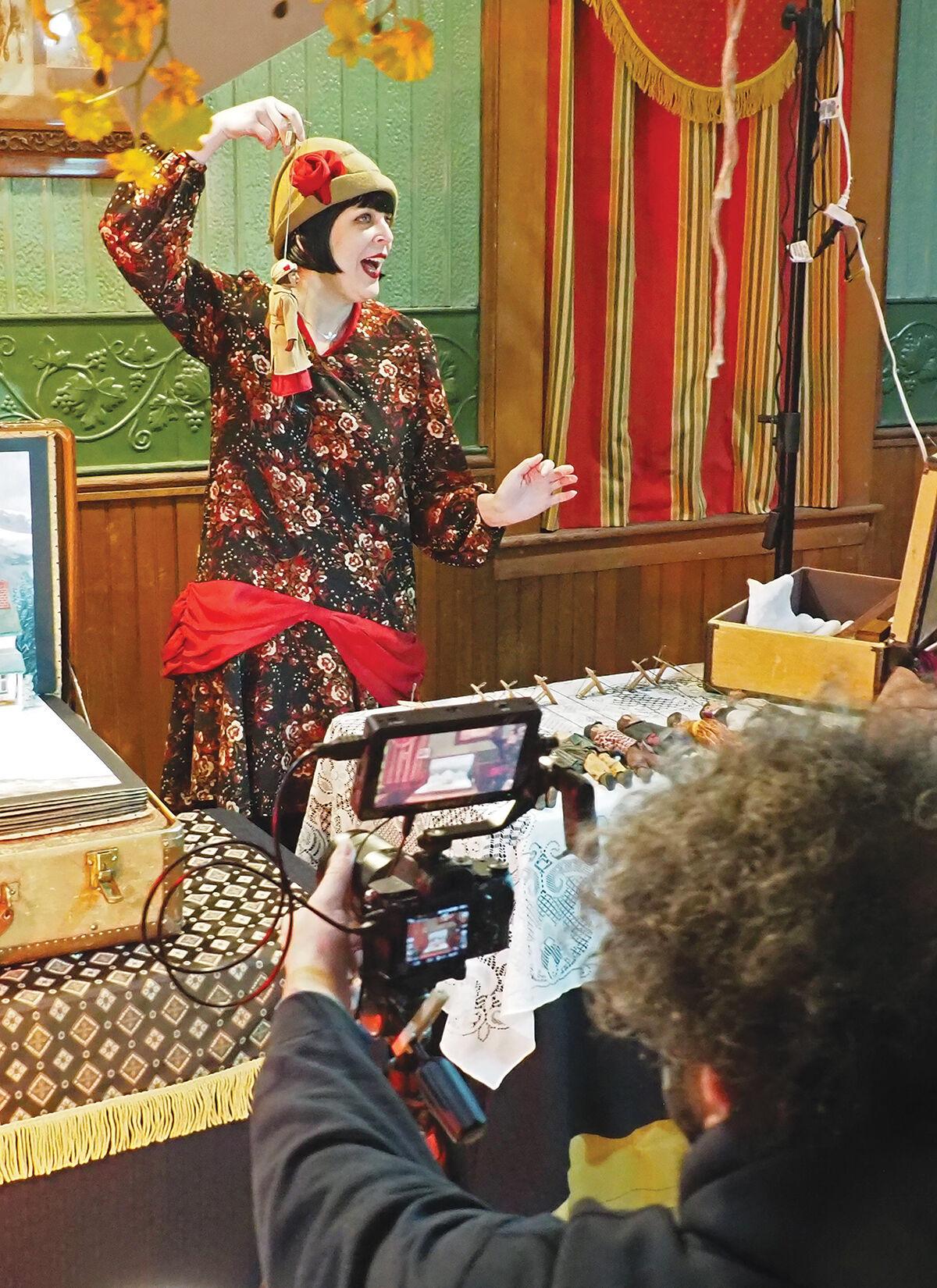 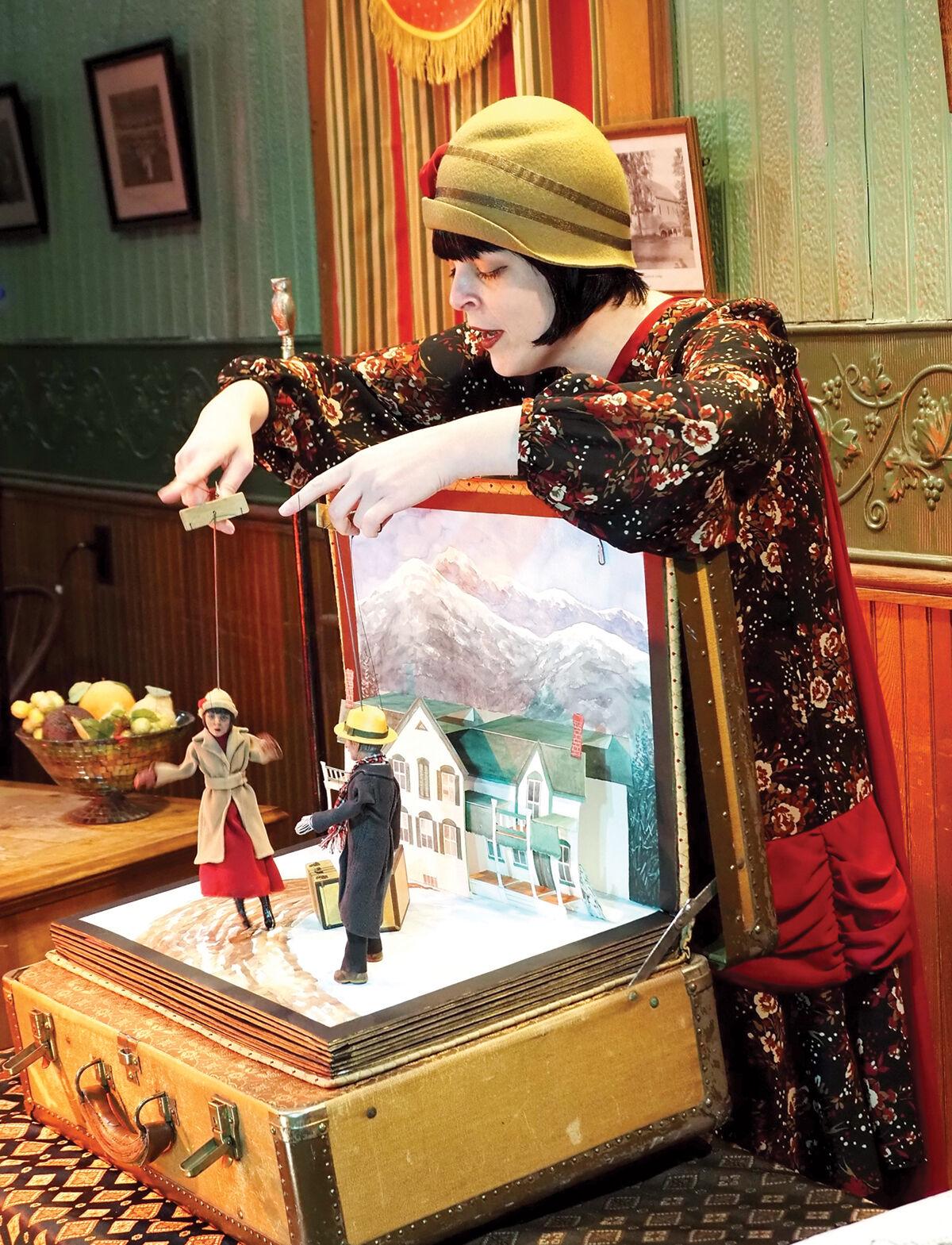 Sarah Frechette performs “The Snowflake Man” at the East Hardwick Grange, where the show is being filmed. 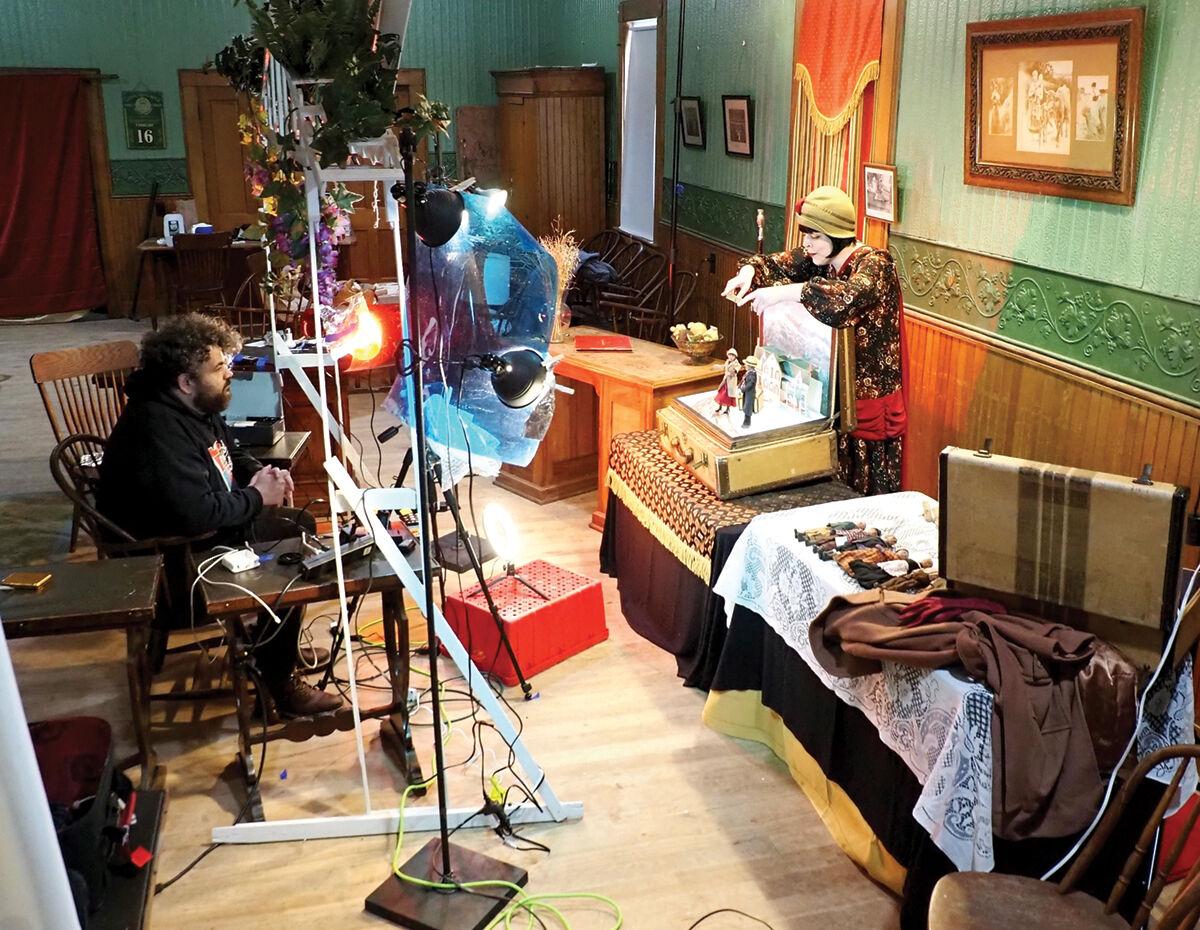 Jason Thibodeaux films Sarah Frechette as she performs “The Snowflake Man” at the East Hardwick Grange. 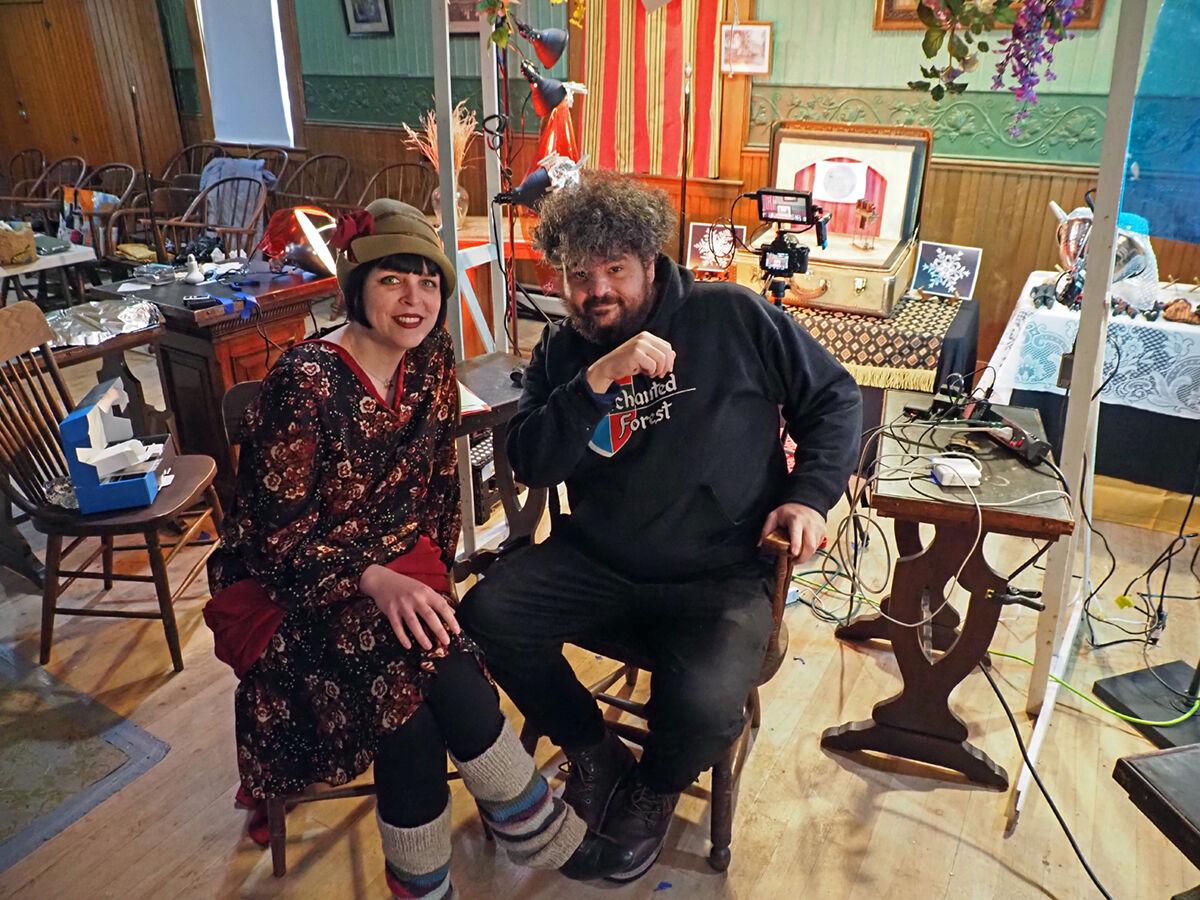 Sarah Frechette is performing her one-person puppetry performance of her original play “The Snowflake Man” and her partner Jason Thibodeaux is filming it. 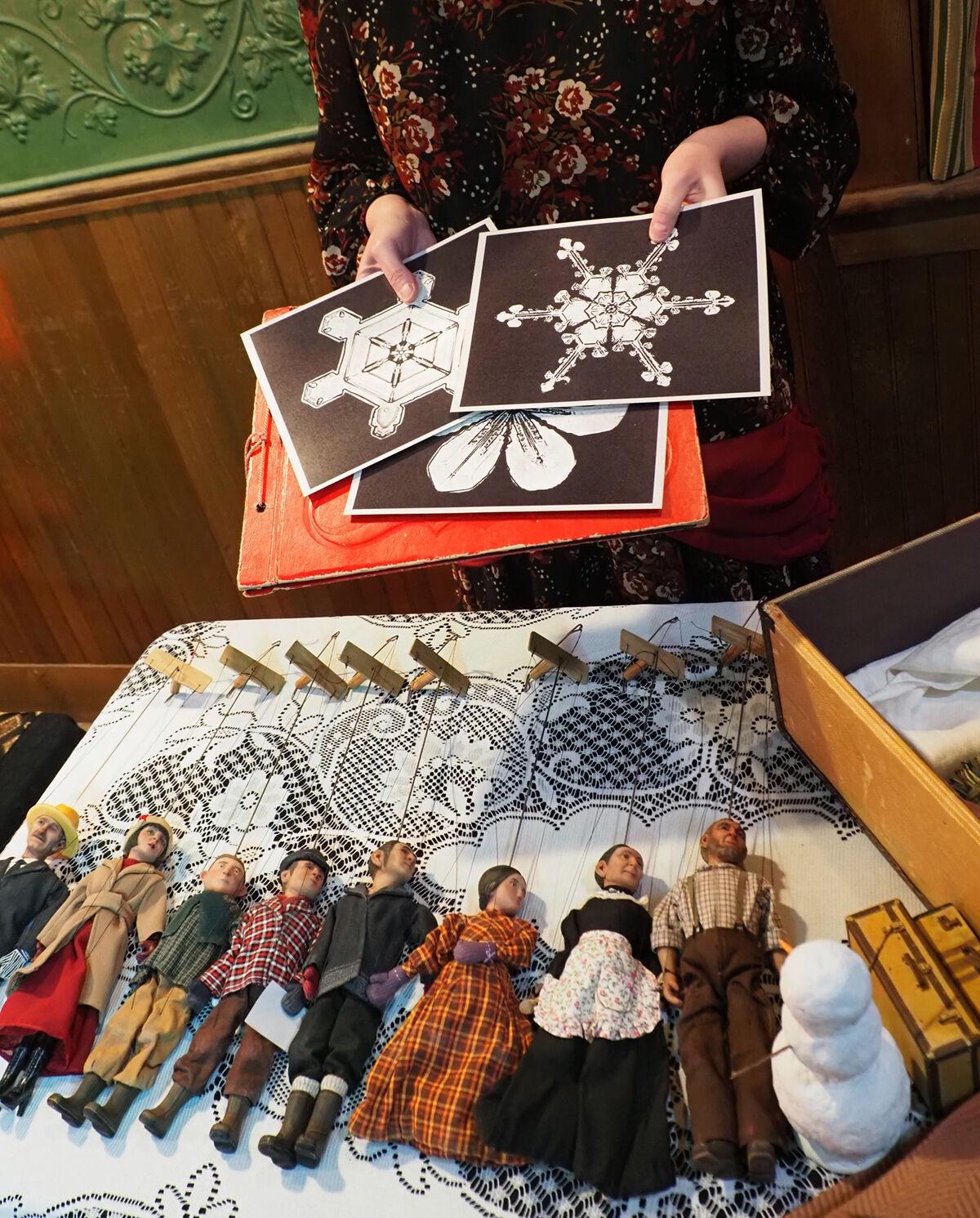 With her puppets in the foreground, Sarah Frechette holds some snowflake photos her grandfather purchased from Snowflake Bentley in 1917.

Sarah Frechette performs “The Snowflake Man” at the East Hardwick Grange, where the show is being filmed.

Jason Thibodeaux films Sarah Frechette as she performs “The Snowflake Man” at the East Hardwick Grange.

Sarah Frechette is performing her one-person puppetry performance of her original play “The Snowflake Man” and her partner Jason Thibodeaux is filming it.

With her puppets in the foreground, Sarah Frechette holds some snowflake photos her grandfather purchased from Snowflake Bentley in 1917.

The East Hardwick Grange — officially the Caledonia #9 Grange — has been transformed into a movie set for the filming of an iconic Vermont story.

Puppeteer Sarah Frechette, originally of Georgia, dressed in flapper’s garb with music from that time playing in the background, steps onto the stage of the Grange, opens a trunk to reveal a pop-up book whose pages become a stage for her original rod puppets to tell the story of Wilson “Snowflake” Bentley.

Frechette is performing her one-person puppetry performance of her original play “The Snowflake Man” and her partner Jason Thibodeaux is filming it.

Filming is expected to wrap, with editing done, this week to be ready for a March 1 premiere sponsored by the Sandglass Theater in Putney.

“The Snowflake Man” tells the story of Bentley of Jericho, the first person to photograph single snowflakes and who popularized the truism that no two snowflakes are alike.

After COVID-19 halted touring, Frechette had the idea take the show to the screen.

“Then everything just shut down and I’ve been trying to figure out how to continue doing some of what I do. We’re joining forces to make this film of the production so that it can still carry on, until I can get back into the theater safely,” Frechette said.

The story is told with traditional Czech puppets, performed on a tabletop. The setting is a pop-up book, the pages of which were painted by children’s illustrator Bruce Lee, another Vermonter, fine artist and children’s book illustrator from Williston.

Frechette said everything takes place on a pop-book stage inside an antique trunk. She “shrinks” to puppet size to play all of the characters and travels back in time to tell Bentley’s story.

The story follows Bentley’s life — how his parents took all of their savings to buy him a camera and a microscope because of their faith in their self-taught scientist son and his conviction that he could photograph snowflakes. It was quite a feat to get a picture of a snowflake before it melted.

“I call it ‘edutainment’ because it’s entertaining and educational and I’m hoping as the audience sits there with me, they will learn this new information,” Frechette said.

The story of Snowflake Bentley is one she grew up with. Her grandfather bought some of Bentley’s photographs in 1917 and was always happy to share his photos and stories about the man behind them.

She created the show about 10 years ago with a grant from the Vermont Arts Council shortly after her grandfather died.

“It was kind of one way to create a love letter to my grandpa,” Frechette said.

She uses some of the photos her grandfather bought from Bentley in the show.

Bentley lived from 1865-1931, when he died from pneumonia, caught while walking in a blizzard.

Getting grand at the Grange

How’d the show end up at the historic grange building? The credit for that goes to fellow puppetteer Rose Friedman of East Hardwick.

The two met through the Shelburne Museum show, “Puppets: World on a String,” which featured Frechette’s work alongside the likes of Jim Henson and Andy Warhol.

“We’re trying to bring it back into the community’s life and make it a space that people can use in the way that Sarah is using it,” Friedman said of the Grange.

Frechette was scouting for a historical space to film her story — and the building fit the bill.

The Caledonia #9 Grange is one of the oldest continuously performing Granges in the state, Friedman said.

The Grange movement started as a way to get farming back on its feet after the Civil War by having farmers join together to negotiate prices and share farming tips.

“The Grange organization’s place in culture has shifted quite a lot. It once was a union organization for small farmers. It’s not needed for the current reality of what is happening in farming in the state,” Friedman said.

Friedman hopes to help revitalize her town’s Grange by growing its use as a performance space.

“People walk in and are amazed that this gem is here,” she said.

It used to be that one had to be a farmer to join, but farming is not a requirement now.

To keep the Grange vital in the East Hardwick, it sponsors things like a children’s parade, apple pressing, a plant swap and a community meal.

Friedman and her partner Justin Lander own Modern Times Theater.

They met as performers with Bread and Puppet Theater, the political puppet theater in Glover, and ended up together in Hardwick.

She said over the years they’ve worked a lot of odd jobs but now they are theater makers.

Modern Times Theater was inherited from Friedman’s parents; she grew up in New York when she wasn’t on tour with the family.

So far, the couple has managed to keep making a living as performers during the pandemic — a makeshift stage is pulled behind their van, making library and other outdoor shows possible.

A hit for all ages

Thibodeaux worked for 10 years for Laika Studios in Portland, Ore., painting puppets for stop-motion movies including “Boxtrolls,” “Kubo and the Two Strings,” “Coraline” and “ParaNorman.”

He directed the original version of “The Snowflake Man” and has watched it evolve over the last decade.

“It’s kind of been a hit,” Thibodeaux said. “The audience, no matter what age, enjoys it. It has a very universal quality.”

He said it was a revelation for him to work on a show like this because his personal film projects tend to be darker.

“‘The Snowflake Man’ comes from Sarah’s heart. It’s proof that I can do something more mainstream, and it works, too,” he said.

Because of Laika Studios, Portland has become sort of magnet for people working in stop motion filmmaking.

Through this heavy-hitting matchup with the show and the Grange, Vermont just might be close behind.

For more information about how to watch “The Snowflake Man,” visit puppetkabob.com/calendar.