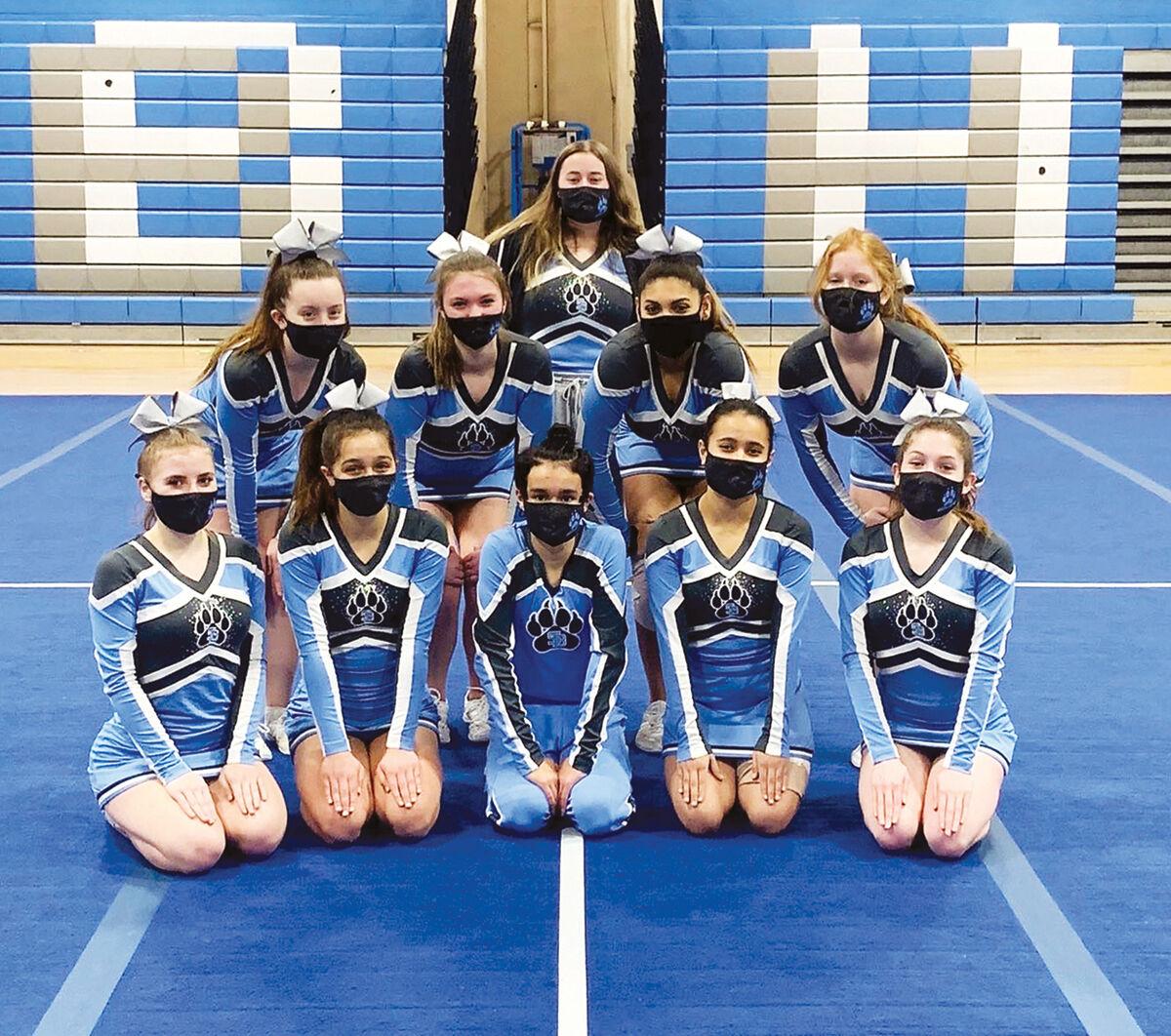 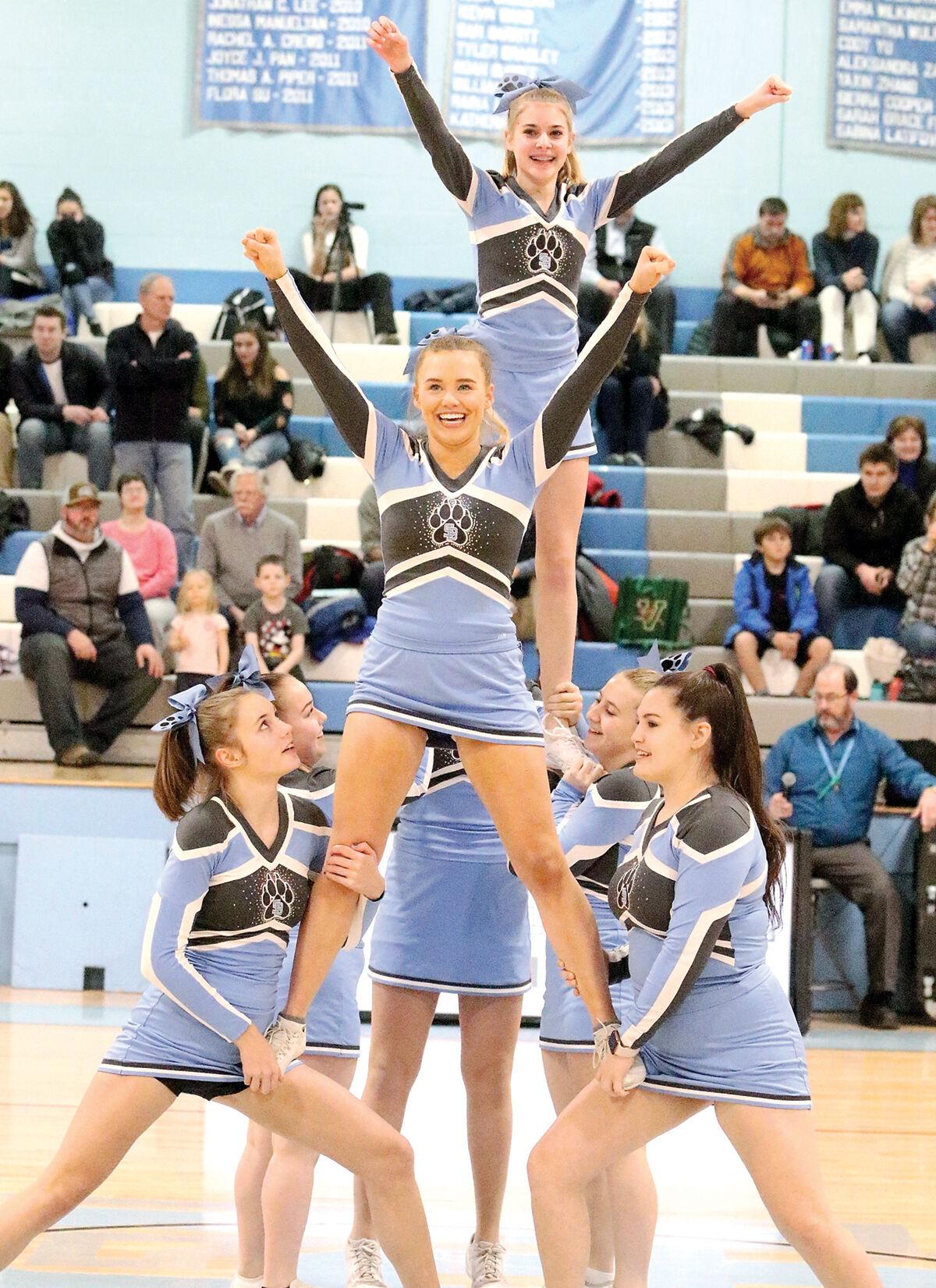 Competition didn’t look this way during the winter 2021 season, as stunting and calls were not allowed. That didn’t stop determined student athletes, though.

Competition didn’t look this way during the winter 2021 season, as stunting and calls were not allowed. That didn’t stop determined student athletes, though.

No human pyramids, nor calls to pump, pump, pump it up were allowed at the State Cheerleading Competition last month because of COVID restrictions on school sports.

“I’m so proud of them. They had fun but they worked so hard at the same time,” said Lynn Kynoch, South Burlington varsity cheerleading coach and assistant to the athletic director.

Before a competition, the team members normally gather together, style their hair, paint their faces in glitter and makeup and board a bus together, said Kynoch. But this year, all competing teams stayed at home, sending in video recordings of their routine for judgement.

“It’s funny. They’re usually in front of a huge crowd,” said Kynoch, and this time the team performed for an empty gym. “But it was still nerve wracking!”

When the competition results were announced on March 21, the day after Kynoch submitted the team’s recording, she set up a big screen to watch the announcement and gathered the team in the hopes of maintaining a little magic.

“They all were linking their arms in their seats, and when they announced we won second place, they got so excited,” recalled Kynoch. “It was a great way to end the year.”

The team’s lone senior, Bree Wright, said, “I was honestly so excited and proud of the team because we worked so hard this season and it shows in us winning second place that hard work really does pay off.”

She has cheered all four years of high school and returned this year for the friendships.

“I love the bond that the team grows over the season and how surprisingly close we all become,” she said.

Since the COVID-19 pandemic began a little over a year ago, school sports across the country have primarily been benched. Just before Vermont students departed for winter break in December, state officials announced guidance allowing contact sports to resume socially distanced practices and eventually games, but at a glacial pace.

Despite the return to the court, many teams throughout the state have dropped out of winter competitions after COVID scares, including the South Burlington High School boys’ hockey team.

When the guidance first came out, Kynoch recalled some controversy over whether cheer teams would be allowed to do two integral features of cheerleading: stunting, which involves lifting and acrobatics, and vocalizing, the cheer part of cheerleading.

Officials concluded that the athletes on the bottom, lifting their teammates over their head, did not have enough space between each other.

“We lost a lot of people because of that. They really, really enjoyed that part of cheer,” said Kynoch.

So instead of high-flying basket tosses and cheer chants, the team pumped up their dancing and tumbling skills.

Since lifting was nixed, Kynoch and the team chose not to hire a choreographer and instead create their routine from scratch. The pivot ended up being one of the best parts of the season.

“This year we did it all ourselves,” said Kynoch. It made the process less stressful, and more meaningful when the team won.

“I love being on a team where we all get to share our creative ideas,” Wright added. She struggled without stunting, one of her favorite elements in cheerleading and the area she most excelled in. But by the final competition, she realized “that I am not only good at stunting but also jumps, dancing, and cheers,” she said.

The team this year is smaller and much younger than in previous years, said Kynoch, with only two upper-class students, including Wright. But Kynoch sees big things in their future, after witnessing their skill levels grow over the last year and carry them to second place.

“They’re so gung-ho, it makes it easy to coach,” said Kynoch.

This is the highest Wright has ever placed in her high school career, and a cheerful send-off for her next chapter: studying veterinary science in college. Although this year has been difficult, and not how she pictured her senior year, Wright feels like she’s also gained new perspectives in the pandemic.

“This year made me realize who the real people in my life are and that I should not waste my time on anyone who does not care for me like I do them,” said Wright. “It has also made me realize that even without stunting, I love cheerleading and it makes me extraordinarily happy to do and compete with my team.”

Normally, the team would advance to the regional New England championship, but it was canceled this year.

With winter sports officially over at the end of March, the district is gearing up for a tentative spring sports season.