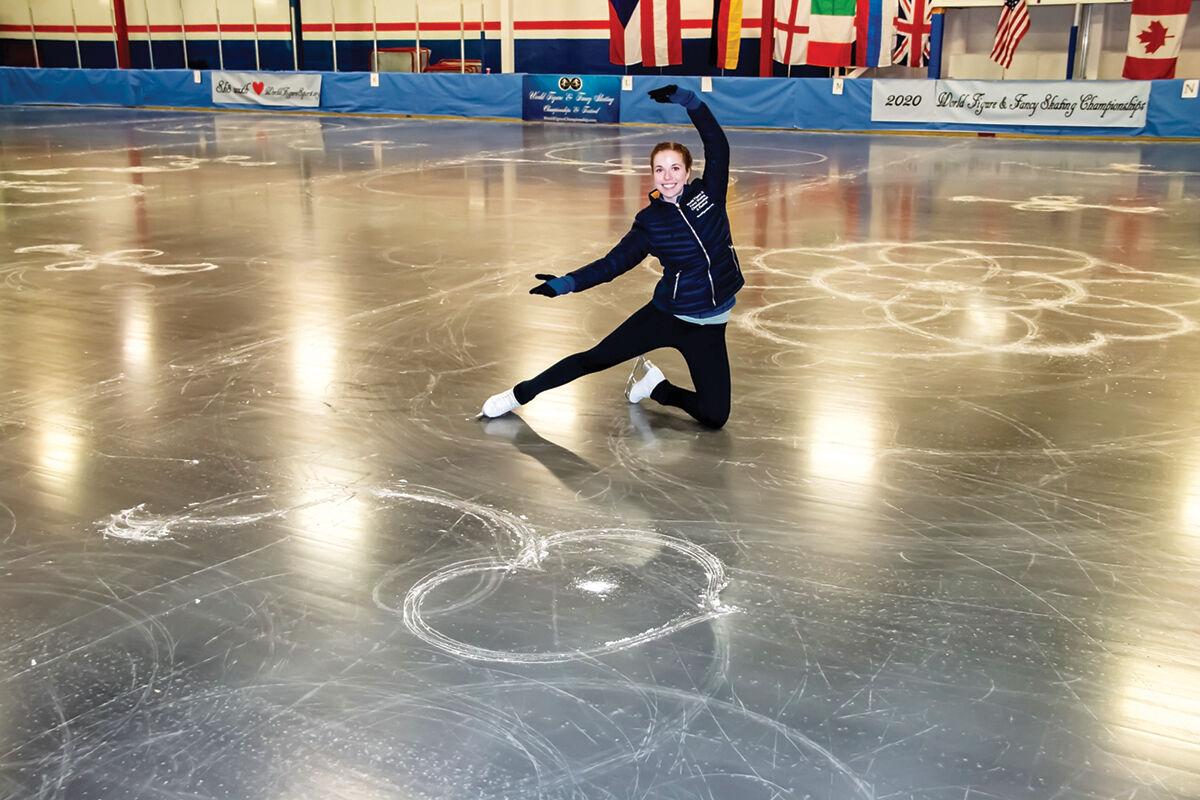 A component of the competition asked skaters to invent their own creative figure. Emma Cooley’s figure — a heart-shaped cherry with stem — was coined the Cooley Creative Composition at World Figure Sport. 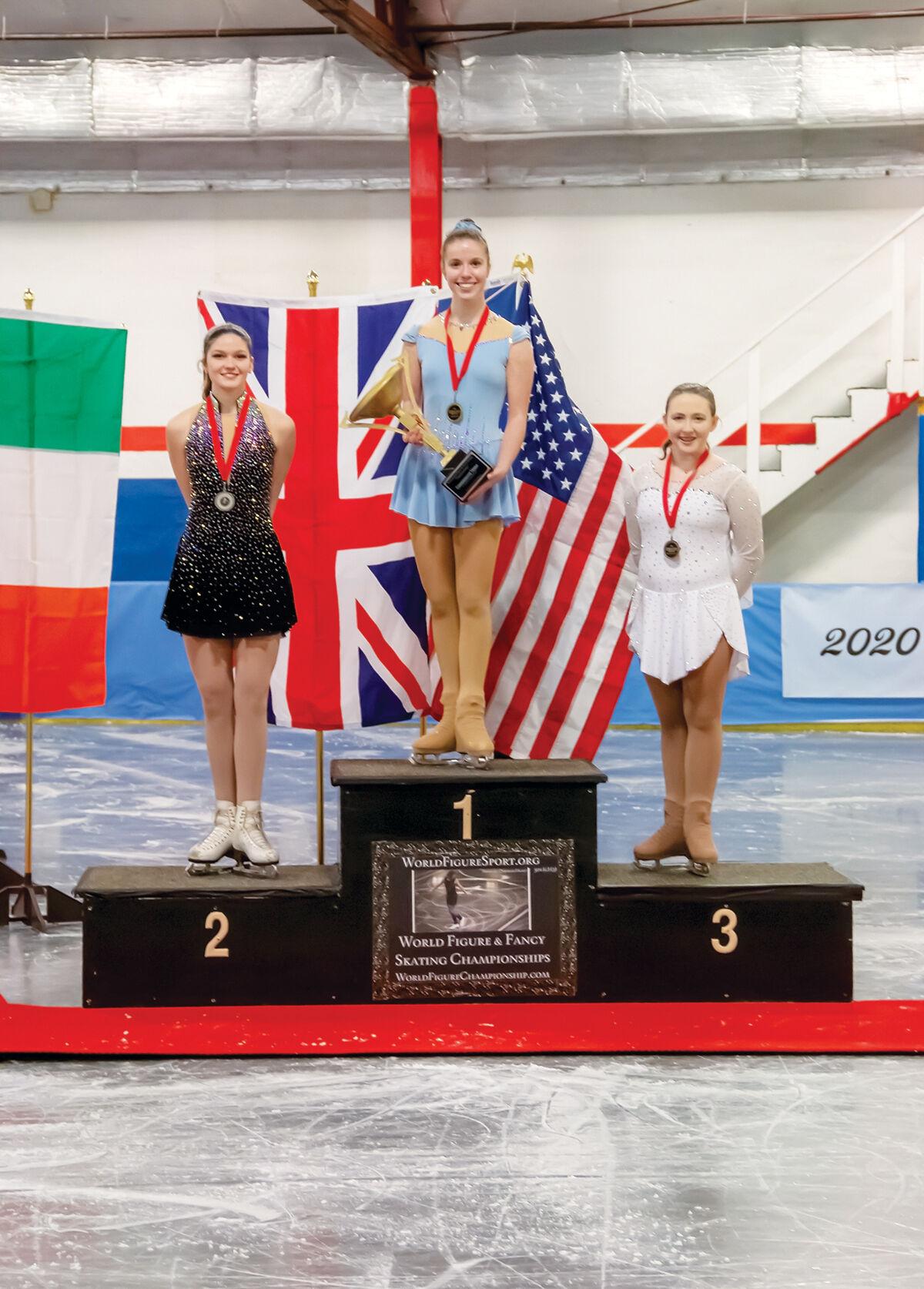 A component of the competition asked skaters to invent their own creative figure. Emma Cooley’s figure — a heart-shaped cherry with stem — was coined the Cooley Creative Composition at World Figure Sport.

Someone hung a medal around Emma Cooley’s neck and ushered her towards a podium next to two girls in sparkling leotards.

“Wait, what did I win?” she asked, confused.

The last time Cooley, 16, competed as a figure skater was in early March just before the COVID-19 pandemic hit Vermont. After months of staying at home and practicing triple salchow jumps in her garage, Cooley traveled from her home in South Burlington to Plattsburgh for the Junior World Figure and Fancy Skating Championship last December.

She realized she’d won first place as she climbed onto the tallest podium.

“It felt really cool. I remember I was happy with what I did but so much was going on and there were some microphone problems,” Cooley recalled. “I didn’t know what was happening until the last second.”

Cooley’s mother, Robin, remembered sitting in a nearly empty stadium except for a few coaches and family members, and beaming under her mask. Neither Cooley’s coach nor the rest of her family could attend the competition due to COVID-19 precautions.

“I was absolutely floored when they announced her name,” Robin said. “It was hard for me to sit back and guess how she did relative to the other skaters.”

Since Cooley had never skated in a competition with the same style or judging, she wasn’t sure what to expect. Competitors’ scores weren’t posted after each round, Robin explained, and the judges were looking for different styles than Emma was used to, which “pushed her to try skating in a different way.”

Cooley began her figure skating career as a curious six-year-old at summer camp.

Her first time ice skating was a happy accident.

“I remember it was a crazy cold day, super windy,” Robin said. Since the ski lifts were likely closed from high winds, the family opted for a public ice session.

“She loved it; she seemed to be a super fast learner and caught right on,” Robin said.

After a few lessons, Cooley attended a summer skating program called Cool Camp, where she ultimately fell in love. According to Robin, her daughter’s eyes would “practically explode” when she saw the older skaters practicing jumps and flips.

“She was full of joy when she skated,” said Martha Harding, Cooley’s coach for the last seven years. According to her, judges knew Cooley as “the happy girl in the polka dot dress.”

But as the budding skater’s skills matured, and she started practicing more advanced jumps, her joy seemed to slip under the weight of the competition.

“I like to put lots of effort into what I do. I take it very seriously,” Cooley said — competing allows her to show her skills and garner feedback for improvement. But the pressure to land advanced jumps and hit all her cues weighed on her confidence.

“It got to a point where I was getting in my own head a lot; it would stop me from competing the way I should’ve been able to,” she said. “I had a hard time having fun at the competition.”

While Robin admits that she sees her daughter through rose-colored glasses, she also thinks that Cooley is her own harshest critic.

“Very rarely would she say she skated it perfectly,” Robin said. “It’s fun to watch her perform and compete, but it’s scary too because she puts so much effort into her practice time — it’s incredibly challenging because you get this one shot to do it the way you know you can do it. It’s a lot of pressure and there are no do-overs.”

Now, Cooley reminds herself to have fun. “It’s a sport; nothing bad is going to happen if I don’t win,” has become a mantra.

“It’s a very weird mindset when you’re competing. It’s only for two to three minutes, and you’re so focused on what you’re doing, there’s not a lot of room for outside thought. It’s kind of like a trance,” she said, laughing.

Aside from the mental-emotional side of competing, landing advanced jumps also poses a challenge.

Cooley has landed a triple salchow jump twice and attempted a triple flip — the hardest jump in her repertoire.

What happens if she falls during a competition?

“I learned to make peace with falling a long time ago,” she said. Part of that means learning how to fall correctly so she won’t injure herself.

“I get back up and get going; smiling like, ‘I did that on purpose,’” she added, grinning.

“It can be a shock to see where the lines are when you first skate on black ice,” said Harding. Lines are harder to see on white hockey ice so the competition used black ice for judges to better discern skater’s figures.

“When you’re drawing figures on the ice, tracing the lines that you make is why you do well,” Harding explained. The more secure and clean-cut a skater’s edges are, the better they score.

But very few have the opportunity to practice on black ice. Harding said sometimes skaters even use a magic marker to practice tracing their lines.

Another component of the competition asked skaters to invent their own creative figure — a drawing or shape visible from skate tracks. In her program, Cooley carved a heart-shaped cherry with a stem, now coined, the Cooley Creative Composition at World Figure Sport.

Skating in a pandemic

Back in South Burlingon, Cooley is a junior in high school and the founder of the Figure Skating Club chapter in her city, though members hail from across Chittenden County. The club has 15 members total — three from South Burlington High School, including Cooley — from a range of skill levels.

In 2019, the skaters, who compete individually and as a team, placed third in all New England. This year, the competition wasn’t necessarily canceled due to COVID, but it looks a little different. “We’ve submitted videos electronically,” explained Cooley. So far, the team is seventh in the nation.

She attended the opening of South Burlington High School’s recently installed ice rink where students and staff can move outside and socialize in a safe way. While the rink went up during her quarantine after traveling for her competition, she intends to hit the ice soon and recruit more skaters to the club.

“I love how many opportunities there are to improve,” Cooley said about why she loves figure skating. “There are so many elements to work on. When you land one jump it’s onto, ‘OK, what’s next?’”

So, what is next for the Junior World Figure and Fancy Skating Champion? She is looking forward to in-person skating events when the pandemic is over, and hopes to pass her Senior Free Skate test. Consistently landing double axel, triple salchow and triple loop jumps are also on her mind. Oh, and graduating high school.