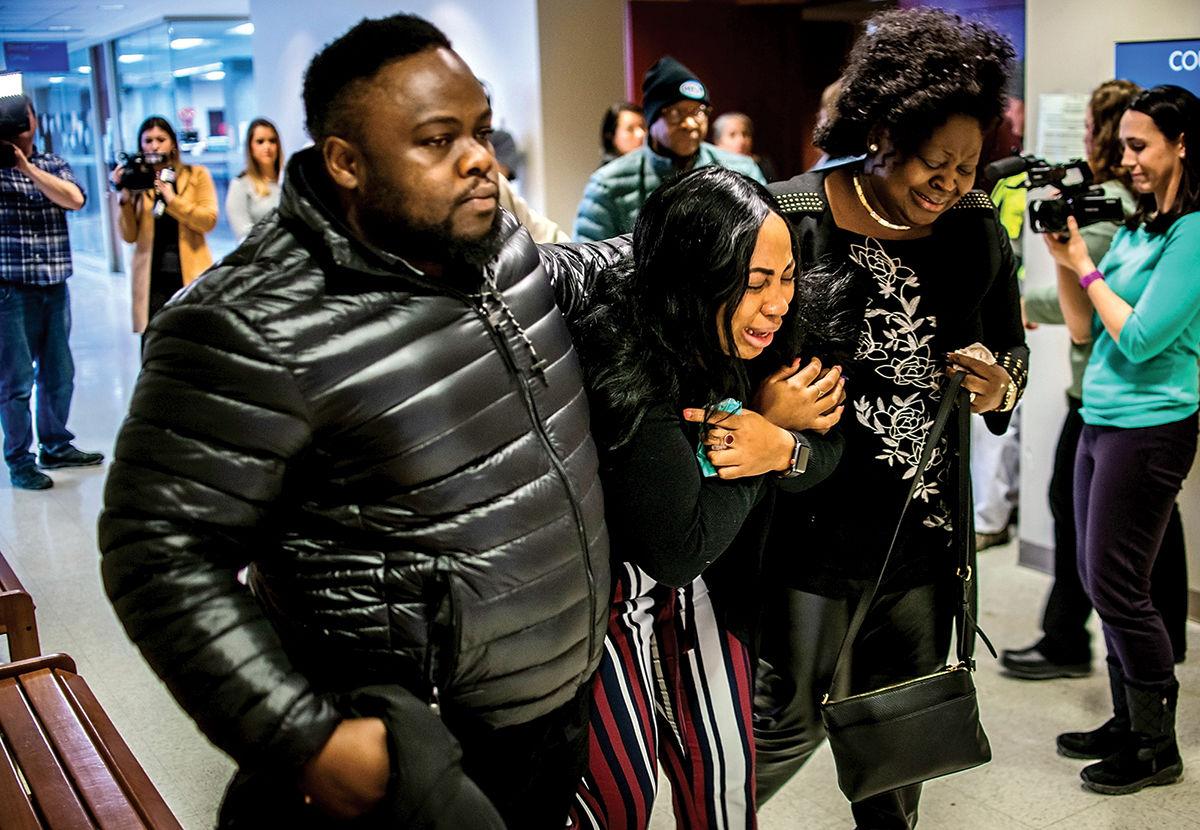 Family members of Anako Lumumba of South Burlington leave Vermont Superior Court after the arraignment of Leroy Headley on Tuesday, Feb. 18, 2020. Headley is charged with second-degree murder in the shooting death of Lumumba in 2018. 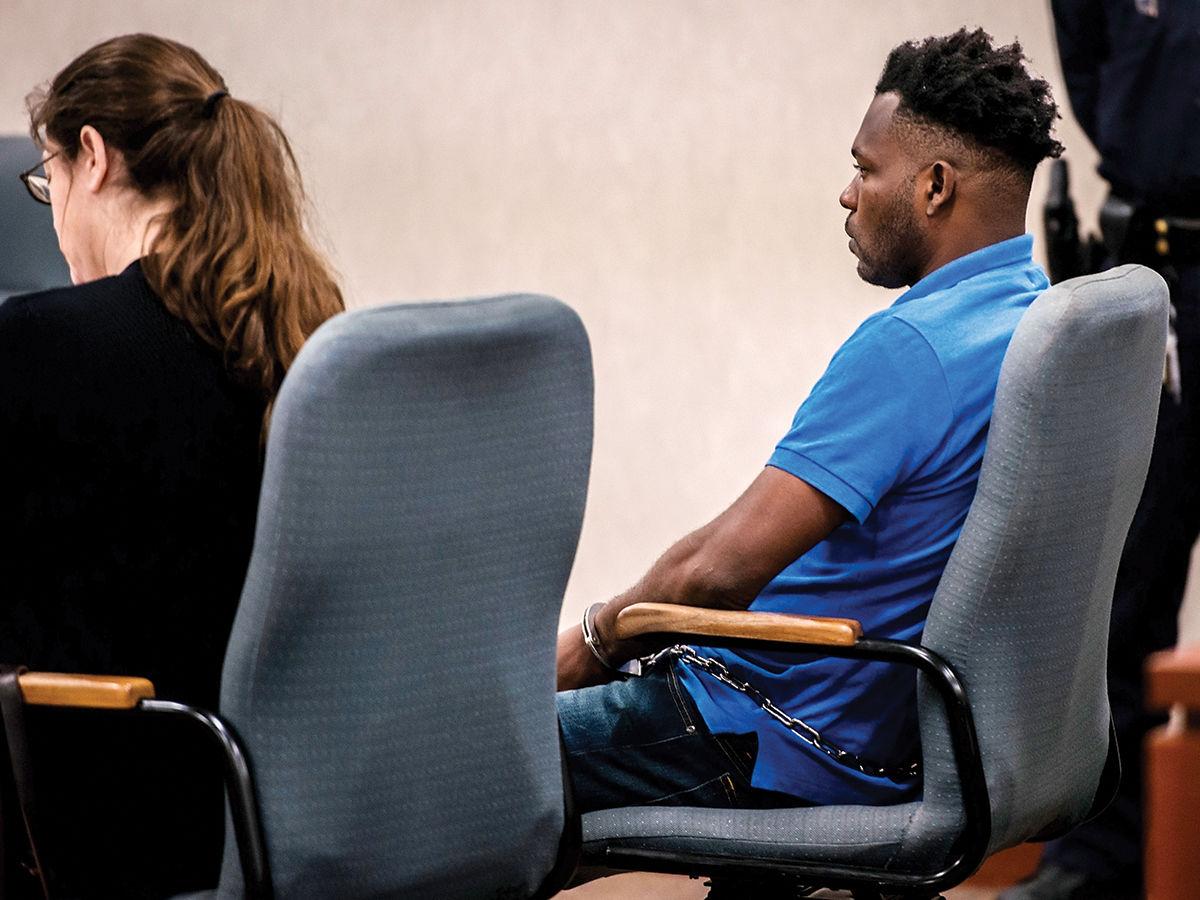 Leroy Headley appears in Vermont Superior Court in Burlington on Tuesday, Feb. 18, 2020, for his arraignment. Headley is charged with second-degree murder in the shooting death of Anako Lumumba of South Burlington in 2018.

Family members of Anako Lumumba of South Burlington leave Vermont Superior Court after the arraignment of Leroy Headley on Tuesday, Feb. 18, 2020. Headley is charged with second-degree murder in the shooting death of Lumumba in 2018.

Leroy Headley appears in Vermont Superior Court in Burlington on Tuesday, Feb. 18, 2020, for his arraignment. Headley is charged with second-degree murder in the shooting death of Anako Lumumba of South Burlington in 2018.

Leroy Headley, 38, entered his plea during an arraignment at Vermont Superior Court in Burlington.

Headley is the former intimate partner of Lumumba.

Local police and the U.S. Marshals Service have spent about two years searching for Headley following the May 3, 2018, murder of Lumumba. The U.S. Marshals service found Headley on Feb. 2 in Negril, Jamaica.

About a dozen members of Lumumba’s immediate and extended family and friends attended the arraignment. They watched with tearful eyes. Following the hearing, one member of Lumumba’s family repeatedly cried out “Why” and said, “He needs to kill me too.”

“It was emotional, that’s the reality of seeing their daughter, their sister, their cousin’s murderer in person,” said Shawn Burke the South Burlington Chief of Police. “It goes to show the number of faces that live, as survivors behind murder victims.”

Headley is now being held without bail at Northwest State Correctional Facility in St. Albans. He was ordered to not have contact with Lumumba’s family, including their two daughters, court documents say.

During the arraignment, Public Defender Sarah Reed objected to the State’s request to hold the defendant without bail.

That objection was denied.

The case is scheduled for a weight of the evidence hearing the first week of March. Headley will be represented by Jessica Brown, a public defender.

The court originally scheduled for Headley to attend the arraignment by video but changed plans on Tuesday morning. Headley was transported to the courthouse from the Chittenden Regional Correctional Facility where he had been held without bail following his extradition from Jamaica.

Burke spoke with members of Lumumba’s family and said they are going through the grief process again. He was able to answer some of the family’s questions about the criminal justice process.

“They have been nothing but completely patient and understanding with the police during this investigation,” he said. “At the end of this, nothing will ever bring their loved one back, but they will understand the steps the criminal justice system has to take in order to resolve these cases.”

Burke said he was grateful to the U.S. Marshals Service for its efforts in the case.

Attending the arraignment and seeing Lumumba’s family served as a reminder why the department “works hard on all domestic violence cases,” he added.

“The effects of this, particularly as a fatality, are simply profound,” Burke said. “I hope the system can find some form of justice for the Lumumba family.”

“I shoot my girlfriend, I love her so much”

The arraignment marks the closure of a 21-month hunt for Headley, following Lumumba’s May 3, 2018, murder.

At that time, local police officers responded to a report of a possible gunshot victim at 10 Southview Drive in South Burlington.

When officers arrived on scene, they found a woman, identified as Lumumba, deceased with what appeared to be a bullet wound in her head.

South Burlington Police were also advised Vermont’s 911 system received a call from a male who stated he had shot “her” [Lumumba].

That call was later confirmed to come from a Verizon Wireless number registered to Headley, according to a sworn account from Sgt. Chris Bataille.

A transcript from that call written into the affidavit shares how the caller repeatedly stated he shot his girlfriend.

“I’m at 10 Southview Drive, South Burlington. My name is Leroy Headley, I ... I shoot my girlfriend, I love her so much,” the transcript says. “I think she die.”

Concurrently, Officers from Falmouth, Mass. Police Department called South Burlington police. They said a man named Onel Headley had walked into their department, claiming his brother, Leroy Headley, had called and said he shot his girlfriend in the head, according to a sworn account from Bataille.

At the time of Lumumba’s murder Headley was on court ordered conditions of release, stemming from a charge of sexual assault on a minor.

The man accused of killing Anako “Annette” Lamumba in 2018 has been returned to Vermont following his arrest earlier this month.