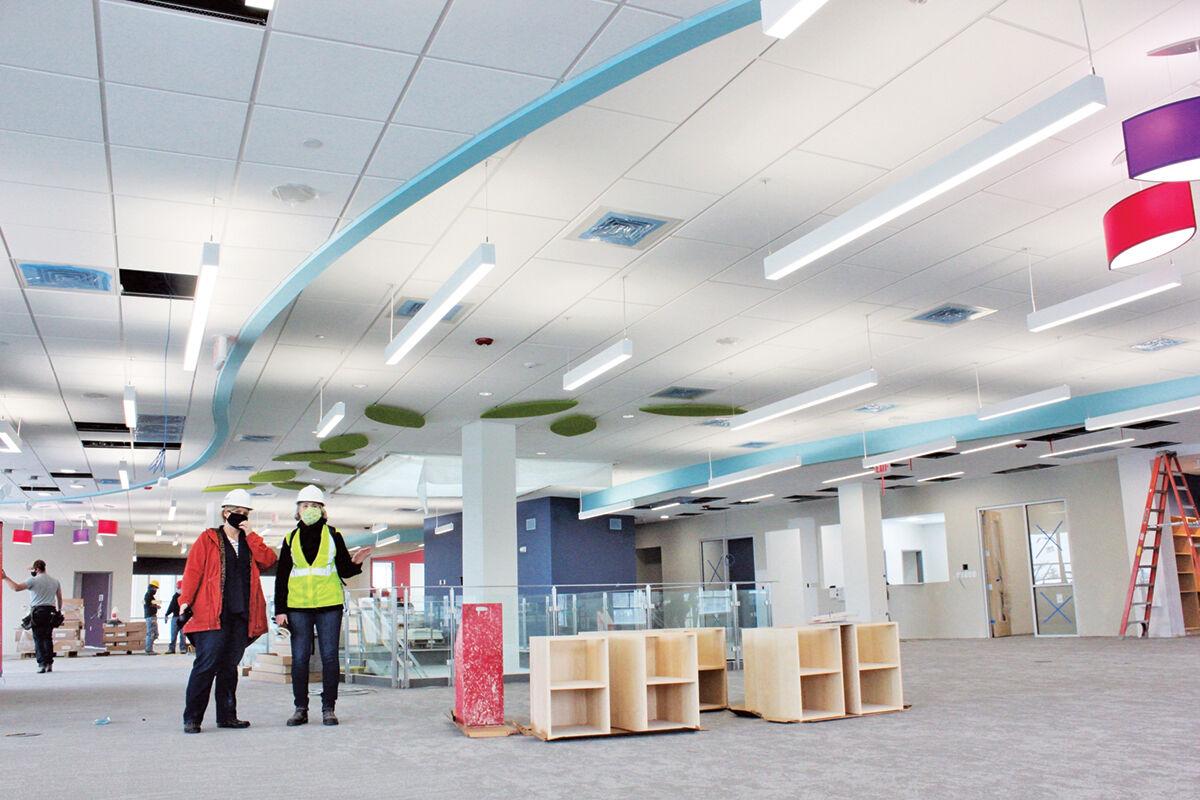 City director of innovation and communication Coralee Holm, left, and project director Ilona Blanchard, tour the in-progress building. Blanchard visits at least once a week to check in. 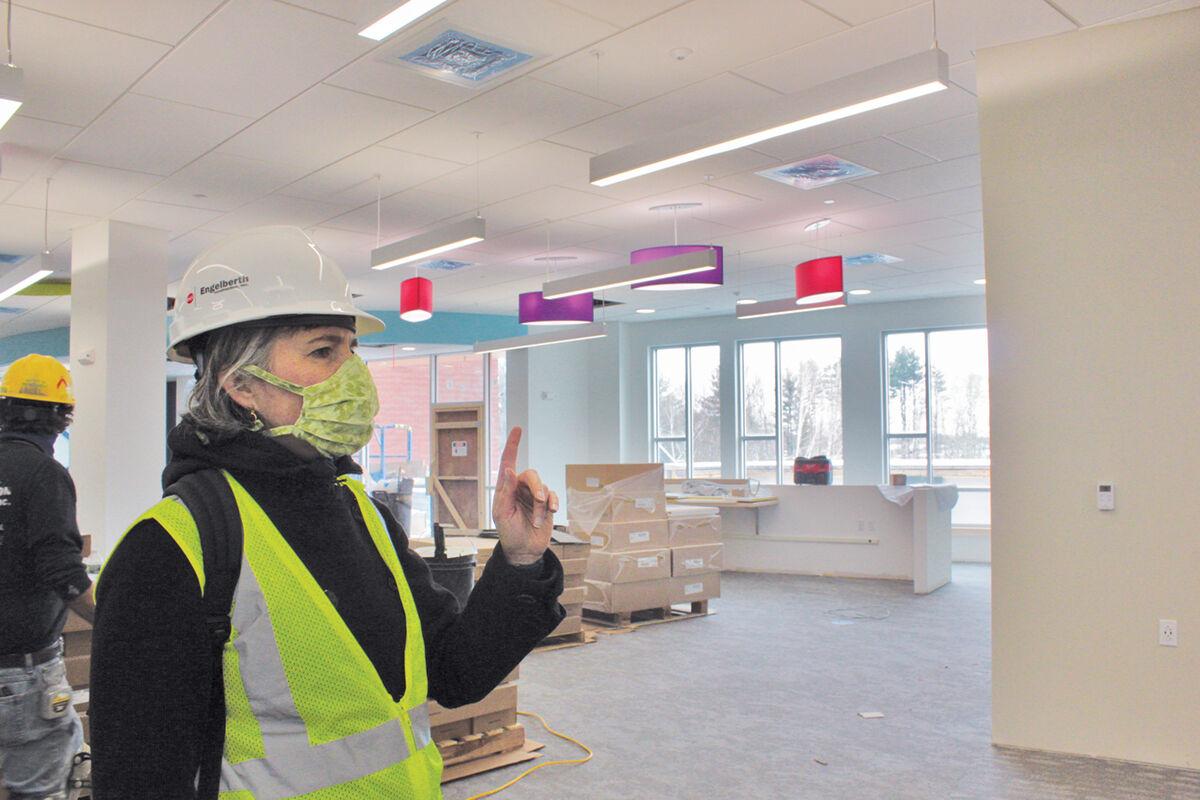 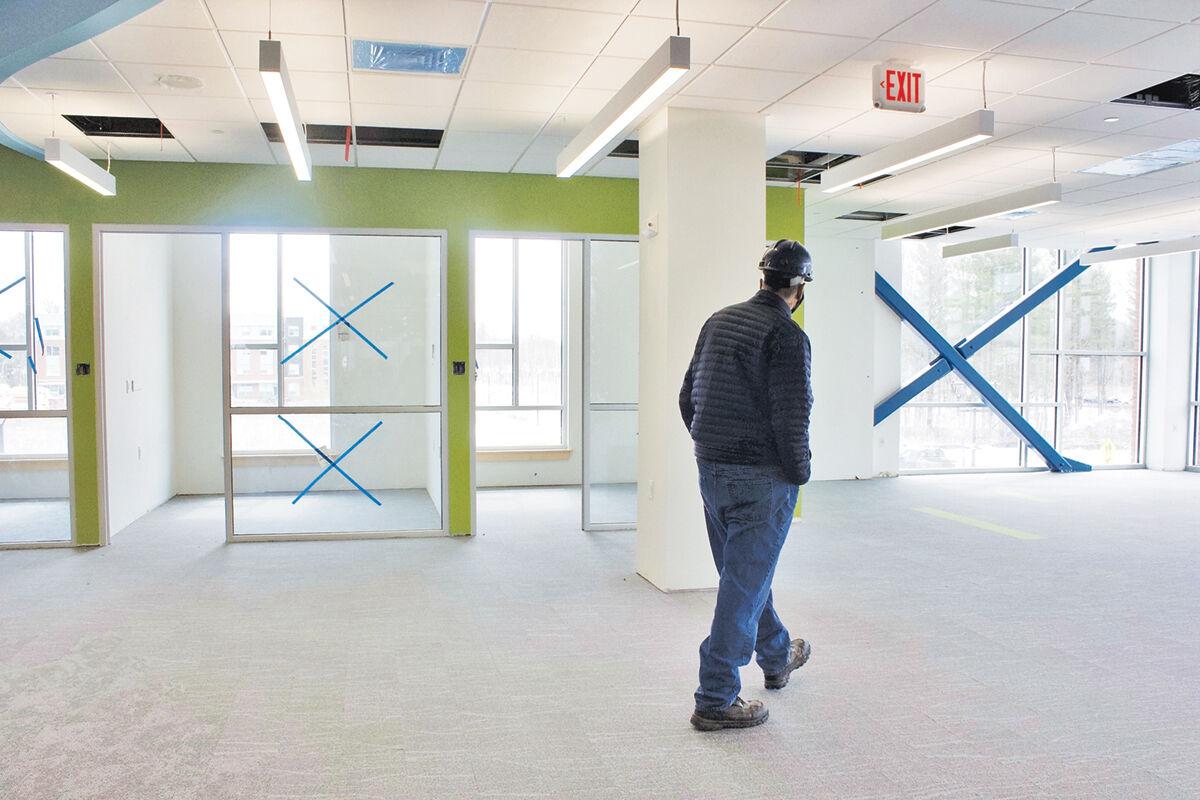 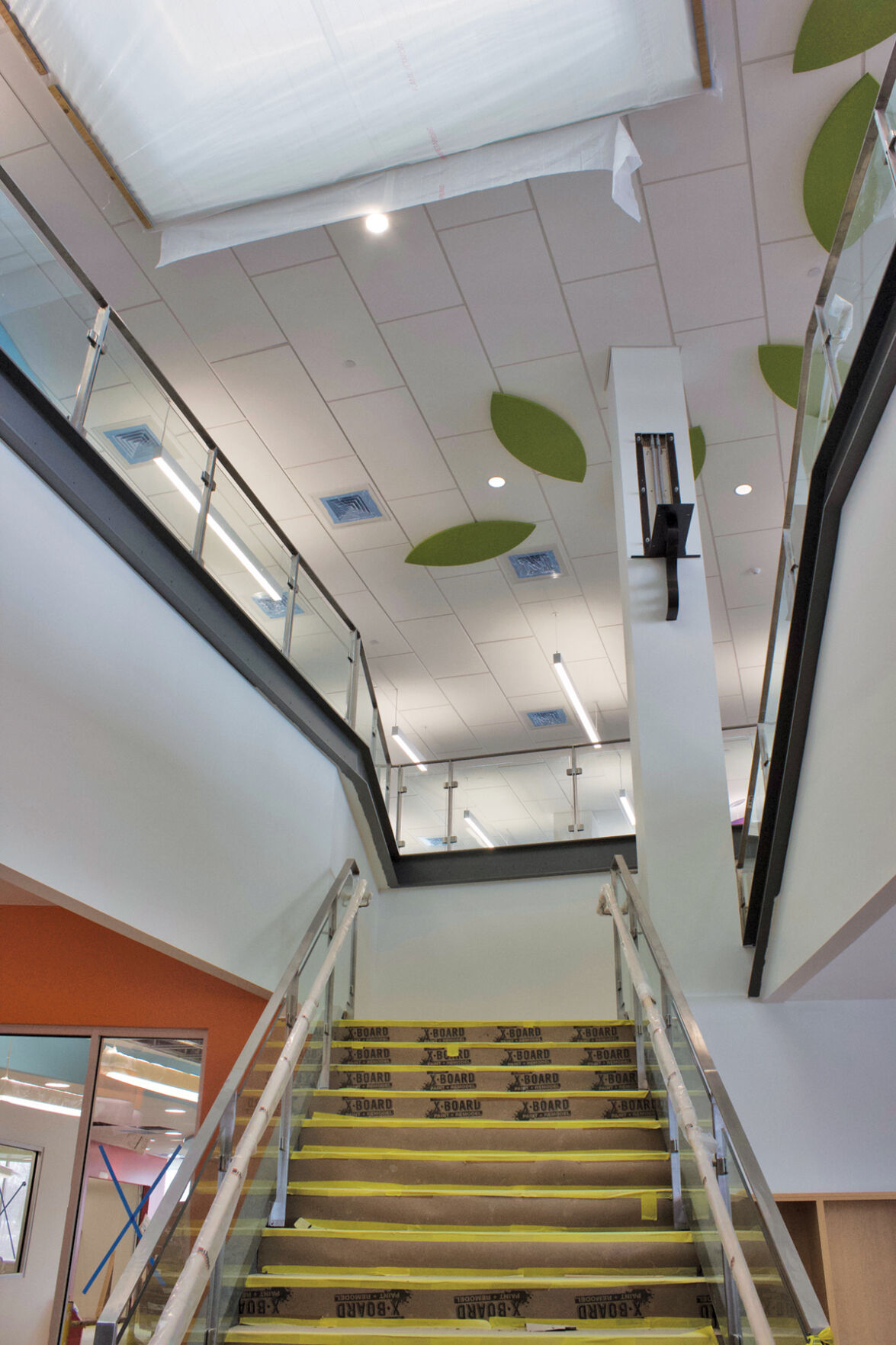 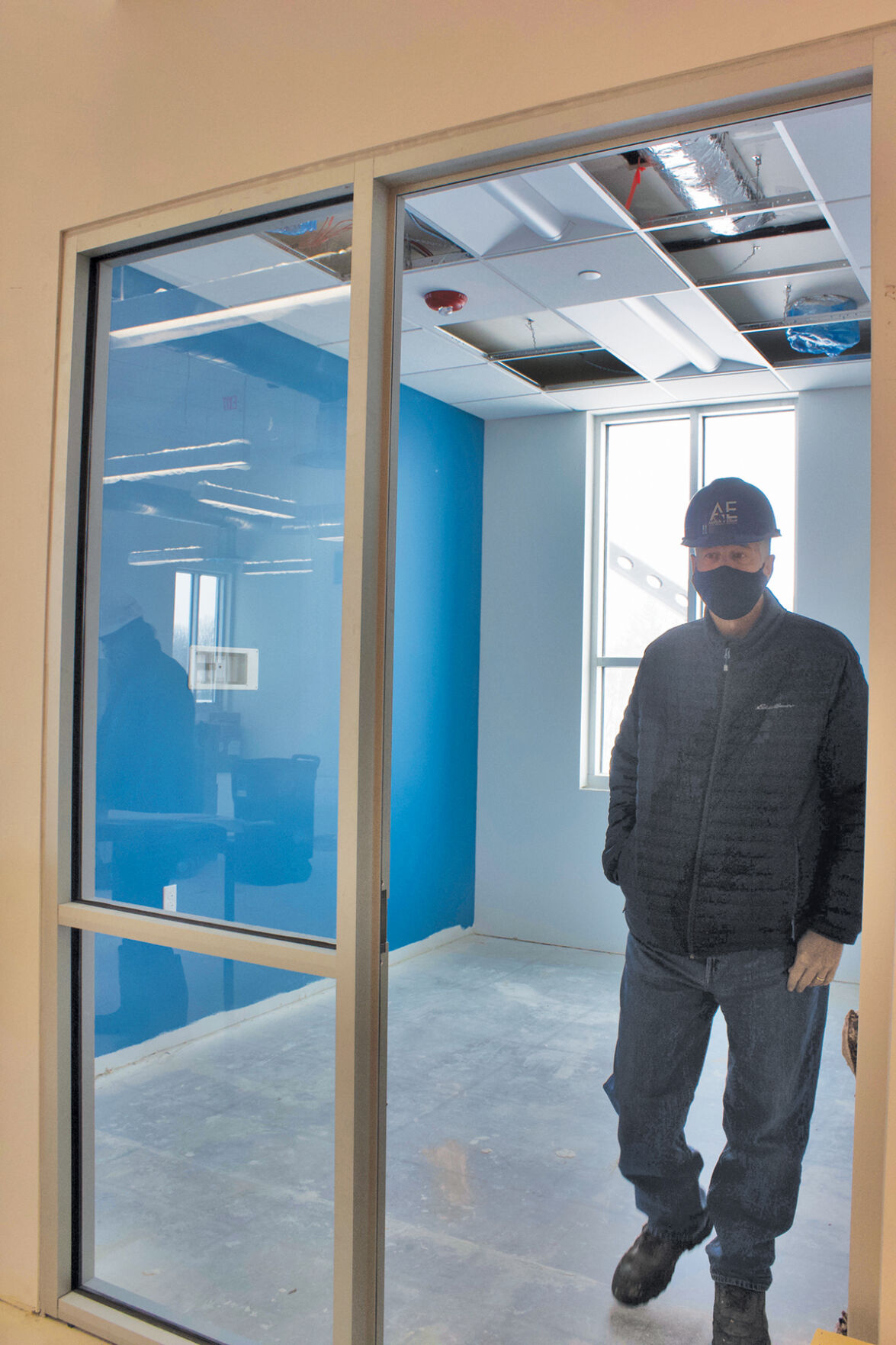 City director of innovation and communication Coralee Holm, left, and project director Ilona Blanchard, tour the in-progress building. Blanchard visits at least once a week to check in.

A large slab of plywood covers the front door of South Burlington’s new city hall building, construction for which is set to wrap up by late June — at the earliest.

The interior features white walls with light blue, green and orange accents, echoing back to the city’s logo. And if you look up from the ground floor, bright green leaves scatter across the ceiling.

City manager Kevin Dorn joined staff on a recent tour of the construction, even though he won’t be able to enjoy the new digs for long, at least not on the job.

When he retires in June, Dorn will pack up his desk at the old building and incoming city manager Jessie Baker will move her belongings into the new space.

To the right of the front door will be a welcome area, an information desk and the clerk’s office — usually one of the busiest public-facing desks in the building. An unassuming fireplace sits off to the side and around the corner is the entrance to the children’s section of the library where an enormous tree of books seems to grow out of the floor at the center of the room.

A large auditorium toward the back of the first floor is outfitted in lights, a stage and soundproofed walls. The space will be available for educational programs, speakers, music, theater and other activities, explained city project director Ilona Blanchard.

She visits the construction site at least once a week to check on progress.

Toward the back of the building near the auditorium is a catering kitchen and the senior center, outfitted in lights and large windows. A living room off to the side will be open for people to sit together, sip coffee and play games, said Blanchard.

“We have a growing senior population, but we’ve never had a dedicated place for seniors during normal business hours,” said Dorn. “This fills a huge gap in my mind.”

An L-shaped corridor on the ground floor that runs between all the spaces will be used as an art gallery, added Blanchard.

The building is outfitted with elevators to the second and third floors, staircases, handicap accessible bathrooms and showers, bicycle parking inside and outside, and geothermal heat and cooling.

Green building was important in the design, said Dorn.

“We took care of stormwater requirements for the building and the parking lots,” he said, in addition to upgrades for the school next door. “We’ll also have solar on the roof.”

The library will likely move into the space at the end of June, followed by the rest of city hall the first week in July, Dorn said. The entire second floor is dedicated to the library, with the adult and teen sections, as well as a digital lab. Study rooms are scattered throughout the library, and conference rooms of various sizes are tucked into corners in the municipal office spaces on the third floor.

Greeting visitors on the third floor is the planning and zoning department, the second busiest public-facing department, Dorn explained. The tax and assessment department will sit in the same area.

Around the corner will be the rest of city departments — recreation and parks, finance, human resources and management — styled like an open office space, instead of harsh cubicles.

“The city hall is really set up so that everything you need is right at their main door,” explained Blanchard. “The city manager’s office and planning and zoning department sort of get most of the visitors, as well as taxes.” An outdoor patio attached to a meeting room is available for employees looking for some fresh air.

Plans to have a city hall and library at the center of South Burlington go back decades, said Dorn, as far back as the 1970s.

“I mean, it’s funny because, you know, we spend a lot of time talking about little, small things,” said Blanchard — choosing the right color, the tile, the light fixtures. So, she’s excited to see it come together.

“We just don’t have places like this in South Burlington and to know that this is for the community, it’s really cool,” she said.

The South Burlington Public Library’s new space is nearing its final stages of construction, planning to open in summer of 2021.