South Burlington residents will head back to the polls next week as the school district puts a new budget proposal to a vote.

The district is proposing an about $53.7 million budget, which represents a 3.8% spending increase over the current fiscal year, and a 5.91% tax rate increase.

The proposed budget includes some “A level” reductions, which are those cuts district administrators have deemed most impactful to the student experience. The reductions would affect the middle school library support program and, at the high school: football, health, business and visual arts programming. 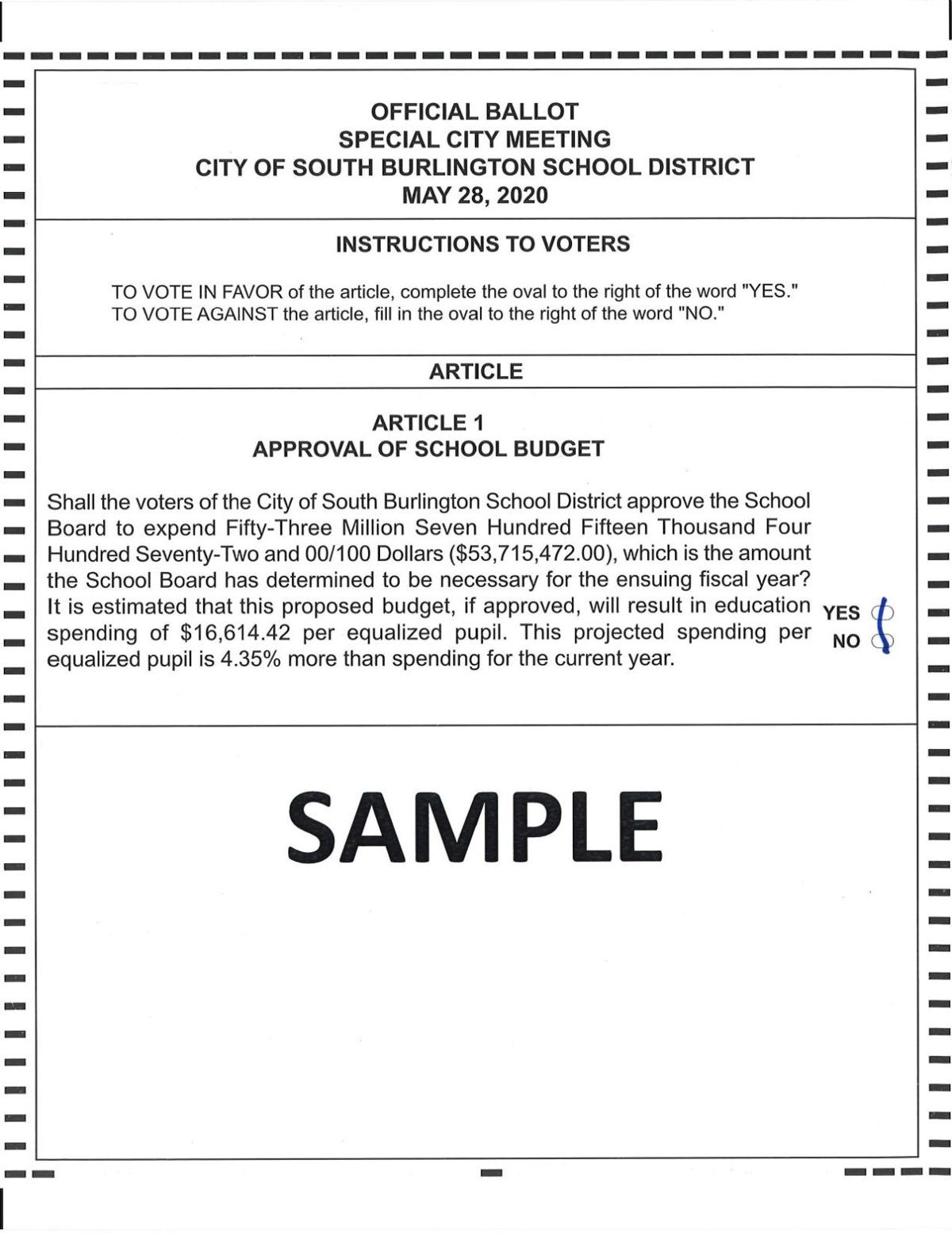 The Other Paper outlined these and other reductions in its April 9 edition. A full outline of the budget proposal is available on the district’s website.

The district arrived at its current proposal nearly two months after a Town Meeting Day defeat. Voters rejected the – then – proposed $55.9 million budget by a margin of 4,711-3,561 votes. That budget would have been a 7.96% increase over fiscal year 2020, accounting for an estimated 11.22% tax rate increase.

Though the new proposal is less of an increase, attendees at the board’s budget working sessions said the district hadn’t reduced the budget enough. Meeting attendees called for the district to be cognizant of current economic circumstances due to COVID-19. They suggested measures including level-funding, or for the board to negotiate a salary freeze with its three collective bargaining units.

“If people couldn’t afford [an increase] before, they certainly can’t afford it now,” community member Annie Leupp said in March.

On the SBVT Community Watch Facebook page, opinions have been shared both for and against the proposed budget.

On Town Meeting Day, voters were also presented with a $209.6 million bond proposal to fund a new middle/high school and athletic complex. The proposal was the result of the district’s multi-year Master Planning and Visioning study.

District officials have said that those schools are pushing student capacity levels, have aging heating and cooling, plumbing and electrical systems and accessibility issues for handicapped students, among other problems.

Superintendent David Young said that while he and the school board have paused that conversation during COVID-19, the needs still exist.

“All of the facility issues and needs have not gone away, and yes we are going to have to revisit our current realities,” he said.

As of press deadline, the vote was warned to happen between 7 a.m.-7 p.m. at the city’s three usual polling places. The Board of Civil Authority had up until one week before the vote to alter protocol such as decreasing to one polling place or conducting a drive-through vote.

The city and district encouraged those voters who could cast an absentee ballot to do so. Voters can drop those ballots off in the city hall drop box, or return them by mail, said City Clerk Donna Kinville.

Around the nation, states hosting primary elections and looking towards the November presidential election have expressed some concern about mail-in ballots. Concerns include voter fraud such as casting more than one ballot or voting in another person’s place.

“Unfortunately, there’s little we can do to alleviate anybody’s concerns about that,” Kinville said.

The election workers make sure to only count one vote per person; should two come in they typically take the oldest of the two ballots, she said. Likewise, voter signatures can be compared to those on file. But with some 2,200 mail-in ballots there’s not a great chance the election workers can check to see if, for example, all signatures in a family look like they were signed by the same person, Kinville said.

The Secretary of State’s Office has not trained South Burlington election workers on how to detect voter fraud, Kinville said – it’s something you notice as you’re working.

“We do the best that we can and if we happen to notice something, we’ll try to do what we can,” she said, adding local law enforcement follows up with any prosecution measures.

But, Kinville added, voter fraud can happen at the physical polling locations too.

Unlike a normal election, Kinville believes the city will not be able to conduct early voting inside City Hall. The City Clerk’s Office, along with City Hall, have been closed to the public since mid-March.

The clerk’s office normally employs three full-time workers and one part-time assistant. But in April, three of those employees were furloughed.

“It’s a lot being in here all by yourself, all day getting all these requests and phone calls,” Kinville said. “It’s wearing.”

Recently she has been able to call in a worker to help for about 15 hours per week. Kinville anticipated she would need to call in additional hours this week as more ballots are returned to the city.

With limited staffing, Kinville is encouraging residents who wish to vote absentee to request a mail-in ballot via the Vermont “My Voter Page” website. If they are unable to request a ballot there, she recommends sending an email to the clerk’s office. As a last resort, residents can call the office with questions.

As for in-person voting, Kinville said the city is taking precautions to help lessen the risk of spreading COVID-19. Election workers will have masks, the polling places will be sanitized and the normal four-person voting stations will be blocked off to allow one voter per station for adequate social distancing, among other measures.

The voting process may slow down at times due to the changes, but Kinville anticipates there won’t be a large in-person voter turnout with so many people casting absentee ballots.

“I love election day, I love the feel of it, I love the vibe, the hum in the air,” Kinville said. “I don’t know how this experience is going to change that for some people.”

Alongside budget discussions has been talk of the district’s negotiations with its three collective bargaining units.