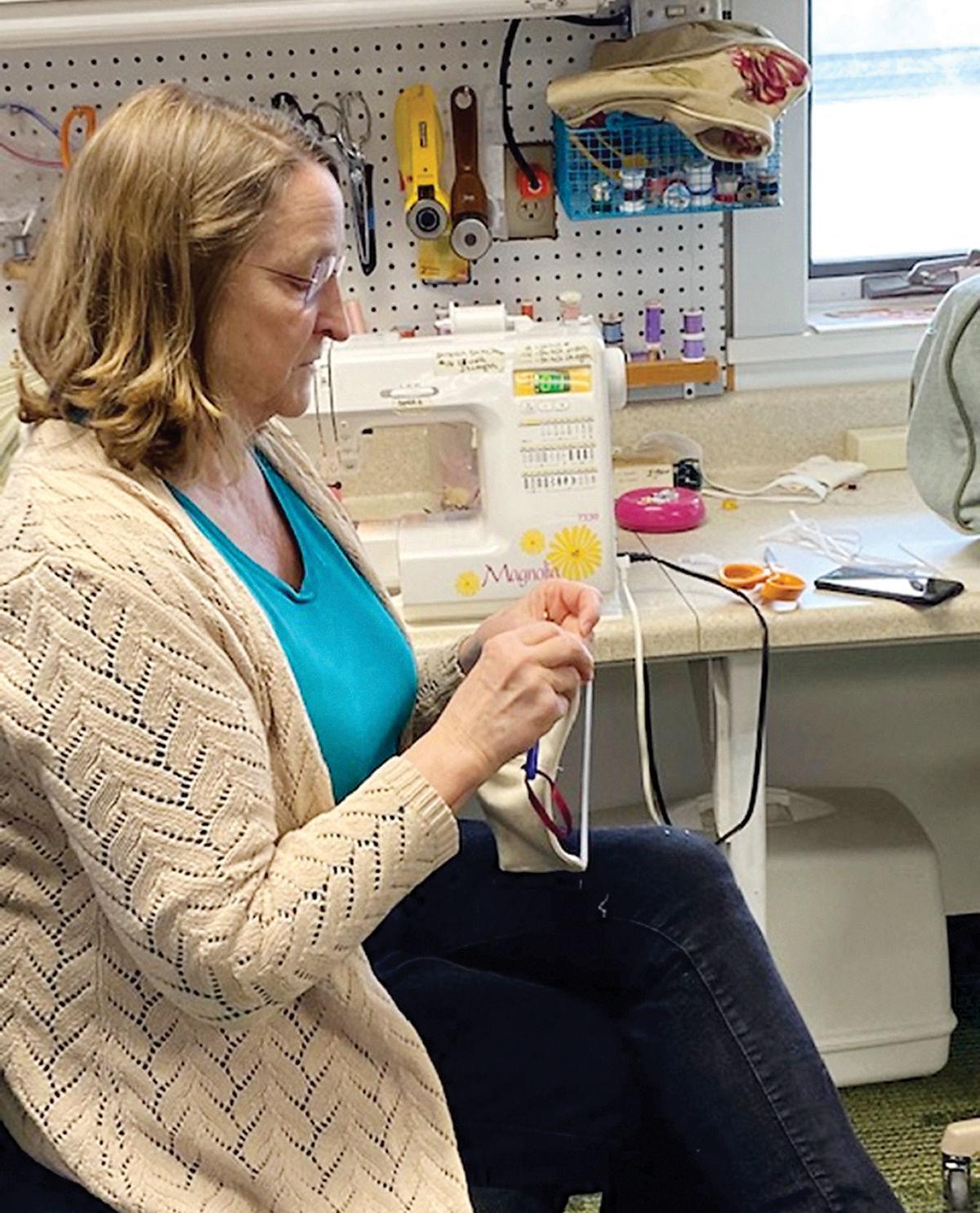 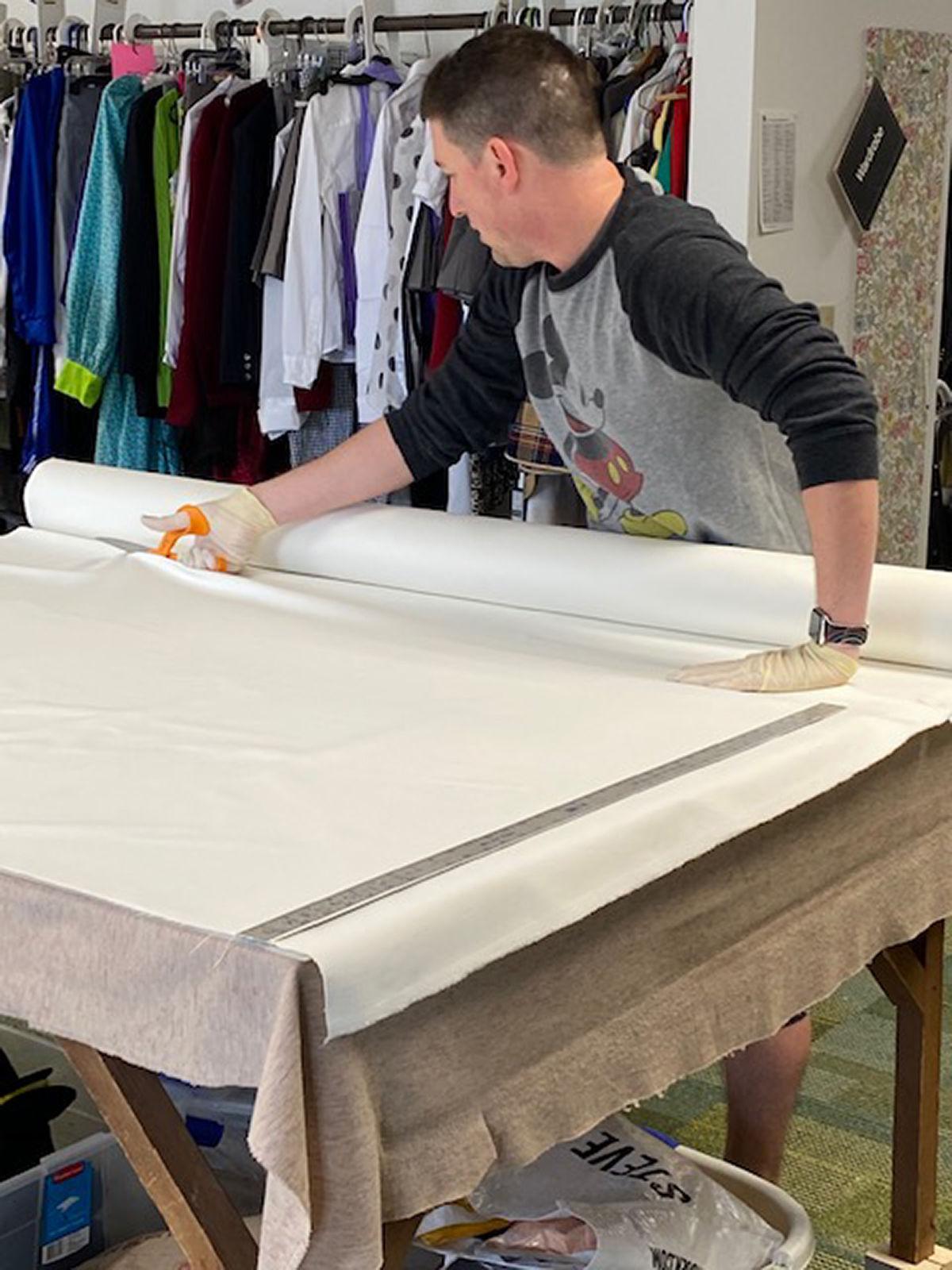 Lyric Theatre’s board chair, Chris Brown, helps cut out fabric for the kits.

Lyric Theatre’s board chair, Chris Brown, helps cut out fabric for the kits.

Kerry Farrell, costume designer at South Burlington’s Lyric Theatre, was putting the finishing touches on costumes for “Matilda” when COVID-19 began to spread around the state.

“We were getting pretty close; we probably had about a month left,” she said. “We were very confident in where we were at as far as the costumes.”

So confident, Farrell and volunteers on the project had cancelled some costume shop sessions. But as the threat of the virus drew nearer, the theater postponed the performance from April to July.

Despite a homebound cast and a darkened stage, Lyric and its volunteers have taken up a new production: making fabric surgical masks for Burlington’s essential workers.

Farrell knows a thing or two about medical needs, as a nurse herself at Chamberlin School who has past experience working in hospitals.

The hope is to keep those who must report to work safe from contracting or potentially spreading COVID-19.

While the masks aren’t a replacement for the N-95 surgical masks used by medical professionals, they can help someone avoid touching their nose and mouth and can contain droplets to prevent spread.

The masks are not a replacement, either, for following social distancing, hand washing and other health guidelines.

“Right now, Lyric is just one small part of this,” Evarts said. “This is a huge effort across the greater Chittenden County area, and we’re just so humbled to be a part of it.”

While Burlington is funding the effort, many local businesses have lent a hand.

South Burlington’s Rags & Riches Fabric sold the city fabric at a discounted rate, Healthy Living donated bags for the mask kits and Gadue’s Dry Cleaning will sterilize the masks, at a discounted rate, before sending them to the hospital, said Gene Richards, Burlington International Airport Director and one of the effort’s coordinators.

With her new mission at hand, Farrell set out to create a pattern following one provided by the Chief Medical Officer of the Lahey Clinic in Massachusetts – working independently of the clinic.

The pattern is basic, but the thickness of the fabric can make it difficult for some sewing machines, Farrell said.

And while some might look at the bull denim and question its breathability Farrell said it is breathable. She tried on one of the masks while sewing some more.

“I think people who are not used to wearing it might say, ‘Oh, you can’t breathe in it,’” she said. “But in a patient’s room, you’re covered in protective equipment. It’s not comfortable.”

Farrell and Evarts prepared kits with enough material for 15 masks per maker. Volunteers were invited to collect kits from the theater at a set time.

Evarts asked that all masks be returned to the theater, ideally within a week. The initiative soon grew from Lyric’s sewing volunteers to nearby people, churches, and organizations. One such group was the Milton Artists’ Guild.

“You think about what people have done in the past when they’ve been called into service, and this seems like something rather small,” Evarts said. “When it comes to sewing masks, that’s something that Lyric can do. We have the time on our hands, because we did have to postpone our show, that feels like the right thing.”

During a press conference on April 1, Stephen Leffler, president and chief operating officer of the University of Vermont Medical Center, said the hospital was in “good shape” with its protective equipment supply.

Burlington began the mask making effort with an “eye toward building up a local reserve that could potentially benefit UVMMC,” according to Burlington Chief Innovation Officer Brian Lowe. With the medical center currently in good supply, the city will focus on providing masks to essential workers.

For Farrell, the mask-making experience hits close to home.

“It’s kind of a surreal thing that we’re sewing masks when I worked in hospitals with plenty of them; running out of PPE was never an issue. It’s just kind of a weird thing to think, oh, here we are making material masks to be used because they might run out.”

But she added it feels good to help others while stuck at home.

The show will go on

As for “Matilda,” bustling evenings spent rehearsing have given way to quiet nights.

The theater is committed to keeping the Lyric volunteers safe, Evarts said. The cast has been asked to stay home and rehearse independently. But they will join forces again, once it’s safe to do so.

“I’m looking forward to getting back to a sense of normalcy for Lyric, and a normalcy at Lyric is always a little crazy,” Evarts said.

There will be costume work to do once it’s safe to gather again. The cast includes several kids, and Farrell says they’ll likely have grown in the interim period.

“When we return, you know, we won’t feel as confident as we were feeling because we have to try everything back on everyone,” she said. “There’s definitely going to be challenges when we all get back together again. That’s nothing we can’t handle.”

Indeed, the theme of “Matilda” is of perseverance.

“Right now, we don’t want anybody to stand up. But when it’s clear ... we hope that people come out and really celebrate with us,” she continued.

Not all heroes wear capes.