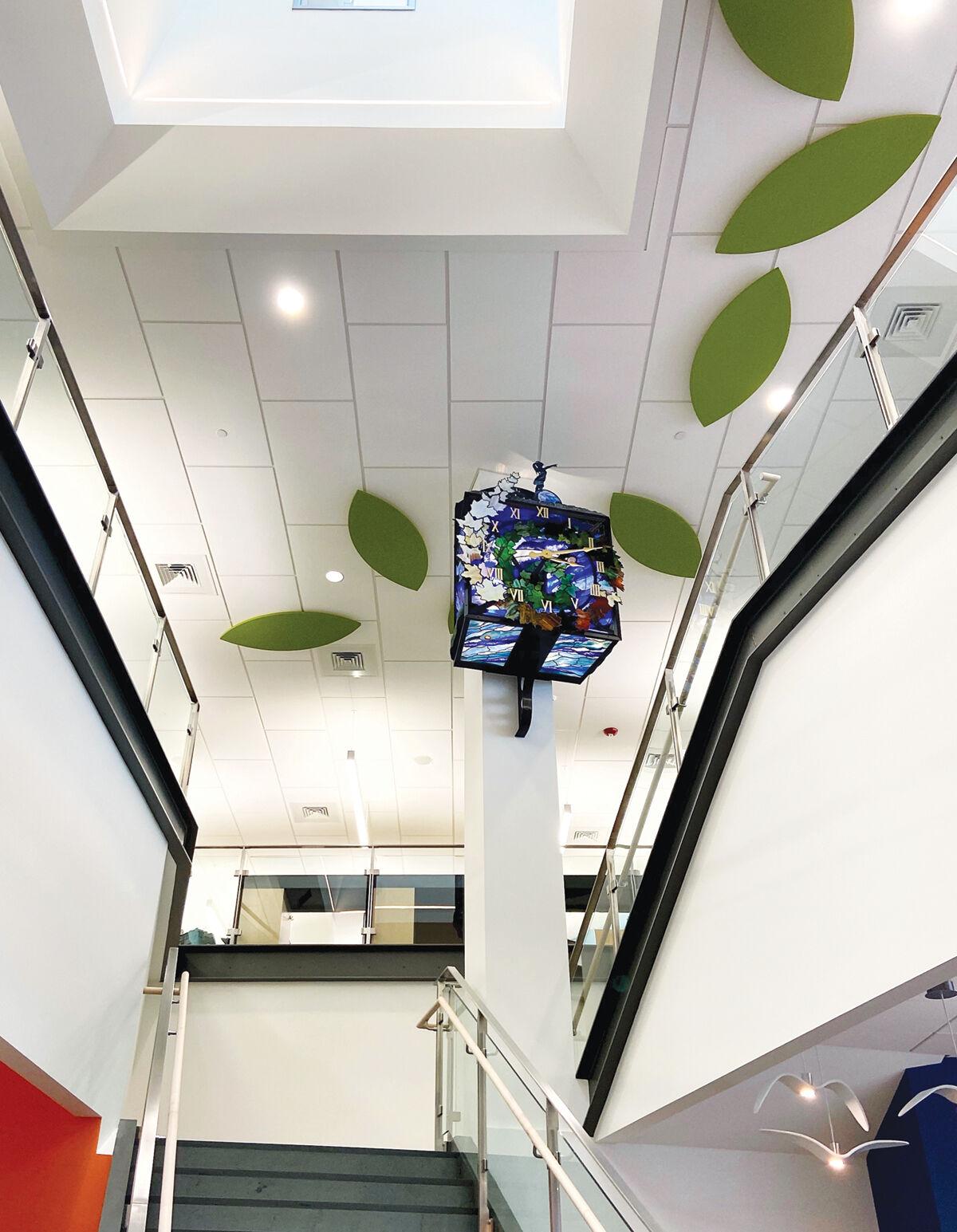 The clock in its permanent home at the new city library. 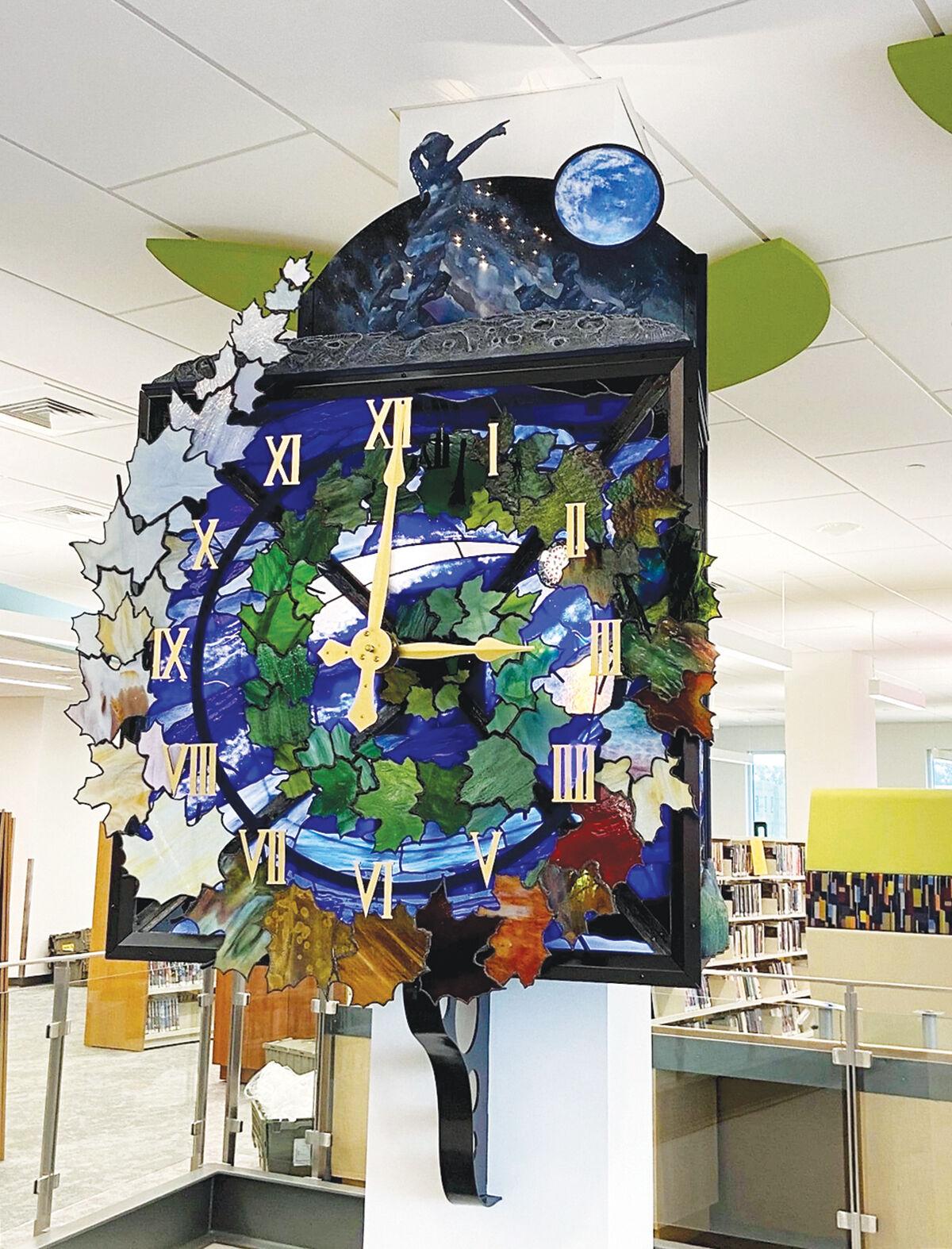 The six-foot-tall glass clock took Vermont artist Phil Godenschwager about 16 months to complete — much longer than he’d intended. Many elements on the face reference Vermont, including silhouettes of Camel’s Hump and Mount Mansfield. 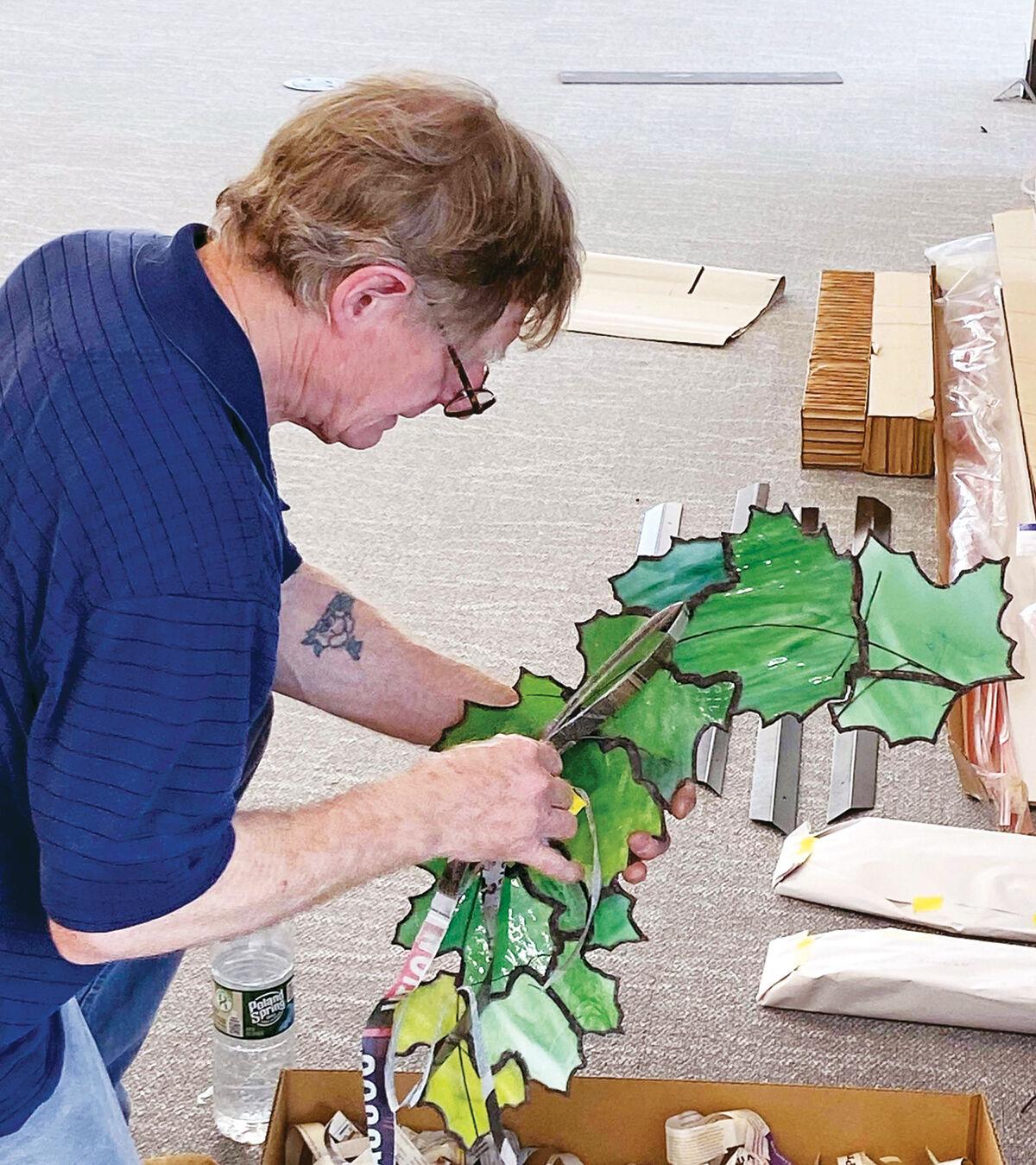 Artist Phil Godenschwager meticulously assembles glass maple leaves, which change from green to red to snow-white to represent the seasons.

The clock in its permanent home at the new city library.

The six-foot-tall glass clock took Vermont artist Phil Godenschwager about 16 months to complete — much longer than he’d intended. Many elements on the face reference Vermont, including silhouettes of Camel’s Hump and Mount Mansfield.

Artist Phil Godenschwager meticulously assembles glass maple leaves, which change from green to red to snow-white to represent the seasons.

A six-foot-tall glass clock — face swirling with maple leaves, stars and mountains — overlooks the top of the staircase in the new South Burlington Public Library. Commissioned by the public art selection committee, the clock tells more than just the time. It also tells the story of Vermont, of the South Burlington community and of the last year and a half when time seemed to both stop and whiz past.

The public art selection committee put out a call for submissions in 2018, receiving 24 ideas from artists all over the country.

“It being city hall, as well as a library, one of the first things that came to my mind was, well, city hall needs a clock,” said Phil Godenschwager, the Randolph-based artist whose idea won over the committee.

But like the 40-something years it’s taken to plan, build and complete City Center on Market Street where the library is housed, the clock took a little longer than intended.

Instead of finishing the public art piece in six months as planned, the project lasted well over a year, Godenschwager said. The state locked down for COVID-19 the same week he was set to start fabrication and all of his glass suppliers on the East Coast shuttered their doors. Bad news for a clock largely composed of glass.

After 16 months of meticulous tinkering, the clock is finished. It stands at 6 feet tall, about 40 inches across the face, with an overall depth of 30 inches. Green, red and snow-white maple leaves encircle the hours, while above, children are depicted reading books and gazing at the starry sky. Silhouettes of Camels Hump and Mount Mansfield, as well as specific constellations and even a “Covid Comet” can be seen.

The art selection committee called for elements that would exude a sense of place and relate to the use of the building. Godenschwager also found himself inspired by 18th and 19th century German, Austrian and French architectural clocks.

“That’s kind of where I got my idea to do something that was unusual and colorful, monumental,” he said.

“It all kind of happily married what I put in there. That was a happy accident,” Godenschwager said, pointing to the library’s blue and green color palette, light fixtures resembling seagulls, leaves scattered across the ceiling, and a tree of books seemingly growing out of the first floor.

Art selection committee chair Trice Stratmann described the clock as “symbiotic” with the environment of the library.

“When the clock went in, it was like, ‘Oh my god, it all pulls it together, with the leaves and the playfulness and the colors. It was like, wow, this is perfect,” she said.

She and fellow committee members are ecstatic for the community to see the finished work, especially at Friday’s grand opening of City Center, which houses the library, city offices, the Kevin L. Dorn Senior Center and the public art gallery. Festivities kick off at 4:30 p.m. tomorrow, July 23, at its 180 Market St. location.

The clock is the first of many art pieces the committee hopes to show in the new art gallery, she added. While the clock won’t leave its home above the staircase, Stratmann expects the gallery to host three to four rotating exhibits every year by local artists, South Burlington schools and other community groups.

“It’s all just been done so beautifully and something to really be proud of as a community,” Stratmann said.

Join neighbors, city councilors and other officials at 180 Market Street Friday for the grand opening of City Center, at the heart of South Burlington.

Market Street between Mary Street and the entrance to Rick Marcotte Central school will be blocked off for the party.

• Official Remarks start at 4:30 p.m. City Council Chair Helen Riehle will lead the list of speakers which will include federal and state legislators, among other key guests.

• There is plenty of parking in the area. Bike parking will also be available.