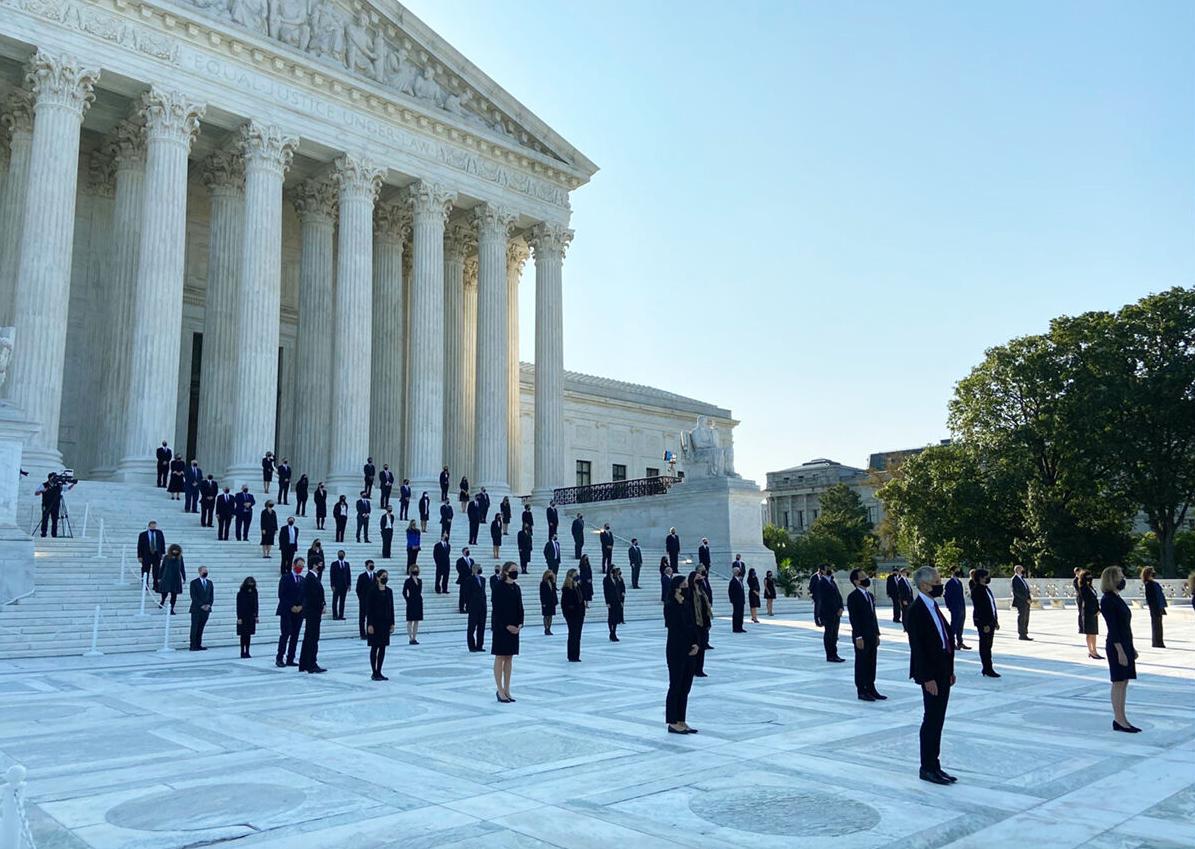 Becca Lee stands second from the right in the column closest to the camera on the steps of the Supreme Court. She is surrounded by fellow clerks of Justice Ruth Bader Ginsburg who are there to witness Ginsburg laying in repose at the court. 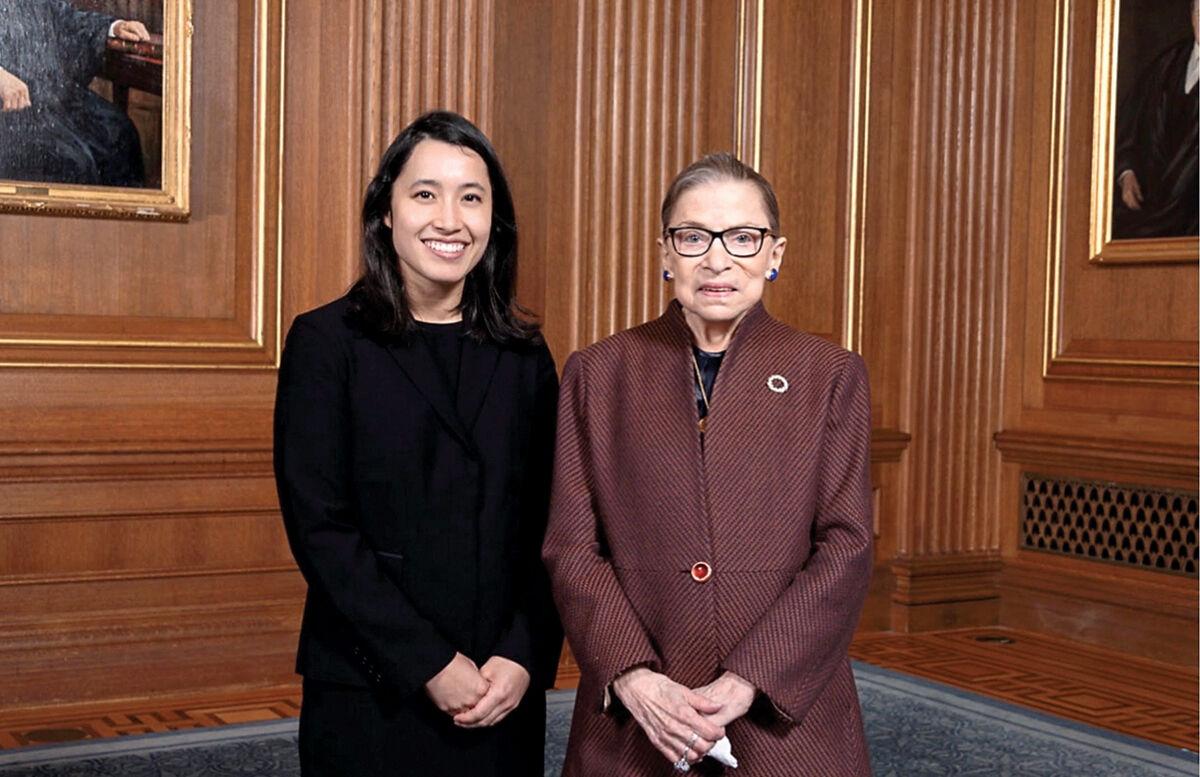 Becca Lee poses for her official portrait with Justice Ruth Bader Ginsburg in 2018.

Becca Lee stands second from the right in the column closest to the camera on the steps of the Supreme Court. She is surrounded by fellow clerks of Justice Ruth Bader Ginsburg who are there to witness Ginsburg laying in repose at the court.

Becca Lee poses for her official portrait with Justice Ruth Bader Ginsburg in 2018.

Becca Lee kept vigil through the silence of the night. She watched as Ruth Bader Ginsburg, her former boss, lay in repose in the U.S. Supreme Court.

She saw the smooth and tightly folded American flag covering Ginsburg’s casket and the sleek marble that lines the Great Hall.

Sitting with Ginsburg one last time, in the silent stillness of 2 a.m., was fitting. Ginsburg was a night owl.

Back then it wasn’t unusual for the justice to call Lee and the other clerks at 10 p.m., asking them to head to her chambers to discuss a case.

They willingly obliged. There was much to be learned from Ginsburg. Perhaps not so much in advice formally imparted, as in the justice’s words, deeds and actions, Lee recalled.

“She was a singular person, and I will never ever meet someone like that again,” Lee said.

As she sat vigil, Lee reflected on the “superhuman” of a woman Ginsburg had been.

Lee attended South Burlington High School from 2004-2008. At that time, the most lawyer-like thing she did was compete on the school’s debate team, founded during her junior year. She loved the experience and was good at it, too — in her first year the team made the state championships. In her second, they won.

While being a lawyer wasn’t on her radar initially, all the ingredients were there, including a fascination with government and with tools for social change.

Upon graduating from South Burlington, she studied public policy at Princeton University, where she honed in on her desire to become a lawyer. After that, it was off to Yale Law School and eventually Lee began clerking.

Clerks assist judges with all aspects of their jobs — like helping prepare oral arguments and drafting opinions. Lee started as a clerk in the court of appeals, later clerking for the district court in D.C. She then applied for a clerkship at the Supreme Court — where it’s customary to apply for clerkships with all of the justices.

When she landed an interview with Ginsburg she was awestruck.

“I remember that moment so vividly because it was this flood of emotions. On the one hand I was like, ‘Oh my gosh, I’m going to get to meet my hero. I’m actually going to meet Ruth Bader Ginsburg, and this is mind blowing,’” she said. “And then at the same time, I shortly thought, ‘Oh my gosh, I need to get ready.’”

Although she walked into the interview nervous, her nerves evaporated as she sat down with the justice. It was the power of Ginsburg, a small, quiet woman who managed to make others feel at ease.

“She was a very reserved person and very much an introvert, but at the same time I think that one thing that a lot of people don’t know about her is that she has this incredibly deep warmth,” Lee said.

As the two spoke, Lee thought to herself that even if she didn’t get the position, it was incredible to spend 30 minutes with Ginsburg.

But she will never forget what happened next.

M&Ms in the Opera, and other memories

The work was serious, but it wasn’t without its lighter moments.

Each year, Ginsburg would take her clerks out for a night of opera at the Kennedy Center.

“Everyone recognized her when she came in, and so it was like being in a celebrity’s entourage,” Lee said.

The group filed into their seats, Lee sitting just two or three down from Ginsburg.

Lee trained her eyes on the show, wanting to try and follow along and soak up the experience.

That is, until she heard a rustling. She looked around, and not seeing anything, was satisfied that perhaps she hadn’t heard anything at all. Minutes later, the rustling returned.

“I looked over and I saw the justice. She had a yellow sleeve of Peanut M&Ms, and was like slowly dipping her hand in, and then she would take one single Peanut M&M and then slowly bring it to her mouth, and silently try to eat it,” Lee said. “I just loved that. I guess, when you’re RBG you can eat M&Ms in the opera.”

At the end of Lee’s clerkship, she met with Ginsburg for a final review and parting words. After Ginsburg thanked her for her work, she spread her arms out wide into a “T” shape.

“I was like, ‘Oh my gosh, I think she’s opening up her arms for a hug,” Lee said. But she could immediately see a dilemma, though she isn’t very tall, the justice was far smaller. Lee figured she’d hug with her arms on top. But as Ginsburg approached it became apparent that wouldn’t be the case — Lee crouched down so that Ginsburg could have her arms on top.

As Lee left, she excitedly shared what had occurred with Ginsburg’s assistant.

“I was like, ‘Oh my gosh, the justice just hugged me’ and she was like, ‘Yeah, did she go over?’ and I was like ‘Yes.’ She said that the justice always hugs on top,” Lee said.

When Lee heard Ginsburg had died, she was away from her home in Washington, D.C., visiting her parents in Vermont.

That night, she made her way to Five Tree Hill overlook in Williston, scrambling up the hill by the dim light of her cellphone. She sat, quietly contemplating the loss of a hero and wondered what would come next.

“There’s this picture of her as like a brilliant legal mind and precise writer and a feminist icon, and all those things are true,” Lee said. “To that picture I would add that she didn’t view law as some kind of dusty, abstract principles. She was always aware and thinking about the effect the court’s work had on real people.”

After spending time to reflect, Lee said the next step will have to include others picking up the baton.

“She gave us so much of her life and many, many millions of Americans’ lives are different because of what she was able to accomplish and her ability to translate her vision of justice into a reality,” Lee said.

“The justice was superhuman, she was unflappable, and I think that she had just this deep abiding faith in the American people that things would get better. And so, when I start to become anxious it really is like, ‘What would RBG do?’”

It’s a standard and commitment that’s something to aspire to, Lee said.

Back in the courthouse, Lee’s 20-minute vigil came to an end. She and her fellow clerk stood, silently, and walked out of the hall, passing the next two on their way in.

The early morning air greeted her as she left the courthouse.

The late Supreme Court Justice Ruth Bader Ginsburg, who died Sept. 18, was honored in Shelburne with a candlelight vigil the next day. The gre…