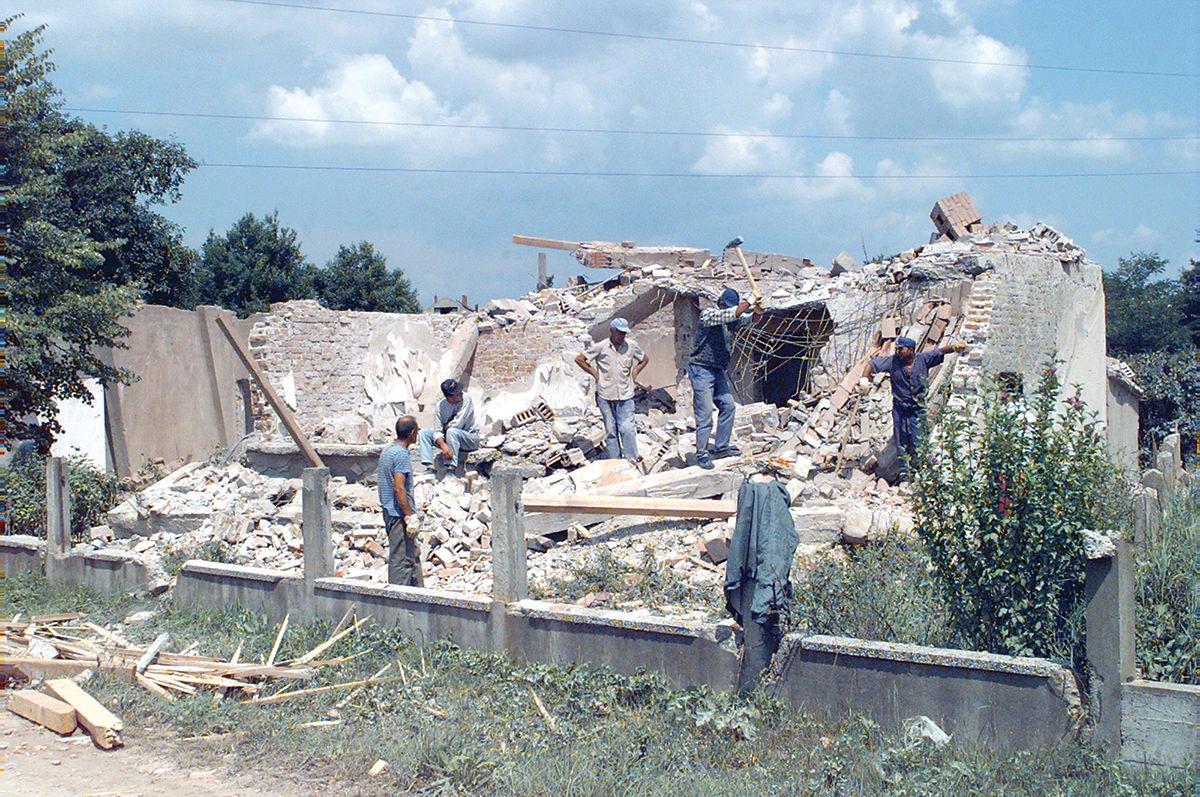 A Muslim home destroyed by Serbian militants during the Bosnian War. 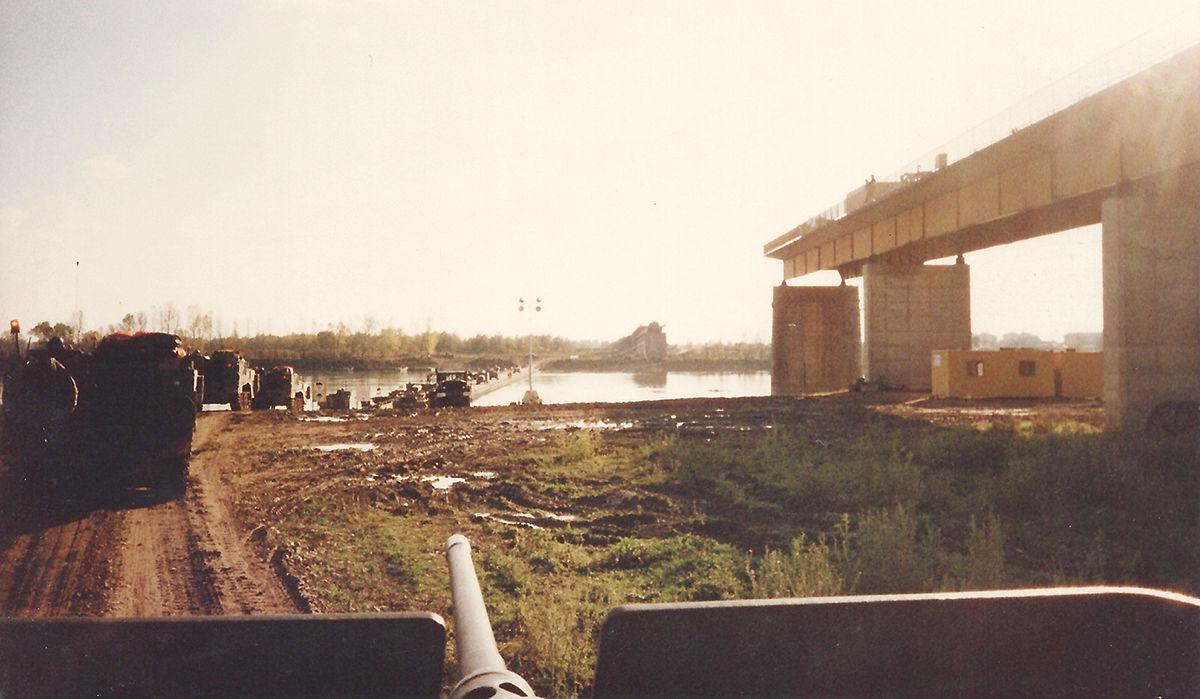 A convoy of vehicles from the 9th Engineer Battalion crosses the Sava River into Bosnia in support of Operation Joint Endeavor, a NATO-led multinational peace enforcement force in Bosnia and Herzegovina (1995-96). The elevated bridge between Bosnia and Croatia still shows damage from being bombed in 1992 during the Bosnian War. It was repaired in 2000.

A Muslim home destroyed by Serbian militants during the Bosnian War.

A convoy of vehicles from the 9th Engineer Battalion crosses the Sava River into Bosnia in support of Operation Joint Endeavor, a NATO-led multinational peace enforcement force in Bosnia and Herzegovina (1995-96). The elevated bridge between Bosnia and Croatia still shows damage from being bombed in 1992 during the Bosnian War. It was repaired in 2000.

Life has been a long journey for Ajla Isakovic – longer than her 30 years and longer than the more than 4,200 miles from the town of her birth, Zenica, Bosnia, to Burlington.

When Isakovic journeys back to her earliest memories, they are of sheltering more than 25 years ago. During the Bosnian War (1992-95), she and her friends could play together, but close to home – or someplace they could run for refuge when the alarms went off.

Today, while children are sheltered at home and playing only with members of their family, Isakovic herself travels to work at the University of Vermont Medical Center. As an ophthalmic technician, she is an essential worker.

Zenica is in the center of Bosnia. Much of the fiercest fighting took place in cities closer to the border, but still Isakovic remembers hearing the alarms and being hungry.

“My mom and I were walking back from the store to our building. The alarm went off and Mom dragged me and started to run into the closest building. As we ran into the building, I turned and saw a bomb fall on a man on a bicycle and the body pieces go everywhere. And then it was darkness,” she said.

During the war, there was little work. “More than 80% of the people didn’t work,” said Isakovic.

He father would leave looking for food. She remembers worrying and waiting with her grandmother for him to return.

“My mom said that we wouldn’t have food for three days. When I was 3 or 4 years old, she took us to a church and the church fed me,” Isakovic said.

Mensura, who asked to be identified by only her first name, also works at UVM Medical Center.

Like Isakovic, she is Muslim and one of the groups targeted by the Serbs for ethnic cleansing.

“When the Serbs attacked, they killed many Muslims, Catholics and Croatian ethnic people,” Mensura said. “So, we stood up together and fight together.”

“When Yugoslavia spit up, Serbia was not happy with how they split up the land. They wanted more land than they were given,” said Isakovic. “They wanted to take back the land by exterminating Islam.”

Where she lived the Muslims and Catholics worked together to survive. Her mother’s best friend is Catholic.

“They would even take me to church,” she said. “With the kids in the neighborhood, anytime we got any candy or a soda we’d all gather and share.”

A difference in Isakovic’s two experiences with sheltering is she’s “not stuck at home,” she’s “safe at home.”

She’s thankful to have plenty of groceries and to be able to visit with people, even if it is just on her cell phone.

‘We had to escape to be safe’

Mensura was 26 when the war started and Brčko was in one of the cities on the border where the fighting came quickly and devastatingly.

Brčko is on the Sava River, which was the border between Croatia and Bosnia. On April 30, 1992, the bridge over the river was bombed. Hundreds of people crossing were killed, although the exact number is unknown because many bodies fell into the river and were not recovered.

“So many people died at the bridge, we had to escape to be safe,” said Mensura.

Refugees fleeing the fighting found shelter through networks of friends, asking friends of friends if they had room, Mensura said.

She and her family were nine people staying in two rooms with a family who had taken them in.

Today, she said, it’s a choice. People choose to stay home to be safe from this threat.

Both Menura and Isakovic say that this current experience with restricted travel and human interaction is much better than their memories of surviving the restrictions of staying alive during the Bosnian War.

“It’s hard to talk about. Now, after many years it brings back memories,” Mensura said. “But also, good memories.”

She met her husband and they were married during the war. They moved to Burlington with their daughter in 1998.

After the war ended, when Mensura’s family returned to Brčko, everything was devastated, including their home. Her family rebuilt their house from scratch, she said.

She, her husband and daughter moved to Burlington in 1998 because she had relatives here and the job prospects.

Likewise, relatives and the lack of employment in Bosnia drew Isakovic’s parents to Burlington.

Then and now, as Mensura said: “Families take care of families.”

Stowe has had eight COVID-19 cases, Morristown seven, and Cambridge and Waterbury six apiece, according to a new town-by-town map posted by th…