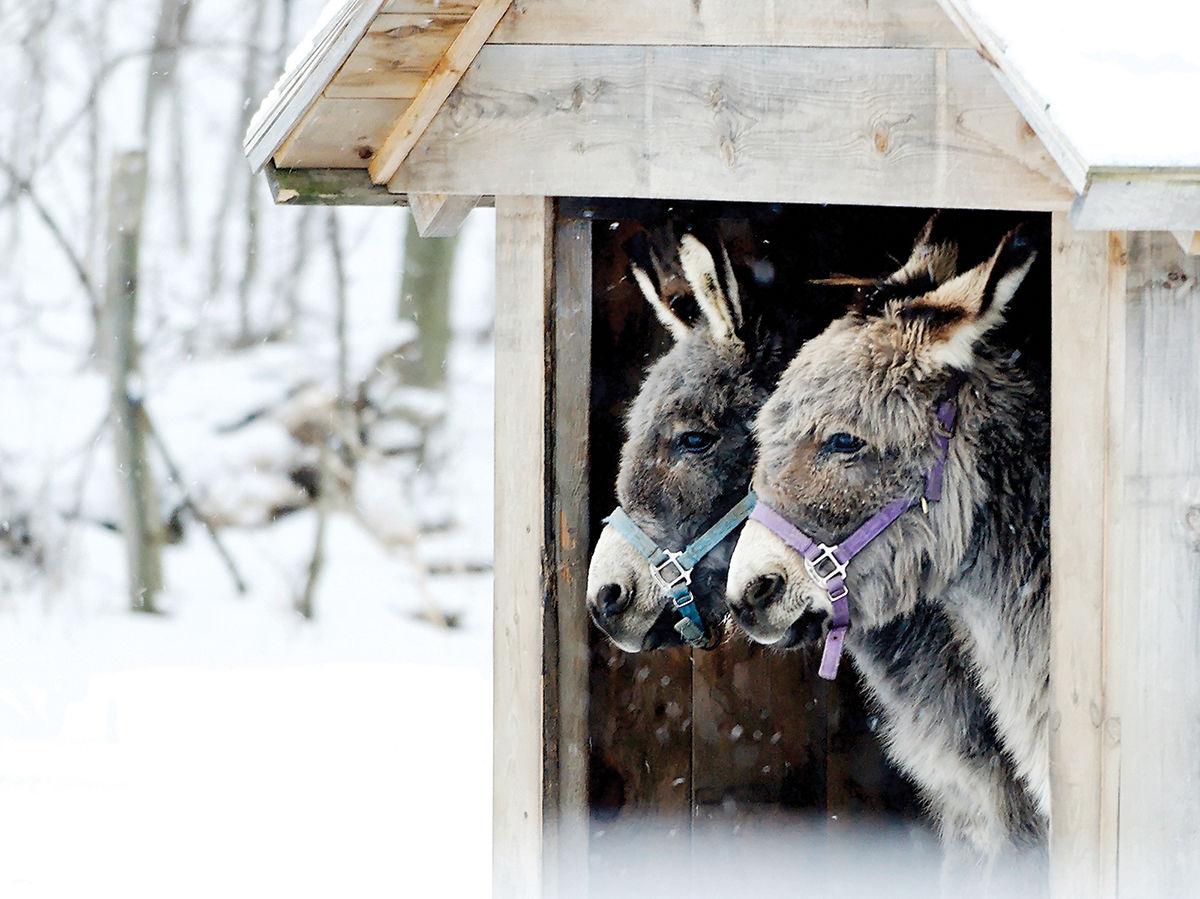 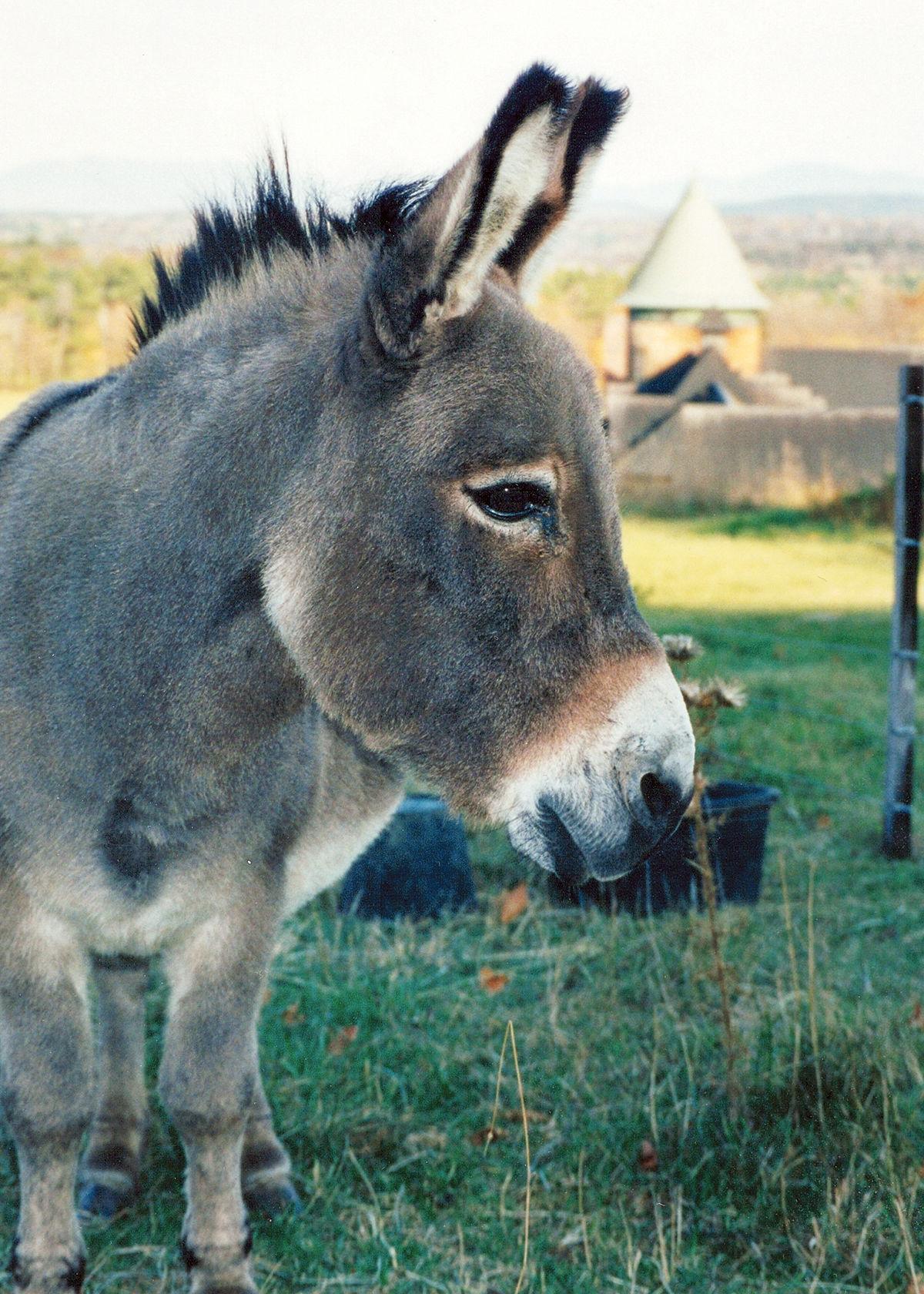 Dudley overlooking the fields he ruled with kindness and calm for 28 years as The Donkey.

Dudley overlooking the fields he ruled with kindness and calm for 28 years as The Donkey.

On Wednesday, Oct. 30, Dudley wasn’t feeling well. With winter just over the hill, his spoiled joints were beginning to whine about cold weather and the threat of more to come. Sometime in the late afternoon, around chore time, the urge to nap seemed to be more important than anything else, so he laid down in a field where he’d worked for more than 28 years and went to sleep.

He never woke up.

An important ambassador of Shelburne Farms, a critical colleague on the farm’s educational team, a beloved host to hundreds of thousands of children – and adults – was gone.

Dudley, a miniature Sicilian donkey, was 8 years old when he came to Shelburne Farms in 1991 and he fit right in. He was there from the inception of the Children’s Farmyard and calmly and warmly submitted to petting and brushing by innumerable people.

“His temperament was always gentle. He never had a mean spirit in his body,” said Susie Marchand, Agricultural Education Coordinator at Shelburne Farms, “except for occasionally mistaking a finger for a carrot.

“There are so many kids that know Dudley. We are going to miss him a lot. And the kids who come to the farm,” she said. The beloved donkey remained patient for almost three decades of random hands, even when tiny fingers sometimes playfully poked him in the face.

The staff at Shelburne Farms knew the end was near. At 36, Dudley had lived a long and full life for a Sicilian donkey. Children’s Farmyard Manager Noel Perriello had been close by that day but left for another chore.

When she returned 10 minutes later, Dudley had gone to greener pastures.

Donkeys are also called asses and male donkeys are known as jacks, so although technically Dudley was a jackass, he never acted like one.

Unless, of course, if you were a predator. By braying he would scare off animals that didn’t have any business being there. And humans.

“He would let you know when somebody was going by that he wasn’t sure about,” said Marchand, who’d known Dudley since he arrived on the farm. She fed him for about 10 of those years.

“I don’t know what it is about Dudley, but he’s always sort of been ... The Donkey,” she said.

On the Shelburne Farms’ blog on its website, people are encouraged to share their memories of Dudley and people are saying that visiting him was always a big part of their trips visits. For so many people, their first stop on a trip to the farm was a visit with Dudley. And by the way, it’s a huge farm and there’s lots to do.

One of Marchand’s favorite Dudley stories is about one evening when they were singing with a group of kids on the hill behind the Farm Barn.

On this evening when the fourth and final “hee haw” was sung there was a silent pause and then right on cue, with flawless comedic timing, from out of sight and two fields away, Dudley brayed a fifth and final “hee haw,” his own a cappella reminder that your donkey needs regular and prompt nourishment.

“There was one little sneaky thing that he did,” said Marchand. “He was very smart. He always knew who had hold of the lead. I told people when we were walking him outside the fence. ‘He knows if you’re not paying attention.’”

He would appear to just be walking slowly and all of sudden he’d bolt. Marchand warned people if he did that, they needed to drop the lead or they would get dragged.

A number of the staff did relax their attention, didn’t remember to drop the lead and got dragged. But – and it’s a big but that says so much about the wonderful donkey that was Dudley - “He never dragged a member of the public. Just staff,” she said.

This article misidentified Marcia Nappi, who along with Bill Nappi donated the beloved and recently deceased donkey, Dudley, to Shelburne Farms. The text in this article has been corrected.

Dudley was donated to the Shelburne Farms by Bob and Marcia Nappi and a few years later they donated a female companion to the farms. Over the years, Dudley and Penelope, who was also a miniature Sicilian donkey, were rarely seen separately. They had three foals together.

Cat Parrish, Family Program Coordinator and Farm-Based Educator, said that Dudley helped her teach so many kids a lot about animal life and what it takes to care for an animal like learning to feed them, keep their water filled, grooming them “and just being kind to animals.”

“Some kids have even learned to pick his hooves and clean out his feet,” she said.

Parrish said that everyone always got her safety speech about watching out for your toes and being careful when you walk behind him, even though she couldn’t imagine Dudley ever doing something aggressive like stepping on someone’s toes or kicking them.

“Even though in my seven and half years with Dudley I’ve never seen him kick, but it’s a crucial lesson to learn because they might be with another donkey that’s not as calm as him,” Parrish said.

The staff has worried about Penelope and how she would react to losing her mate of so many years. As time began to catch up with Dudley, they decided they needed to do something. The staff started introducing the four farmyard sheep into the fence with Dudley and Penelope.

“Now, I find her grazing along with the sheep. I don’t know how wild she is about it, but I hope she’s finding some companionship with the sheep,” said Parrish.

“He’s been slowing down for a long time,” she said. “I’m grateful we didn’t have to make the decision for him of whether we should let him go through another winter,” as the cold months were getting hard for Dudley.

Dudley was a magnet for Shelburne Farms, both literally and figuratively. Besides the many people who were attracted to the farm by the irresistible pull of Dudley’s charm, he graced many refrigerators thanks to a magnet with his likeness sold at the gift store.

My first day on the job was Thursday, Jan. 3, the only paper of 2019 that I didn’t contribute to with stories or pictures.