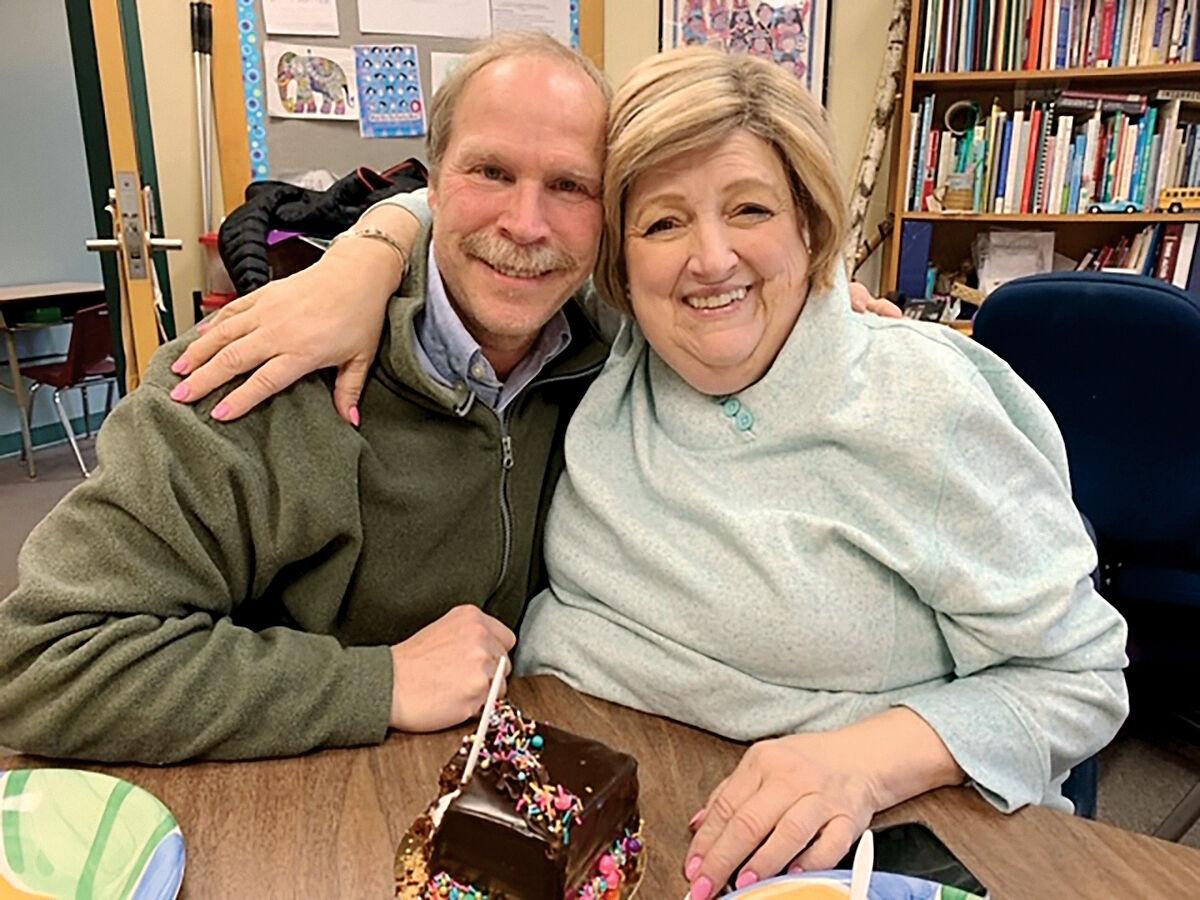 Former Chamberlin School teacher Kathy Buley poses with her colleague Dean Melen and one of her famous chocolate cakes. 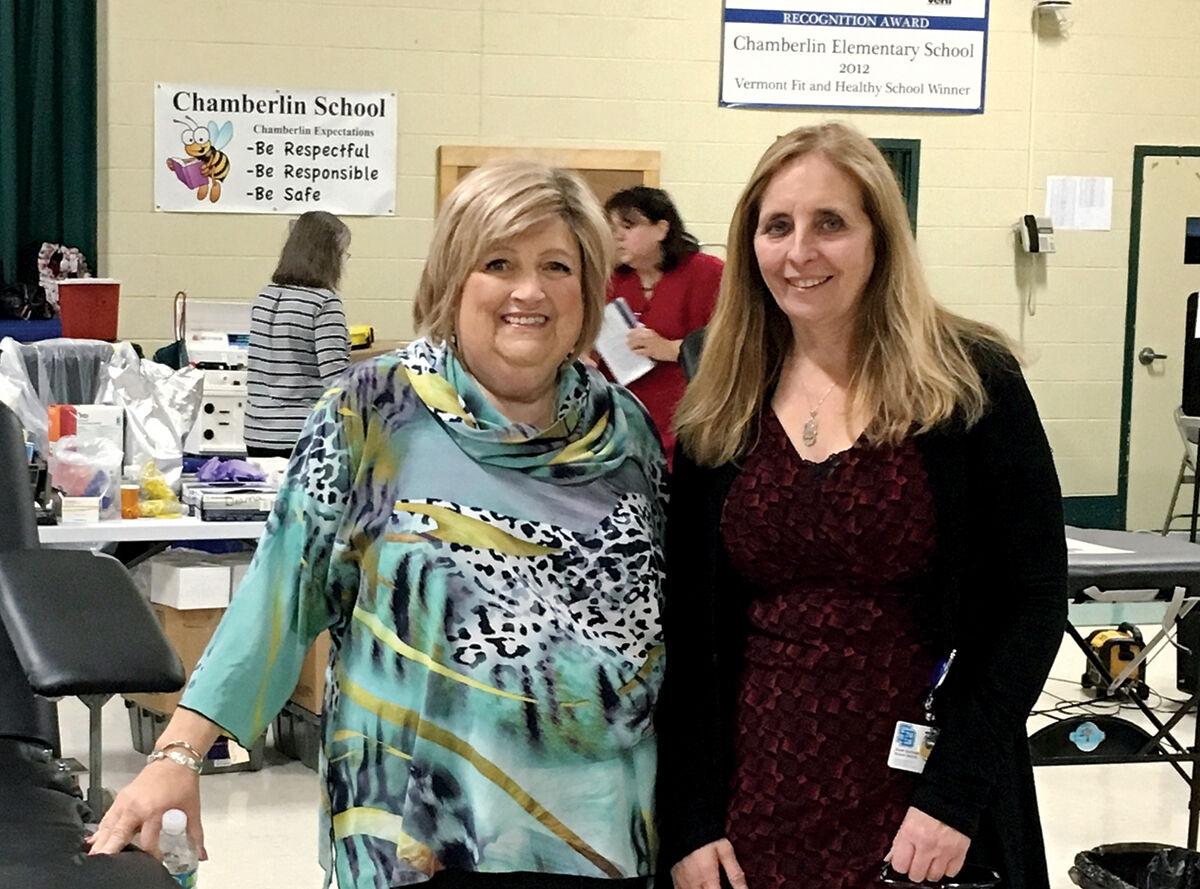 From left to right, Chamberlin School teachers Kathy Buley and Cindy Tan at a blood drive that was held in Buley’s honor last year. Buley was fighting pancreatic cancer and had received lifesaving blood transfusions.

Former Chamberlin School teacher Kathy Buley poses with her colleague Dean Melen and one of her famous chocolate cakes.

From left to right, Chamberlin School teachers Kathy Buley and Cindy Tan at a blood drive that was held in Buley’s honor last year. Buley was fighting pancreatic cancer and had received lifesaving blood transfusions.

Kind, generous, smart. A mentor, teacher, leader, friend, mother and grandmother — South Burlington teacher Kathy Buley was many things to many people, but above all, she was loved.

Her two-year battle with pancreatic cancer ended on Oct. 15.

Gathering for an outdoor, socially distanced, vigil to remember the incredible woman, her colleagues wore purple ribbons. Together they shared photos and stories, offering each other support — something the late teacher was known to do.

For 41 years, Buley taught at Orchard, Rick Marcotte Central and Gertrude E. Chamberlin schools. Generations of families came under her wing and she did it with poise, humor and a sharp sense of style.

In February 2018, Buley felt something was amiss, when, in her classroom, she suddenly became very tired.

“I was just so fatigued, actually my colleagues became concerned,” Buley told The Other Paper in 2019.

They encouraged her to go to the emergency room, where she learned she had stage four pancreatic cancer.

Buley later moved in with her son in Massachusetts, closer to care at the Dana-Farber Cancer Institute.

Learning of Buley’s diagnosis was a sad day for those close to her, friend and coworker Dean Melen recalled.

Buley’s friend and teaching partner Keelin Simpson said the veteran teacher remained ever present despite her diagnosis. Buley regularly called, emailed and texted her co-workers. She even volunteered to help Simpson get ready for school this year, offering to make name tags for students.

“She was just an amazing role model for people going through a terminal illness like that. It was just amazing. She always, always smiled and everybody always got off the phone with her going, ‘Man, she looked good, she sounded great,’” Simpson said.

“None of us knows how we would handle that situation, until you’re actually in it. But I guess I would hope that if I’m ever in that situation that I could handle it with one-tenth of the grace that Kathy did,” Buley’s colleague Kathleen Murphy added.

“She would come up to visit. She would stop by the school, check in, her students were in fourth grade and she came back and they just all came up and hugged her,” Rouelle recalled.

When Chamberlin School held a blood drive in her honor Buley brought flowers and handwritten thank you notes for donors.

Melen last spoke with Buley about two weeks before she died, when she called to ask how he was doing.

“We had a really wonderful conversation. I just picked up my phone and there was her voice, there was Kathy. Laughing and joyful as Kathy always was,” he said.

She passed quickly, in a sudden turnaround, Rouelle said. But she was with her family, and she was comfortable, Melen said.

As a teacher, Buley put love and care into her work. She was a champion of the underdog, advocating for students who had it tough, Keelin said — Buley often made things better for them.

She worked closely with New American families to make sure both the students and their parents were taken care of, Melen said.

She was also an expert on mindfulness and helping kids manage their emotions, Simpson said.

“Kathy would just build such a sense of community in her classroom she really held her kids accountable in an incredibly loving way,” Rouelle said.

She was a teacher among teachers if ever there was one. Buley saw to new teachers, helping them feel welcome and offering advice. She launched the very first South Burlington Teacher Mentorship program, guiding them through their learning curve.

Jennifer Boudreau was one of the first teachers she mentored.

Boudreau jokes that it was Buley who hired her to teach at Chamberlin. Boudreau used to substitute before applying to a full-time job at the school. She had become familiar with Buley during her subbing days. Boudreau said she is terrible at interviewing and she was glad to have Buley sit-in on her interviews.

“Luckily she knew how I taught and how I was in the classroom with kids and pretty much said, ‘I know Jen, she might not interview well but guess that she’s good with kids,’” she recalled.

Buley was a skilled leader, taking in discussions at meetings, summarizing the main points and offering solutions, Melen said.

She also formally served her colleagues as co-president of the teachers’ union.

“She was this very moderate measured voice and as a leader in our association,” Murphy said. “She was an incredibly strong advocate for teachers, and for students in [that] she was very well spoken.”

As union co-president, Buley gave the annual address to teachers every other year.

“She was just so inspirational in her words to the entire faculty. Her ripple effect went well beyond Chamberlin,” Rouelle said.

But Rouelle also remembers the early days of her relationship with Buley, when Rouelle was a new administrator.

By the end of Buley’s time at Chamberlin, Rouelle said she’d frequently go to her to ask how the faculty was doing and what the school could be doing better.

“I miss that, just going to her,” Rouelle said. “She was just such a good listener and such a good problem solver.”

Buley also liked to laugh, and to make others laugh. And she loved a celebration.

And if you tried to do something nice for Buley in return, she’d end up doing something four times as nice as a thank you, Melen said.

“She was just stunning in that way, a very beautiful person who wanted so much to give to others.” he added.

Though COVID-19 has barred social events from taking place at the school, the Chamberlin community hopes to launch an annual blood drive in Buley’s memory once it’s safe to do so, Rouelle said.

I learned last week that Kathy Buley passed away. Kathy was a teacher in South Burlington for over 30 years.