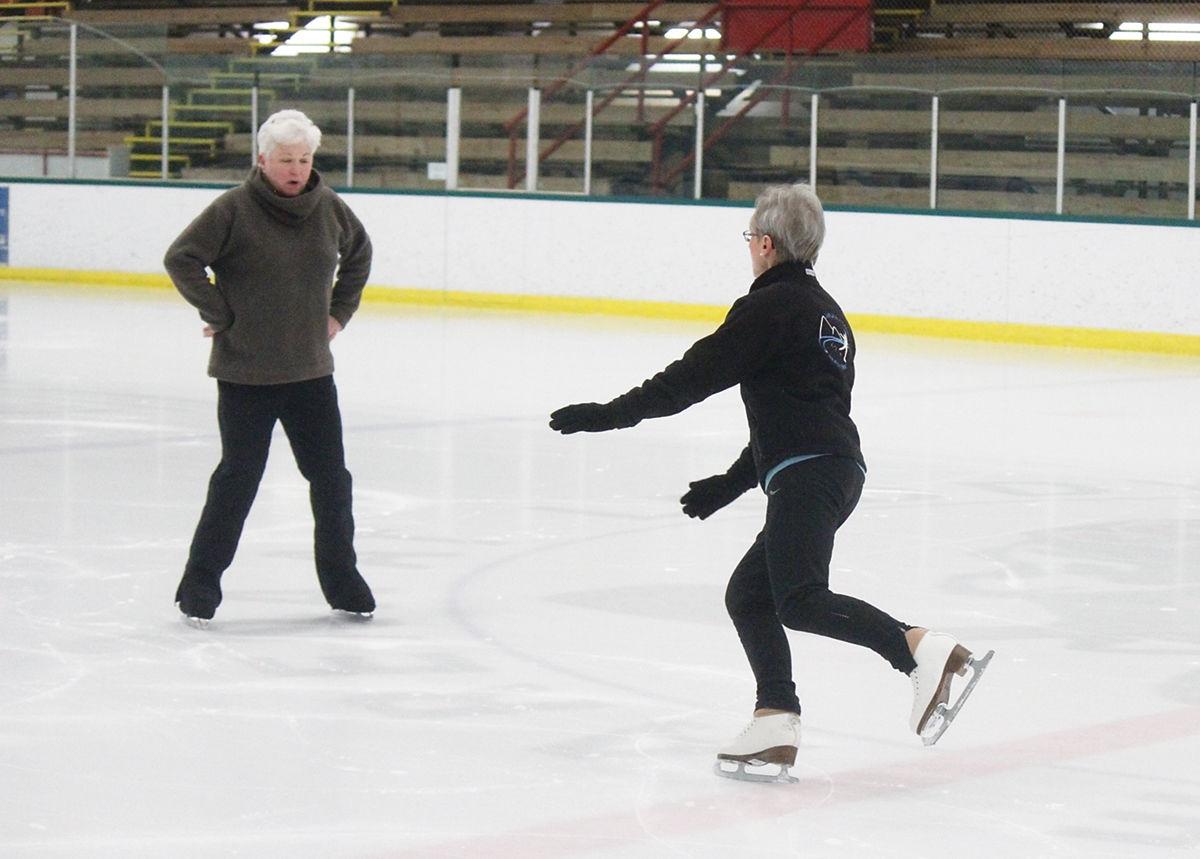 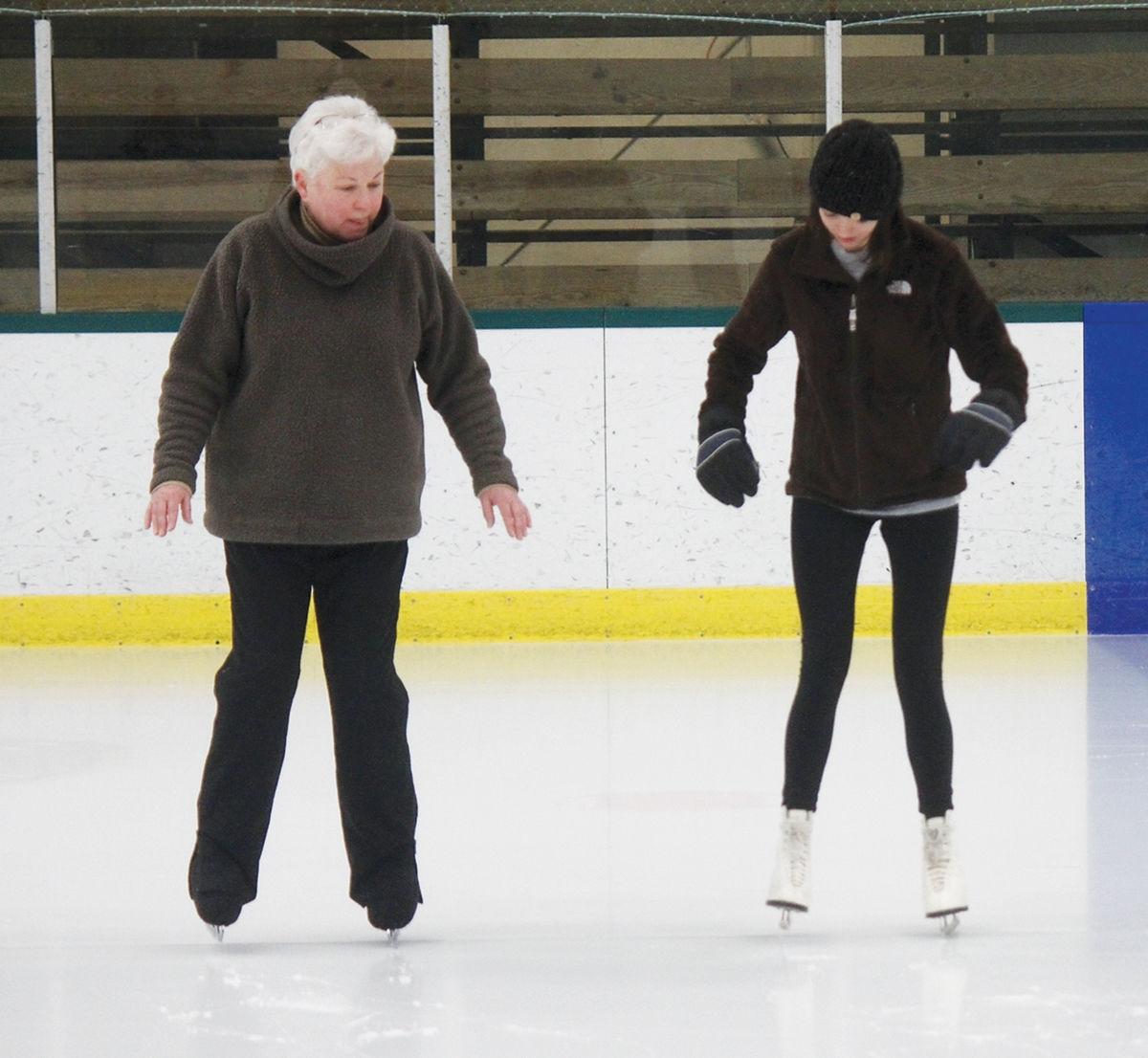 The Other Paper’s Madeline Clark takes to the ice with coach Martha Hubbard on Dec. 31 at the Leddy Arena.

The Other Paper’s Madeline Clark takes to the ice with coach Martha Hubbard on Dec. 31 at the Leddy Arena.

The Other Paper staff writer Madeline Clark received national attention when her Nov. 7 piece, From novice to gold medalist at 75, featuring Rep. Maida Townsend was read into the Congressional Record on Tuesday, Nov. 19, by Sen. Patrick Leahy as part of a tribute to Townsend. Congratulations, Maddie!

Bob Lapointe, maintenance specialist at the arena, is surprised to see me in the snack bar. Rep. Maida Townsend (Chittenden 7-4) is usually one of the first skaters there, and she doesn’t arrive until 5:45 a.m., he tells me. Lapointe has worked at the arena for years and makes some of the best ice, according to Townsend. He keeps threatening to retire, but she’s hopeful he’ll stick around awhile longer.

Lapointe circles the Olympic size rink in the Zamboni, adding a fresh layer of water that soon glazes over. It’s hypnotizing to watch him spin round and round. Townsend arrives and we chat about the lesson to come. She loves that my skates were a $4 find at Goodwill.

My wallet does too.

When Coach Martha Harding arrives it’s on. Before I know it, I am marching around a bench to practice the movement I’ll be making on the ice. Then I am squatting, tilting over to my side and getting a feel for recovering from a fall. Falling is part of skating, Harding tells me. I lock that away in my mind for later.

The glides are a lot shorter than I want them to be and I am favoring my right leg. But Harding helps me. She has a calm, encouraging demeanor. She helps me figure out why I’m drifting one way or another. Harding tells me to refrain from over processing. As we lap the rink, I find this to be nearly impossible. And though I shouldn’t expect to look like a Smuckers “Stars on Ice” skater on day one, I totally understand Townsend’s desire to look competent. She learned to skate as an adult but doesn’t want that to show, she told me.

We worked on swizzles, which are as fun as they sound. I’ve long been in the camp of picking my feet up over and over to traverse the rink. Keeping my feet on the ice and using my knees to bend and propel was a foreign but welcome change. Little by little I came along, tracking almost straight, wobbling occasionally and nearly falling more than I’d like to admit.

But falling is a part of skating.

We go over stopping, a skill I’ve never had and was eager to learn. No more shall I crash into the side of the rink … well, at least maybe a little less. Harding tells me to think of it as shaving the ice. I drag the side of my blade out beside me and bend my knees. She tells me to keep them bent until I’ve reached a complete stop. Then, I should count to three before I get back in motion, she says.

We end our lesson with an intro to skating backwards and getting a feel for switching directions. I don’t take to those skills as well, but it’s always good to have something to work on.

Harding changes gears from my lesson to Townsend’s. I keep on practicing my new techniques. It’s amazing to see Townsend spin, jump and skate circles around me. To think that she started at age 50 and has won an international competition at 75. I put my head down and keep practicing the basics.

Well over a foot of snow blanketed the region last week leaving behind this majestic view of Mt. Mansfield from Dorset Street.

The Other Paper honored at Press Association awards

Reporter Madeline Clark of The Other Paper was acknowledged twice for her achievements in journalism at the New England Newspaper and Press Association’s 2020 New England Better Newspaper Competition Award Winners – Journalism.

City Manager Kevin Dorn gave the sidewalk outside the Allard Square Senior Center a final shovel in preparation for the afternoon’s guest. Rep. Peter Welch (D-Vt.) was on his way to see the progress made in the city’s Tax Increment Finance district, City Center, since his last tour of the street two years ago.

It colors the homes of many private collectors. It decorates major American museums. It has transcended time from when it was introduced on American soil in the 17th Century.