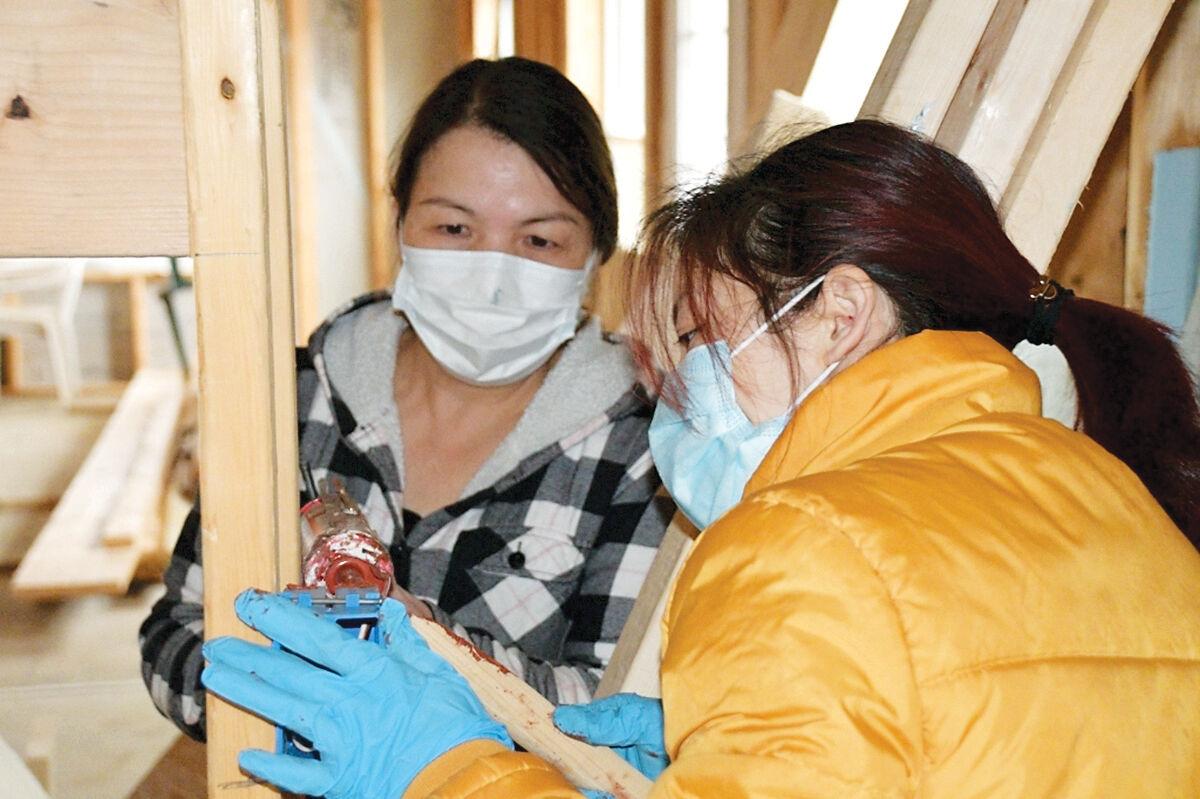 Ling Jiang, right, and her mom, Jin, donned work gloves and jumped into construction alongside Habitat for Humanity team members to help build their new home. 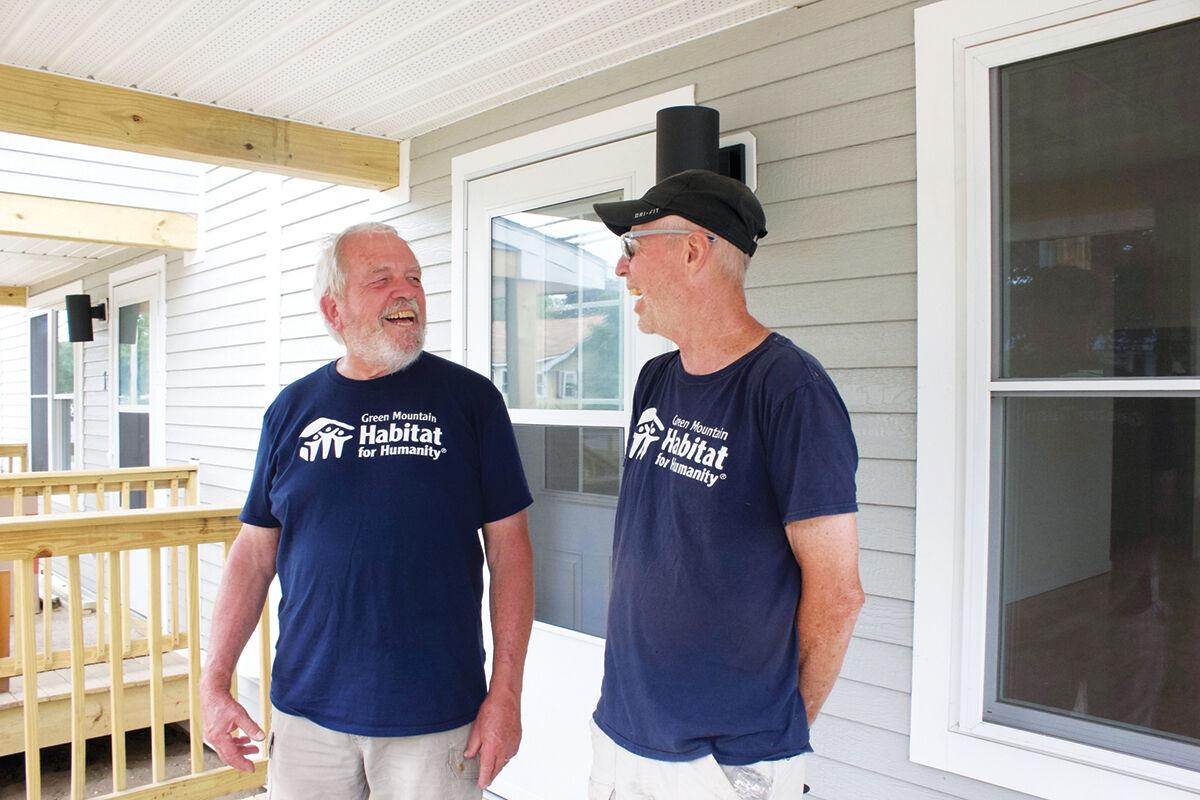 Dick Shasteen and Bill Gerlack volunteered building houses with Habitat for Humanity for about five years together. They dubbed their crew, the Geezer Team. 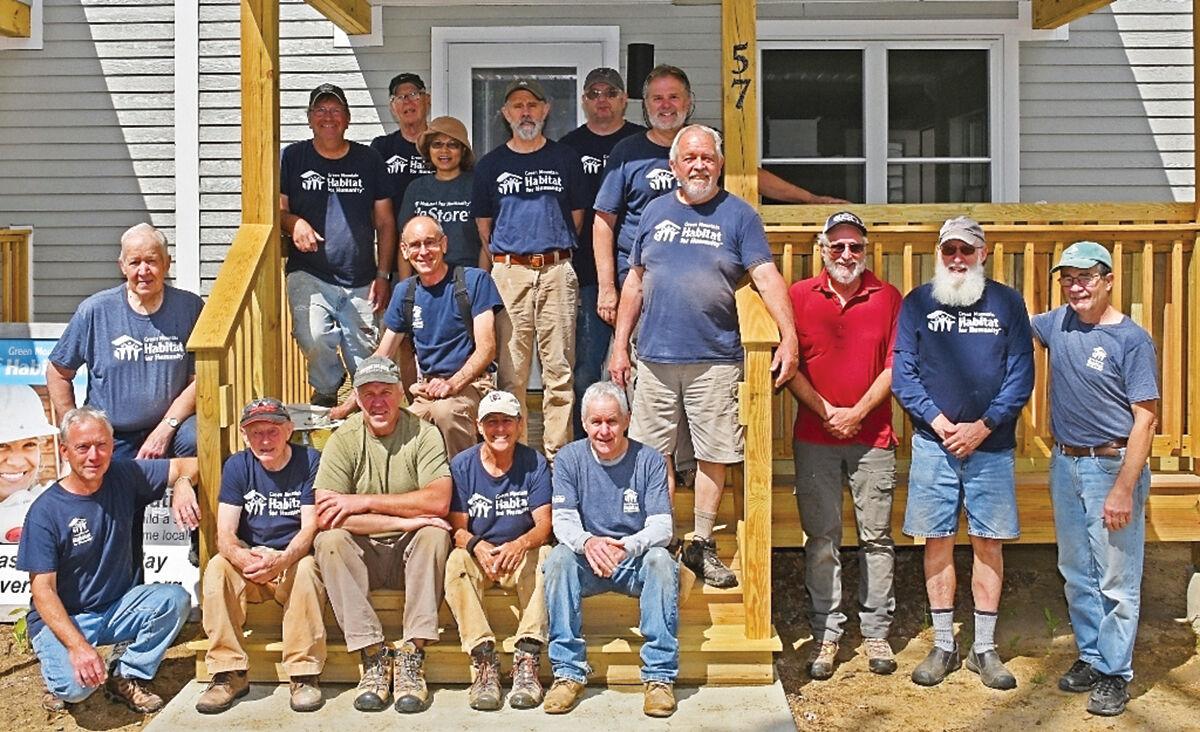 The Geezer Team with Green Mountain Habitat for Humanity built the Jiang’s home in under 100 work days.

Ling Jiang, right, and her mom, Jin, donned work gloves and jumped into construction alongside Habitat for Humanity team members to help build their new home.

Dick Shasteen and Bill Gerlack volunteered building houses with Habitat for Humanity for about five years together. They dubbed their crew, the Geezer Team.

The Geezer Team with Green Mountain Habitat for Humanity built the Jiang’s home in under 100 work days.

Ling Jiang gestures around her new living room: she’ll put the couch on the side wall, the TV on the opposite one near the stairs and the dining room table next to the kitchen. Jiang’s 6- and 2-year-old boys giggle and walk in curly-q’s around the empty living room, sucking on juice boxes, while she plans aloud.

Later this month, Jiang, her mother and her two sons hope to move into their newly built house — one of four perpetually affordable units built by Green Mountain Habitat for Humanity in South Burlington over the last year. The four units are Habitat’s first homes for ownership built in the city, where the rising cost of housing and a tight market are straining families like Jiang’s.

“It’s very expensive in South Burlington right now, so it’s a very good chance for us to live in this house,” she said.

While Habitat volunteers Bill Gerlack and Dick Shasteen are no strangers to building houses, the number of regulatory high jumps they had to vault, and the amount of permitting fees required, left the two confounded.

“Total fees were well over $30,000,” said Shasteen, who volunteers with Green Mountain Habitat for Humanity as Project Manager. He and Gerlack work together with around 16 other volunteers on what they call the Geezer Team.

“In Chittenden County, the lack of supply and the cost make it more and more difficult to locate land that’s affordable,” explained David Mullin, director of the nonprofit. The Jiang family was one of about 200 families applying for Habitat’s seven in-progress homes in Chittenden County, he said.

Applicants first work with Habitat partner Champlain Housing Trust to see if they meet income qualifications — 80 percent less than median income. They must also be living in sub-standard housing, said Mullin, which could mean their housing is “unsafe, unhealthy, overcrowded, perhaps they’re spending more than 50 percent of their income on rent.”

Once approved, applicants become partners, he said — part of the team. They contribute around 400 hours to help build the house, as a way to empower them as homeowners.

“We want families to realize that they also have the ability to help build their own future and their own house,” he said.

The Jiangs’ house is just a few blocks from City Center, which will open to the public next week, and within walking distance of grocery stores, restaurants, bus stops, the mall and South Burlington schools.

But since it is located in the form-based code zoning district, all buildings are held to the same requirements regarding their form and layout on the lot, according to development review planner Marla Keene, regardless of whether the project is capital “A” affordable housing. Keene also noted that the city has an Affordable Housing Trust Fund that developers can request be used for reimbursement for application or impact fees.

The Jiangs’ house had to have a specific kind of siding, a metal bicycle rack and additional bike storage, a certain number of windows, landscaping — the list goes on. These requirements aren’t a surprise, nor are they all superfluous.

Black-Plumeau is also a member of the South Burlington affordable housing committee, where she says members have discussed what are some best practices to encourage more affordable housing development. One way “is to consider waiving or reducing impact and permitting fees, especially for housing that is going to be affordable,” she suggested.

Despite the regulatory headache, Shasteen was quick to commend South Burlington planning and zoning staff who were “super supportive” throughout the process.

“They were very helpful. It’s just that they’re bound by a set of rules and regulations, and they can’t deviate,” said Shasteen.

The Jiangs’ house took about six months to permit and 100 work-days to build. The foundation was cast in July of 2020 and the Geezer Team began work the first week in August. Jiang and her mother, Jin, jumped into construction last October.

With about 13 people on the job, give or take a few, and over 6,000 hours of build time, Gerlack noted the major savings from volunteer labor.

“We have a relationship with a lot of local vendors and suppliers of goods and services,” added Shasteen, which often results in discounts and deals.

Still, most project expenses — the land purchase, the time and labor, permitting, materials — are shouldered by Green Mountain Habitat for Humanity. “We’re very dependent on local donors. We don’t have a giant foundation — it’s individual donors that make a $100 dollar donation,” Mullin explained.

Without those cost-savers, building affordable housing like the four-plex — each unit costing around $130,000 — seems barely feasible in Chittenden County, where the median primary home price is $335,000, according to Vermont Housing Data. The median gross rent in South Burlington is $1,401 compared to $985 across Vermont, per U.S. Census Bureau estimates.

The Jiangs’ are currently staying with a cousin and their family — about five adults and two children to one bathroom. Jiang is looking forward to making her new house her own. She’s planning to grow a vegetable garden; her mom has already started tomatoes and green onions, she said.

“My mom’s here every day and my sons are here every day. They say, ‘Oh, it looks different!’ It’s very exciting,” she said, describing the process to help build her own house as “awesome.”

While they haven’t moved in yet, Jiang has already picked out powder-blue knobs, speckled with polka dots, for all the kitchen and bathroom cabinets. “Everything will be personal, everything will be yourself,” she said.