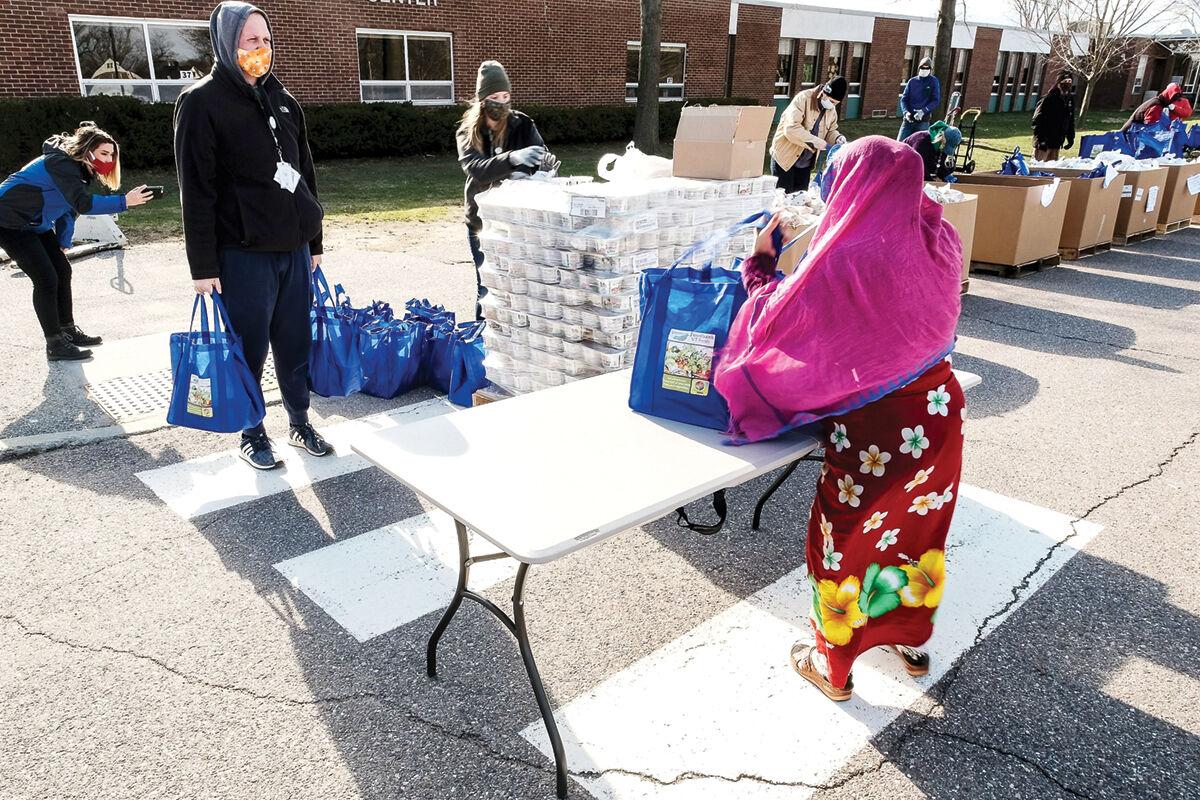 A woman grabs a meal bag from the Vermont Foodbank during an April distribution event in Winooski. 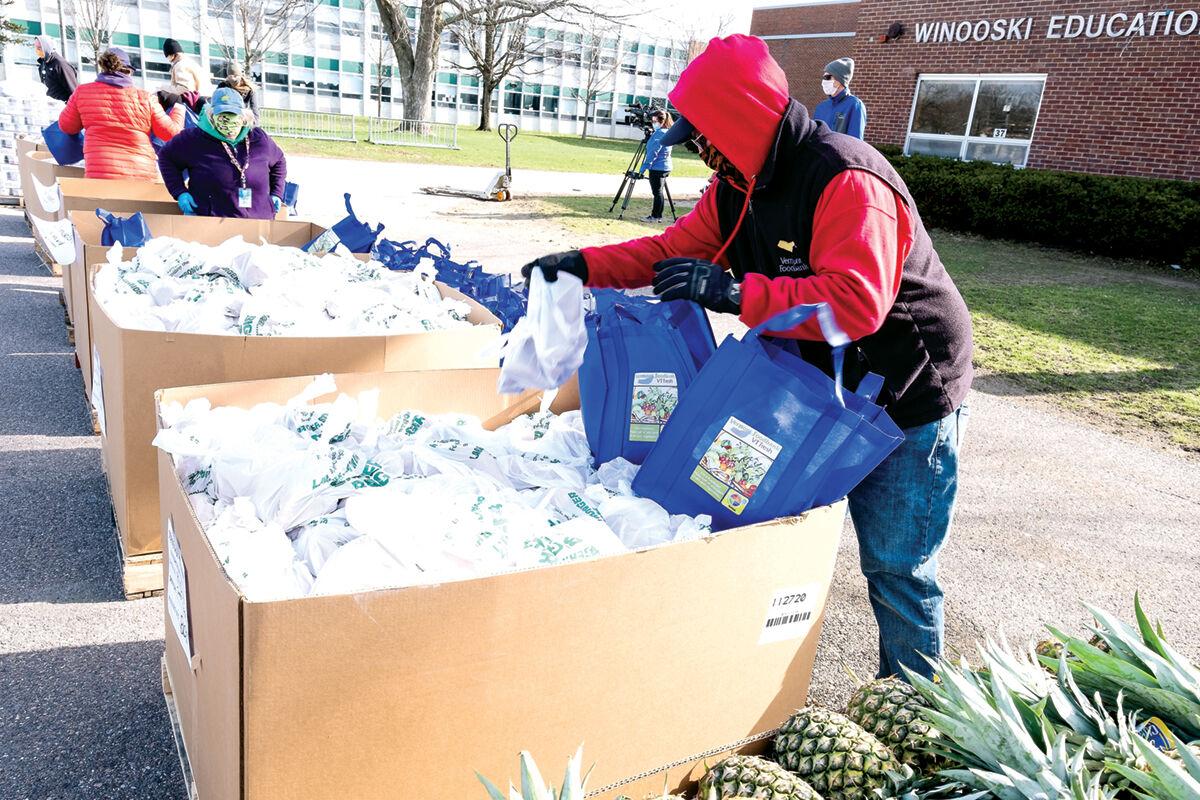 Volunteers and members of the Vermont Foodbank prepare meal bags for distribution during an April distribution event in Winooski. 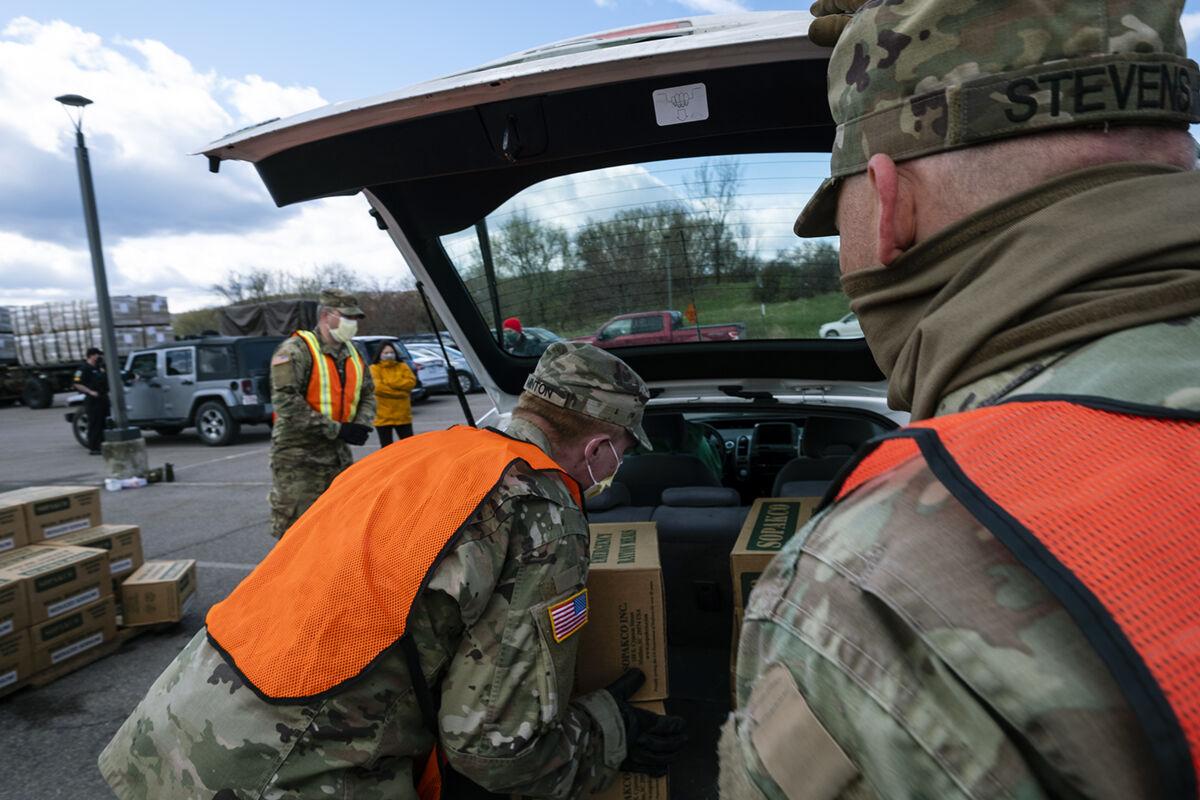 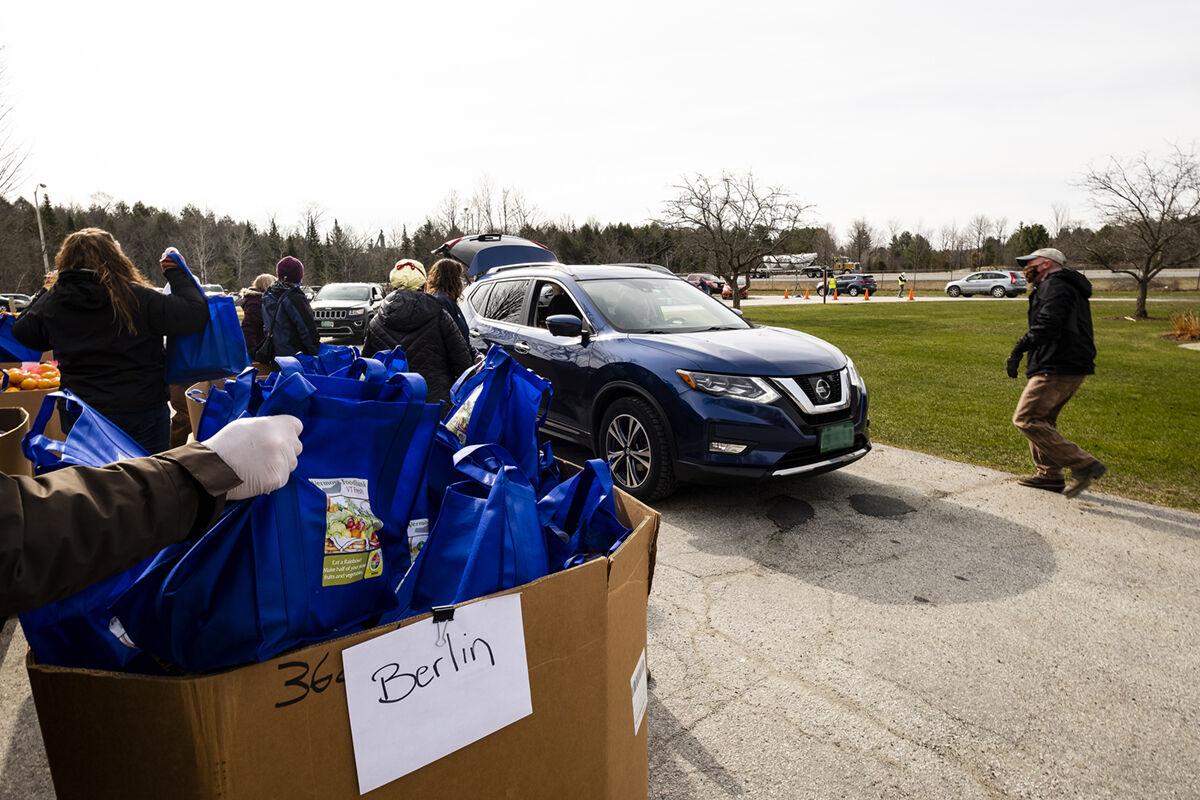 Cars line up for Vermont Foodbank meals at the Berlin Elementary School.

A woman grabs a meal bag from the Vermont Foodbank during an April distribution event in Winooski.

Volunteers and members of the Vermont Foodbank prepare meal bags for distribution during an April distribution event in Winooski.

Cars line up for Vermont Foodbank meals at the Berlin Elementary School.

On a hot May day, the Vermont Foodbank, the Abbey Group and the National Guard held the first Farmers to Families food box distribution, offering USDA-funded boxes of produce, meat, and dairy products, along with “Meals Ready to Eat” from FEMA.

The event took place at the Edward F. Knapp Airport in Berlin.

Suppliers were completely unprepared for the demand: A line of cars stretched for five miles.

“Cars were lined up for miles several hours before the distribution even started,” Nicole Whalen, director of communications at the Foodbank, said. “It was devastating to see how many people in our community were in need of help.”

As the day went on, and cars kept arriving, the organizers had to divide up shares to make the food stretch.

Eventually, the Foodbank and Guard had to close airport gates so that no additional cars would line up. They were able to make sure that everyone in line got something, even if it was just a box of MREs instead of the fresh food they had been promised.

“It felt terrible to know that people were waiting that long and that they weren’t all getting the food that they came hoping for,” Whalen said.

While the organizations improved their system for subsequent Farmers to Families drop offs, the first one showed the state’s growing food insecurity, exacerbated by the COVID-19 pandemic.

Before the pandemic, roughly one in 10 Vermonters was food insecure, Whalen said.

By June, that jumped to one in four — and nearly one in five received unemployment insurance, according to a study by researchers at the University of Vermont, University of Arizona and Johns Hopkins University.

While unemployment across the state and county have declined from the April spike, the rates are still higher than pre-pandemic, according to an August report from the Department of Labor.

Federal programs like Farmers to Families have helped meet the need, Whalen said. But there’s uncertainty about what will happen to those programs in the next few months.

The Farmers to Families program has brought millions of pounds of fresh produce and meat to hungry Vermonters but is slated to end at the end of October, Whalen said.

“Unless some decision gets made at the federal level, we are not expecting that it will be extended,” she said. “When that ends, that is going to be a huge, huge drop in the amount of food that will be available to people in our community.”

The Vermont Foodbank got a sneak-peak of what the impact of the end of that program will be when a gap caused by contracting changes at the federal level caused the Foodbank to be unable to run it in September.

“That is what we are bracing for to have come Nov. 1 when that program ends,” she said.

Other programs will face challenges, too. Federal CARES act funds and state coronavirus relief have helped the Foodbank increase capacity in its programming, she said. But those dollars will run out come the end of the year.

With that in mind, the Foodbank is planning and preparing its other programming for the demand.

“All of this is going to happen, and the need is not going to go away at the end of the year,” Whalen said.

As temperatures dip, the need will likely grow. Winter generally comes with a spike in demand for food as Vermonters grapple with the cost of heating, plowing and other utilities. And as cold weather ceases COVID-inspired outdoor dining and business, there may be another spike in unemployment, Whalen confirmed.

The best ways for the community to help will be donations, volunteering at distribution sites and casting a vote this election that helps end hunger and supports those struggling to make ends meet, Whalen said.

From March to June, there was a 68 percent increase in the number of Vermonters seeking aid from their local food pantry, according to a study by researchers at the University of Vermont, University of Arizona and Johns Hopkins University.

The South Burlington Food Shelf has seen its use grow steadily, but not sharply, since opening its doors 11 months ago, said Patrick Leduc, one of its organizers.

The food shelf has served well over 300 households, Leduc said.

But without a year’s worth of data it’s impossible to say if there’s more demand this year than last, executive director Peter Carmolli said.

“We know all food shelves around the state are experiencing heavier than normal demand, so we probably are as well,” he added.

Since the only question food shelf volunteers ask clients is, “Are you a South Burlington resident,” it’s hard to say if the local unemployment rate is driving the demand.

But throughout its first year, the South Burlington Food Shelf has been supported.

“We are doing great because the support of the community has been fantastic,” Carmolli said. “We have gotten donations of food, supplies, money or offers to help every single day we have been open.”

“The food shelf continues to thrive with the support of the volunteers and the community members that continue to support the efforts both financially, food drop offs and running food drives,” Leduc said.

The community has helped by offering financial donations and volunteer support, Doris said.

The Hinesburg Food Shelf is doing “quite well,” said co-chair Jeff Glover. Volunteers and clients have adjusted to a new system in which meals are brought to clients waiting outside in their cars. While demand dropped between April and July, it is growing once more as fall, and soon winter, approaches, Glover said. The shelf obtained free food from the Vermont Food Bank for two months which helped ensure it would be well stocked for a surge in November and December, Glover said. He believes more clients will come to the shelf due to lay-offs from seasonal jobs.

The food shelf has also received donations from the community, he said.