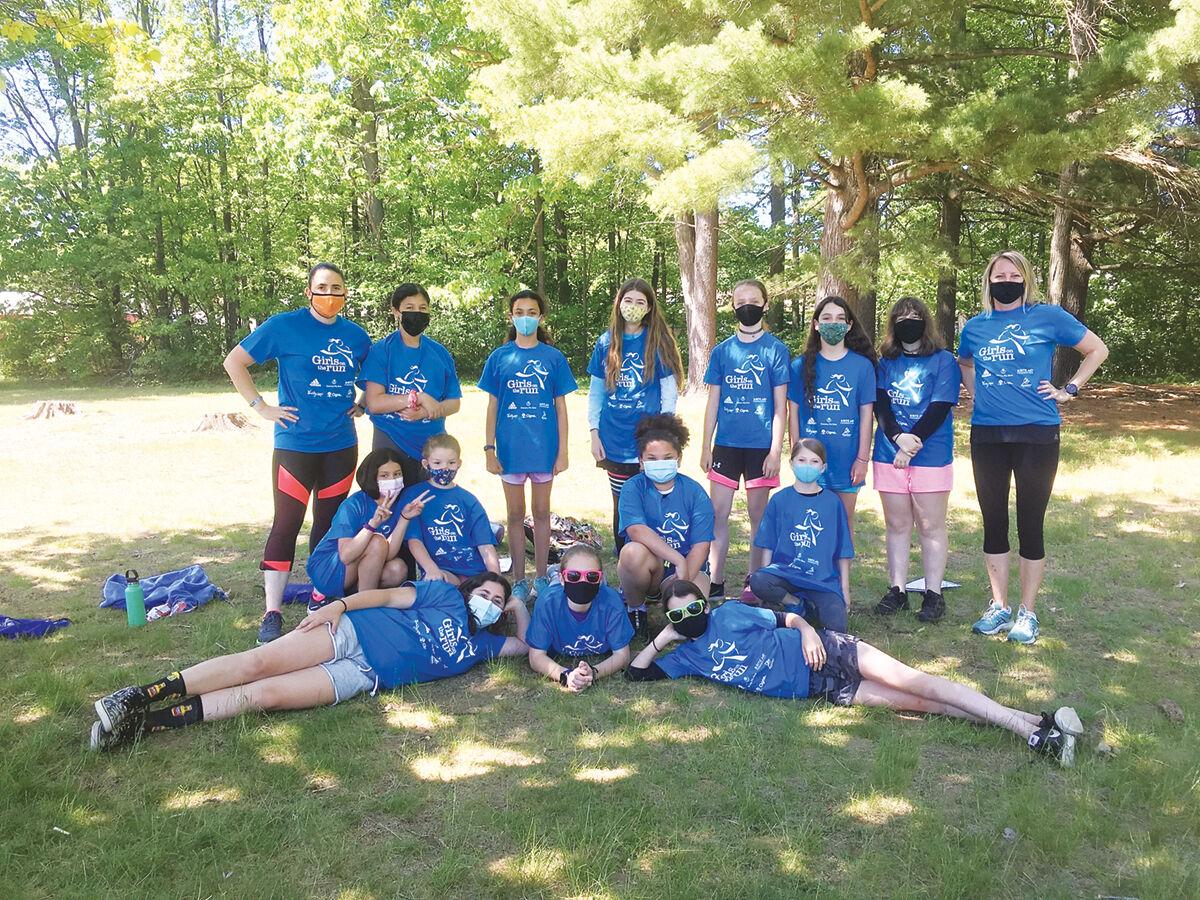 Fifth-grade Girls on the Run team at Gertrude Chamberlin pose in their new team shirts winged by coach Sharon Davis, at right, and coach Brianne Williamson, left, who is also a school resource officer. 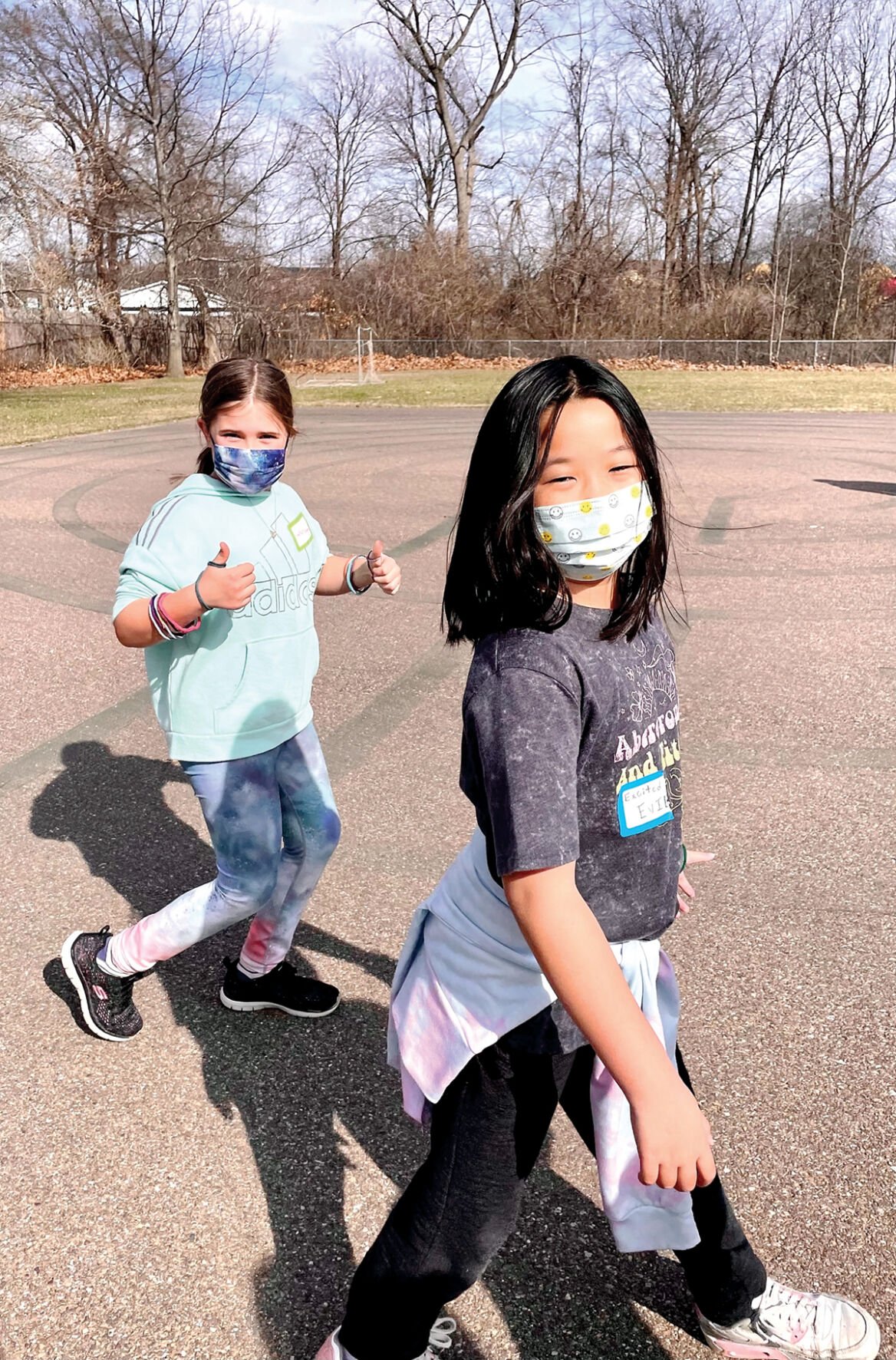 Third graders at Rick Marcotte practice their laps during a Girls on the Run practice. 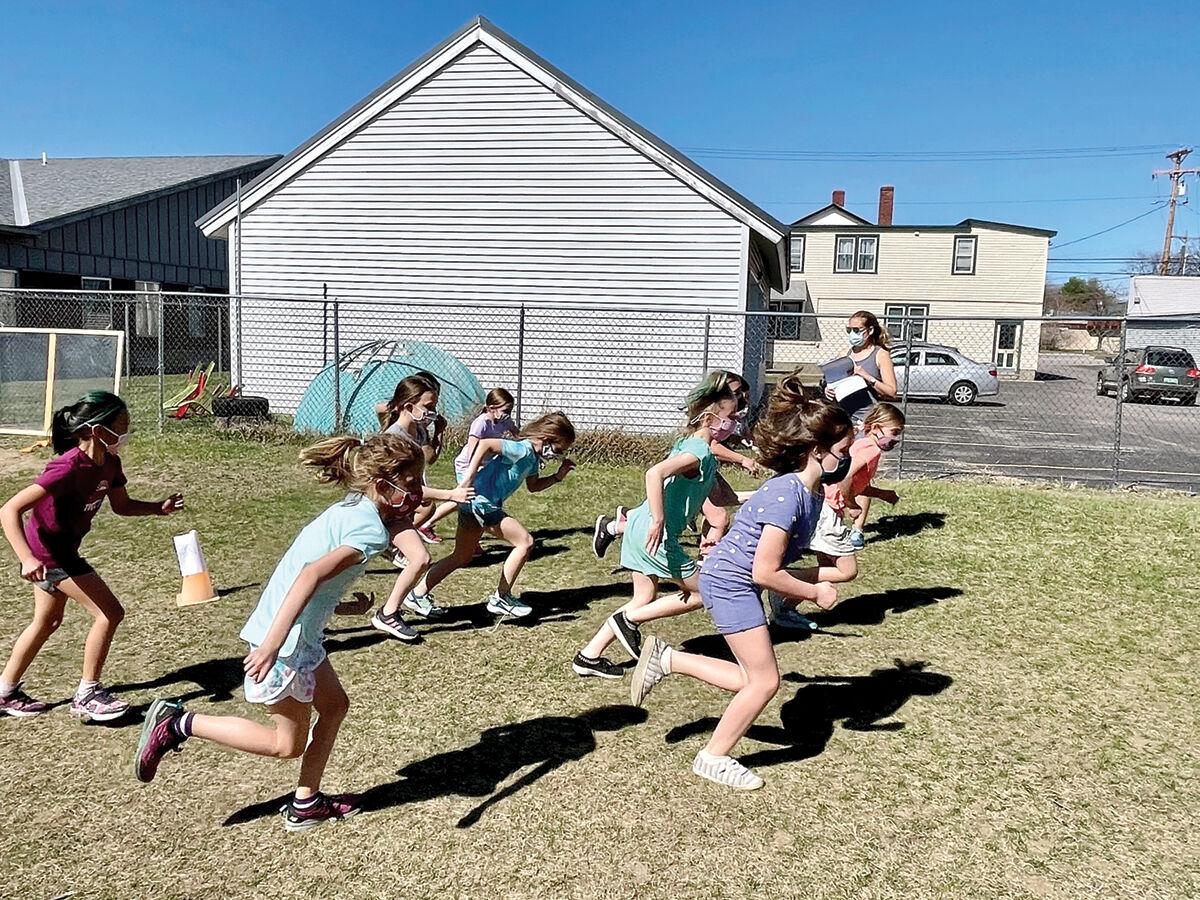 Third-grade Girls on the Run team at Rick Marcotte Central School speed off at a practice with coach Courtney Kutler. 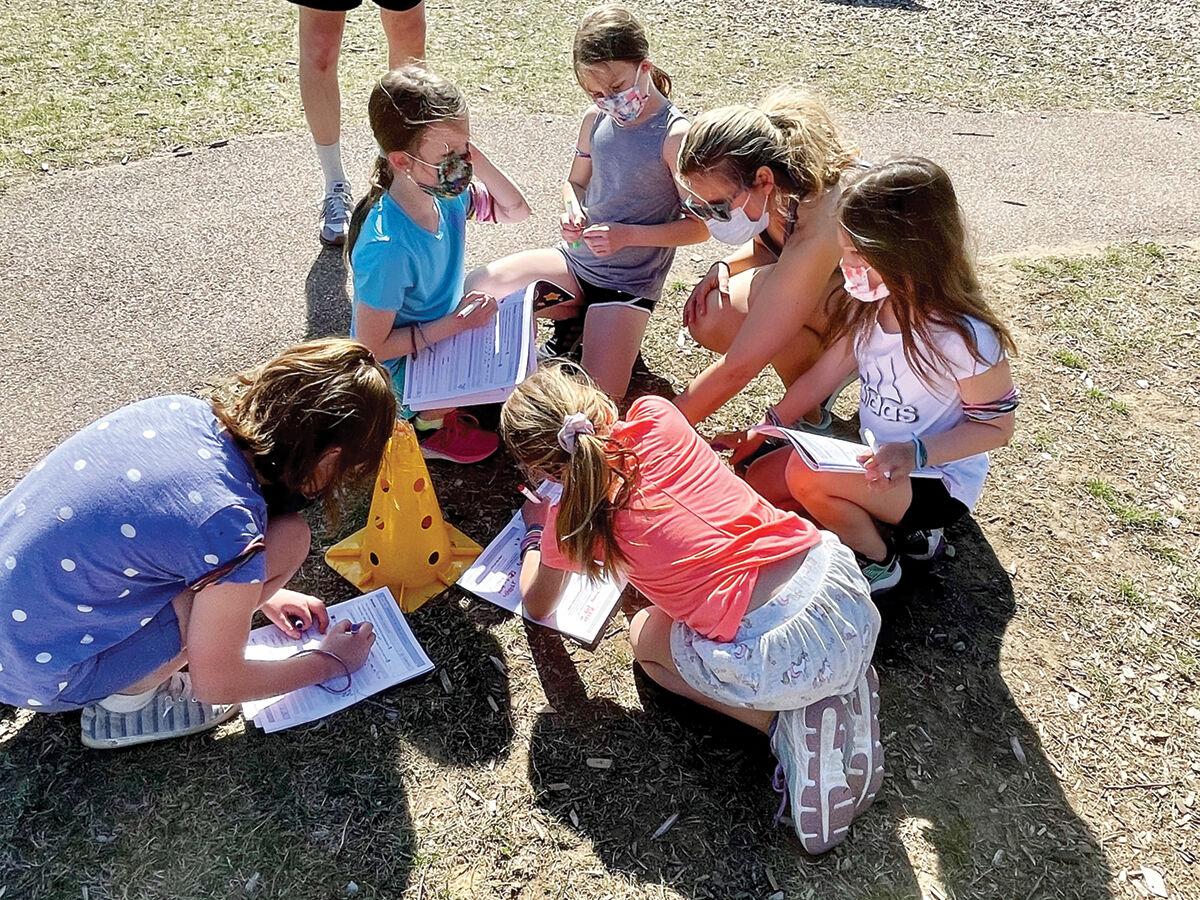 Rick Marcotte Central School third graders take a pause from exercise to reflect and write in their workbooks. 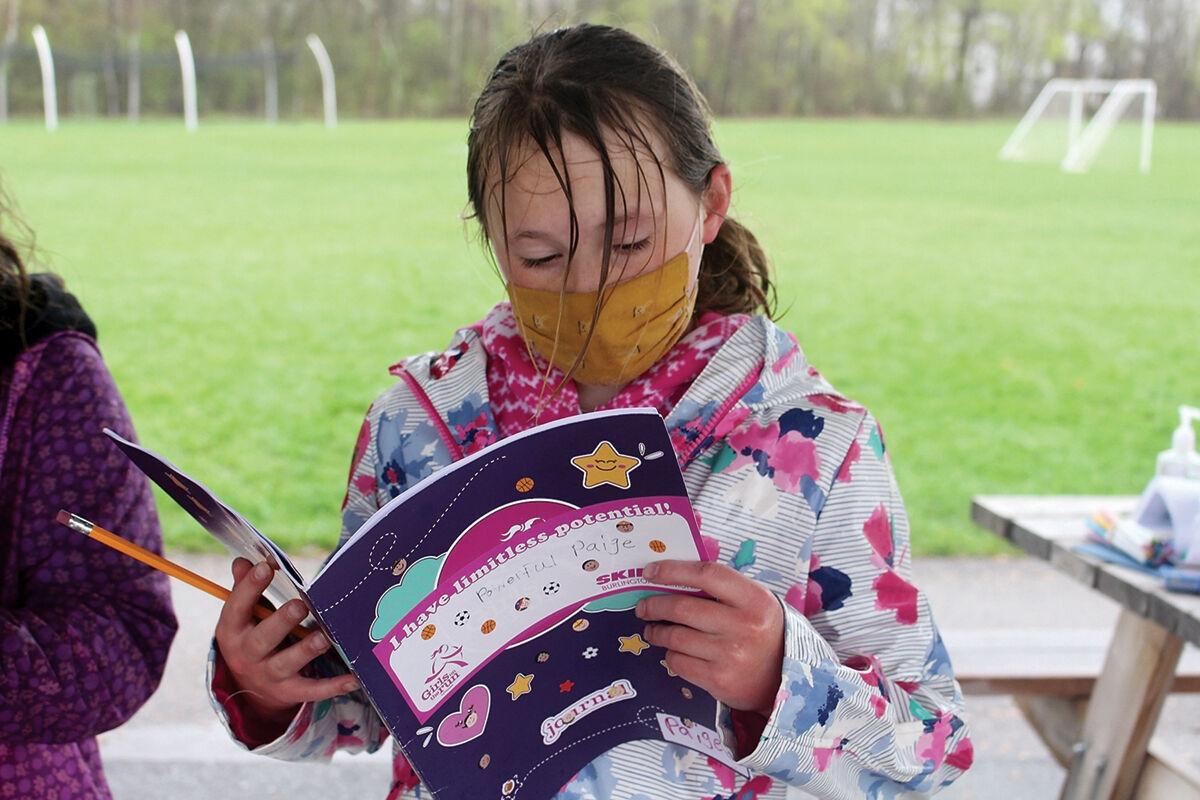 Students on the Shelburne Community School team learn about confidence building and mindfulness in between physical exercises at a rainy Girls on the Run practice.

Fifth-grade Girls on the Run team at Gertrude Chamberlin pose in their new team shirts winged by coach Sharon Davis, at right, and coach Brianne Williamson, left, who is also a school resource officer.

Third graders at Rick Marcotte practice their laps during a Girls on the Run practice.

Third-grade Girls on the Run team at Rick Marcotte Central School speed off at a practice with coach Courtney Kutler.

Rick Marcotte Central School third graders take a pause from exercise to reflect and write in their workbooks.

Students on the Shelburne Community School team learn about confidence building and mindfulness in between physical exercises at a rainy Girls on the Run practice.

A gaggle of fifth graders fell over each other laughing, chatting and stretching in the grass behind Gertrude Chamberlin School on a warm May afternoon. Some donned scrunchies, others neon sunglasses, but all wore bright blue matching shirts emblazoned with the words, “Girls on the Run.”

Launched in the mid 1990’s, the national Girls on the Run program combines physical exercise and discussions around social-emotional wellness to foster care and compassion in young girls, according to their mission.

Last year, all programming in Vermont was canceled due to the pandemic, but this spring, about 1,050 kids joined teams across the state, including at Rick Marcotte Central and Gertrude Chamberlin schools in South Burlington.

The combination of physical activities framed around social-emotional skills and confidence-building is the key to the program, said executive director Rachel Desautels.

“The fact that they are moving their bodies and learning to appreciate fitness is a huge component of the success of girls in being happy, well-adjusted and self-confident,” she said.

One example of a popular activity the kids play is called Emotion Detectives, said Desautels.

“The coach will give you three different clues and after each clue, you have to run, come back and do some kind of activity like 25 jumping jacks or something and then they’ll get the next clue and run down and come back,” explained Desautels. “At the very end, the girls collectively have to say what emotion identifies with those three clues.”

About 200,000 girls participate in local chapters across the country every year. In a typical year, between 2,500 to 3,000 girls across the state of Vermont sign up, Desautels added.

“Last year we had to cancel our season, which was so sad,” she said. But this spring the kids returned, masked up and ready to run. Emotional well-being is important for growing kids, now more than ever, since the COVID-19 pandemic disrupted school, activities, sports, socializing and more, Desautels said.

According to a state study released last February, 70 percent of youth reported that the pandemic made their anxiety, mood or loneliness “a little” or “a lot” worse; and 38 percent said they “felt difficulties were piling up so high that they could not overcome them sometimes or often in the past month.”

“It’s been tough for these kids; they’ve lost so much,” said Desautels. “I mean they’re out there and they’re running around, and you can see the smile in their eyes with the mask on — you know they’re enjoying themselves.”

Molly Fontaine, a fourth-grade teacher at Shelburne Community School and a first-time Girls on the Run coach, enjoys helping her students with new challenges and seeing them excel outside of school. It’s even more rewarding when they bring what they’ve learned into the classroom.

“It’s really great seeing them apply those strategies in the school day. They talk about things they’ve accomplished, they’re proud of themselves — they really internalize it,” said Fontaine.

Courtney Kutler, third grade coach at Rick Marcotte Central School in South Burlington, is also a first timer this spring. One of the many reasons she wanted to join the program was because of the wealth of positive feedback she’s heard from Girls on the Run alum, many of whom are still running.

“There are girls that come back after doing it when they’re kids wanting to volunteer just because it made such a difference in their lives. I knew it was something special,” said Kutler. She is also a parent of a third grader in the program and a professional running coach.

“I think doing a lot of team-building and all the social emotional curriculum that we go through really helps unify them as a team and motivate them to push their own limits,” she added.

And the kids do not have to run the whole time. Other forms of movement, from skipping to hopping, are also encouraged, said Desautels.

“They walk or run or skip — as long as you’re moving your body in a joyful way,” she said.

Aside from running and working through social-emotional lessons, the kids also take on a community impact project and raise money for the Girls on the Run scholarship.

The fifth-grade team at Gertrude Chamberlin, for example, set out to give back to service animals in South Burlington. Other projects have included community gardening or making something for seniors in the community. In that, the girls learn about gratitude and what it means to be a good community-member.

The scholarship drive allows Girls on the Run to provide financial assistance to “anybody that needs it,” added Desautels, and brings the price down. The program charges participants $100 to join, but it truly costs over double that amount.

“We subsidize every single girl from the get-go,” said Desautels. “If you can pay $20, then that’s what you’ll pay; we would never turn a girl away.”

In a few weeks, teams across the state will run a 5k joined by a buddy of their choice — one goal they’ve been working toward all spring.

“They’ve worked out hard this season and this is like their victory lap,” said Kutler. But the goal isn’t competition. Instead, emphasis is placed on support for fellow teammates and on personal progress.

“It’s more about, did you complete more laps than you did at last practice? And are you making progress? Or, it was really hot today, I’m proud of you for continuing to push through,” she explained. That’s one aspect Kutler especially loves.

During activities, if some girls are walking or running slower than the others across the finish line, Kuttler said they start cheering, “You can do a great job! You’re almost there! You’ve got this!”

One thing’s for sure: whether skipping, hopping or walking, girls run the world.