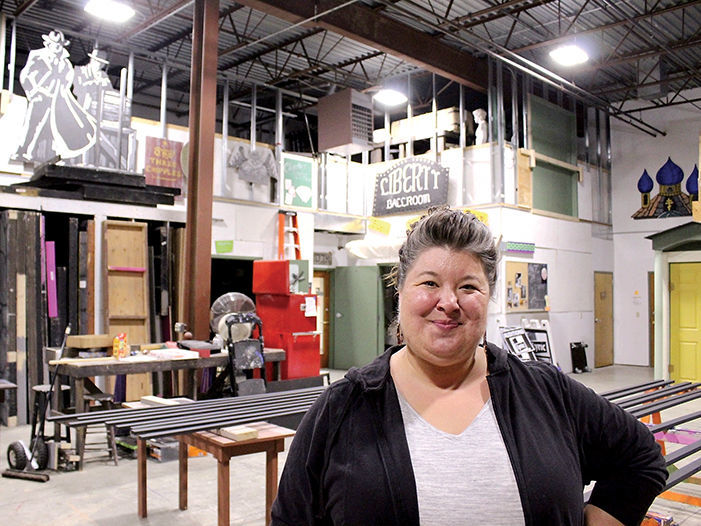 New executive director Erin Evarts guides a tour of Lyric Theatre Company’s new permanent home, stopping in their scene shop. Now, ‘Rent’ is merely a musical and does not refer to their housing situation. 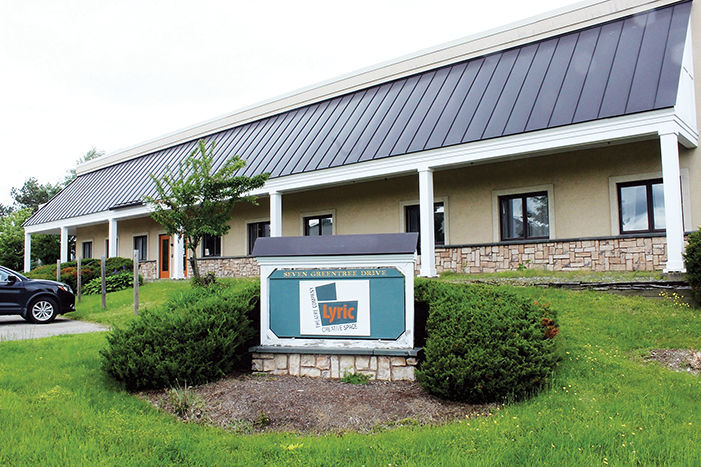 New executive director Erin Evarts guides a tour of Lyric Theatre Company’s new permanent home, stopping in their scene shop. Now, ‘Rent’ is merely a musical and does not refer to their housing situation.

For 45 years, Lyric Theatre Company has relied upon the kindness and efforts of volunteers.

Having recently completed a $1.4 million capital campaign and purchased a permanent home, Lyric Theatre now is ready to fly – figuratively, and sometimes literally.

New executive director Erin Evarts said last year that more than 400 volunteers worked on Lyric productions, more than 100 of which were actors – all unpaid. The support staff consists of only three. In addition to Evarts, there’s development and marketing coordinator Ryan Addario and office manager Doris O’Brien.

“One of the most interesting and humbling things about Lyric is that everybody does it on top of their real job,” Evarts said. “Nobody’s getting paid.”

What do volunteers get? The opportunity to practice and learn the craft of theatre and, possibly, the chance to learn to fly, among other skills that might be needed in a production. Lyric has produced 12 shows that involved flying: “Peter Pan” (three times), “Mary Poppins,” “The Wizard of Oz,” “Cinderella,” “Jesus Christ Superstar,” “9 to 5,” “Beauty and the Beast,” “Seussical,” “Oliver” and “Les Misérables.”

“How many people who have come through Lyric, that were dancers, but they never learned how to tap dance?” said Evarts. “Sometimes, people learn how to tap when they do a show with us.

Besides the obvious theatre skills that people learn, like acting, costuming, prop construction, set building or lighting, other skills people might learn are sword fighting.

She offered the example of ‘La Cage aux Folles,’ “when male actors had to learn how to walk – and dance – in high heels.”

Evarts has walked the volunteer walk that she talks so reverently about. The first show she worked was as a backstage costume helper when she was 15. The show was “Crazy for You” and she was soon crazy for  Lyric. That was 20 years ago.

Home was Shelburne when she was in high school at Champlain Valley Union High School, and then Hinesburg when her parents built there while she was at Emerson College in Boston, but Lyric became, and has remained, her theatre home.

Even during college, she always came back to see Lyric shows.

Evarts’ earliest theatre memories are directing siblings, friends and neighbors in puppet shows and plays in her grandmother’s backyard in Shelburne.

While doing school plays in the fifth or sixth grade, she realized that she wanted to work in theatre.

“She was an amazing influence on me and so many other students at CVU,” Evarts recalled.

She got the opportunity to do costume design, stage management and be assistant director on shows under Fawcett’s guidance.

“I got to learn so much about theatre from Robin,” said Evarts. “She was the one who really pushed me to all the different sides of theatre.”

Among the skills she’s practiced at Lyric are costuming, hair design, quick change, makeup, kid wrangling (making sure that younger actors are cared for, that they change their costumes on time and are ready for their entrances), producing and directing.

“There have been years when I had 700 hours of volunteer work, and I’ve had years where I’ve come in for maybe 15 hours and just helped in a small capacity or stood at the membership table,” she said.

Although Evarts has worked with professional theatres with short rehearsal periods, she is not unique among the people who work with Lyric.

“Almost everybody who works at Lyric has had professional experience,” she said.

Lyric has members who also have worked for Vermont Shakespeare, St. Michael’s Playhouse, Farm to Ballet, Vermont Youth Orchestra, Vermont Stage and in New York or on national tours.

“If they go away for a season and work with another company and come back, all that does is they’re bringing back a new skill set and a new set of eyes,” said Evarts. “We also have people who have only done this in school or who only do it in their spare time. What I will say about professional versus amateur versus community actors in Vermont, particularly in Chittenden County, is there’s almost no line between them.”

For her, this crossover between different companies is the beautiful thing about this area’s art community.

Part of her mission as executive director of Lyric is making sure volunteers know how valuable their efforts are.

She uses a metaphor for Lyric: “When we take bows, everybody at Lyric bows together ... whether you’re onstage or off.”

However, Evarts said, “I like being a leader. I think the word ‘leader’ implies you’re going towards something. I like being thought of as someone who is working towards a goal.”

How does she think of her role at the theater?

“I think I’m more of a mom, or a fairy godmother. I see myself as somebody who tries to encourage the best in everyone around me. I say, ‘What are you good at? Do what you’re best at and go.’ If you give people the opportunity to do what they love and what they’re good at, you’re going to get incredible gifts back.”

Walking around inside in the props creation room in Lyrics’ new, 14,000 square-foot home, you’ll see that props are already being built for the fall production of “The Addams Family.” Although actors aren’t usually added until about three months before a show opens, work on most Lyric shows begins two years before opening.

Other shows coming this year are “Matilda the Musical” next spring and a collaboration with the Vermont Symphony to present “Burlington Does Broadway” on New Year’s Eve. This year Vermont PBS is also part of the collaboration and the show will be broadcast live from the Flynn Theatre.

One of Evarts’ goals for Lyric Theatre’s future is establishing an endowment.

“Now that we’ve got our building, I really want to set Lyric up for the future,” she said.

Whatever the future holds, Lyric is Evarts’ home and her home is where her heart and her art is.

“Now, Lyric is a place and not just an idea, which I think is special,” she said. “By closing the capital campaign and being in this new home, we’re going to be able to share that with so many more people.”