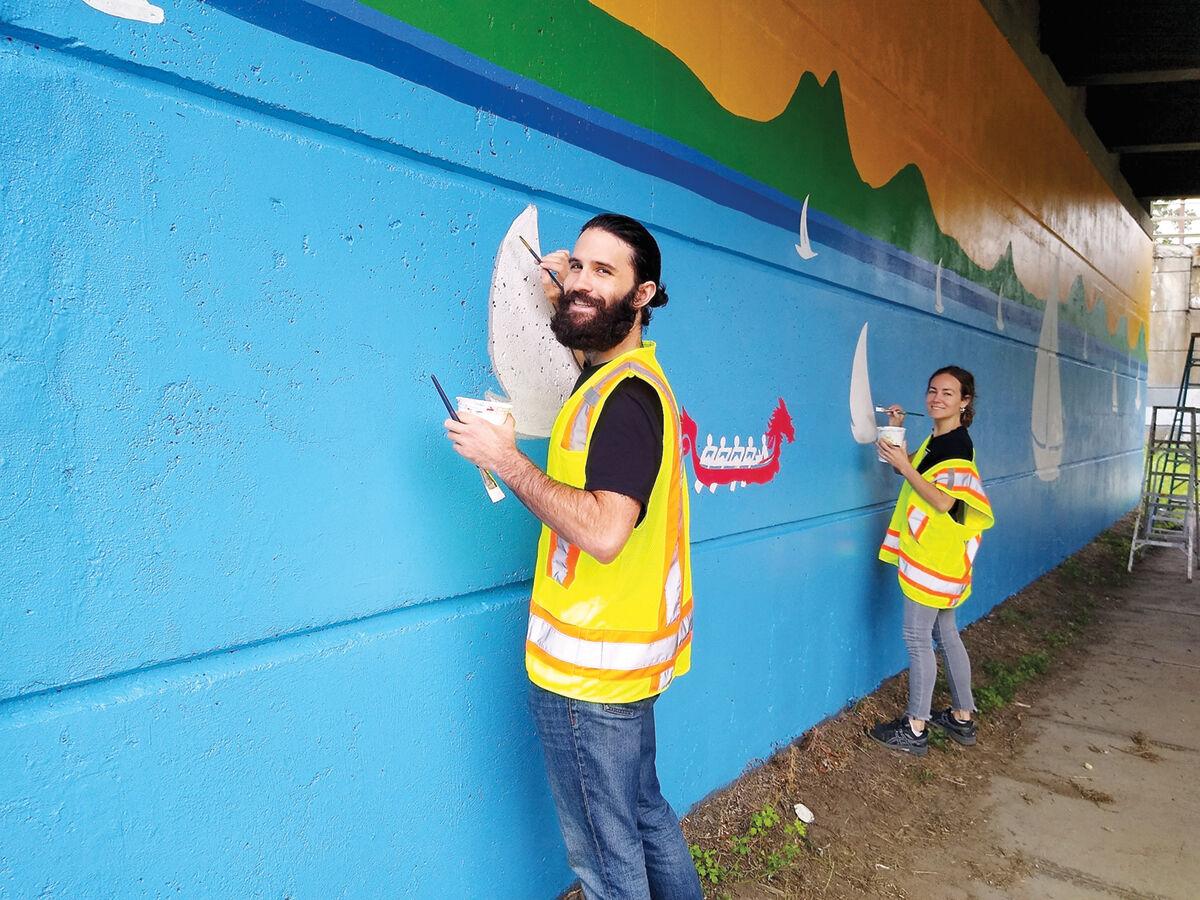 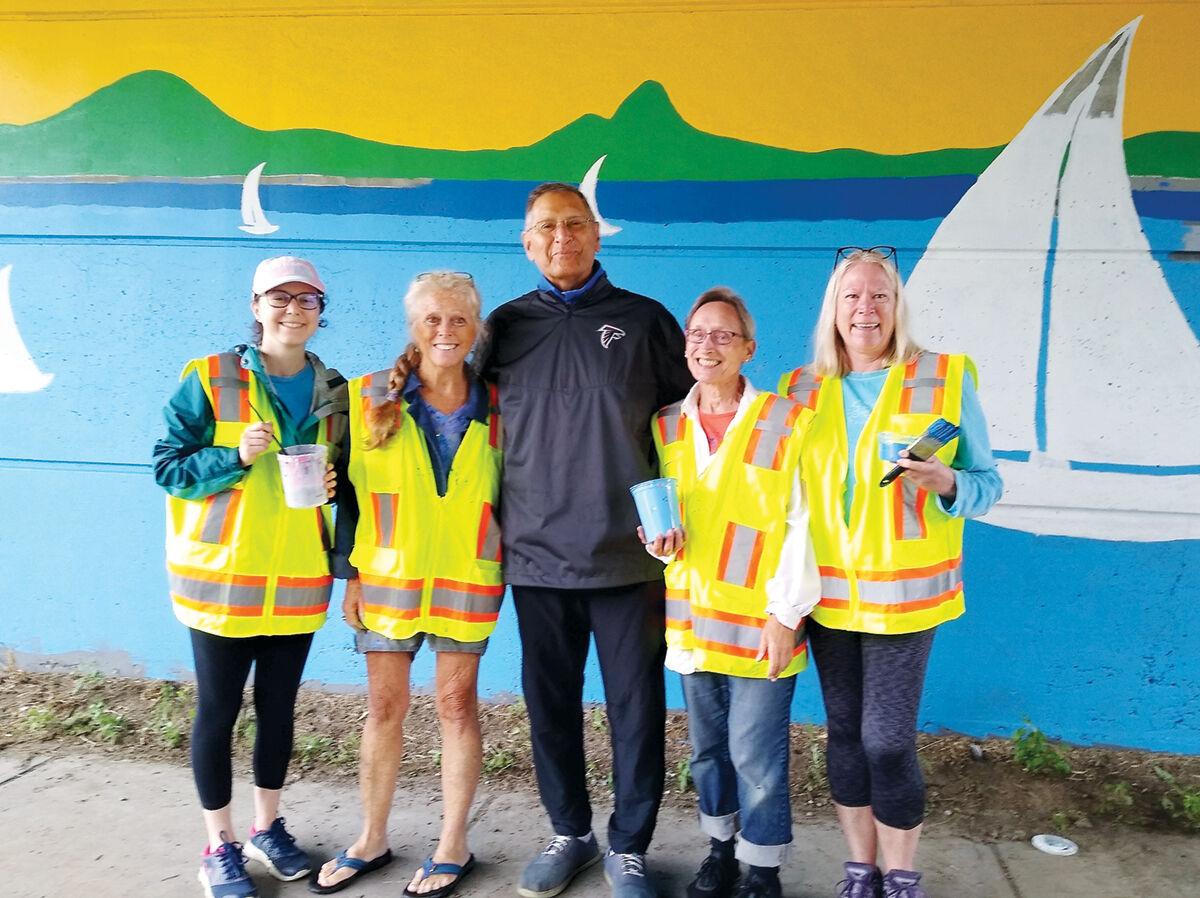 The Sail Beyond Cancer mural emphasizes action, said Stephen Milizia, center, who came up with idea. Residents painted it under the overpass on Farrell Street in August.

The Sail Beyond Cancer mural emphasizes action, said Stephen Milizia, center, who came up with idea. Residents painted it under the overpass on Farrell Street in August.

Steve Milizia insists that the story behind the Sailing Beyond Cancer mural on Farrell Street, which features a deep blue Lake Champlain and a boat powering through the water, is about other people’s stories — he just happens to be in the middle of it.

The 12- by 50-foot mural was finished in just five days on Aug. 25, but the inspiration began with a feeling Milizia had on his first sail on Lake Champlain after he found out he had cancer a few years ago. That voyage blew wind into his sails, he said — he knows it sounds corny — and inspired the lake scene depicted on Farrell Street.

He’s gotten the story down to about 20 minutes, Milizia, of South Burlington, said. This includes the brief tangents that spark his mind as he recalls all of the neighbors, friends and strangers who have woven in and out of his life to bring the mural to life. His eyes brighten as each name bubbles forward, and he breaks off for a moment to recall one of their passions, their hobbies, their favorite sports teams, before looping back to the tale of the mural.

“That’s another story,” he said, over and over; it’s a sweet refrain, giving a peek into Milizia’s deep care and concern for others. Although he insists he “just happens” to be in the middle of the story, it’s clear he belongs at the heart of it.

From concrete wall to public art

Sail Beyond Cancer is an organization that offers an opportunity for folks with cancer to sail with their loved ones. Milizia was moved by the experience, describing it as therapeutic, and began helping on excursions and with fundraising; even acting as an ambassador. He credited Suzanne Johnson, executive director, as the brains and heart behind the cause.

“You don’t feel good on that cancer journey sometimes and to be able to be in a situation that makes you feel great — it’s remarkable. And you want to repeat it, and you want others to feel it too,” said Milizia, whose voice at times swelled thick with emotion.

One of Milizia’s friends he met while sitting for chemotherapy happens to be cousins with Katie O’Brien-Barritt, the unofficial muralist of South Burlington. His buddy is also on the same football team with him but, “that’s another story,” Milizia said.

O’Brien-Barritt is the artist behind most of the painted utility boxes scattered around the city and worked as an art teacher in South Burlington for 30 years. Milizia shared his wish with her: to paint a utility box in South Burlington with his wife and closest friends, inspired by his experience in Sail Beyond Cancer.

She did not have a free utility box for him to paint, O’Brien-Barritt told him, but what about a 12- by 50-foot wall?

It all seemed to come together for Milizia: his vision, the wall, O’Brien-Barritt’s help, the neighbors and strangers who volunteered their expertise. The wall happened to be around the corner from his mother’s old house, and guess who is the head of the department of transportation? Why, Joe Flynn — Milizia’s old friend who he’s known since fourth grade.

“We were always the biggest boys in the class, we always sat in the back together,” Milizia recalled. “That’s another story too.”

Everything fell into place until he and O’Brien-Barritt hit the permitting stage. Their start date dragged out from April 15 into a months-long ordeal. Delay after delay, he and O’Brien-Barritt checked in with each other regularly, but a few months in, Milizia took a break — the chemo had worn off and he wasn’t feeling well.

“That sort of lit a fire under me,” O’Brien-Barritt recalled. She continued working with the department of transportation, she asked deputy city manager Andrew Bolduc to write a letter of support, and once she had all the permits, she put out a call on social media for painters.

Within a day she had 20 replies, she said.

“That’s a wonderful thing about South Burlington is that, if you just ask for a little bit of help, you’ve got all these community volunteers jumping at the opportunity,” O’Brien-Barritt said. She sketched the mural based on a design by resident Phyllis Bartling and the crew took off painting on Aug. 20 using a paint-by-number approach.

For O’Brien-Barritt, the mural bubbles with different feelings: when she looks at it, she feels peaceful and calm, but she is also reminded of people battling cancer and how fast her neighbors offered their help.

One day, Milizia was feeling up for a drive and happened to pass by.

“I drove by, and there was that wall,” he recalled quietly. “It was about two thirds of the way done — these other people that I’ve never met before, they were taking what I had in my mind and my heart, and putting it up on the wall. Just like that. Just like that.”

Written in neat script on the hull of the large sailboat is the title: “Sailing Beyond Cancer.” An action, Milizia emphasized.

South Burlington representative Maida Townsend was one of the volunteers who lent her paintbrush to the mural, even though art is not her strong suit, she said. She volunteered because she saw the mural as a way to lift spirits and send a message.

“Public art feeds the soul,” Townsend said, adding that when she drives past the mural, it makes her pause and pulls her back into the experience.

The mural has also served as the inspiration for the state’s new policy, “Art in the Right of Way,” Milizia later learned from Flynn. The new policy is meant to pave the way for more public art in the community.

When people see the mural, what does Milizia want them to see or feel?

“Hope,” he said. “I want people to know care, love, selflessness, giving. It’s a hug without the physical hug during COVID, that’s for sure. It’s a deep hug, one of those that you’ll carry with you forever.”

He said he’s grateful for all of the people who have “propped me up when I needed propping up,” and he’s eager to see how more public art unfurls with the new policy, bringing paint and hope to other concrete walls like the Farrell Street underpass.

But that’s another story.