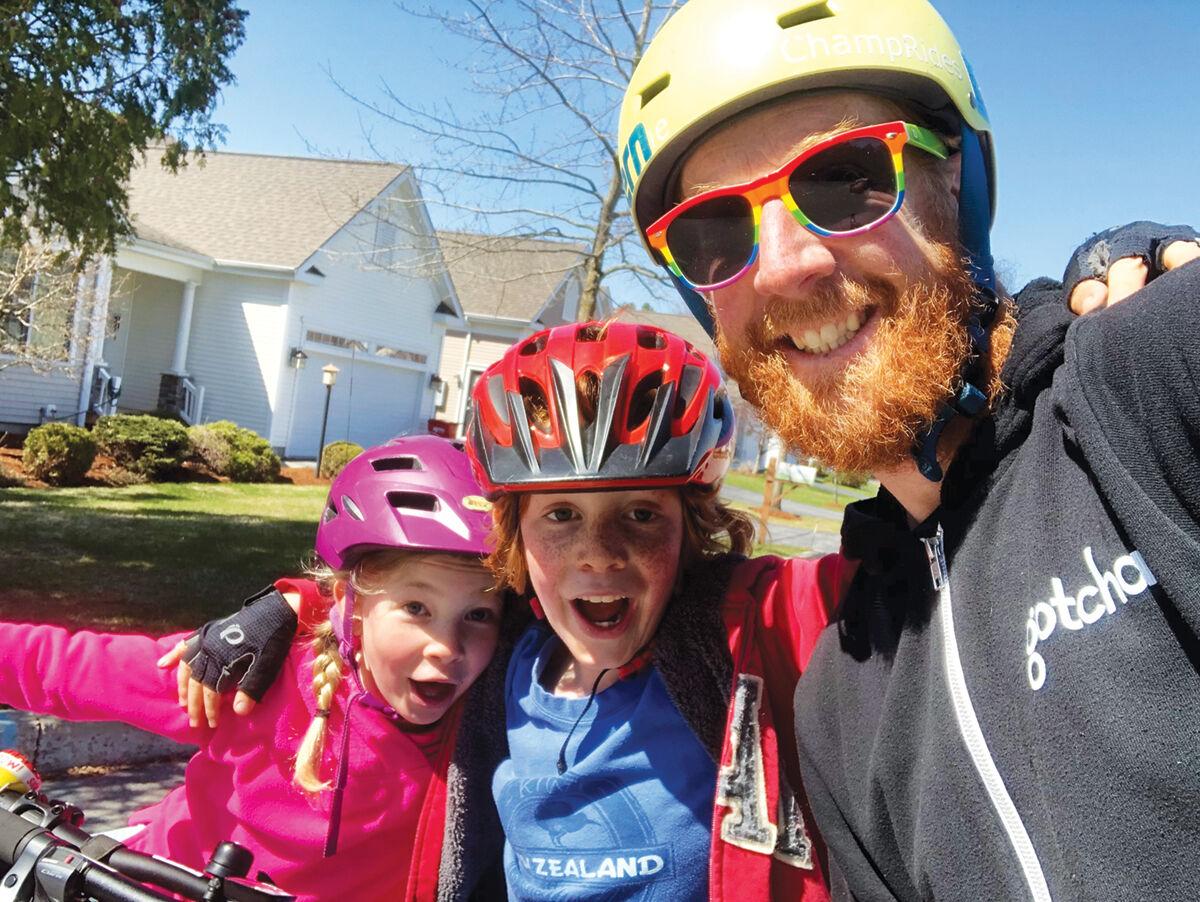 From left to right, Cora, 7, Sage, 9, and Nic Anderson take a picture together during their 30 days of biking excursion. Their rides began as a commitment to bike each day in April, and soon transformed into a quest to bike down each street in South Burlington. 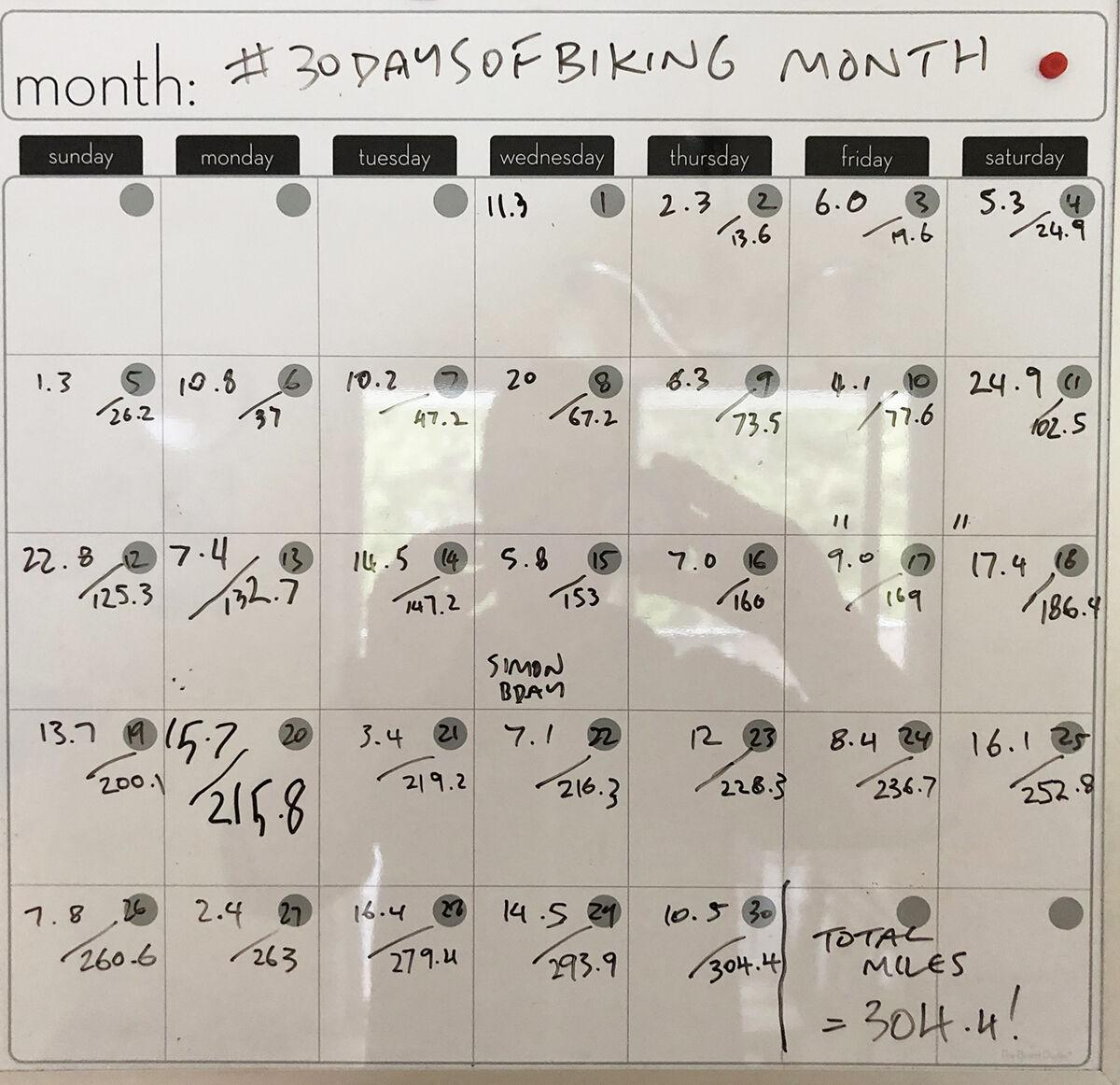 A calendar the Andersons used to log the daily mileage of their bike rides.

From left to right, Cora, 7, Sage, 9, and Nic Anderson take a picture together during their 30 days of biking excursion. Their rides began as a commitment to bike each day in April, and soon transformed into a quest to bike down each street in South Burlington.

A calendar the Andersons used to log the daily mileage of their bike rides.

April 1 was a great day for a bike ride.

Or maybe it wasn’t.

In the Anderson household, it was definitely a great day for a bike ride – so was the rest of the month for that matter. Over the course of 30 days, South Burlington Bike and Pedestrian Committee member Nic Anderson, his 9-year-old son Sage and his 7-year-old daughter Cora rode their bikes down every street in South Burlington.

There are about 90 miles of road in the city, according to Public Works Director Justin Rabidoux. Logging 304.4 miles on bike, the Andersons made their way down each South Burlington street – and then some.

The trip began as the Anderson’s celebration of “National Bike Month,” an annual event encouraging people to get out and ride every day for one month, Anderson said.

The patriarch is no stranger to biking, he rides to work most of the year. But with coronavirus grinding most things to a halt, the extra time in his kids’ schedule allowed them to join in on the month of riding.

About 10 days into the month, the trio realized they had traversed about half the streets in South Burlington.

So, they kept going.

“My son, Sage, is a total map nerd, which is near and dear to my heart too,” Anderson said.

After each ride, Sage would pull out a map of South Burlington and mark all the roads they’d ridden.

“He was like, ‘Okay, we’ve got a Sharpie there, there and there but that one’s missing,’” Anderson recalled. “So, we’d go on a specific bike ride to try and get it.”

He dubbed the practice “street hunting.”

And the hours spent biking proved to be a great bonding experience.

“Oh my God, the random conversations you get into about everything when you’re riding around on a bicycle,” he said.

Biking is one of the most social activities, he said, especially on quiet roads where people can ride next to each other.

“If you’ve got kids, when you’ve got two of them one’s always grumpy. One of them can be in the front or the back, while you chat with the other one,” he joked.

For Sage and Cora, the rides became a quasi-tour of the city’s architecture. Anderson’s love of biking grew during the experience.

“It’s just all about the quality time, it doesn’t matter if you’re doing a 5-mile bike ride or a 20-mile bike ride as long as you’re getting out and getting fresh air and enjoying the city with your kids,” he said.

And he’s confident the ride will help during his next term on the city’s Bike and Pedestrian Committee. Seeing every road in South Burlington by bike provides context for when people are talking about different parts of the city, he said.

The Andersons were most surprised to see first-hand just how linked South Burlington is.

“There are actually tons of really cool paths and connections between neighborhoods,” Anderson said. “It kind of solidified the fact that South Burlington’s bike network is pretty dang amazing.”

He hopes to use what he’s learned on the ride to help create greenways – signed, mapped and promoted routes – to help South Burlington students to bike to school through neighborhoods.

As for the Anderson kids? Well, Sage already has circles on his map outlining where he’d like the family to bike next.