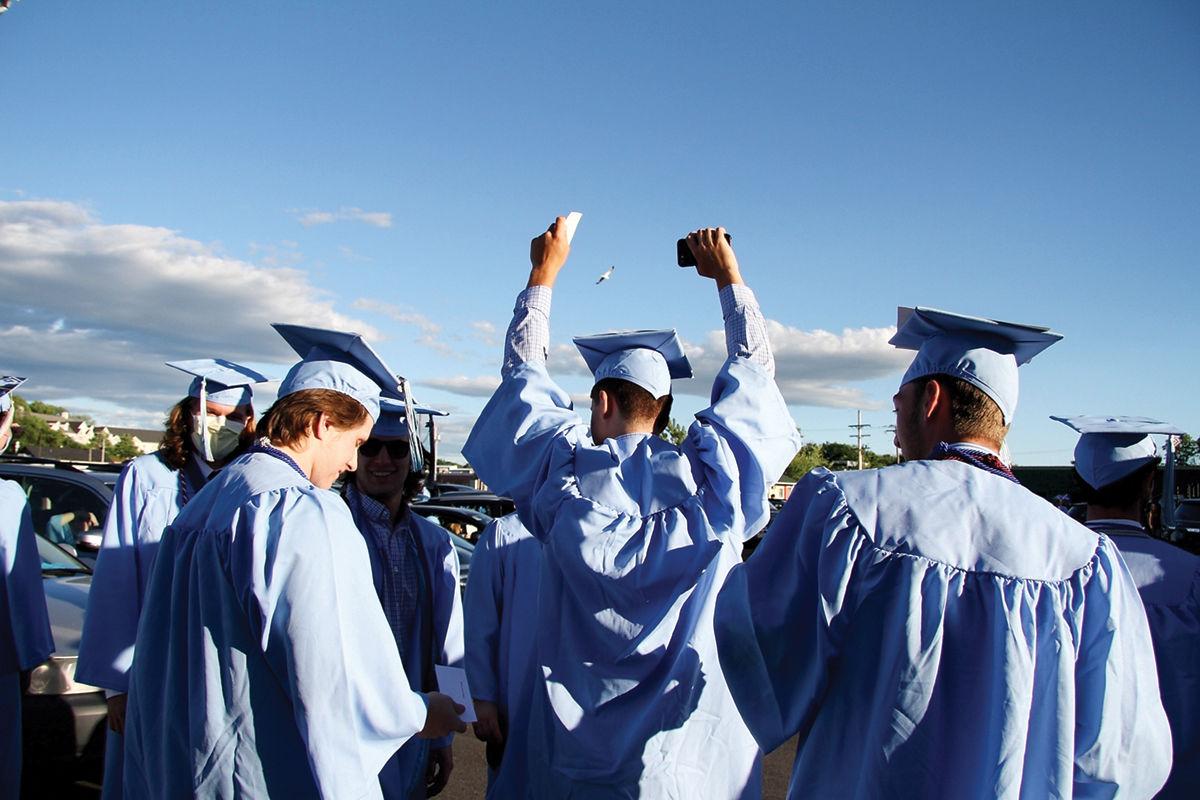 Seniors get excited as they wait to cross the stage during their unorthodox June 12 graduation. 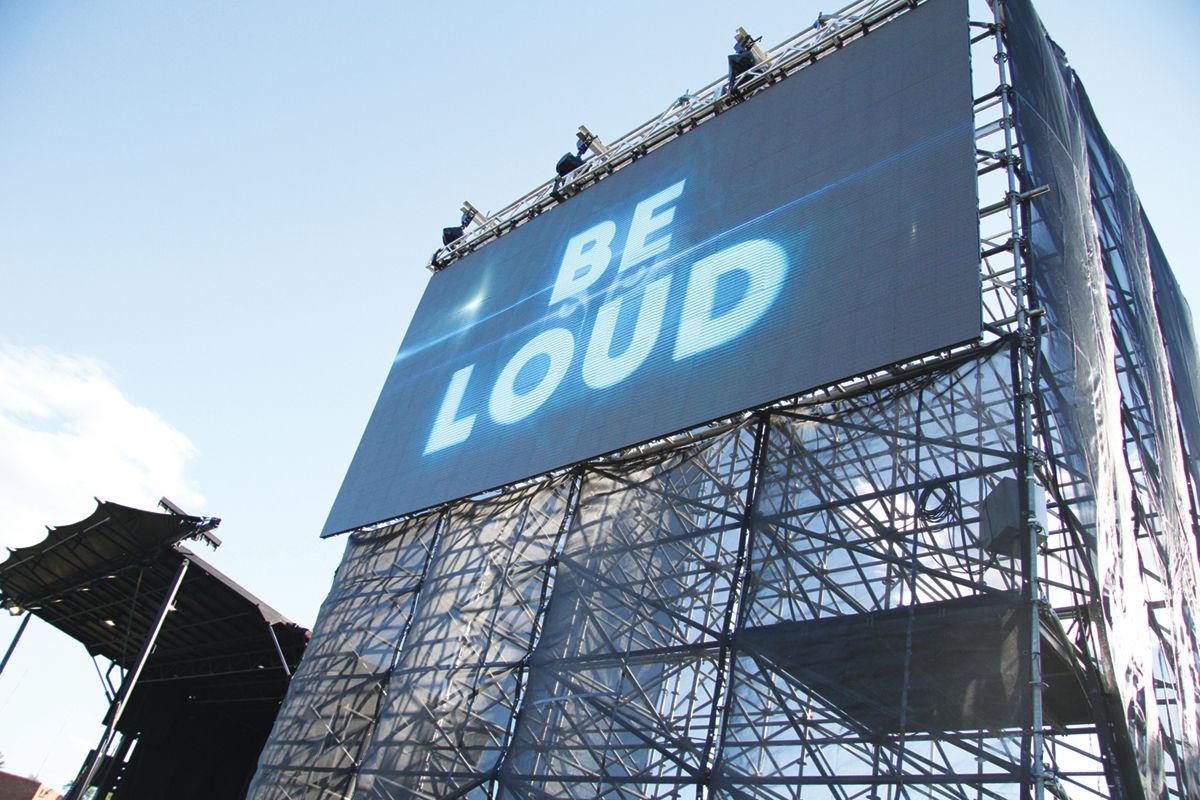 They came. They saw. They honked.

Seniors get excited as they wait to cross the stage during their unorthodox June 12 graduation.

They came. They saw. They honked.

Before the students – making up one of the largest classes in the district’s history – stepped foot onto the campus at 550 Dorset St., Principal Patrick Burke and staff had been told that they were loud.

It was that joy that set them apart – the class had a knack for balancing the serious side of academics with “appropriately timed irreverence,” he said.

Burke added that seniors have the power to set a tone, which at times can be challenging if the class is one growing tired of high school. But with this class, the enthusiasm, acceptance and eagerness to help out, set a positive example that underclassmen followed.

While many classes incorporate service into their high school experience, the class of 2020 took volunteerism “to another level,” Burke said. It wasn’t hard to amass a large group of seniors to volunteer, even at the last minute, he said.

School’s out, but diplomas aren’t

“It wasn’t all that we would have liked in terms of bringing the kids back together. But I think it was pretty amazing considering the short amount of time there was to plan, as well as the ever-changing limitations that we were under,” Burke said.

It may have been an unusual one, but the students deserved a ceremony, he said.

Onlookers took notice when a number of students crossed the stage without wearing a mask. Students were permitted to take their masks off for the crossing, Burke said.

Although students walked the stage, they have yet to receive their physical diplomas. The factory that prints the diplomas and makes their cases was shut down due to the pandemic and is now catching up on orders. Burke said the diplomas will be mailed to students.

Students are also awaiting their yearbooks, which had to be sent back to the factory after school staff noticed some pages had been printed more than once and people had been misidentified, Burke said.

There are two major yearbook producers in the U.S. and the company that makes yearbooks for South Burlington had to close its factory during the pandemic, reopening just recently, he said.

“It’s the first time this company we’ve been dealing with for years has ever had those kinds of mistakes. It’s obvious it just kind of came out of their haste and their efforts to try to get these to the kids in a timely way,” Burke said.

Students will receive their books once the updated copies have been sent to the high school.

On a sunny and windy Friday, the seniors donned their baby blue robes, hopped in their cars and headed for a drive-in graduation at the Champlain Valley Exposition.

The long line of cars snaked its way from the high school on Dorset Street all the way to the fairgrounds in Essex Junction, where students parked in rows before a stage for the June 12 ceremony.

Honking took the place of the usual thunderous applause of graduation, and masks covered some students’ faces – but not all.

It was an undoubtedly different commencement ceremony, but still a celebration of the students’ public education achievements.

Alongside the usual student and faculty speeches were new pre-recorded videos offering congratulations and reflections–and minimizing the number of people on stage. Themes of challenge and uncertainty ran throughout the graduation remarks.

“This past semester was supposed to be a victory lap after four years of hard effort. But coronavirus ended all of those dreams,” senior Ragulan Sivakumar said in his welcome address.

He shared how life is hard and that students will face many challenges as they make their way in the world. The key to navigating those trials, he said, is persistence.

“Persistence is more than just not giving up. It’s about not taking the easy way out. Persistence is something we’re going to need to get through these tough times,” Sivakumar said.

Fellow graduate Ryan David Anderson spoke to how quickly seniors’ thoughts shifted from graduation to a new way of living – during the pandemic.

“Despite the shock and disappointment some good things have actually come out of all of this,” Anderson said. “We’ve realized that what we can control is within us.”

Anderson told his peers that adaptation would be an important part of succeeding in life.

“If we are capable of innovating and adapting in this situation then we’ll be able to face anything that comes our way,” he said.

Faculty speaker, District Activities Director Michael Jabour, told students to surround themselves with positive influences, be present and have meaningful interactions with people. And, in jest – to do the opposite of what they saw in Tiger King.

“You are all champions because you surpassed expectations and against all odds you fought through adversity to be where you are today,” he said.

As the graduates go out into the world and explore their own paths, Burke hopes they never forget the difference they can make.

“Don’t underestimate your ability to foster change. Be engaged and make the change you want to make,” he said.

Following award recognitions, the students filed up to the stage in groups of about 20. They received their diplomas and headed back to their cars.

“Our experiences have made us strong. We are ready to take on our futures so long as we continue to educate ourselves on important matters, to listen to those who are trying to speak, to understand what they have to say and to act accordingly,” Shah said.

South Burlington High School had a graduation like never before on Friday, June 12. Many decorated their caps with hints of their next steps. …