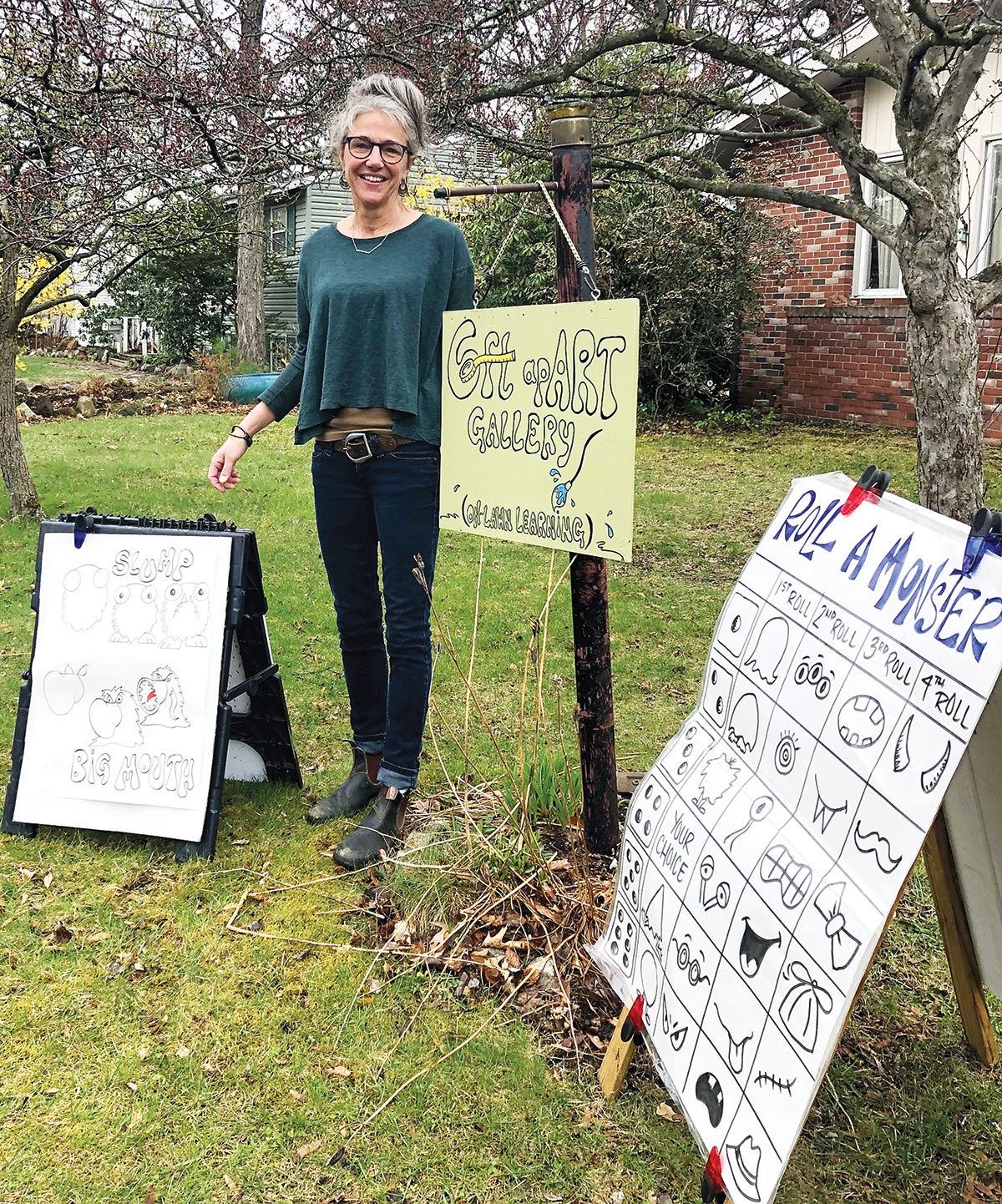 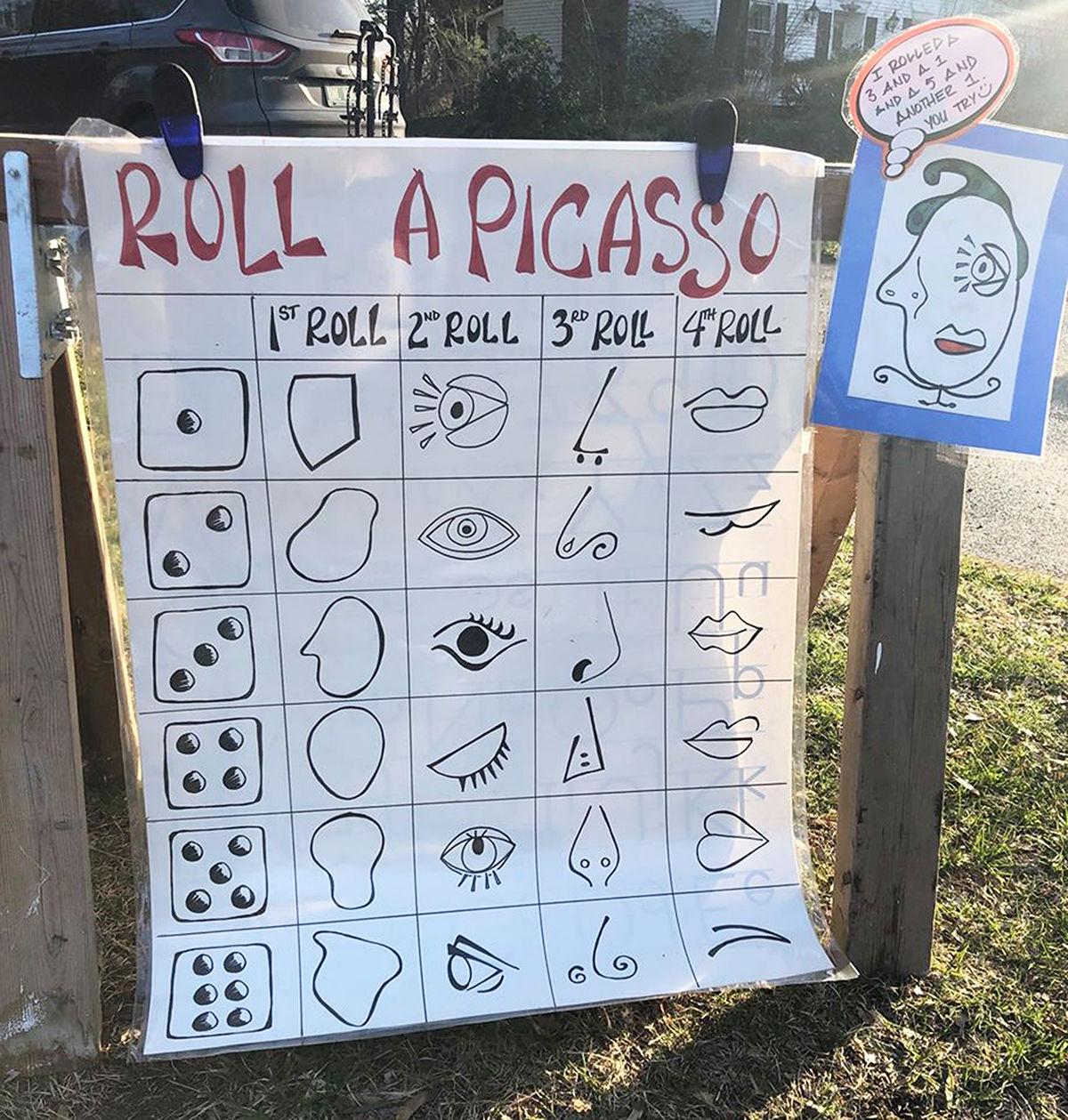 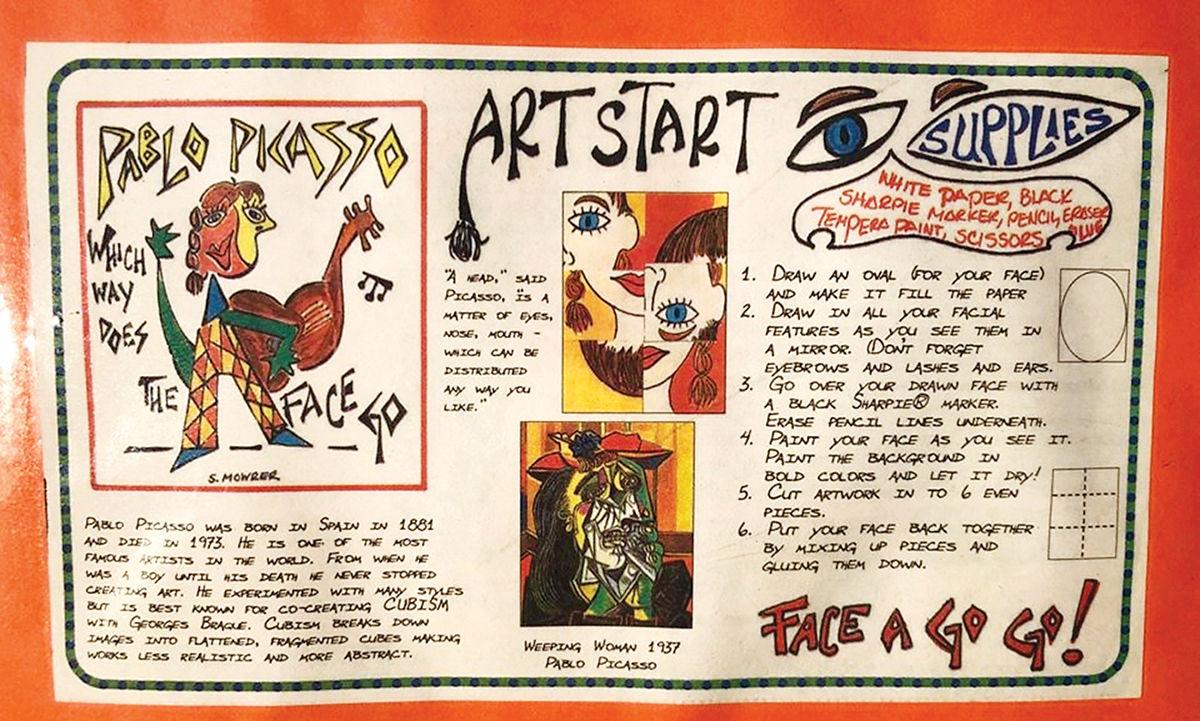 Artist Sue Mowrer Adamson found herself “climbing the walls” while sheltering in place. After trying to keep busy doing projects with her two teenage children, the Orchard School art teacher turned to what she does best – engaging people with her take on art history and technique.

Mowrer Adamson created the “6 Feet apART Gallery of On-Lawn Learning,” a public art space that has brought cheer and the power of expression to neighbors near and far – right on her front lawn.

“When the coronavirus shut down schools with little warning, I could not reach enough kids and certainly not in the interactive, silly way I was used to,” said Mowrer Adamson. “Art lifts spirits. I put out works that I hope will make people smile, think and perhaps create something in this isolating time.”

Her “On-Lawn Gallery” features an evolving display of art lessons. Recent exhibits included a piece on the early 20th-century movement of cubism which included the teaching rhyme, “Pablo Picasso / Which way does the face go?” and another focused on American artist Keith Haring and his pop art and graffiti-like work. Mowrer Adamson’s rhyme for learning about this artist was “Keith Haring / Bold, bright and daring.”

Mowrer Adamson first came up with the idea of teaching others through humor and verse during graduate school at Saint Michael’s College. Rhymes like “Georges Seurat liked to dot a lot” and “Vincent van Gogh made the ‘Starry Night’ glow” were a perfect fit for her background in cartooning. Over the years, her quirky and engaging sense of humor found further ways of expressing themselves

In the early 90s, the artist spent time at the Burlington Farmer’s Market. While her friend was selling vegetables, Mowrer Adamson made funny illustrations using puns for the stand’s display. From there, she started a greeting card company called Pun Intended. Her wares were available in stores around the state.

“They kind of took off,” recalled Mowrer Adamson. “I did a stationary show at the Javits Center [New York City] in 95. Small fish in a huge pond. I decided I did not like the business and marketing end of things, so I kept it local. I still have stock and some loyal customers are still buying them.”

After a writing a column in “KidsVT” titled Art Start in 2004/2005, Mowrer Adamson had positive feedback from homeschooling parents and 12 art-lesson plans ready to go. In addition, the enterprising artist also created a manuscript/picture book which she shopped around to publishers.

“My dummy [manuscript] was a huge effort and it was getting good response back in the day,” said Mowrer Adamson. “I was in The Society of Children’s Illustrators and Book Writers, went to lots of retreats and conferences. It was becoming like a full-time job.”

Lucky for local children, Mowrer Adamson reevaluated her plans and decided to focus less on publishing and more on her teaching career. She teaches art part time at Orchard School, but under current circumstances, she instructs second through fifth grade through Google Classroom and kindergarten through first grade through folders shared with teachers.

Before schools closed, she was plotting an afterschool cartooning class.

“I miss my students terribly,” she said. “I want to make them smile, laugh and let them know I’m here for them.”

She has been posting new items on her lawn a few times a week, encouraging artists of all ages to express themselves.

“Today a crew brought supplies and a blanket and just drew in my yard for over an hour. This is what it’s all for. Seeing smiling faces and watching kids totally engrossed in art, well, it’s an art teacher’s dream come true,” she said.

On Wednesday, Lamoille Valley Transportation of Morristown joined hundreds of motorcoach companies around the country for a rolling rally arou…