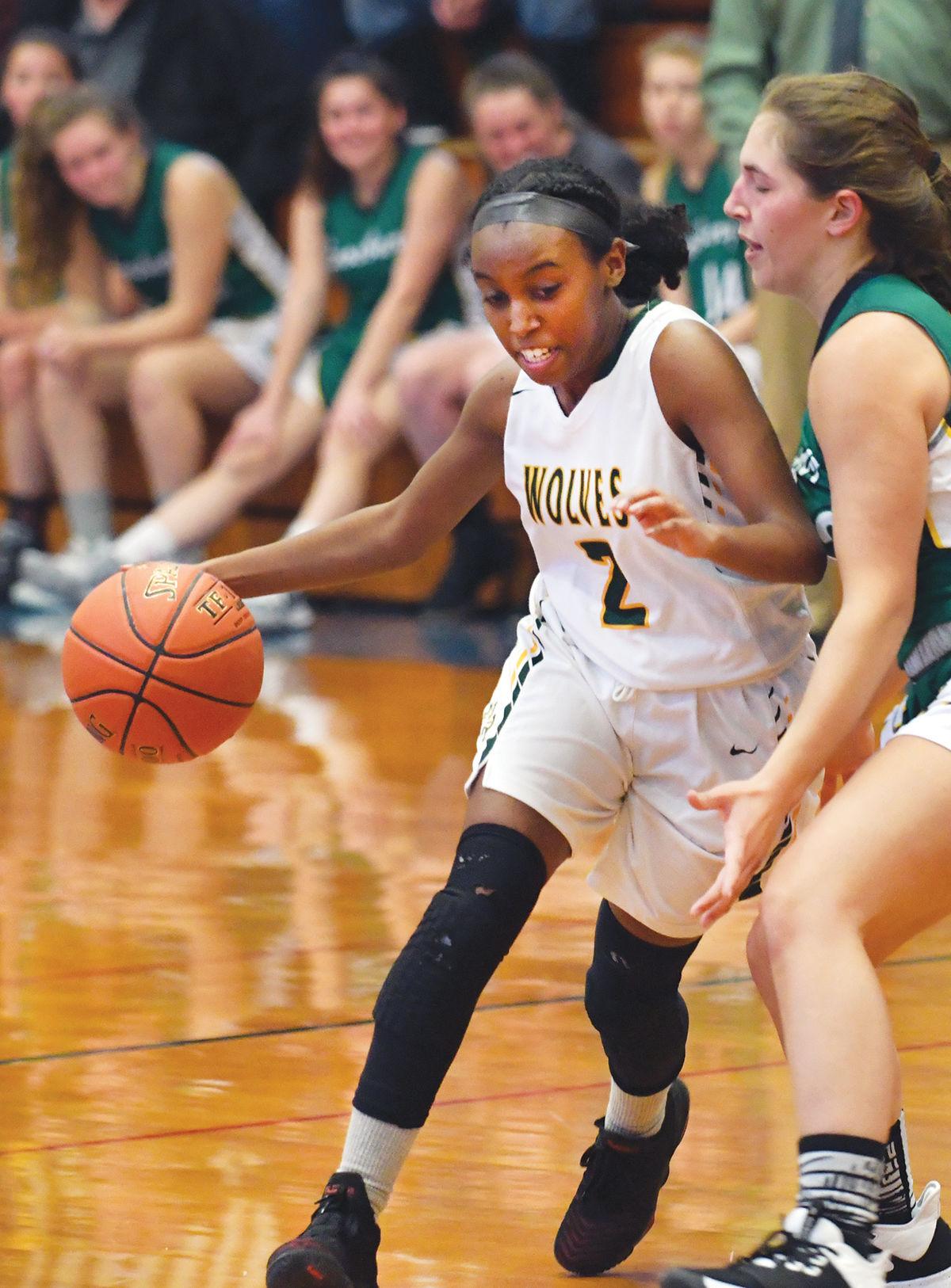 Peoples Academy’s Melania Fogg drives in a game against Enosburg earlier this season. 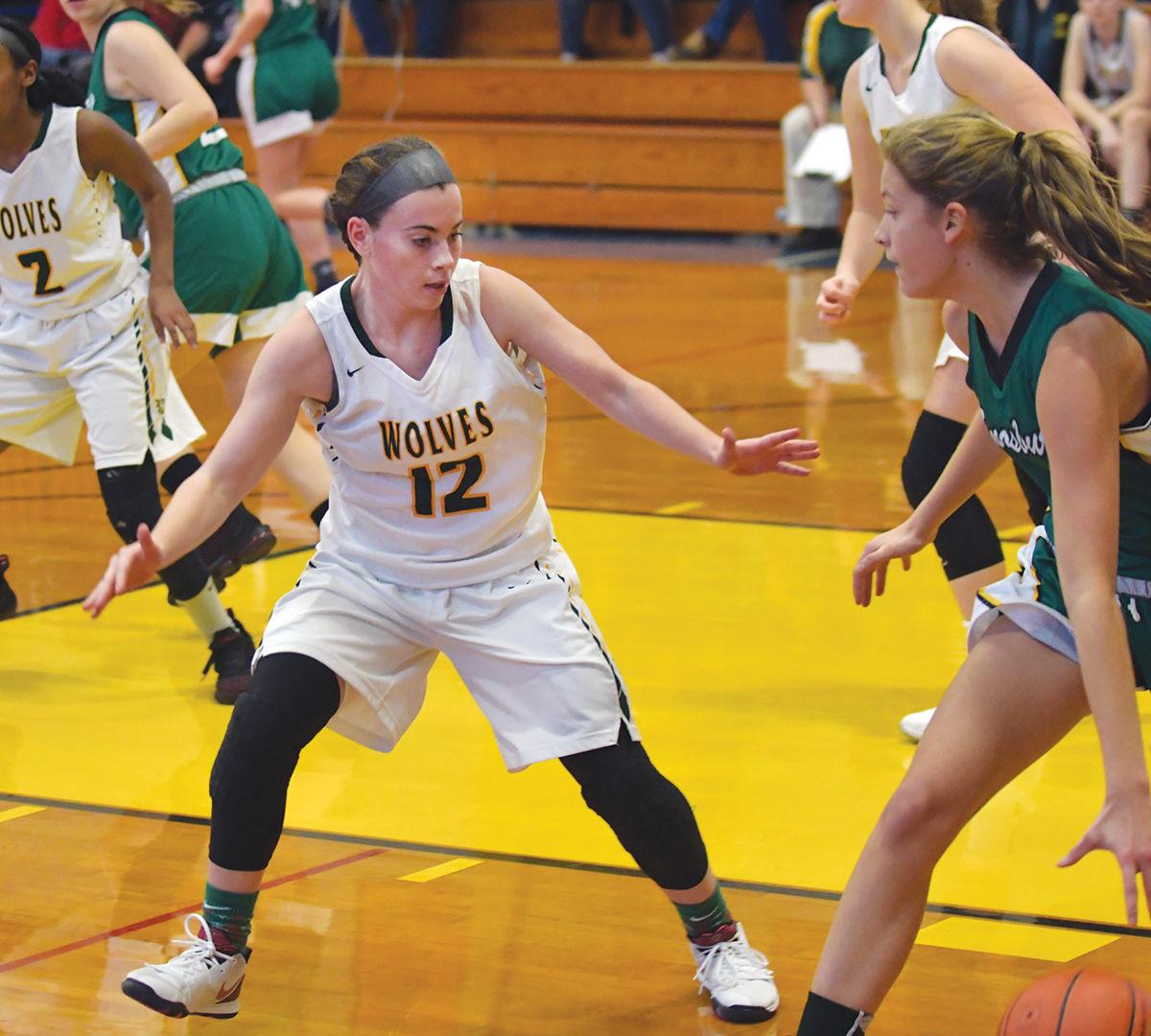 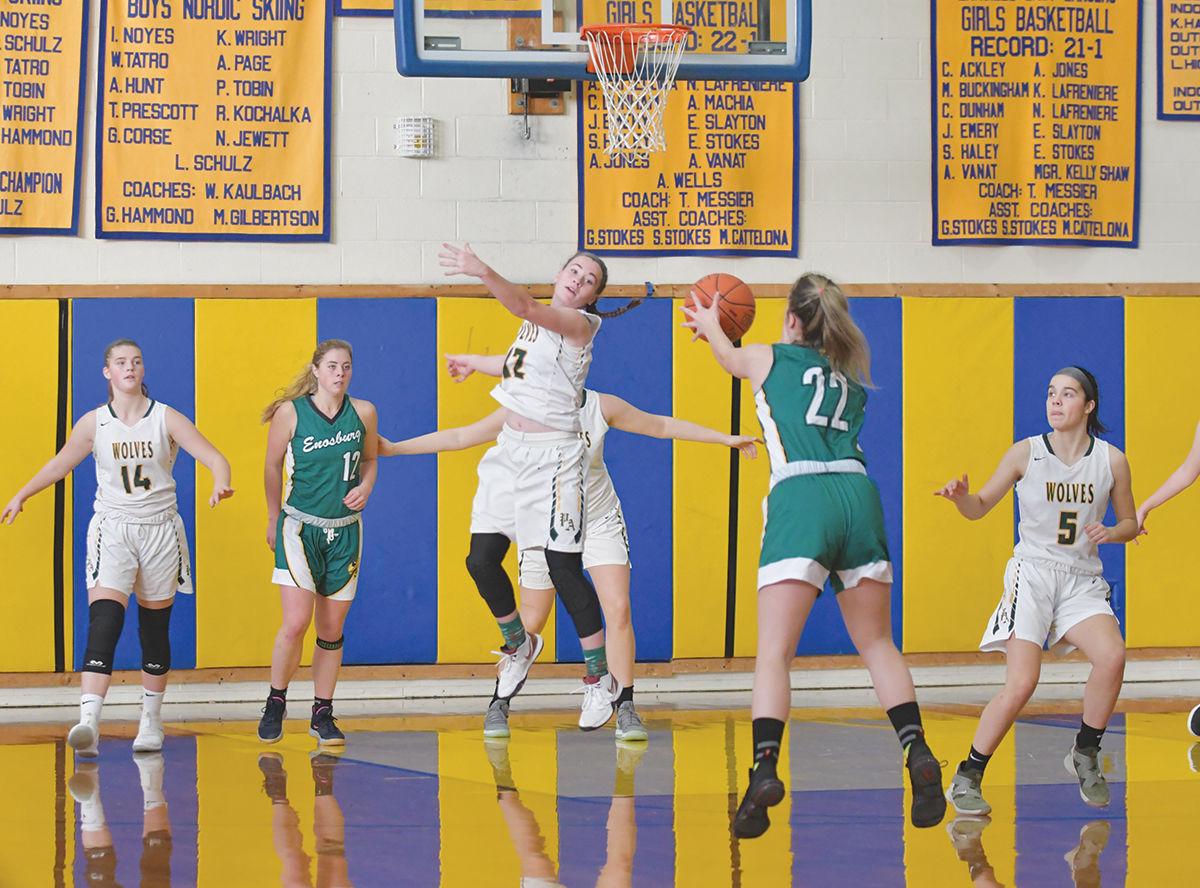 Peoples Academy’s Melania Fogg drives in a game against Enosburg earlier this season.

Lyndon took an early lead but Lamoille, on its home court, came storming back to take a 34-25 lead at halftime and never looked back.

Ten players scored for a balanced Peoples offense as the Wolves got back to .500 on the season with a win over Northfield.

Charlie Veit led the PA offense with 15 points, Joe Buonanno had 10, Tamirat Tomlinson had nine and Dylan LaMare had eight.

An offensive outburst in the first half by Kyle Brown and a stout second-half defense helped Milton beat visiting Lamoille.

Brown scored 18 of his game-high 28 points in the first half. Brandon Dallas Jr. also had 17 points for Milton, which outscored Lamoille 35-16 after halftime to break open a tight game.

Shane Royer led Lamoille with 20 points and Matt Selby had 11.

A 20-point first-half deficit proved to be too much for Peoples to overcome on the road at Missisquoi.

Missisquoi came roaring out of the gates and opened up a 33-9 halftime lead on PA. The Wolves offense finally awoke after the break, and outscored Missisquoi by 10 over the final two quarters, but it was too little, too late.

Missisquoi’s Patrick Walker led all scorers with 18 and Ethan Creller had 15 points.

Down four to start the fourth quarter in a road game, Lamoille outscored Lake Region 15-7 in the final frame to get the win.

Hunter Wells led Lamoille with a game-high 22 points and Shane Royer had 18.

For Richford, Elizabeth Snider and Kamryn Boyce each scored 14 points.

Lamoille jumped on Milton early, building a 22-3 lead by the half, then doubled that advantage after the break to get the road win.

Heidi Tinker had 16 points to lead Lamoille and Nadya Bean chipped in with nine.

Peoples Academy outscored visiting Williamstown 18-4 in the fourth quarter to run away with a tie game.

Peoples finally got rolling after that, outscoring Williamstown by 14 in the final quarter.

Heidi Tinker poured in 23 points to lead Lamoille to a home win over Vergennes.

Down 31-28 after three quarters, the Lamoille offense got rolling in the fourth and outscored Vergennes 16-9 to eke out the win.

Emily Rooney led Vergennes with 12 points and Felicia Poirier had 11.

Lamoille Union’s boys Nordic skiers notched another impressive finish in the season’s early goings, tied for second place with Champlain Valley Union at a meet hosted by U-32.

The Lamoille girls finished fourth at the same event, and the Peoples Academy girls were sixth.

The Lamoille boys finished with 48 points to tie Champlain Valley; host U-32 won the boys team event with 15 points.

The Lancers were led by Jasper Henderson, who was sixth in 16:06.08. Elias Gillen was 14th, Liam McGee 18th and Erubey Lopez just missed out on a top-20 finish, coming in 21st as the final scoring member of the team.

On the girls side, Champlain Valley skied to the team win with 16 points, and CVU skier Esther Cuneo had the fastest time, 17:08.46.

Maggie McGee had the top finish for Lamoille; she was fifth in 18:05.75. Adelle MacDowell was 36th, Kaylee White 45th and Wenzdae Wendling 55th.

Skiing for Peoples, Linden Osborne was eighth in 18:44.48, Anna Isselhardt was 17th, Maya Remick 58th and Brianna Reeves 75th to be the final scoring member of the team, one spot ahead of teammate Weslie Carlson.

The Lamoille girls had 108 points to edge Harwood by just two points for fourth place; Peoples was three points behind Harwood to finish sixth.

St. Albans, a Division 1 team, improved to 4-2; the team hasn’t lost to a Vermont squad yet this season, as both its losses came in an early-season tournament against out-of-state competition.

Playing in Division 2 during the regular season, PA-Stowe dropped to 0-5.

Adrian Bryan scored the only goal of the game to help Peoples Academy-Stowe escape with a win over host St, Albans.

Landon Dubie and Cam Anderson had the assists on Bryan’s score. Goalie Ethan Brown made the lead stand up with 32 saves in the shutout victory.

St. Albans, a perennial power in Division 1, dropped to 4-2. Playing in big-school D-1 again this season, PA-Stowe is now also 4-2.

The News & Citizen caught up with Amanda Tinguad, head coach of the Peoples Academy girls basketball team, for an update on how the season is going.

Here’s a look the reports of successful deer hunters at the Fishing Hole in Morrisville, one of two reporting stations left in Lamoille County; the other is the Cambridge Village Market in Cambridge.