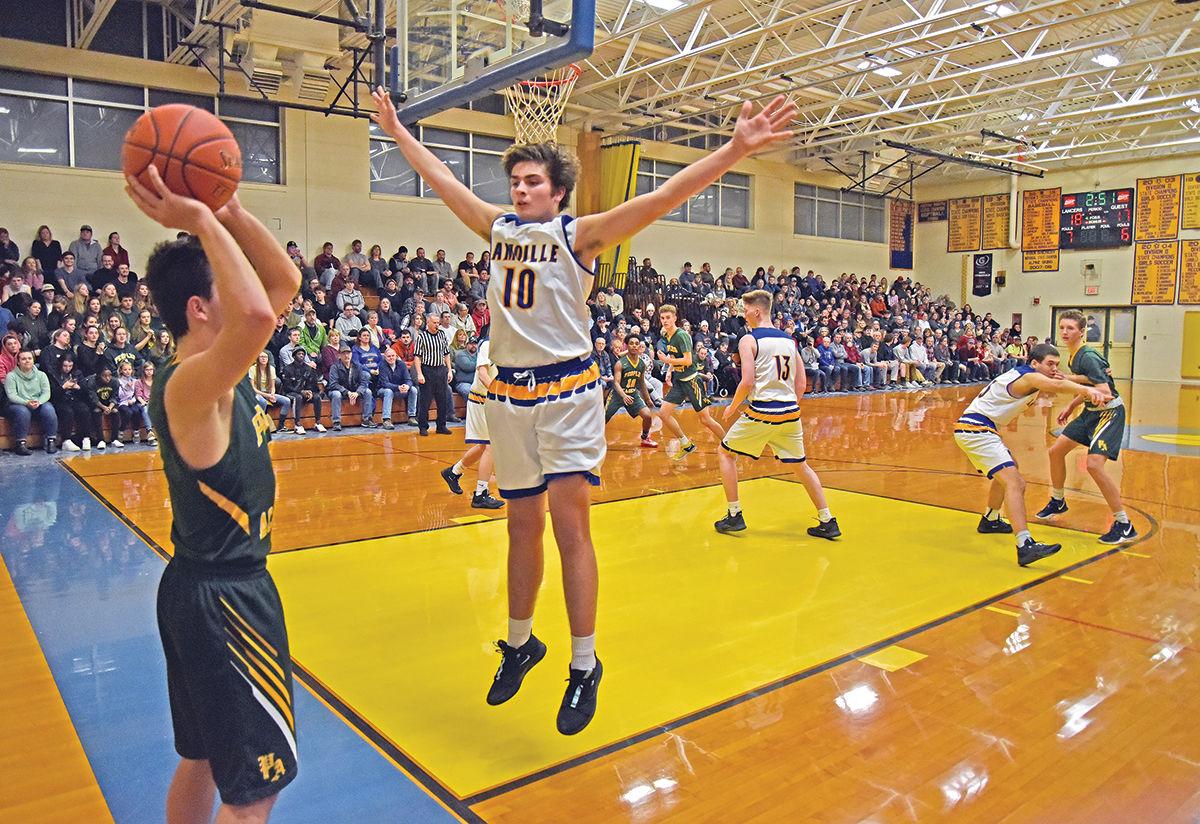 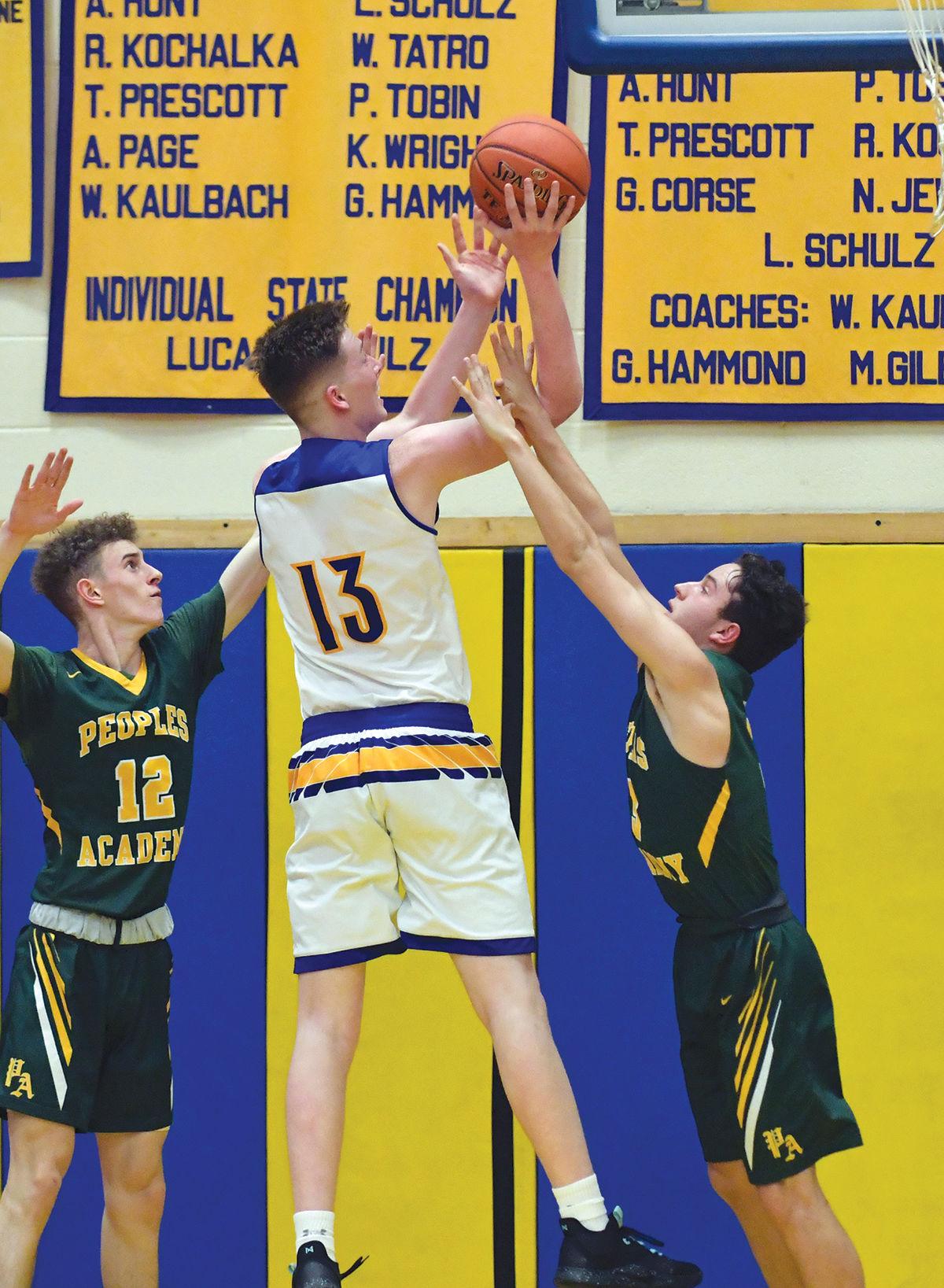 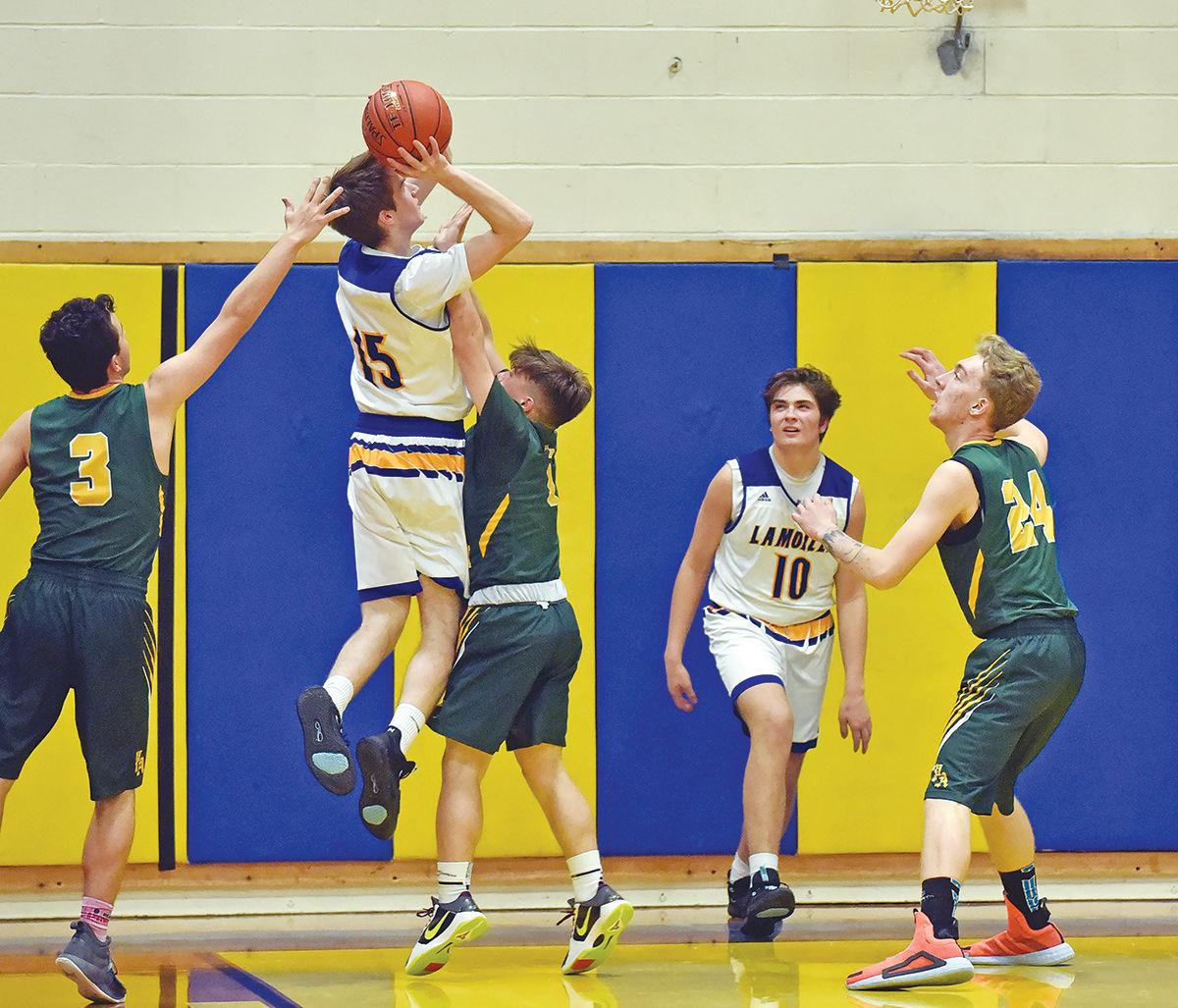 Hannah LaRock hit the game-winning 3-pointer with 14 seconds to go as Lamoille won a slugfest at Missisquoi.

The two squads battled back and forth all four quarters before LaRock hit the key shot.

Missisquoi led 28-22 lead at the half, but Lamoille senior forward Nadya Bean led her team to a strong third quarter, scoring 12 of her game-high 17 points in the third.

The score was tied 48-48 with a minute left when Lamoille got the ball and “put together a great possession” to set up LaRock’s winning shot, coach Brian Barney said.

Lamoille got 19 points from Heidi Tinker, but it wasn’t quite enough as Lyndon won at home.

The Lancers got off to a slow start and were down 25-17 at the half; after a fairly even third quarter, Lamoille was unable to catch up in the fourth.

“We were too complacent all night, did not have good communication on both sides of the floor and they outrebounded us in a 2-to-1 fashion,” Lamoille coach Brian Barney said.

Harwood held visiting Peoples Academy to just seven first-half points and got a season-high 15 points from point guard Ashley Proteau as the Highlanders improved to 4-0.

Harwood used a tough 2-3 zone defense to hold Peoples at bay; the Highlanders were up 19-7 at halftime and 25-14 after three quarters before both teams opened up the offense in the final frame, when Harwood outscored PA 18-11.

For Harwood, Emma Ravelin went 8-for-8 from the foul line and finished with 12 points and Tanum Nelson had eight. As a team, the Highlanders went 12-for-14 at the charity stripe and the trio of Mia Cooper, Ella Gannon and Ashlyn Carst teamed up to grab 22 rebounds.

Burlington-Colchester ran its record to 8-0 with a win at Peoples Academy-Stowe.

Six players scored for Harwood-Northfield. Reese Clayton and Louisa Thomsen had two goals and one assist apiece and Rachel Fernandez scored once and assisted on four other scores. Clara Griffin and Hailey Brickey each had a goal and an assist, Olivia Kaplan also scored and Kailie French, Halle Joslin and Molly Yacovoni has single assists.

Owen Lawton, Tucker Stevens and Hale Hescock scored for Middlebury, Ryan Madeau had an assist and Jeff Stearns turned back 25 shots in goal.

Atticus Eiden scored the goal for PA-Stowe on an assist by Alex Tilgner and Ethan Brown stopped 26 of the 28 shots he faced, as Middlebury’s final goal was an empty-netter — the Raiders pulled Brown for an extra skater in the final minutes, trying to tie the score.

Alex Tilgner and Atticus Eiden provided the firepower for host PA-Stowe. Each scored two goals and assisted on a goal by the other.

Henry Paumgarten piled up three assists, including one to Eiden, who scored an empty-netter after Colchester pulled goalie Hunter Baker for an extra skater, trying to tie the score.

Will Spencer and Jack Corman scored for Colchester and Alex Rublee had two assists.

Lamoille was within five after three quarters, 36-31, but U-32 pulled away in the fourth.

Owen Kellington led U-32 with a double-double — 20 points and 12 rebounds — and Aidan Hawkins scored 14 points.

For Lamoille, Jackson Stanton had 16 points, Shane Royer 15, and Matt Selby had 6 points and 17 rebounds.

Three players scored in double figures for Peoples Academy, which survived a scare from Division-4 Twinfield.

Tamirat Tomlinson led Peoples with 16 points, Joe Buonanno had 14 and Charlie Veit had 10.

For Twinfield, Gavin Fowler had 12 points and Jordyn Holt 10.

Up nine after the first quarter, Peoples blew the game open with a 21-point second quarter in a road win over Richford.

Joe Buonanno led the way for Peoples, scoring 16 of his game-high 18 points in the decisive first half. Charlie Veit also had 18 points, Tamirat Tomlinson had seven and Jake Wilson had six.

Peoples trailed by four at halftime, but held Lamoille to just seven second-half points for a comeback win.

The game, played at Lamoille, was a tale of two halves, as junior forward Hunter Wells and the Lancers used a strong inside game to build a 27-23 lead at halftime. Wells scored 15 of his game-high 17 points in that first half.

“He was dominating the first half,” PA coach Scott Verzilli said. The Wolves adjusted their defense at halftime, sending more help to guard Wells, and it paid off. PA held Lamoille without a bucket for the entire third quarter, going on a 14-0 run that stretched into the fourth and taking a lead Lamoille couldn’t overcome.

“That really opened up the game,” Verzilli said.

Joe Buonanno led PA’s comeback, as the senior point guard scored 10 of his 15 points after halftime, including eight in the decisive third quarter. Tamirat Tomlinson had 14 for Peoples and Charlie Veit had nine.

Selby had 8 points for Lamoille.

Gilmore was fifth in the 2-mile race with a time of 11:24.65, just two seconds out of fourth place and only seven seconds off the podium.