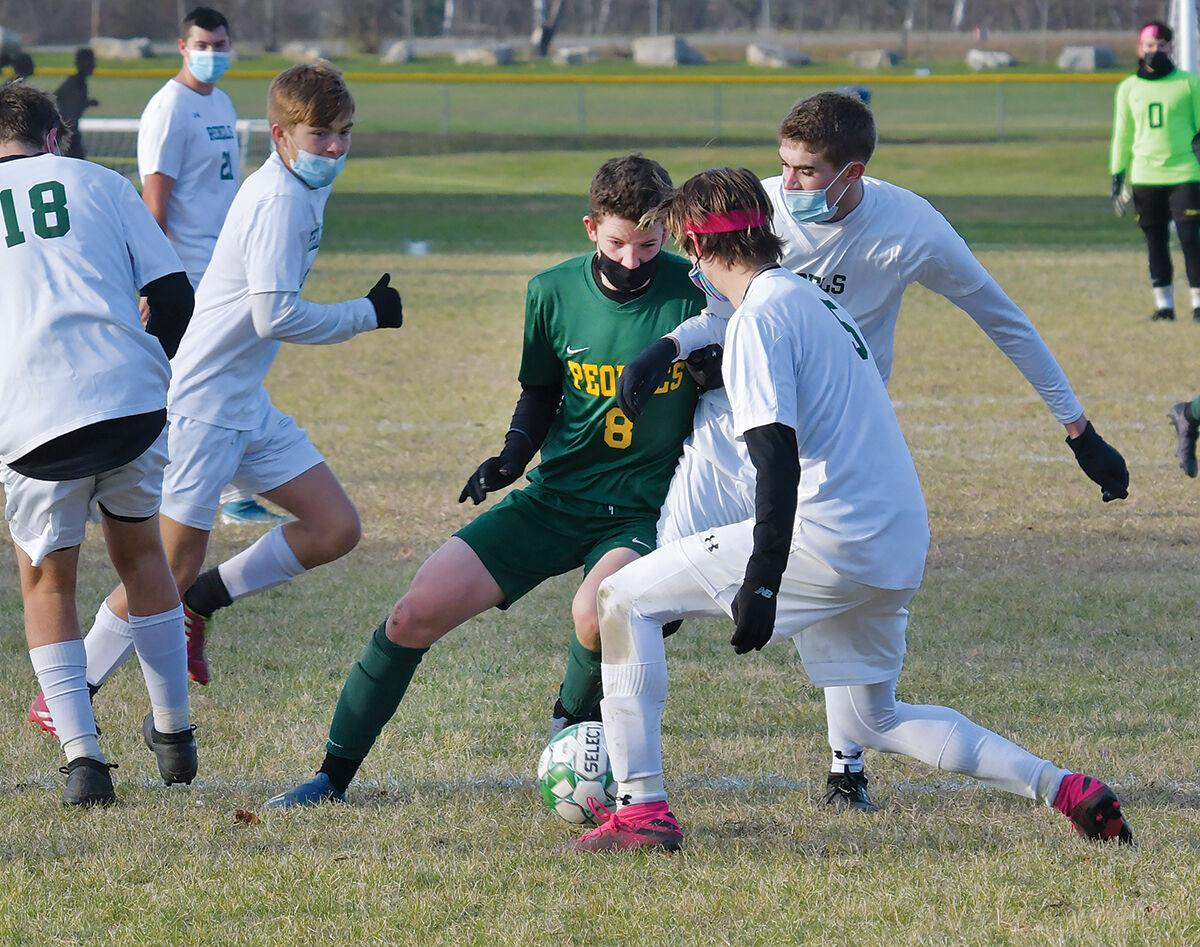 PA’s Gabe Carlson squares off against a pair of Leland & Gray players during the Wolves’ 5-0 shellacking of the visiting squad in the Division-3 quarterfinals last week. 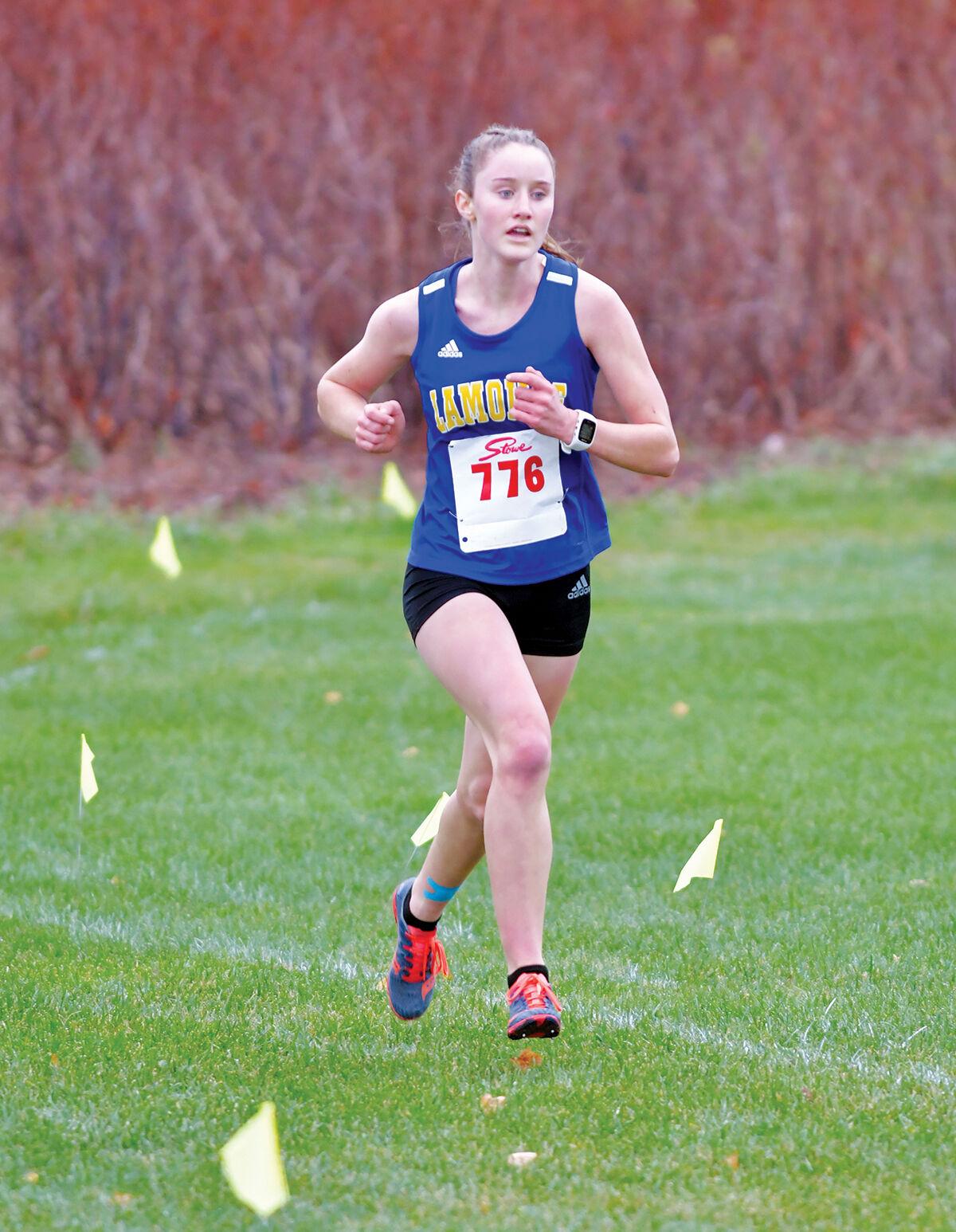 Lamoille’s Maggie McGee, who finished second in the Division-2 state championship race, runs at a race in Stowe earlier this year. 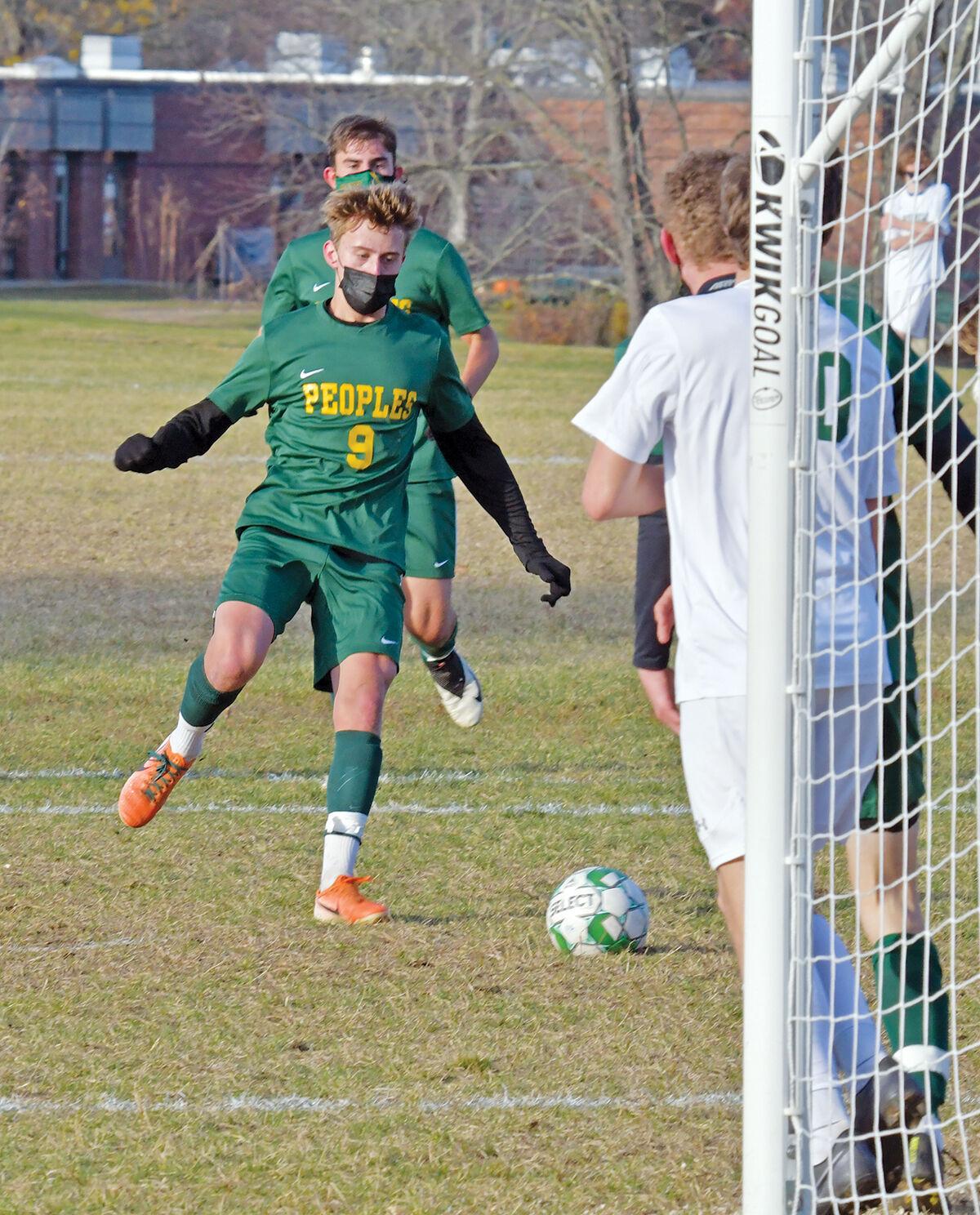 Norris Duff, who scored twice in PA’s quarterfinal win over Leland & Gray, takes a touch during the game last Friday.

PA’s Gabe Carlson squares off against a pair of Leland & Gray players during the Wolves’ 5-0 shellacking of the visiting squad in the Division-3 quarterfinals last week.

Lamoille’s Maggie McGee, who finished second in the Division-2 state championship race, runs at a race in Stowe earlier this year.

Norris Duff, who scored twice in PA’s quarterfinal win over Leland & Gray, takes a touch during the game last Friday.

The Lamoille boys finished seventh as a team with 189 points. U-32 had the top seven boys’ runners to win the state title with a perfect score of 15, Spaulding was second with 102 and Harwood third with 105.

Here’s a rundown of where the Lamoille runners finished in the 5,000-meter title races for Division 2. Runners are listed by finish, name and time.

No. 4 Peoples Academy at No. 1 Vergennes

Fourth-ranked Peoples poured in five goals to bounce No. 5 Leland & Gray from the postseason in the Division 3 quarterfinals.

The Wolves jumped on the visiting squad early, as Ollie Nigro collected a turnover and found Charlie Veit, who beat the Leland & Gray keeper to make it 1-0 just 2:30 into the first half. Peoples put the game away 20 minutes later, scoring three goals in a 3-minute span while a fourth score was called back.

Nathan Nolan scored on a rebound to break open the floodgates, Norris Duff scored a minute later after a deflection by the Leland & Gray defense and Nigro capped the scoring flurry with a deep shot off an assist by Reese Wheeler. A goal just before that, scored by Wheeler on a Nigro assist, was called back by the officials.

Peoples rounded out its scoring after halftime, when Duff scored his second goal after a cross by Nolan.

Wolves’ goalie Dylan Haskins made three saves, including a diving one on a sure free-kick goal by Leland & Gray in the second half that preserved the shutout for Peoples.

The win sent Peoples on to the Division-3 semifinals, where the Wolves were slated to play at No. 1 Vergennes on Wednesday.

Second-ranked and undefeated Harwood scored five goals in each half to end No. 10 Lamoille’s season in the Division 2 quarterfinals.

Harwood built a 5-0 lead by halftime; Lamoille attempted to rally after the break with two scores, but the Highlanders’ high-powered offense kept rolling to put the game beyond reach.

“Girls played their hearts out,” Lamoille coach Amy Sparks said about the Lancers’ attempted comeback. “So proud of them.”

Harwood star Tanum Nelson led the Highlanders with a hat trick and two assists, Emma Ravelin had two goals and an assist and Louisa Thomsen added two goals of her own.

Phoebe Loomis scored for Lamoille, earning and then converting a penalty kick, and Barrett Freeman added an unassisted goal. Lancer keeper Emily Hutchins piled up 19 saves in the loss.

Sisters Phoebe and Essie Loomis teamed up to score the game-winning goal late in regulation as No. 10 Lamoille upset No. 7 Springfield in the opening round of the Division-2 playoffs.

The game between the two teams was a rematch of their 2019 opening-round contest, which Springfield handily won.

The two squads battled through a scoreless first half, and the score was still tied at 0-0 with overtime looming when Essie Loomis, a freshman, served a cross in to the box to her older sister Phoebe, who scored a header to put Lamoille up with less than three minutes left in regulation.

Lamoille’s sophomore goalie Emily Hutchins continued a strong season with 11 saves, teaming up with Hannah LaRock and Maddy Benoit to anchor the defense as it pitched a shutout.

Colchester’s Carson Corrigan threw two touchdowns to lead No. 2 Colchester to the win over No. 10 Fairfax-Lamoille in the quarterfinals of the Burlington-area postseason football tournament.

Tenth-ranked Fairfax-Lamoille built a 28-7 lead by halftime then withstood a furious comeback by No. 7 Rice after the break to get the win in the opening round of the Burlington-area playoff tournament.

Rice came storming back after the half and scored a touchdown with three minutes to play to get the margin back to two at 28-26. Fairfax-Lamoille stuffed Rice’s two-point attempt after that score to stop the comeback and seal up the playoff win.