Skip to main content
You are the owner of this article.
Edit Article Add New Article
You have permission to edit this article.
Edit
Home
News
Sports
Opinion
Community
SCENE
Calendar
Special Publications
Marketplace
Classifieds
Contact Us
1 of 9 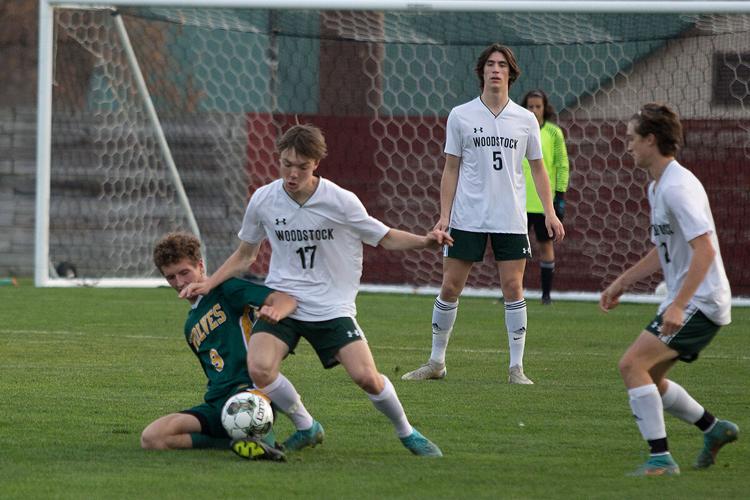 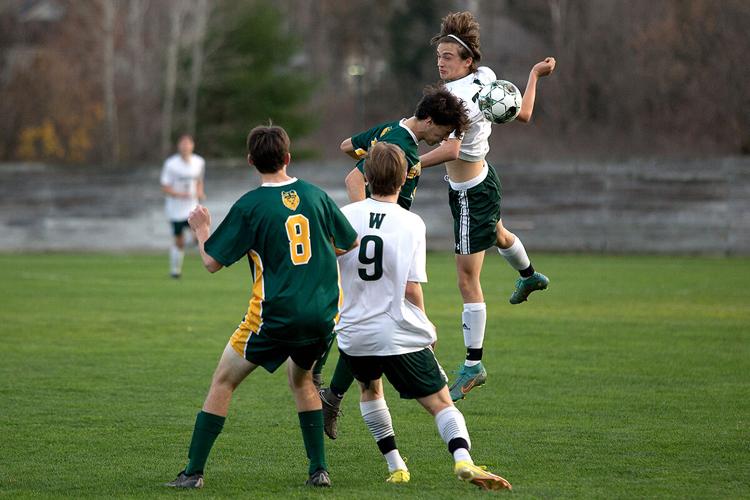 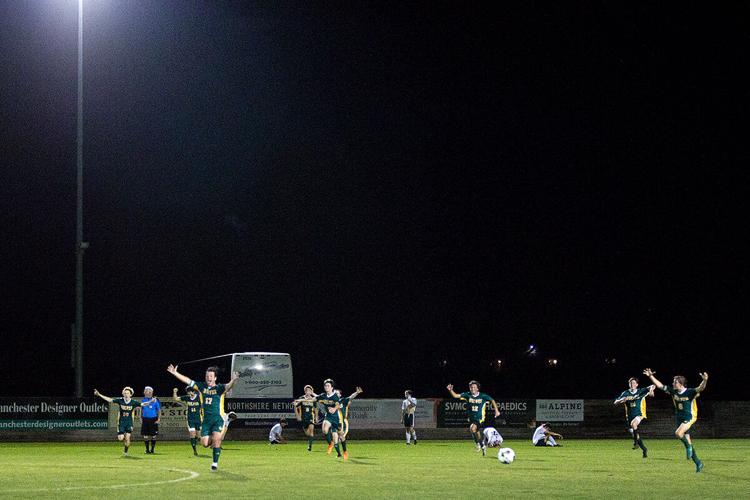 The Peoples Academy Wolves celebrate winning the Division III boys’ soccer title Saturday. To earn its way to the final, PA had to first defeat Stowe, ending a 20-year playoff drought against the Raiders. 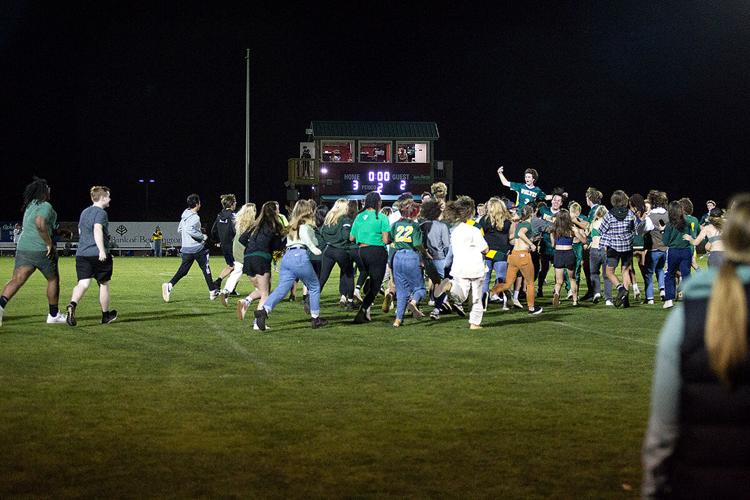 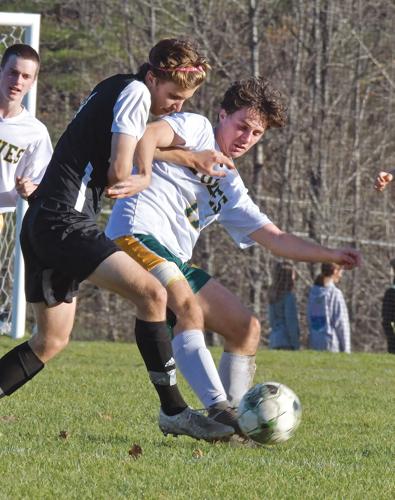 Players from sister schools Stowe High and Peoples Academy tussled to a 1-1 overtime sudden death in a semifinal matchup last week that featured more than 30 fouls between the two teams. 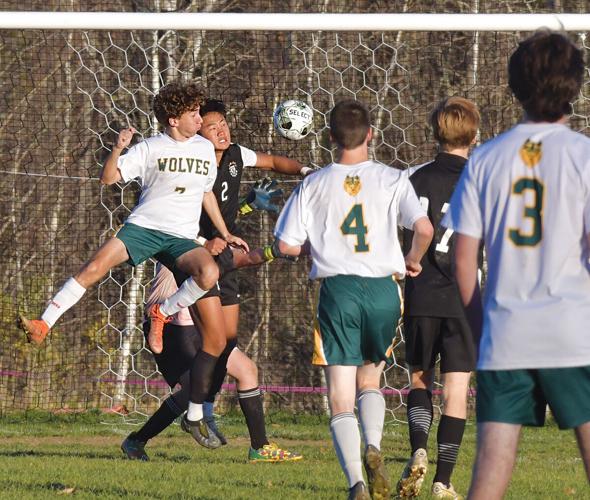 Last Wednesday in the Division III semifinals, Max Kuhnle got a head on it — and so did Stowe defender Aaron Lepikko — and the ball slid through goalkeeper Brock Roick’s hands. 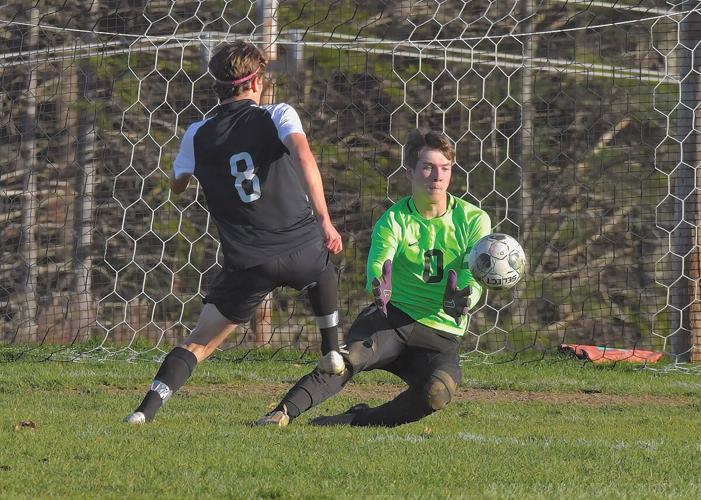 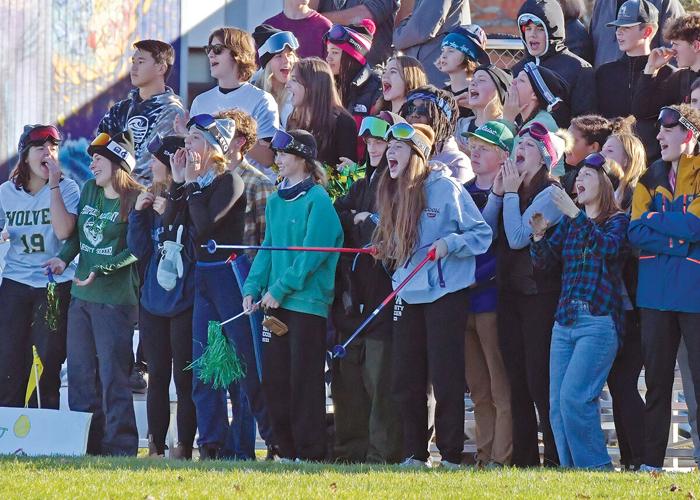 The Division III boys’ soccer semifinal game had the feel of a championship match, as hundreds crowded the sidelines at Stowe High School to watch Peoples Academy upset the higher-seeded home team, earning a berth in the finals. 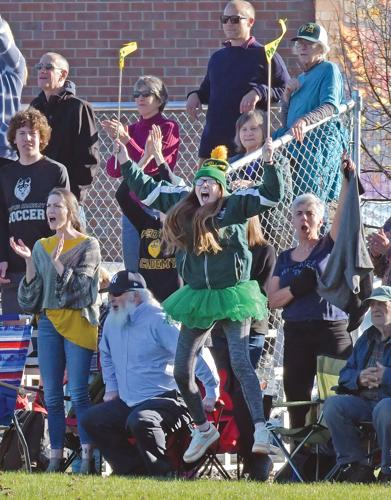 The Peoples Academy Wolves celebrate winning the Division III boys’ soccer title Saturday. To earn its way to the final, PA had to first defeat Stowe, ending a 20-year playoff drought against the Raiders.

Peoples Academy was a just a little bit extra on Saturday as the school won the Division III boys’ soccer championship.

In an evening game played under the lights at Applejack Stadium in Manchester Center, the third-seeded Wolves defeated No. 5 Woodstock to take home its second DIII crown in three years.

The final score was 3-2 and marked the swan song for coach Angie Faraci, who announced the next day that it was her last game.

“We had our moments of weakness and allowed two goals on defensive mistakes, but at the same time, we countered, we pressed, and we never relented,” Faraci said after the game. “This is what makes this team special.”

The Wolves’ scoring was bookended by Max Kuhnle, who put the first and last scores on the board. Kuhnle started the game much the same way he helped end the semifinal game against arch-rival Stowe, with a header past the goalkeeper.

Kuhnle scored in the 28th minute after free kick specialist Ivan Buczek sent one in that Kuhnle put on his noggin with enough English to force keeper Ethan Zayes to fumble the ball into net.

If there’s a way to score a casual goal in soccer, this was it. Nolan’s PK had all the ferocity of someone grabbing the chips from the top shelf. Oh, you want this ball in that spot? Here you go.

The scoring spurt came after a first frame half largely marked by Peoples slightly controlling the tempo in the Woodstock half of the field, playing a patient game of pass and pass some more. When Woodstock was able to disrupt that play, the ball was invariably fed to senior speedsters Declan McCollough and Alec Smail up the middle and right flanks, right wingman Smail wearing a cast on his right hand and fired up to score right now.

For the rest of the first half, the Wolves played timekeeper. At one point Chandler Follensbee managed to allow 20 seconds to tick off as he set up a goal kick.

In the second half, Woodstock wasn’t having any of that slow-down play.

The Wasps’ run and gun style led to plenty of chances to set up plays on corner kicks, and Woodstock had umpteen of them on the night. None of them connected.

What did connect, however, was Declan McCollough. The senior single-footedly brought his team back with bang-bang goals starting six minutes into the second half.

McCollough took advantage of a pair of PA backs who got too close to each other, and when the second-to-last line of defense couldn’t get the ball off the attacker’s feet, there wasn’t much an exposed Follensbee several feet from the goal could do but spread his arms and wince as a quick Declan deke narrowed the score to 2-1.

Three minutes later, McCollough didn’t even bother playing with the defense. He simply left them near midfield and got Follensbee well off his line early, leaving a wide-open net beckoning.

PA, no longer able to run time off the clock, needed some speed. And McClain delivered, accelerating up the endline and slotting the ball to Kuhnle who put a back heel on it, making it 3-2.

Perhaps the play of the game came a few minutes later when McCollough tricked Follensbee into coming way out of the box, forcing PA defender Derek Baxter to cover the open net and put some Newtonian equal-and-opposite foot physics on McCollough’s surefire shot, sending the would-be goal flying the opposite way.

Sometimes you get by with a little help from your foes, and that’s what happened next, as Smail and his unraveling full-arm cast got tangled up with Buczek.

A little extra attitude toward the ref earned Smail a red card.

PA played the game with a little extra, as Woodstock — a fifth-ranked team with a streaky season that nonetheless knocked off top-ranked Vergennes to earn a finals berth — now had to work with 10 players for the final quarter hour.

With the extra player, PA was finally able to fully control things until the final horn.

“Coach Angie just finished her last season with PA as head coach,” she said in an email. “Sethe2 championships. Her time at PA has ended in the best way possible.”

The Peoples Academy boys’ soccer team last week achieved a feat that no current player has ever achieved — beat the Stowe Raiders in the playoffs.

It happened last Wednesday in the Division III semifinals, as the third-ranked Wolves knocked off No. 2 Stowe.

The last time the Wolves beat their arch-rival and sister school was 20 years ago, when top-ranked PA blanked the Raiders in the 2002 state championship game.

Last week’s semifinal game had the feel of a title tilt, with cars lined up along Barrows Road for a quarter mile in both directions, and cheering fans filling the sidelines.

After a scoreless first half, PA scored first 11 minutes into the second from a header by Kuhnle.

Stowe countered six minutes later, and the two teams battled it out in a game that featured 33 fouls, fairly evenly distributed.

The overtime victory largely came down to a coin flip, as PA chose to make Stowe defend while looking into the blinding setting sun.

Forty-eight seconds into the extra period, Baxter placed a free kick right in front of the goal and at least three players leapt for the ball. Kuhnle got a head on it — and so did Stowe defender Aaron Lepikko — and the ball slid through goalkeeper Brock Roick’s hands.

Follensbee had an astounding 19 saves in the semifinal game.