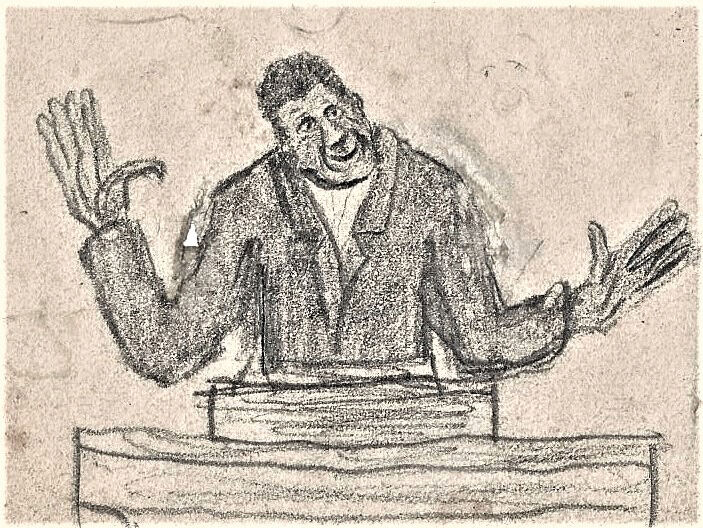 A sketch of the Rev. George S. Brown, drawn by young Henry Mack from Hardwick, taped inside the reverend’s journal. If you are wondering why Brown’s hands are so large, remember that he was a stonewall builder by profession. Brown is credited with getting the Wolcott church built in the mid 1850s. 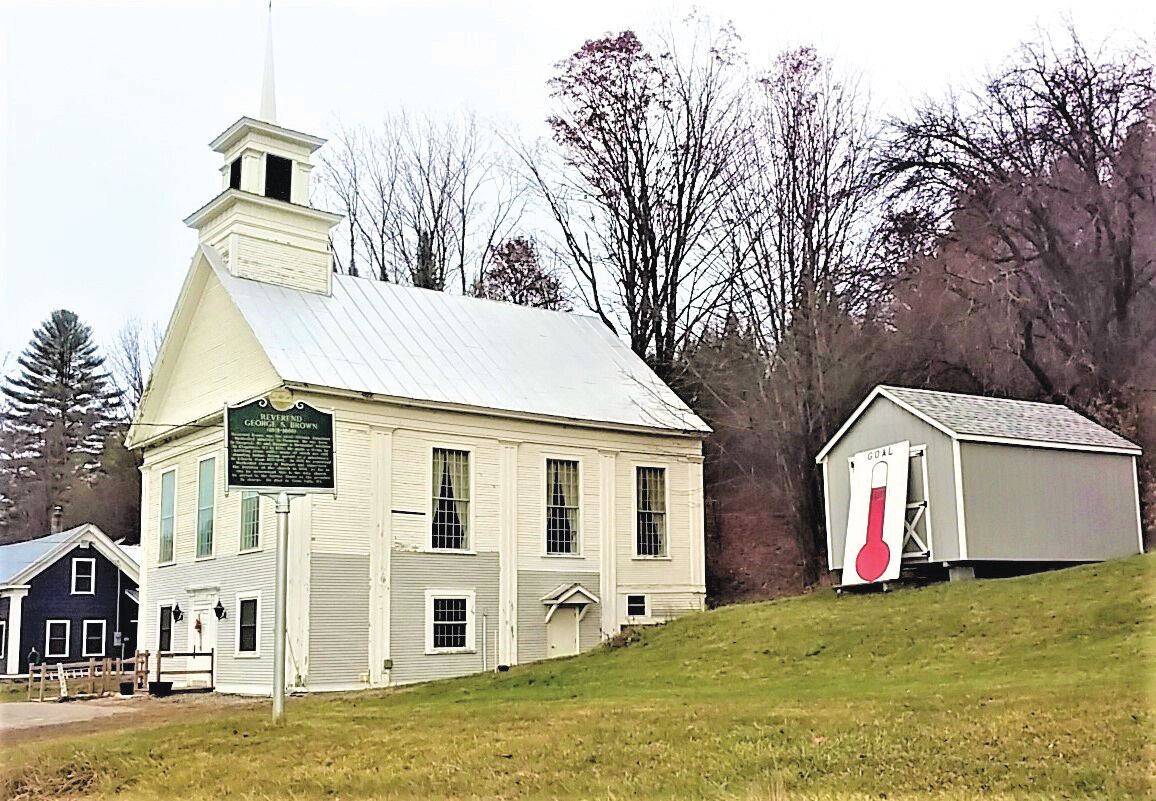 A sketch of the Rev. George S. Brown, drawn by young Henry Mack from Hardwick, taped inside the reverend’s journal. If you are wondering why Brown’s hands are so large, remember that he was a stonewall builder by profession. Brown is credited with getting the Wolcott church built in the mid 1850s.

Recently, I have come to realize how easy it would have been for the story of George S. Brown’s ministry at the Wolcott United Methodist Church to have been lost and forgotten — especially the fact that he was an African American.

Although original church records are in Brown’s handwriting, and Brown’s name appears as preacher-in-charge, there is nothing that indicates that he was an African American. Had it not been for the fact that Florence Reed included the information in her 100th anniversary history of the church, it is questionable whether this would ever have been uncovered.

“The preacher in charge was the Rev. George S. Brown, whom Hemingway’s (Hemenway’s) Gazetteer says was a Negro.”

This information actually came from Hamilton Child’s “Gazetteer and Business Directory of Lamoille and Orleans County, Vt, for 1883-84 (p. 162)”: “Rev. George Brown, a colored man (was) the first resident pastor. Through his energy and perseverance money was raised to build the present church building which was erected in 1855 (1856).”

The fact that this information was even included in Child’s “Gazetteer” is a strong indication of how well-known Brown must have been to have been remembered some 25 years later when the “Gazetteer” was published.

Nevertheless, despite these references, Brown’s story remained unknown until the Rev. Kirk Thompson, pastor at the Wolcott church from 2001-2005, shared that information with me. I was immediately intrigued and decided to try to uncover Brown’s story.

It was no easy task.

Although I soon discovered that a fair amount of information had been written on Brown’s life and ministry in the Glens Falls, N.Y., area — where he worked as a stonewall builder, was converted, entered the ministry and spent the end of his life as Troy Conference’s first African American pastor — as well as his missionary work in Liberia, there was nothing available about his life here in Vermont.

Brown published his journal, which documents his missionary work in Liberia, in 1849, three years prior to his moving to Vermont. Though he was a highly successful missionary, having been ordained a deacon and an elder, he became entangled in a political battle between his superintendent, John Seys, and the Liberian governor, Thomas Buchannan. Refusing to take sides, he was eventually expelled from the church in Liberia and sailed back to America, hoping to have his credentials restored.

This took 10 years, however, due to opposition from a few white members of the Troy Conference, combined with critical letters written by Seys. Brown eventually concluded there was no recourse except to sue Seys for slander — an amazing action in pre-Civil War days. Though the suit was settled in his favor, Brown was expelled from the Fort Ann Circuit for having sued a white minister.

It was not until a biography of Rev. Henry Boardman Taylor was discovered in a box of uncatalogued records at the Troy Conference archives, that we learned what brought Brown to Vermont.

Taylor received Brown as a member of his church; he was licensed to preach again and assisted Taylor in revival work. Taylor, however, was tried at the 1852 Troy Conference for “mal-administration of the Discipline” for receiving an individual who had been expelled by another circuit.

Though Taylor was acquitted, he was appointed to the Berkshire, Vt., circuit — Berkshire, Richford, Montgomery and Enosburg. Brown apparently came to Vermont with Taylor, as I then discovered a resolution from the Berkshire Quarterly Conference recommending the restoration of Brown’s preaching credentials, which was approved at the 1853 Troy Conference.

Then, in 2017, a newspaper, The Vermont Christian Messenger, became available online, with references to Brown’s ministry in Wolcott. The April 18, 1855, edition reported that revivals had taken place in Elmore and Wolcott with 80 souls professing justification, and 40 becoming members. The work was still progressing in Wolcott under the “instrumentality of Rev. George S. Brown, a local (colored) preacher, whose labors ... have been very abundant and successful for some months.”

Although they were scarcely able to afford any preaching at the beginning of the year, the Wolcott folks were proposing to support their own preacher for the coming year.

Only scattered issues are available for the three years that Brown served in the area, and there are no references to the construction of the church building. We do, however, have the original minutes of the 1856 meeting where it was voted to build the church, which state that the pastor appointed six (white) men as the trustees for the building — highly unusual in 1856 and a strong indication of the respect which the members of the Wolcott church had for their pastor.

That same year I purchased an original copy of George S. Brown’s journal, which had been owned by Rev. Daniel Lewis, who followed Brown as the pastor in 1859-1860. Taped into the front of the journal was a sketch of Brown, drawn by young Henry Mack from Hardwick, who, census records revealed, would have been 12 to 13 years old at the time. And, if you are wondering why Brown’s hands are so large, remember that he was a stonewall builder by profession.

In September 2019, Bill Lizotte donated a copy of a letter written by Brown to his great-great grandfather, Truman Hall, who was living in the Minnesota Territory. This letter revealed that during the summer and fall of 1857, not only had Brown been pastoring the Wolcott Methodist Church, but he had been busy with the congregation in Morrisville, as well, since Aaron Ball, the appointed pastor, was available only on Sundays.

So Brown had to assume other duties — one in particular, at that time, making tents for the camp meeting held in Stowe that summer — two for the folks in Morrisville and one for the Wolcott congregation.

Reflecting about all of this during the pandemic, I have become very aware how easy it would have been for Brown’s story to remain hidden.

Now that it has been revealed, however, it has become one of the primary missions of the church to assure that Brown’s story continues to be told, and to assure that the church built under his supervision is maintained as a part of that story.

To that end, the church has undertaken a $200,000-plus historic restoration project, which it hopes to complete within the next two years. The church will then open the Fellowship Hall to the community — for birthday parties, showers and other meetings and events.

For more information or to donate, contact Rev. Pat Thompson at pajt8817@aol.com.