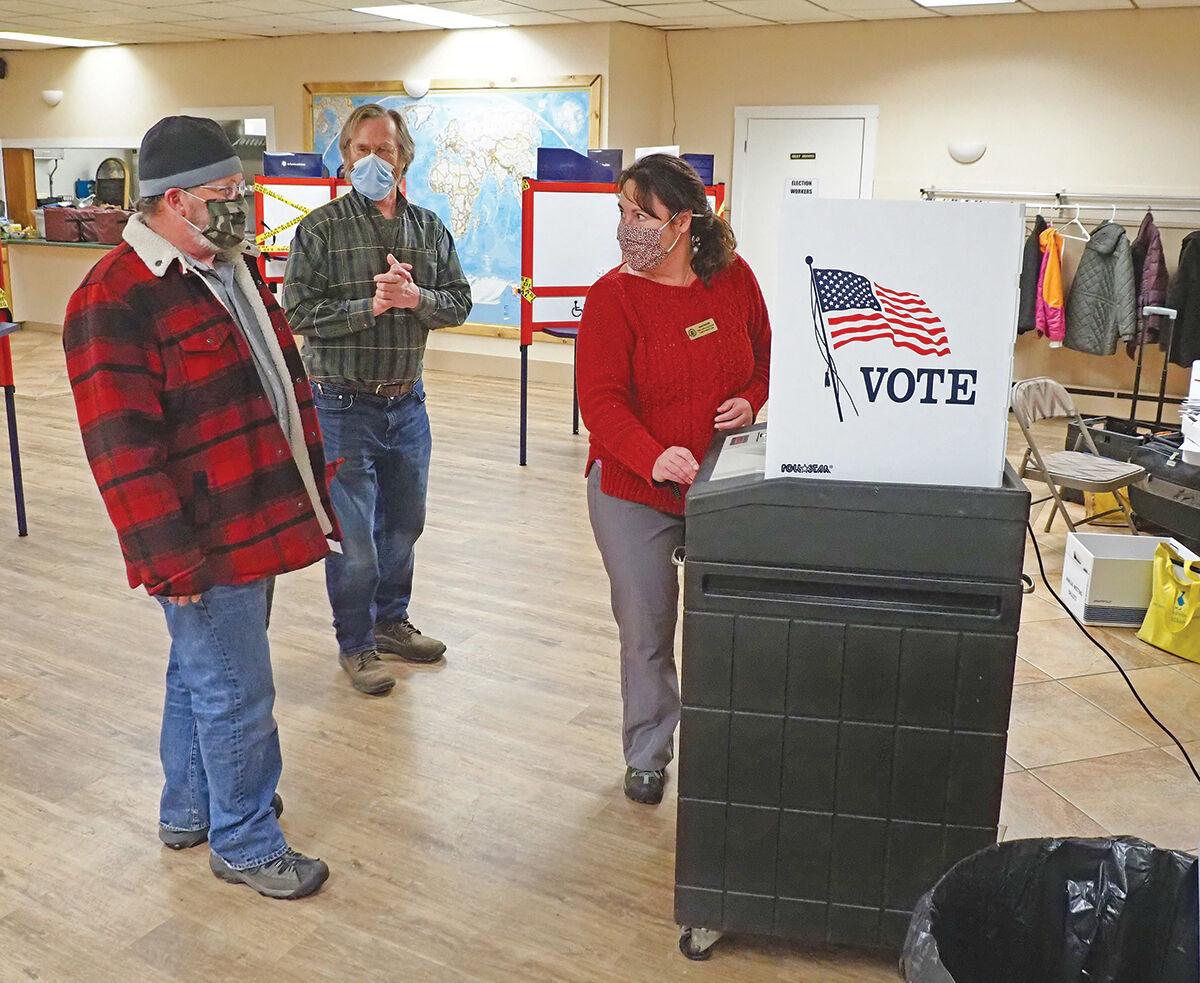 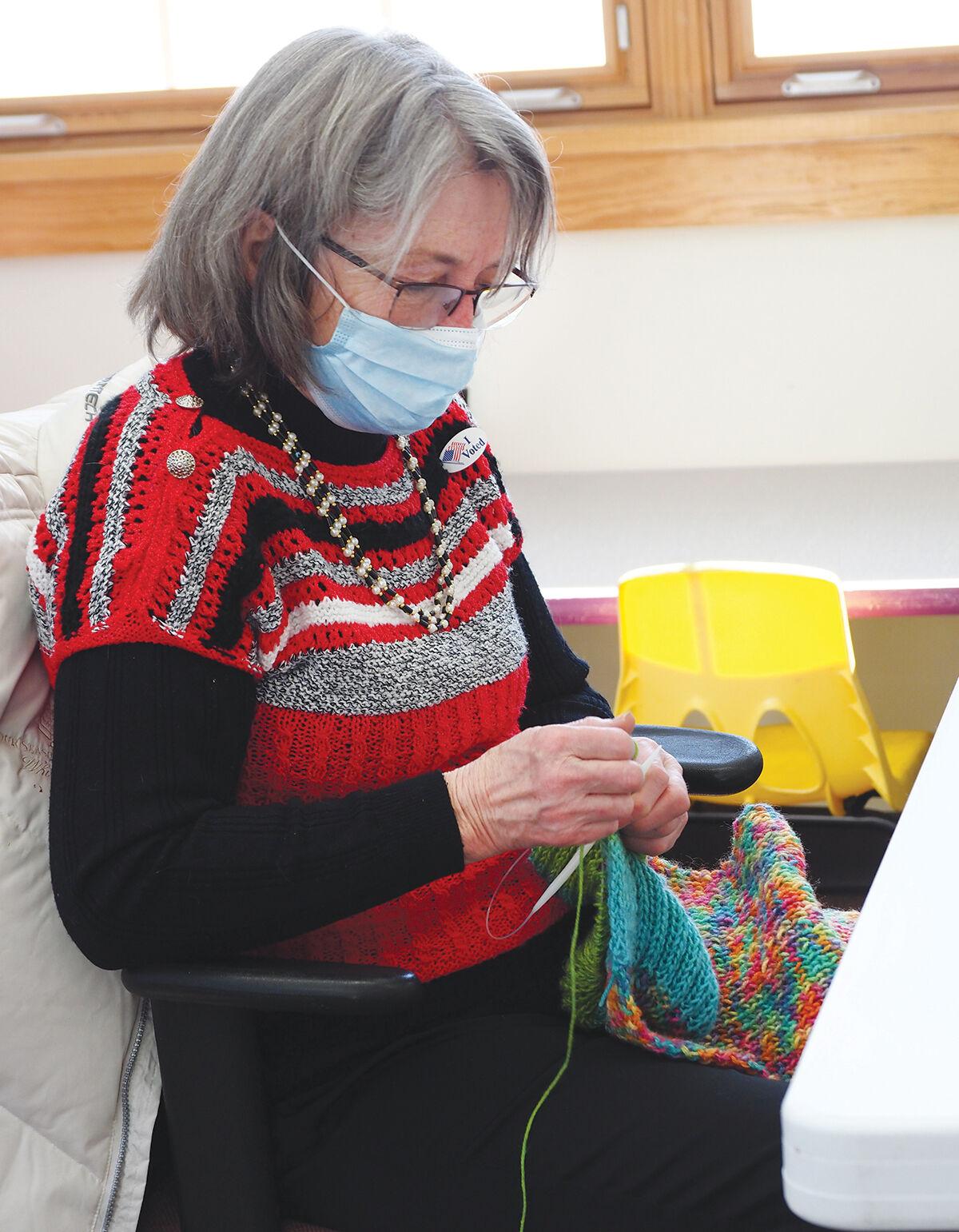 Linda Reeve gets some knitting time in at Wolcott’s polling place on Tuesday, Town Meeting Day in Vermont. 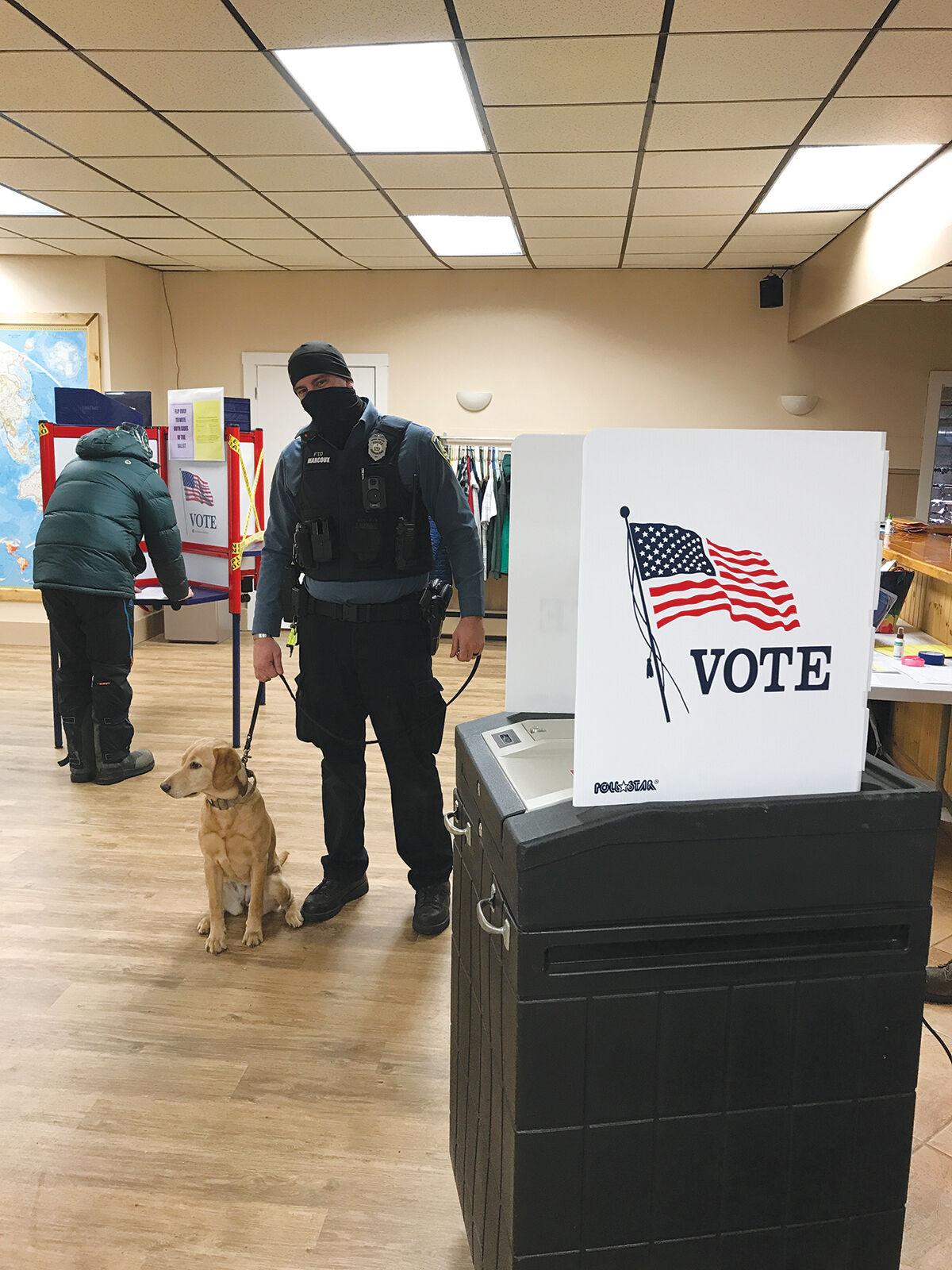 Morristown’s newest officer-in-training, Cedar the yellow Labrador retriever, keeps an eye out for voter frau-- — we mean, cuddles and awwws — at Morristown’s polling place at the VFW. With Cedar is her handler, officer Jacques Marcoux. 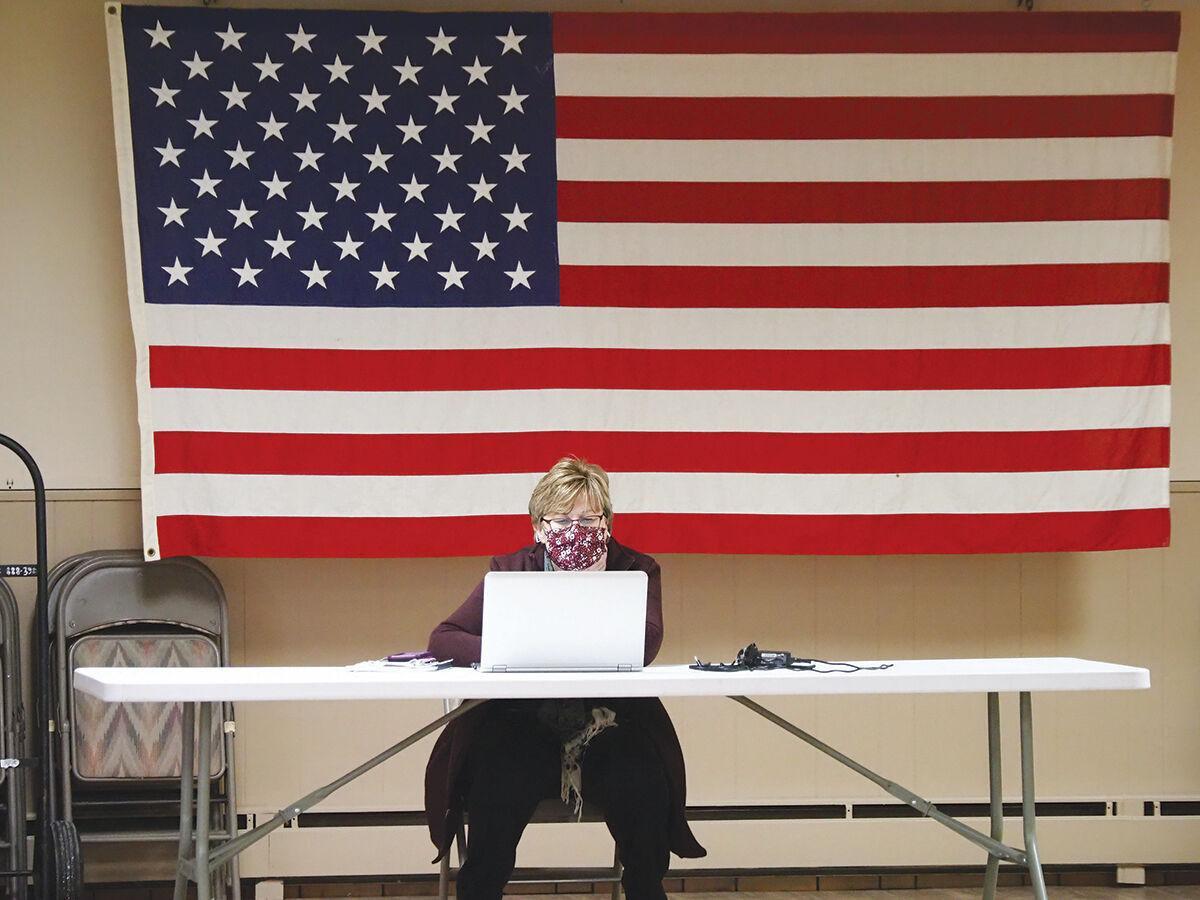 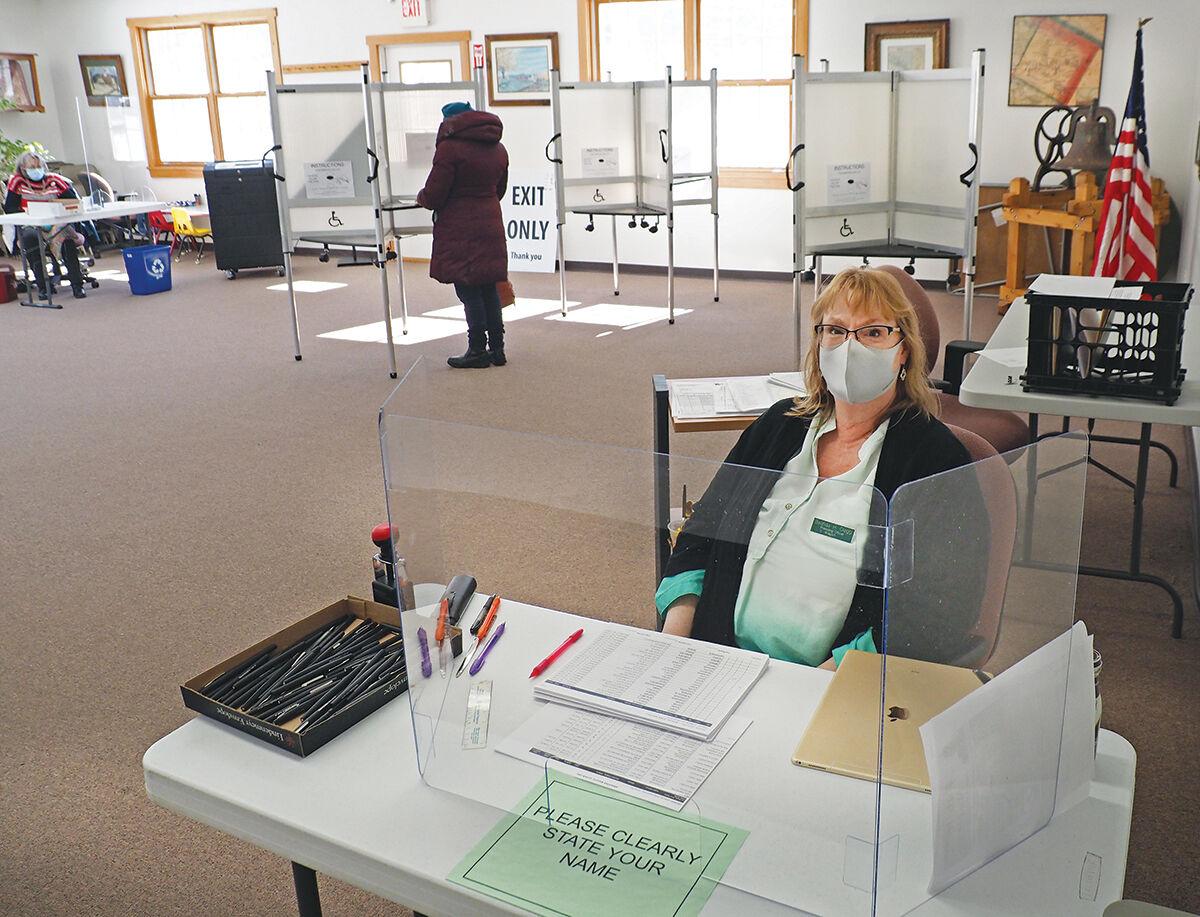 Belinda Clegg, district clerk and treasurer in Wolcott, is ready to check in voters at Tuesday’s Town Meeting Day.

Linda Reeve gets some knitting time in at Wolcott’s polling place on Tuesday, Town Meeting Day in Vermont.

Morristown’s newest officer-in-training, Cedar the yellow Labrador retriever, keeps an eye out for voter frau-- — we mean, cuddles and awwws — at Morristown’s polling place at the VFW. With Cedar is her handler, officer Jacques Marcoux.

Belinda Clegg, district clerk and treasurer in Wolcott, is ready to check in voters at Tuesday’s Town Meeting Day.

It was a cold, unconventional Town Meeting Day, but voters, either at the polls or from the shelter of their homes, had their say. Turnouts were smaller than in the past for many and eleventh-hour surprises were at a minimal.

Here’s a rundown of what was decided. Belvidere, Eden and Waterville all opted to postpone their votes, choosing instead to reconvene this summer.

Following a near-record voter turnout in November, Town Meeting Day in Cambridge was a decidedly smaller affair, with just 425 of the town’s registered voters casting ballots.

Still, that was enough to accomplish the task at hand, approving every spending measure and electing those who will help run the town.

Here’s how the results panned out:

• Voters handily supported the combined general and highway fund spending of $3.5 million, of which a little less than $2.2 million will be paid for by property taxes. The measure passed 339-53.

• Voters also agreed to appropriate $1,000 to support the North Central Vermont Recovery Center and to pay each selectboard member a $2,500 stipend for the next year.

• Taxes this year will be collected in one installment, due Nov. 15, but won’t include the Fraternal Order of Eagles’ Green Mountain Aerie property, which remains tax exempt for five more years, so sayeth voters.

• In elections, there were a few contested races. In the contest for a two-year term on the selectboard, incumbent Larry Wyckoff bested challenger Teelah Hall, 252-154. For a single-year term as a town auditor, Jill Bryce beat Cindy Vaughan 205-151. And for library trustee, five-year term, Carol Plante eked out an 11-point victory over Justin Marsh, 207-196.

• On the education front, Cambridge maintains its own elementary school district, and voters approved full funding for the school. The $6.1 million school budget passed 313-98. Measures to set aside the district’s $112,471 fund balance for capital improvements, and to pay school board members $1,200 a year ($1,500 for the board chair), also passed.

• All school district election races were uncontested. Laura Miller won a 3-year term on the elementary school board, Denise Webster won a 2-year term there, and Susan Hamlyn Prescott and Jan Sander were each elected to three-year terms on the Lamoille North Unified Union district board.

At the Craftsbury Town Hall Tuesday, 363 people participated in Vermont’s annual exercise in democracy, either directly or by absentee ballot.

Mike Martin failed in his bid to unseat Susan Houston from her 3-year seat on the Craftsbury Selectboard, 199-159. All other town offices were uncontested.

Voters were feeling generous as requests from social service agencies and various nonprofits, totaling just over $40,000, all passed by large or overwhelming margins. A few, like a $905 ask from the Northeastern Vermont Develop-ment Association and a $500 outlay to the Northwoods Stewardship Center, seemed to cause consternation for some voters, but still found favor.

Voters OKed separate requests to use money from the town’s 2021 Good Neighbor Fund to establish a town infrastructure and equipment fund ($12,000), give $7,000 to the conservation commission and $6,000 to the community children’s center, and spend $3,000 to explore creation of a Craftsbury village master plan.

The 13 candidates for public office listed on the Elmore town meeting warning were all elected, from moderator Jon Gailmor to selectboard member Glenn Schwartz and town clerk, treasurer and trustee of public funds Sharon Draper. There were no contested races this year.

For the selectboard, Gary Circosta ran unopposed, while in the race for the 2-year seat, Tracy Collier handily beat challenger Mike Sardina, 180-54. The only other contested town race was second constable, where Mark Snyder beat Robert Young, 142-73.

Voters were split Tuesday on how much power to turn over to Greensboro’s selectboard. By overwhelming margins, the board going forward has the authority to appoint a town treasurer (230-28) and constables (224-40). But, voters rejected plans to vote on all open elected positions (140-120) and future bylaw and ordinance changes (134-126) at the ballot box rather than the floor of traditional town meeting, when it returns.

Greensboro voters overwhelming passed a municipal budget of $1.6 million, spending for a capital and highway equipment funds, service-related outlays totaling about $35,000, $25,000 for the Greensboro Free Library, just under $15,000 for the Hardwick Rescue Squad, $25,000 to the Greensboro Nursing Home and $10,500 to the Craftsbury Community Care Center.

Hyde Park voters said yes to everything on the ballot this year and turned over one of the selectboard seats to a new person.

Chasity Fagnant unseated incumbent Roger Audet as he tried for another go at a three-year term on the board, on a vote of 195-123.

Another popular contest, the one-year selectboard term, had three contenders, and incumbent David Gagnier narrowly held on to his seat, gathering 114 votes, compared to challengers Savannah Droney (106) and Ally Judkins (89).

In the only other contested race, for cemetery commissioner, Sarrah Patch beat Bonnie Blaisdell, 155-131.

The town’s $2.74 million municipal budget was approved, 251-77. So were separate appropriations for a few local agencies: $2,000 for the North Central Vermont Recovery Center, $750 for Salvation Farms and $500 for Vermont Family Network.

And, since it’s famously one of life’s only certain things, voters agreed to pay their taxes in four installments: Aug. 31 and Nov. 15 this year, and Feb. 15 and May 16 next year.

Johnson voters are open to the idea of retail cannabis operations in the town, when and if such things are allowed by the state.

By a measure of 447-394, voters approved the establishment of retail spots and approved giving licensees the authority to act as a local cannabis control commission, when the time comes.

A total of 884 votes were cast in Johnson, which gave the town some of the most robust Town Meeting Day in-person activity. According to town clerk Rosemary Audibert, there were about 550 absentee ballots sent in prior to that.

In other ballot action, voters approved the $3.07 million town budget, of which $1.91 million will come from property taxes, voting 584-240 in favor.

Voters also approved five separate appropriations for various local agencies, totaling just under $15,000. Those were: $10,338 for Lamoille Home Health and Hospice, $2,000 for the North Central Vermont Recovery Center, $1,320 for the Clarina Howard Nichols Center, $700 for Salvation Farms and $500 for the Red Cross.

Other officials running unopposed and elected or re-elected were: moderator David Williams, who was also elected grand juror and agent to prosecute and defend suits; auditor Louise Cross, tax collector and trustee of public money Rosemary Audibert; and two representatives to the Lamoille North school board, Angela Lamell and Mark Nielsen.

In nonbinding business, voters agreed to have the selectboard and village trustees enter discussions about merging the two entities. They were also just fine with the current local laws governing ATV use, defeating a suggestion to repeal the ordinance and to undertake an evaluation of their impacts on the environment.

For all intents and purposes, they took care of business before the annual meeting day — 1,458 eligible Morristown voters exercised their civic duty this year, and all but 132 of them did so before Tuesday.

Roughly a dozen people an hour came to the polls, the rest having mailed their ballots in, making up 32 percent of an overall 35-percent voter turnout.

An all-Australian ballot eliminated opportunity for voters to directly affect spending measures, but everything was passed — with some end numbers noticeably close.

• The town budget of $7.3 million was passed overwhelmingly, 1,027-352, as were largely de rigueur measures establishing a rainy-day fund for surplus money and setting Nov. 15 and May 16, 2022 as tax collection due dates.

• Voters authorized raising taxes one cent on the grand list, applying that to a capital equipment fund for the fire department in a 1,090-332 landslide.

• Voters also approved one-cent tax hikes for a similar fund for the highway department and a half-cent increase for a repair and maintenance fund for the Noyes House Museum.

• Elected without opposition: moderator Shap Smith, first constable Eric Dodge, second constable Garth Christensen and lister Duane Sprague. Lucas Peterson was the only person on the ballot seeking one of two terms on the library board of trustees. Peterson will be joined by Kate Lamb, who secured enough write-in votes to put her on the board.

Wolcott voters were generally in the mood to say “yes” Tuesday, except for Wolcott Elementary. Voters shot down the $5,154,519 school budget 138 to 91. Spending went up under the proposed budget by nearly 7 percent.

Of 1,190 registered voters in Wolcott, 232 participated in annual meeting. One less voter cast a ballot in the school district meeting, both held Tuesday by Australian ballot.

Jon Hester Ingram was elected moderator for both the school district and town. He was unchallenged.

Unopposed, Richard Lee won reelection to the selectboard for a 1-year term.

Elliot Waring won a 3-year school board seat. Kurt Billings, also unopposed, retained his seat for a 3-year term. New board member Allen Carpenter handily won the 2-year seat on the board.

Other office seekers, all unopposed, won their seats.

Voters decisively affirmed continuing to pay the Lamoille County Sheriffs Department for police and dispatch services. Social service spending totaling $15,260 also easily passed, 189-39. Seven separate items, from support for the local animal shelter to the area recovery center, all passed with wide margins, and accounted for another $4,000 in spending.

Voters rejected repeal of an ordinance allowing the town to regulate solid waste disposal and the outdoor storage of junk and junk vehicles, 140 to 85.

Only 48 people showed up to cast their vote at the Eden Town Meeting Tuesday, partly because the usual March date was postponed in favor of hosting an in-person gathering.