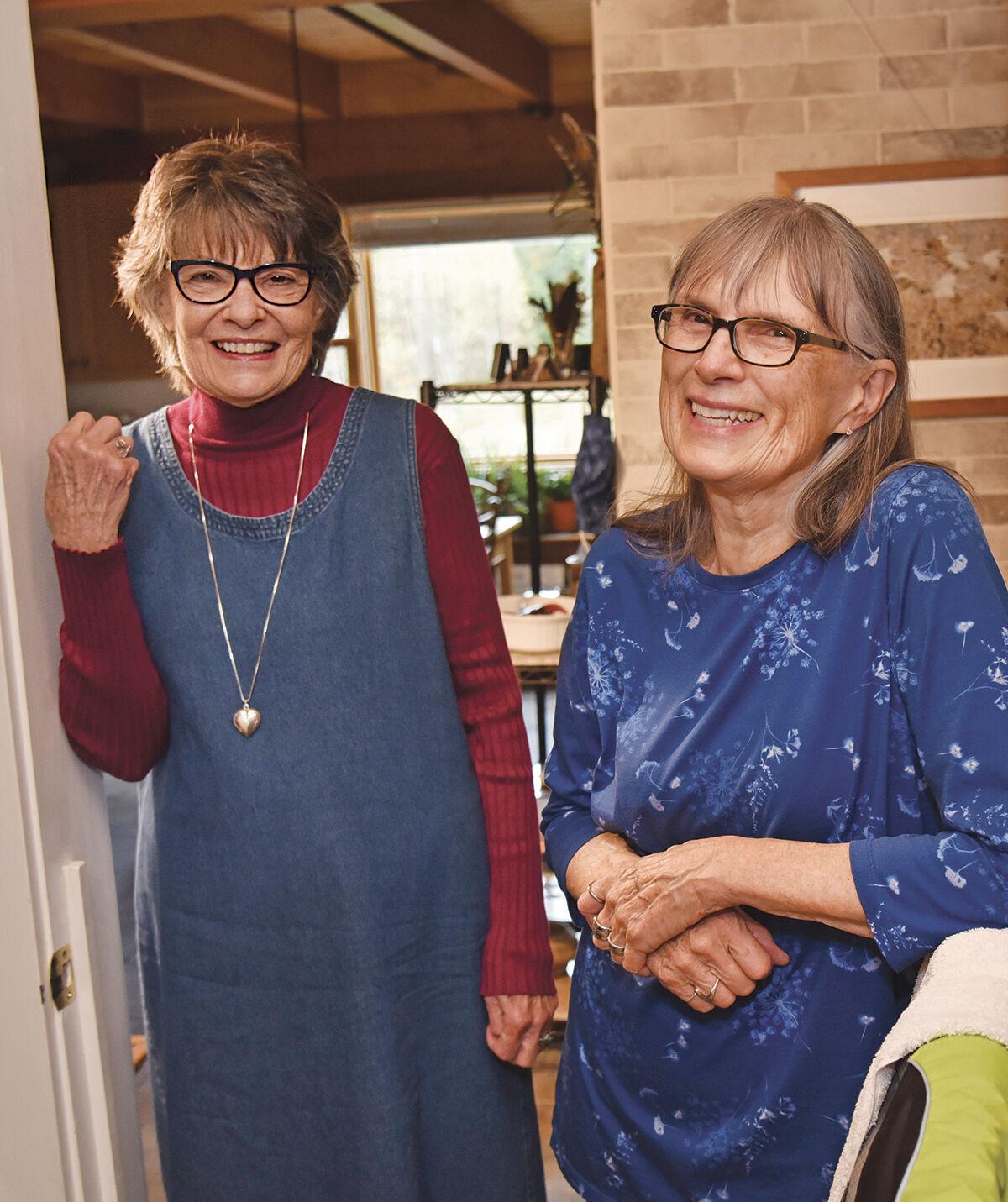 Linda Cannon-Huffman and Maxine Adams are two death doulas who happen to live around the corner from each other in Hyde Park. They met by chance after Cannon-Huffman gave a talk on end-of-life planning this summer. 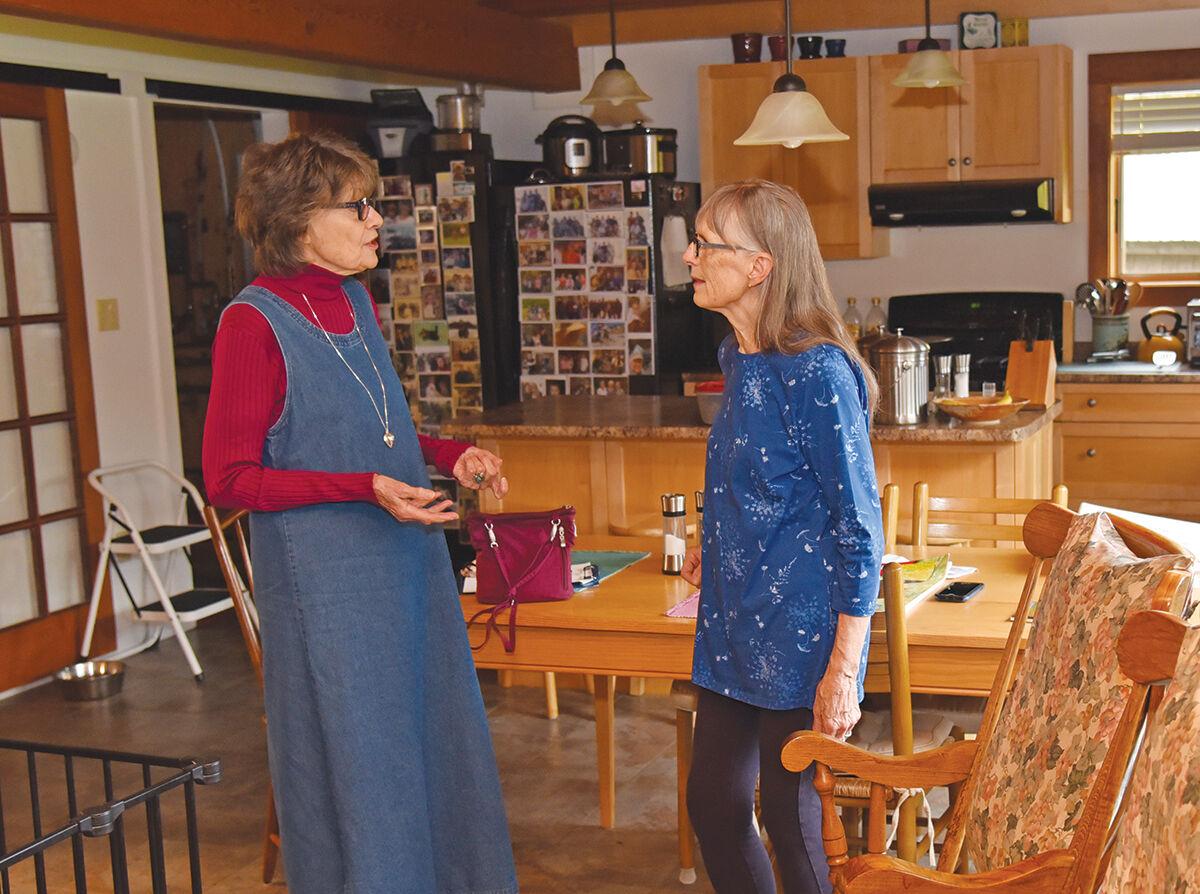 Linda Cannon-Huffman and Maxine Adams joined together to give a talk on end-of-life planning at Morristown Centennial Library this week.

Linda Cannon-Huffman and Maxine Adams are two death doulas who happen to live around the corner from each other in Hyde Park. They met by chance after Cannon-Huffman gave a talk on end-of-life planning this summer.

Linda Cannon-Huffman and Maxine Adams joined together to give a talk on end-of-life planning at Morristown Centennial Library this week.

A strong, honey-sweet Southern twang rings through Linda Cannon-Huffman’s voice, a remnant of her childhood in South Carolina. Red and gold leaves fall softly from trees looming overhead as she leans back in a chair outside her Hyde Park home.

This is the perfect time to talk about death, she said, gesturing to the foliage and balding trees.

As a death doula, Cannon-Huffman holds a friendly reverence for that final exit; an appreciation she’s grown for 15 years when she first decided to help people and their loved ones through death.

Not everyone shares her feelings toward death — nor her light humor — partly due to what she described as the institutionalization and commercialization that death has undergone in the last century. But in recent years, she’s noticed a resurging interest in end-of-life midwifery, which often works collaboratively with existing hospice and nursing home staff to offer more emotional and spiritual supports.

Maxine Adams, who happens to live around the corner from Cannon-Huffman, began a certificate program at the University of Vermont medical college to become an end-of-life doula during the pandemic.

Both women seem to greet death like something dear. Both have sat vigil with a parent as they died, and both hope that, as people learn more about death doulas, the death planning process, and in turn, life, they can come to better appreciate the sacredness of it all.

What is a death doula?

Like birth doulas, who don’t offer strict medical care but emotionally and practical support bringing babies into the world, a death doula, or end-of-life doula, offers an array of support services to help people as they die and the loved ones they leave behind.

What kind of supports all depends on the person, said Cannon-Huffman. It could mean helping with the mountain of paperwork that seems to follow death around or helping a family recognize signs of approaching death or process their grief. It could mean holding the person’s hand, massaging their feet or reading poetry. Sometimes death doulas can help with final wishes, Cannon-Huffman said.

Some people want specific flowers in their room, certain music playing or a special text to be read.

“I think there’s a beautiful, spiritual component to death midwifery now. Not that it’s something that you force on the dying person. The dying person is the one who you’re the advocate for,” she said, adding that the work is non-denominational.

Doulas charge for their services, and they often work collaboratively with care provided by family and friends, hospice and medical professionals, according to the University of Vermont. This can happen in hospitals, senior living facilities and at home.

Doulas are also knowledgeable about arrangements after death if that help is needed. Some of what Cannon-Huffman has done before and during the pandemic, as her in-person doula work mostly halted, is give educational talks on end-of-life planning, including arrangements for before and after death.

At a session at the Sterling Park Senior Living Center a few months ago, she discussed the various paperwork to fill out as folks grow older — an advanced directive, a living will, an estate plan, a health care proxy, a ladybird deed. Who will take care of the pets when you’re gone? What about that box of old letters you don’t want anyone to read? What would you like your obituary to say?

Some of the preparation is “pure drudgery,” she said at the talk. “Some thought provoking, some scary.” But she encouraged folks to start preparations to have a more peaceful death later, as many of the preparations are not only for the dying person, but for remaining loved ones.

“Preparing for death doesn’t mean you’re inviting it. It means you’re opening up space around it; space to see choices we have now before death narrows choices.”

“Preparing for death doesn’t mean you’re inviting it. It means you’re opening up space around it; space to see choices we have now before death narrows choices,” she said.

For both Cannon-Huffman and Adams, sitting vigil is at the core of being a death doula.

In 2015, Adams sat with her mother, who had come to live with Adams as her memory rapidly deteriorated.

“All of our siblings were out in the living room, and we were talking. We had just been in there a few seconds ago, and then when we went back five minutes later, she was gone,” Adams recalled. But people should never feel guilty for not being present at the death of their loved one, she said.

Cannon-Huffman sat with her father as he died 22 years ago. That process, which made her wonder what more she could do for her father and family, set her on the death doula path. It also revealed some of the mysterious aspects of death noted by Adams.

“He was in the final stage. I knew he was going but it was taking a while. I got up to go to the bathroom. When I came back, he was gone. I had an aunt that I was sitting with. I went to sleep that night and when I woke up, she was gone,” she said. “I have been told — I don’t know if it’s true, but I choose to believe that it is — that sometimes they wait until the loved one is not around or is asleep to leave because it’s easier on the loved one.”

It was a privilege to sit with her loved ones as they died, Cannon-Huffman recalled. After those experiences as a young adult, she wondered what more she could do.

“It started with the feeling that death is sacred,” Cannon-Huffman said. She followed that feeling to take courses at the University of Georgia on end-of-life care and hospice. She also received a master’s degree in public health education.

Adams started the University of Vermont end-of-life doula course, which took eight weeks and ends with a professional certificate, because of her experience working with older people as a social worker with SASH, Support and Services at Home.

Through her career, Adams saw the dire need of many people at the end of their lives who need support, who don’t have family living nearby or haven’t handled final preparations. She also holds certifications to be an elder care manager and has taken courses to work in hospice.

Death is a hard subject for people to talk about, both women agreed. Perhaps it’s fear of the unknown, or the way both birth and death have been somewhat sanitized through years of institutionalization, they wondered.

“The sad part of not thinking about it too is that if you do contemplate death — boy, life is so precious. I mean, if you really think about, you know: I am gonna die and I don’t know when, I mean, I could get hit by a truck and be gone tomorrow. Blue sky, beautiful fallen leaves — there’s so much preciousness to life,” Cannon-Huffman said.

Adams added that, one of the main concepts she learned is to “lean into pain and lean into grief. Let it happen. Don’t try to cover it up or suppress it,” she said.

A death positivity movement seems to be turning that tide in the United States and other countries. The movement, made popular by writer and funeral director Caitlin Doughty, is about “making death a part of your life,” according to the Order of the Good Death, which Doughty founded as a resource.

According to the Order: “People who are death positive believe that it is not morbid or taboo to speak openly about death. They see honest conversations about death and dying as the cornerstone of a healthy society.”

Death cafes, where you sit down with tea and cake and openly talk about death with others, are another open look at the end of life, though many have halted during the pandemic, Adams added.

“Death is sacred, and it’s such an honor to be with someone, they don’t even have to die while you’re there — I think it can be very draining but it’s very worth it,” Cannon-Huffman said.

Both women have thought about their own deaths, of course. Adams is interested in legacy and has been coordinating writing the story of her life with her two sisters, a tradition among the women in her family. She said she’s picking up tips in her coursework and burgeoning work as a death doula — “figure out how I’m going to do it with style,” she said laughing.

That’s another thing the women have in common — a sense of humor and lightness.

“Death is a long process, and it can be hard work and it can be messy,” Cannon-Huffman said. “I would just love for people not to be so afraid to talk about it and to not be afraid of death.”