Skip to main content
You are the owner of this article.
Edit Article Add New Article
You have permission to edit this article.
Edit
Home
News
Sports
Opinion
Community
SCENE
Calendar
Special Publications
Marketplace
Classifieds
Contact Us
1 of 7 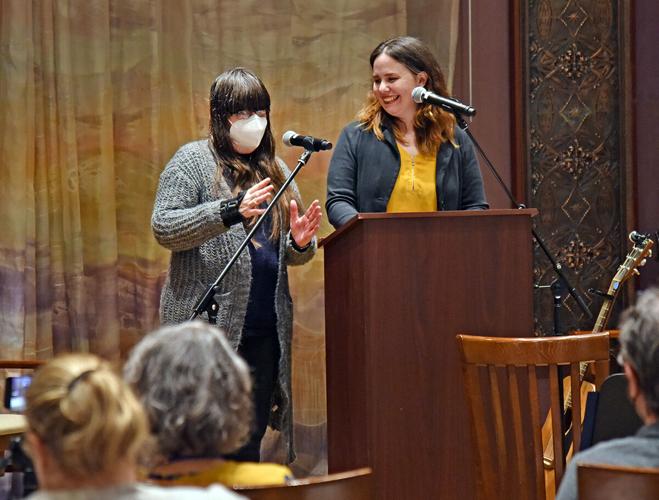 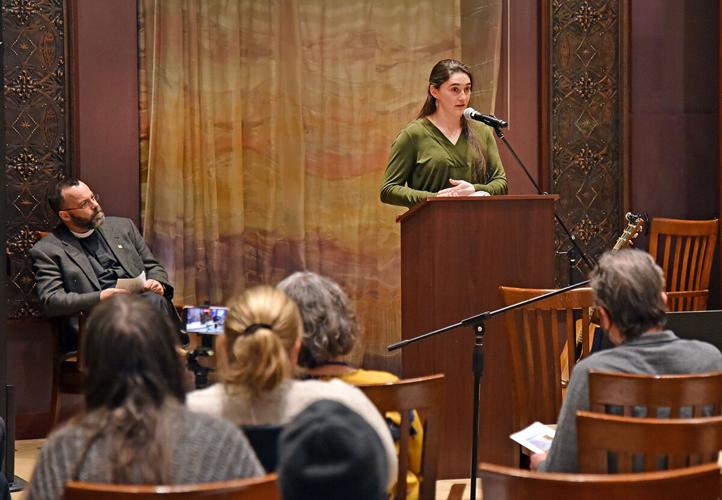 Even Rep. Lucy Rogers, D-Waterville, with her connections in the Statehouse and her deep roots in the Waterville and Cambridge area, has found herself struggling to find a place of her own. 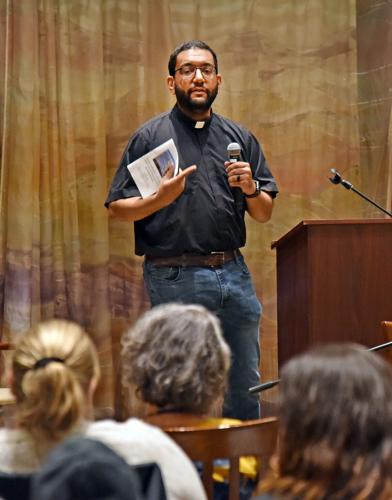 Rev. Devon Thomas — who fellow faith leaders refer to as “Rev Dev” — speaks at a housing and homelessness awareness event last week. Thomas said if Vermont were one of The Avengers, it would be Spiderman, “the friendly neighborhood state.” Thomas is pastor for congregations in Bakersfield, Jeffersonville and Hyde Park. 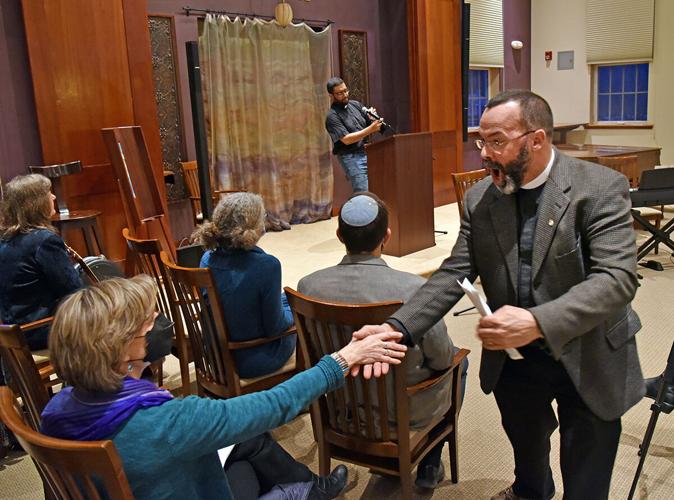 Sue Minter, executive director of Capstone Community Action, and Rick Swanson (aka “Father Rick”), from St. John's in the Mountains. 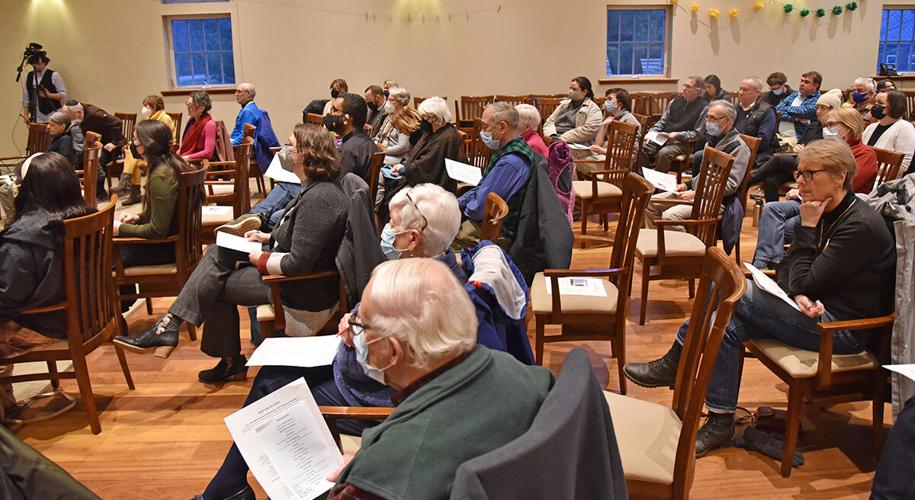 The event, held last Wednesday at the Jewish Community Center of Greater Stowe, was packed with speakers who talked about how the housing crunch is affecting more people than ever. 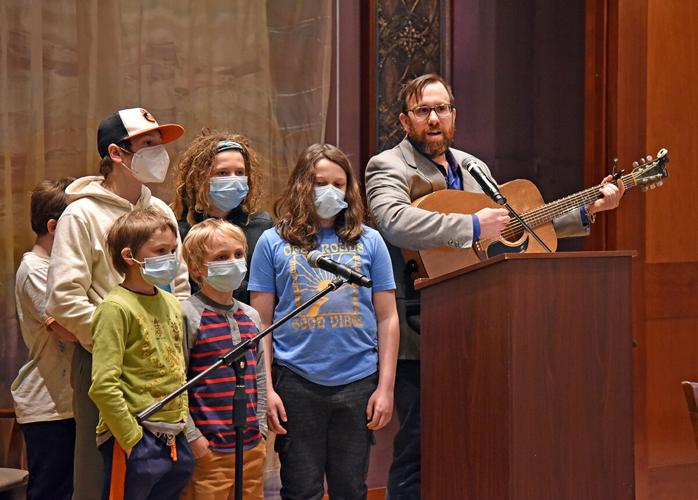 Rabbi David Fainsilber, accompanied by some kids on instruments and a synagogue full of people from local faith and secular communities, kicks off a Passover/Easter “teach-in” on housing and homelessness. 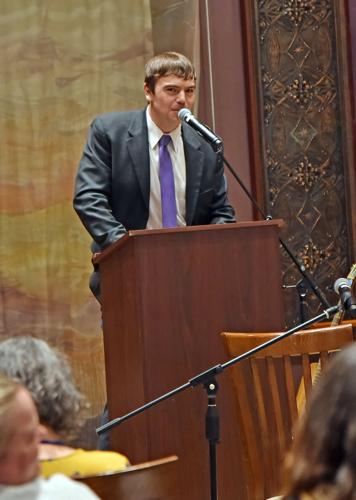 Guest speakers at last week’s housing and homelessness summit in Stowe included Will Eberle, field director for the Agency of Human Services, who grew up in various houseless situations.

Rev. Devon Thomas — who fellow faith leaders refer to as “Rev Dev” — speaks at a housing and homelessness awareness event last week. Thomas said if Vermont were one of The Avengers, it would be Spiderman, “the friendly neighborhood state.” Thomas is pastor for congregations in Bakersfield, Jeffersonville and Hyde Park.

The event, held last Wednesday at the Jewish Community Center of Greater Stowe, was packed with speakers who talked about how the housing crunch is affecting more people than ever.

Rabbi David Fainsilber, accompanied by some kids on instruments and a synagogue full of people from local faith and secular communities, kicks off a Passover/Easter “teach-in” on housing and homelessness.

Wendy, a longtime Vermont resident, found herself without permanent housing suddenly last fall when her then-boyfriend didn’t tell the landlord she was living with him.

Wendy, who did not share her last name, has been staying in the Hyde Park warming shelter run by Lamoille Community House since it opened for the season Nov. 15.

The March 30 Passover/Easter Interfaith Teach-In on Housing and Homelessness at the Jewish Community of Greater Stowe, which includes several speakers and musical interludes, is available for streaming at bit.ly/3KaN4Ci.

At first, she stayed in her car in the town parking lot near the Wolcott post office from Friday night through Monday morning, before someone at the Morristown office of vocational rehabilitation told her about the shelter in Hyde Park. She was met outside the shelter by a Community House volunteer who helped her fill out some paperwork, and then she moved in.

“I was so tickled pink not to sleep in my car,” Wendy said. “The next day, I get up and met another one (of the volunteers) and I said, ‘Can I please take a shower after four days? And she says, ‘Go right ahead.’”

Help, and then help more

Wendy was one of several speakers last week at an event at the Jewish Community Center of Greater Stowe who shared stories of homelessness and housing insecurity, stories as diverse as the people telling them, but with new voices in the mix, as even the upwardly mobile flocking to Vermont can’t find a place to live.

Amid jacked up real estate prices and a severe inventory shortage, there were 61 households in Lamoille County — 102 people, including 20 children — without a home this winter.

Those are the numbers that Sue Minter, executive director of Capstone Community Action, shared at the event. Those figures don’t include the roughly 1,500 people statewide currently living in hotels that opened their doors during the pandemic.

Minter said Capstone and the other active and like-minded social service agencies in Lamoille County provide “a village of services” for people.

“Our focus is twofold: Help people in emergency, help them in their crisis, whether it’s housing, food or heat. Then help give them the tools to rise out of poverty,” Minter said. “Unfortunately, my friends, the war rages on.”

Kim Anetsberger, the executive director of Lamoille Community House, which runs the warming shelter where Wendy and others live, said it’s all about community.

“We can’t have a strong community if we’re not receiving contributions from every member,” Anetsberger said. “We can’t receive contributions from people if they don’t have their basic needs met, and they aren’t able to live their lives to their fullest.”

Life to the fullest

When it comes to bureaucrats, even well-meaning ones seeking to end homelessness, they will often rely on data and well-chosen anecdotes from the people closest to the situation to deliver their messages. Will Eberle, field services director with the Vermont Agency of Human Services and the event’s keynote speaker, just told a brief story of his life.

In 15 minutes, Eberle related a memoir — in turns humorous and tragic — hitting classic hobo and hippie notes with modern mentions of drug use and food stamps.

Eberle spoke of feeling neglected and abandoned by the adults in his life, being abused and traumatized, dropping out of high school and running away from home; living out of a pickup truck and escaping the doldrums of real life with whatever 8-hour shifts banging nails and laying shingles he could string together; clearing away piles of used heroin needles to sleep under a bridge in Portland, Maine; searching for food in a Montreal trash bin and sticking his hand in human excrement; sleeping in a tube slide on a playground in a desert town in eastern Oregon only to be awakened by a kid using the slide the next morning; having his tent confiscated by the Vermont forest service; holding up signs on highway medians to get enough money to eat that day.

Today, Eberle has a master’s degree, a wife, kids and a home.

“I’m in charge at the government building where I went to get food stamps when I was sleeping between my Sawzall and angle grinder in the back of my truck,” he said.

Rep. Lucy Rogers, D-Waterville, might not seem like the face of houselessness. The wunderkind legislator has been seen as a rising star in Vermont politics since she was first elected at 23 years old in 2018.

But, even Rogers, with her connections in the Statehouse and her deep roots in the Waterville and Cambridge area, has found herself struggling to find a place of her own.

In February 2020, she was about to put an offer down on her first home, but that place came off the market, and right after that, the pandemic hit, and prices skyrocketed.

Buying a house wasn’t the worst of Rogers’s housing woes. Even with her connections and knowledge of the area she spent innumerable months actively looking for a place to rent. Just herself, no pets, no frills. And, until recently, no luck.

Self-aware of her privilege, Rogers said she wrestled with whether to tell her story, but ultimately decided to lean into it for pragmatic reasons.

Jim Lovinsky, executive director of the Lamoille Housing Partnership, has long been paying attention, and this year is a marquee one for the organization, as two major projects add a combined 40 affordable housing units in Morrisville and Stowe — tenants have already started moving into the River Bend apartments in Stowe, and similar move-ins at Village Center in Morrisville should happen soon.

But, he said, while more agile organizations like Capstone and larger, umbrella groups have evolved over the past few years to quickly provide services in emergencies, affordable housing developers “work at a snail’s pace,” comparatively.

Lovinsky said factors — only exacerbated by the pandemic — include income disparities, low vacancy rates, a backlog of housing construction projects, sharply increasing housing prices and a trend for people to convert long-term apartments into short-term seasonal rentals or weekend Airbnbs.

Eberle said it is tempting to point to him as a self-made, bootstrapping “Horatio Alger in the flesh,” and said he did work hard to get himself out of homelessness. But he listed a litany of people who helped him out along the way and suggested everyone else be like them.

“Without all these people and so many more working together to help me reach my potential, I’d still be under a bridge somewhere, best case scenario,” he said.

Back at the Hyde Park shelter, Wendy said that temporary existence isn’t easy, especially when some of the guests don’t get along and things get volatile. She really wants to get a one-bedroom place and get her tiger cat back.

But there are happy times in the shelter, too, she said. She enjoys meeting the other guests and they sometimes watch TV or color together. Then there are the dance parties.

“One night we got dancing to a song and Miss Kim here happened to come in and she was, ‘What are you doing?’ We’re like, ‘It’s party night,’ and she started dancing too, and that was awesome,” Wendy said. “You survive because that’s what you need to do, and you do what you need to do to make yourself happy.”

Teach-In on Housing and Homelessness